From Heartache to Heartwarming Friendship: The Story Behind the Adorable Handholding Chimps

By Jane Graham, Save the Chimps 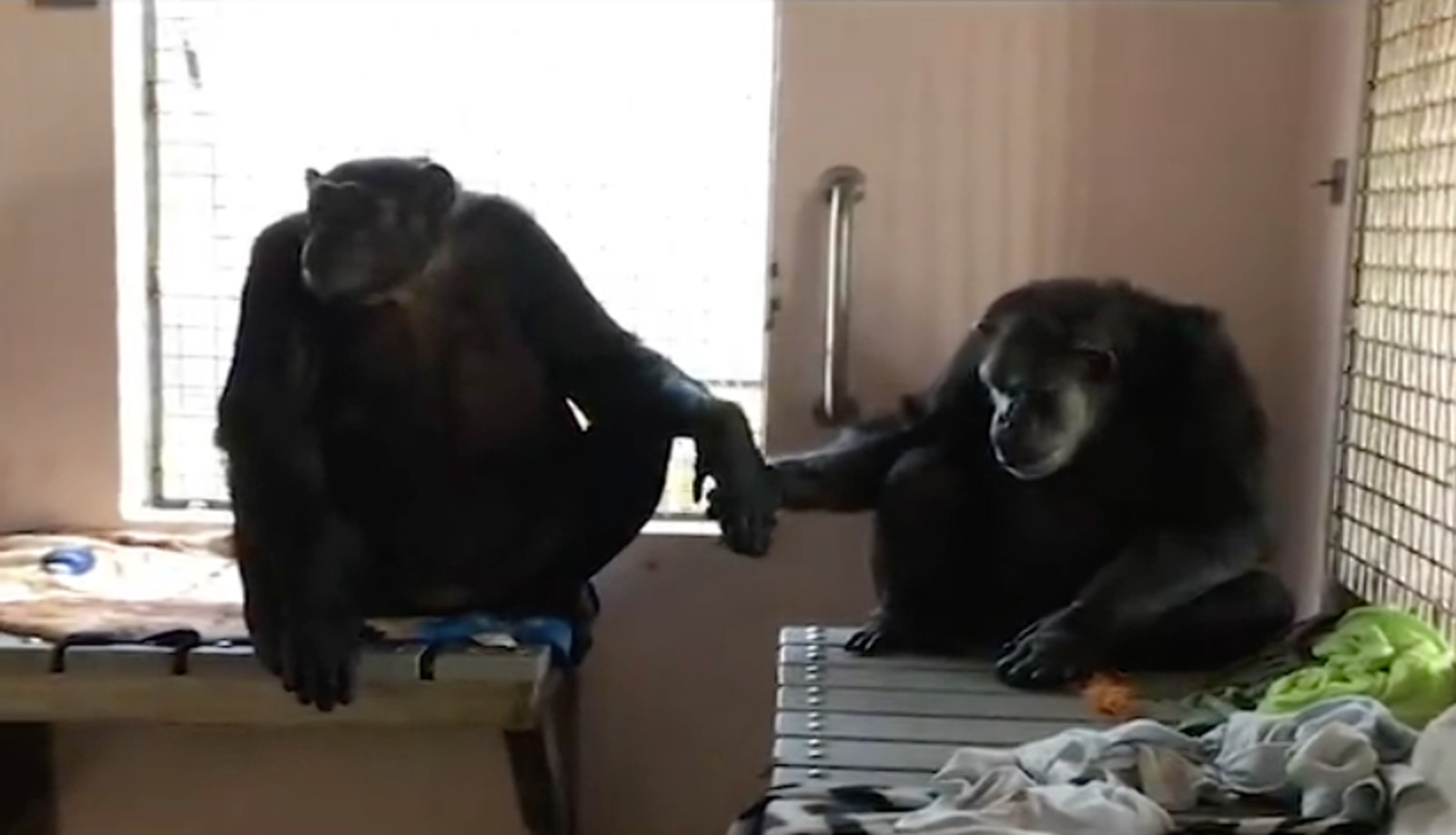 You probably have seen the heartwarming viral video of chimps Terry and Jeannie at Save the Chimps, holding hands and refusing to let go. The story behind the video is even sweeter.

Terry the chimp, who today has a penchant for oranges, soccer balls, and cuddling his friend Jeannie, did not always have such a comfortable and happy life. As a young chimp, Terry was trained as an entertainment chimp for the Ice Capades but never performed. When Terry was still very young, his trainer moved Terry to the Las Vegas Zoo with another chimp, Simon. Simon died soon after arrival, and Terry lived 18 years without any contact to other chimpanzees. Like humans, (in fact sharing 98.6 percent of our DNA), chimpanzees are naturally social beings, and they usually learn social interaction in their youth. The solitude left emotional and behavioral scars on Terry for years to come.

When the Las Vegas Zoo was shut down by the USDA in 2013, the North American Primate Sanctuary Alliance urgently contacted Save the Chimps, the world’s largest chimpanzee sanctuary to adopt Terry. When Terry first arrived at Save the Chimps, he was very afraid of other chimpanzees. Through the guidance of Save the Chimps’ veterinarian Dr. Jocelyn Bezner and devoted staff and volunteers, Terry has made friends over the last several years.

According to Dr. Bezner, growing up in confinement meant Terry was not socialized, and even though he looked like a chimpanzee, he was not fluent in chimpanzee behavior. He literally turned his back on other chimpanzees.

It takes patience, persistence, and a sense of humor to “introduce” a chimp like Terry into a chimpanzee group. At Save the Chimps, the 250 plus chimpanzee residents are grouped into large families on twelve separate three-acre islands. Like humans, different chimp families have different dynamics with a wide cast of characters. It was important to find the right fit for this new addition.

Because of his history of solitary confinement and social anxiety, Terry was first housed in the special needs group. Within three weeks at Save the Chimps, Terry met Indie, a lady chimp unfazed when Terry would turn his back on her.

Eventually, Terry would allow Indie to groom him.

Months later, he stepped outside in the sunlight with his friends Indie and Pam.

Over the last few years, Terry has made wonderful progress and has been systematically introduced to the other animals on the Save the Chimps island.

Today, Terry is known for his “love of the ladies,” and Jeannie was the latest beneficiary. Jeannie was born in the wild in 1966 and was subjected to biomedical research.

Dr. Bezner explained that chimp introductions are usually quite involved processes which take careful thought, and are customized based on an individual chimp’s temperament. Sometimes it is easier to introduce chimps one on one and sometimes in groups of two or three. As a social lubricant, (think cocktails and hors d’oeuvres), the Save the Chimps staff and volunteers usually offer some food like a banana or an enrichment toy for the chimps to play with while meeting a new chimp.

Terry is just one example of a special chimp at the remarkable sanctuary Save the Chimps.

Each resident has own their unique story. Many were abused and exploited in biomedical research, the entertainment industry, and the pet trade. Many of these chimps were part of the U.S. Space program or were descended from chimps that were.

After a year-long legal battle with the Air Force, the late Dr. Carole Noon, with the support of Jane Goodall, gained custody of 21 chimpanzees in 1998. She established Save the Chimps as a sanctuary for these animals to live the rest of their years in peace, dignity, and comfort on 150 acres in the Florida sunshine. Since then, the population of rescued chimps has grown to over 250 residents.

Save the Chimps is entirely privately funded, and relies on the help like people like you to sustain them with food, shelter, and provide medical care for these chimpanzees. Most importantly, it is the social companionship and friendship among the chimpanzee families at Save the Chimps that sustains their happiness.

Recently, the National Institute of Health announced they will stop biomedical research on chimpanzees. This means there will be quite a few new retired chimps in need of homes like Save the Chimps. It is now important more than ever to help provide a comfortable, safe, and happy home for our closest relatives to humans.

For more information about Terry and Save the Chimps, explore their website at savethechimps.org. If you would like to make a donation to Terry and his friends, click here.