Spoons Over Bombs: The Most Effective Peace Activism 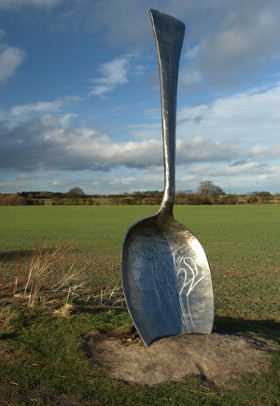 North Korea is again in the news as a dangerous and evil adversary, and the U.S. military is mobilizing in the region, conducting maneuvers clearly designed to provoke and threaten the small country, and there is talk of a possible nuclear exchange, and even of winning such an exchange. The leader is being portrayed in the U.S. media as bellicose and unstable, and the North Korean people as hopelessly indoctrinated and leading dreary lives with little real freedom.

How do we respond to this? It seems to me the most empowering, positive response is first, to look deeply into ourselves and into the pervasive indoctrination in our own culture and upbringing. Second, to question the official stories propagated by our mass media, and third and most essential, to promote peace by living and sharing the vegan message of interconnectedness and compassion for all.

Going vegan? What does that have to do with stopping war? We’ve seen the charade many times by now. The U.S. government demonizes the leader of a country it wants to attack, the media dutifully comply by repeating the official story so that our population sees the target nation as suffering under a brutal dictatorship. This sets the stage for the U.S. military to bomb and destroy their culture under the (supremely ironic) guise of liberating them and protecting the world from a dangerous madman.

Why are we so gullible and easily manipulated into destroying our planet, our economy, and the lives of our children? How can we be repeatedly duped into allowing and even supporting one war after another? It’s obvious these wars only enrich the wealthy elite, cause unfathomable suffering and destruction, and severely erode our rights and well-being on every level.

It is a problem, at is core, of insouciance. We really don’t care enough, it seems, to make an effort to question our own indoctrination, and to liberate ourselves from it. And thus we drift, as Einstein said, “toward unparalleled catastrophe.”

This is why veganism, which is gaining momentum and traction every day, is the greatest hope for our future. Vegan living is essentially the opposite of insouciance, and is concerned with making an effort to increase our capacity for caring, and to care radically, broadly, and where it matters: in our daily lives and choices. We care not just for ourselves and loved ones, and for hungry people and slaughterplant workers, but also include nonhuman animals, ecosystems, wildlife, and the future generations of all beings in our caring, and it’s not just theoretical. We make a determined effort to bring our lives into alignment with our yearning to protect others from needless cruelty, and we are willing to face the inevitable criticism, rejection, and hostility from others because of it.

In order for any of us to go vegan, we are called to an inner journey of first, becoming aware of the fact that we’ve been programmed by every social institution to participate in the routine violence toward animals that characterizes our culture. We become increasingly aware that this is the only reason we are doing it, and that it’s not in our interest to do so. In fact it enslaves us to physical and psychological disease, and to the shallows of life where we stay disconnected from our deeper wisdom, compassion, creativity, and joy. As a population, we enslave countless animals for food and products, and mutilate and murder them in cold blood because we’ve been told to do so by the authorities, and this, more than anything, creates the physical, psychological, spiritual, and cultural devastation and numbing that makes war inevitable.

The second stage in the journey is to inquire into and strive to understand the many repercussions of our relentless mistreatment of animals. When we look carefully, it becomes quite obvious that animal-sourced foods and products not only cause massive destruction to the ecology of the Earth and of our own bodies and psyches, they also indoctrinate us into a culture of exploitation, competition, violence, and privilege. As this becomes clearer to us, and we grow to care about and respect ourselves and others more, then we reach the third stage in vegan living. We change our behavior. Understanding that isn’t demonstrated isn’t authentic understanding, as we all know. These three steps reinforce each other as our vegan journey unfolds. Increasingly, the official stories, which we obediently believed and obeyed, are seen for the gross perversions that they are. We begin to think and feel for ourselves, and to disobey both the internalized and external authorities, and we become dangerous to the status quo of inequity, desensitization and insouciance. We become a force for transformation and healing.

There is no greater gift we can give to ourselves, to animals, to our loved ones, and to our world than the gift of reawakening our heart to its innate power of caring. As we do this, we naturally become more inclusive in our concerns, and vegan living is the expression of the healing power of being as inclusive as possible in our sense of respect and kindness for others. It requires of us that we take the journey of questioning the cultural programming fed us from infancy, and as increasing numbers of us do so and share the joy of newfound health and freedom, and the deep concern we feel for the suffering of others that is so unnecessary, we create the underpinnings of a more conscious culture where peace, freedom, and sustainability are authentically possible.

As we learn to question the official stories about food, we do so about other matters also, and it becomes obvious, to continue the Korea example, that North Korea is no threat to the U.S.; the people and leadership there yearn for peace. Why do we bully and pressure them so cruelly that they must spend enormous resources on weapons to defend themselves from us? The U.S. has divided Korea and kept it divided because it’s in U.S. interests to do so. When I was a Zen monk living in South Korea, it was quite obvious, and also obvious was the complete domination of South Korea by the U.S. government, military, corporations, banks, and even Christian religious organizations. KFC outlets were everywhere. Texas cattlemen were teaching South Koreans how to raise feedlot beef, thereby causing hunger and more inequity in the country. Land that could supply rice and vegetables to whole villages has now been converted to beef production for the wealthy elite in Seoul while farmers have been forced off their land into factories, and rural community life has been decimated.

North Korean people have an eco-footprint that’s a fraction of ours. They live primarily on rice and vegetables. There are no GMOs, no McDonalds, and no way for Exxon or Wal-Mart, Coca-Cola or Tyson, Goldman Sachs or the IMF to exploit the markets, the workers, or the environment there, or to drain their capital or force compliance with the globalist agenda. North Korea is an example of people living outside the control of the banksters and so it’s been either studiously ignored or demonized in the corporate media. We’re told there are large billboards all around the country portraying the face of their ruler. And we shake our heads and think, “Those poor people, living in such an unfree, indoctrinated situation.” And we go about our business, and everywhere we go, there are large billboards portraying the face of our ruler—but we’re used to the billboards and it seems natural, comforting even. Our ruler is the corporate-financial complex and his message is everywhere: “Consume! Buy! And don’t ask questions.”

It is becoming obvious that veganism is the cutting edge of empowered activism and engaged spirituality in our world today. Our confinement to the shallows of living is due primarily to the enormous power of the food trance and the food program that is propagated primarily through our culture’s meal rituals of disconnectedness, domination, and commodification of life. The living frontier of positive spiritual, social, and wellness evolution lies in understanding the enormous ramifications of our food and lifestyle choices, and why it’s essential that we learn how to thrive on plant-based, organic, whole-foods meals, and products and services that are not harmful to animals.

As more of us go vegan and live and spread this transformative message, we create the authentic foundation for lasting peace and freedom in our world today. We will have peace when we are worthy of it. Animals are completely vulnerable in our hands. How do we respond to all this?

When we refuse to obey the orders to disconnect and desensitize ourselves, to pay for killing and slavery, and instead obey the directives of our heart to care, love, and respect the sovereignty and dignity of others, then we are living a vegan life, and we are part of the solution.

The greatest anti-war statement anyone can ever make is to go vegan, understand why, and encourage others to do the same. To protest war, injustice, and environmental devastation, and continue to buy animal-sourced foods and products exposes a fundamental disconnect that renders our efforts merely ironic. Our situation is critical. Please go vegan and encourage others as well. Social transformation starts with the individual, with each of us making an effort to question and dismantle the war machine on our plate.