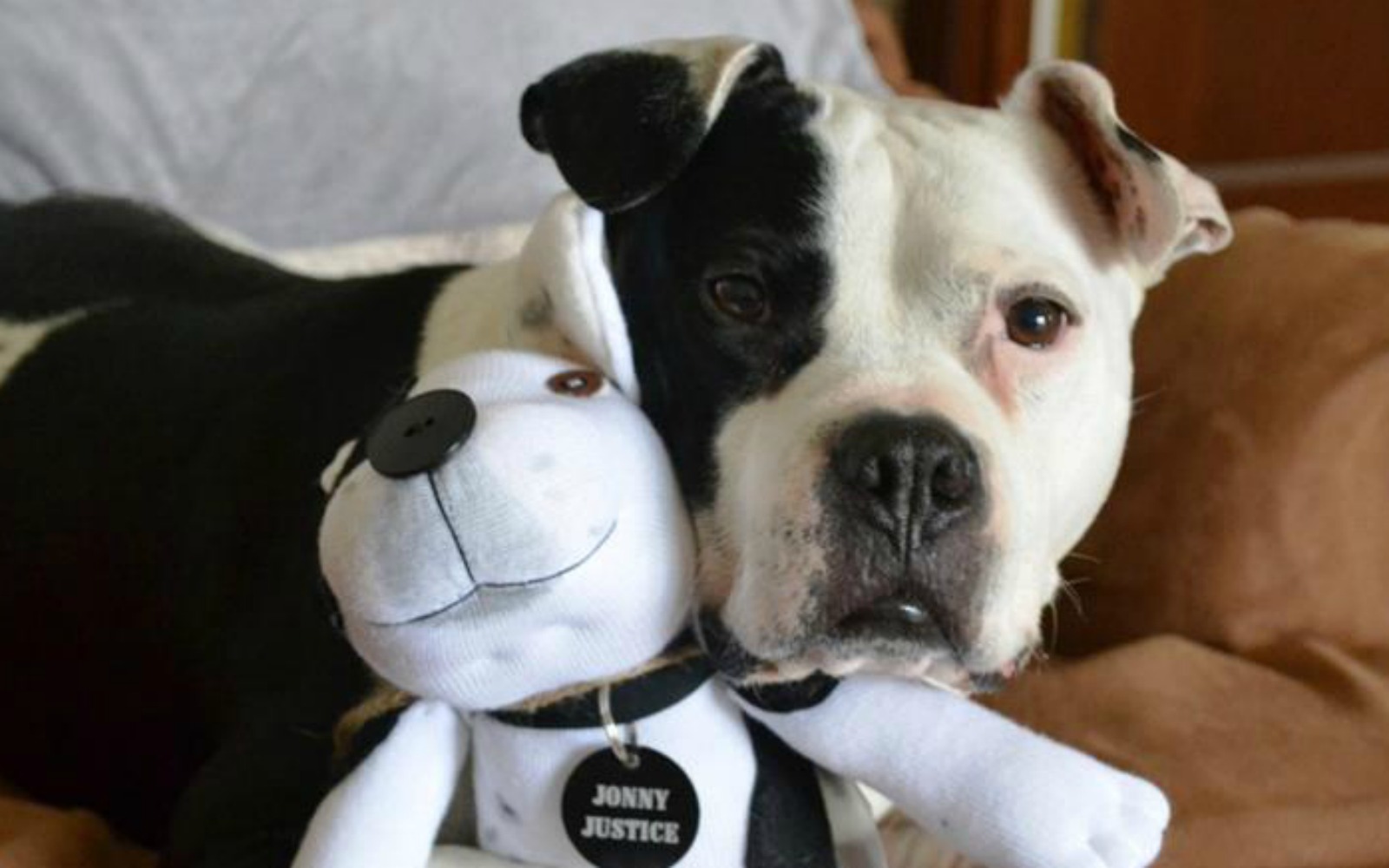 You may never have given it a second thought, but stuffed toys are the unsung heroes of shelter dogs across the country. Every year, six to eight million animals enter U.S. shelters, but only three to four million get adopted. Many wonderful volunteers will take the dogs out for walks and maybe have a few minutes of play time, but at the end of the day, the dogs and cats are alone once again with no human to snuggle with.

In comes the warm, soft stuffed animal. As animal shelters know all too well, stuffed animals can make unlikely companions for lonely animals, who are often looking for something warm to cuddle with. The cuteness is overwhelming, so here are just a few of our favorite pups with their favorite stuffed animals … proving that rescue dogs really are the best!

Lady first came to The Anti-Cruelty Society, back in January of 2017 and was adopted, but unfortunately, she was returned to the shelter in March. But that’s all behind Lady now because she found her people and got to take home her stuffed animal. 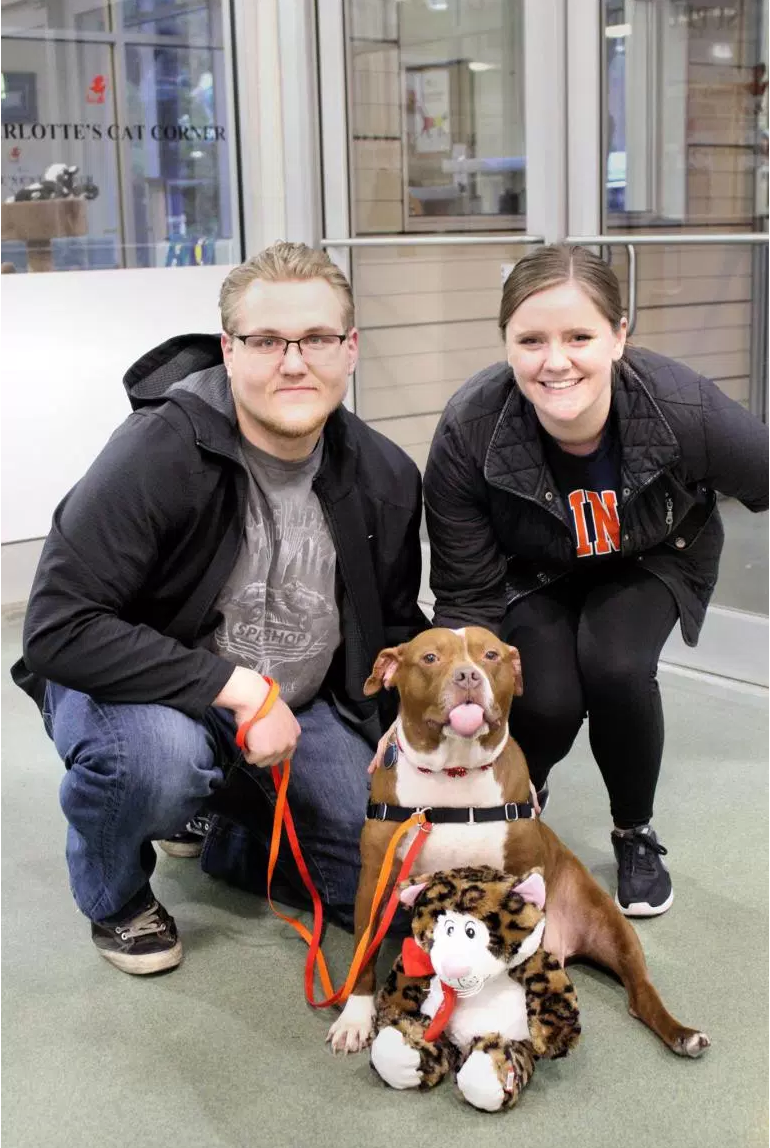 Two-year-old Pit Bull Toby carried his stuffed animal with him everywhere he went at LifeLine’s DeKalb Animal Services. Look at that happy boy! 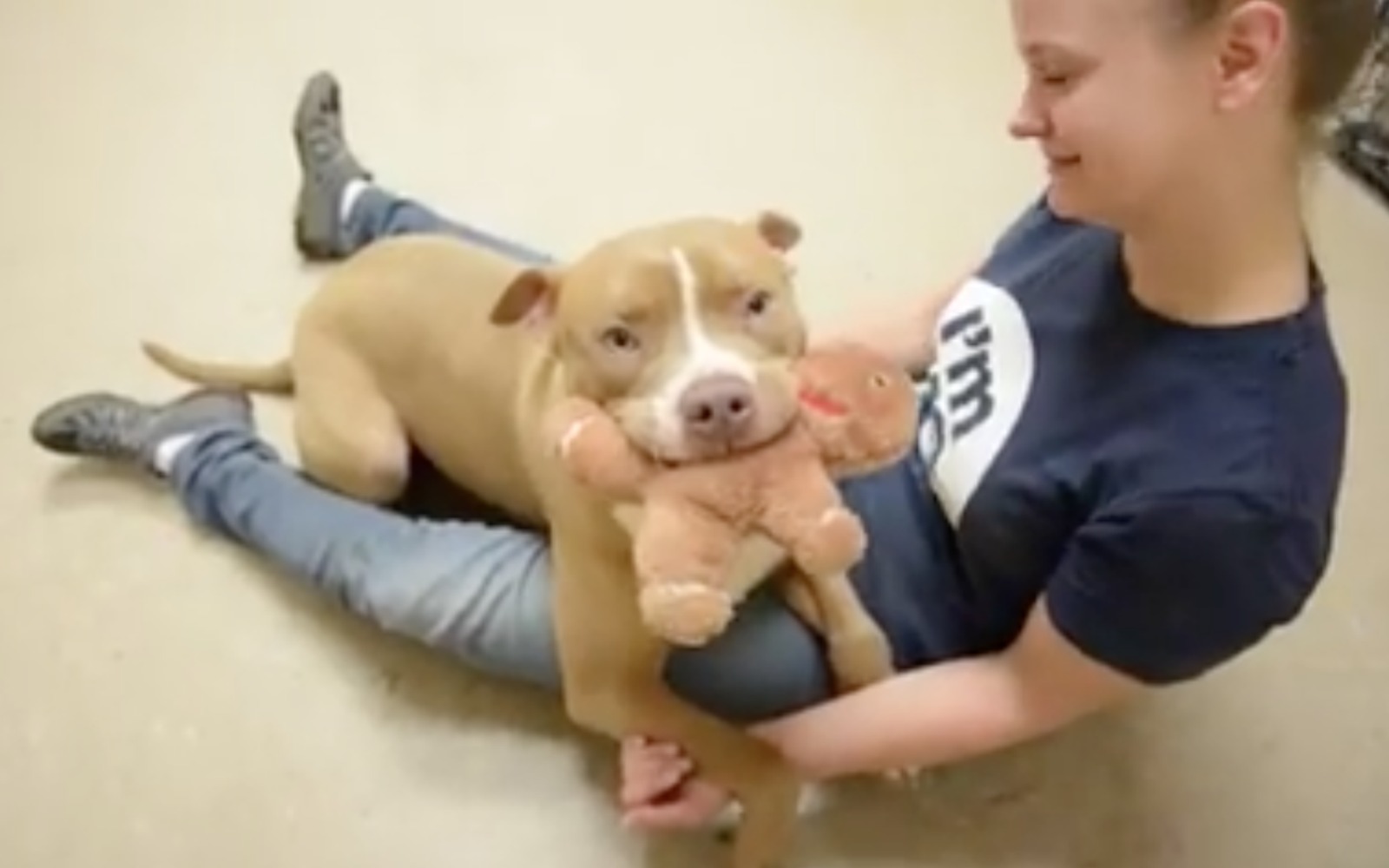 Jonny Justice was rescued from Michael Vick’s dog fighting ring and has a stuffed animal made after him after he won a contest from a toy company! 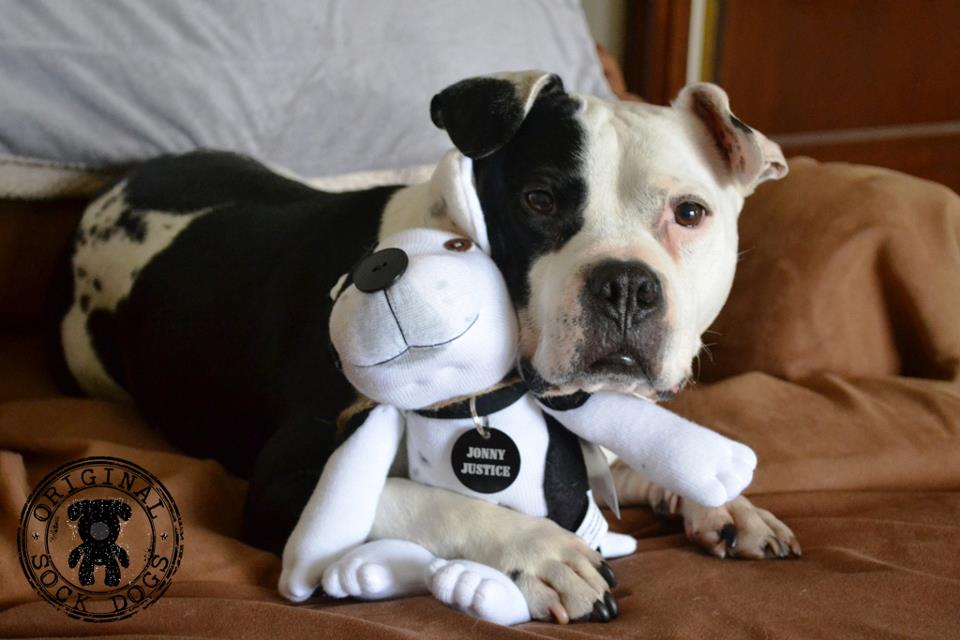 Have a Dog, Will Travel

Shortcake was rescued from the streets of Fresno, California and was suffering from severe mange and a hernia and her stay there was rapidly approaching a fatal ending if she didn’t find an adopter. Luckily, Fresno Bully Rescue came to the rescue. Although they didn’t have space at the time, they couldn’t say no, so they pulled Shortcake from the shelter. Now, Shortcake can’t stop smiling! 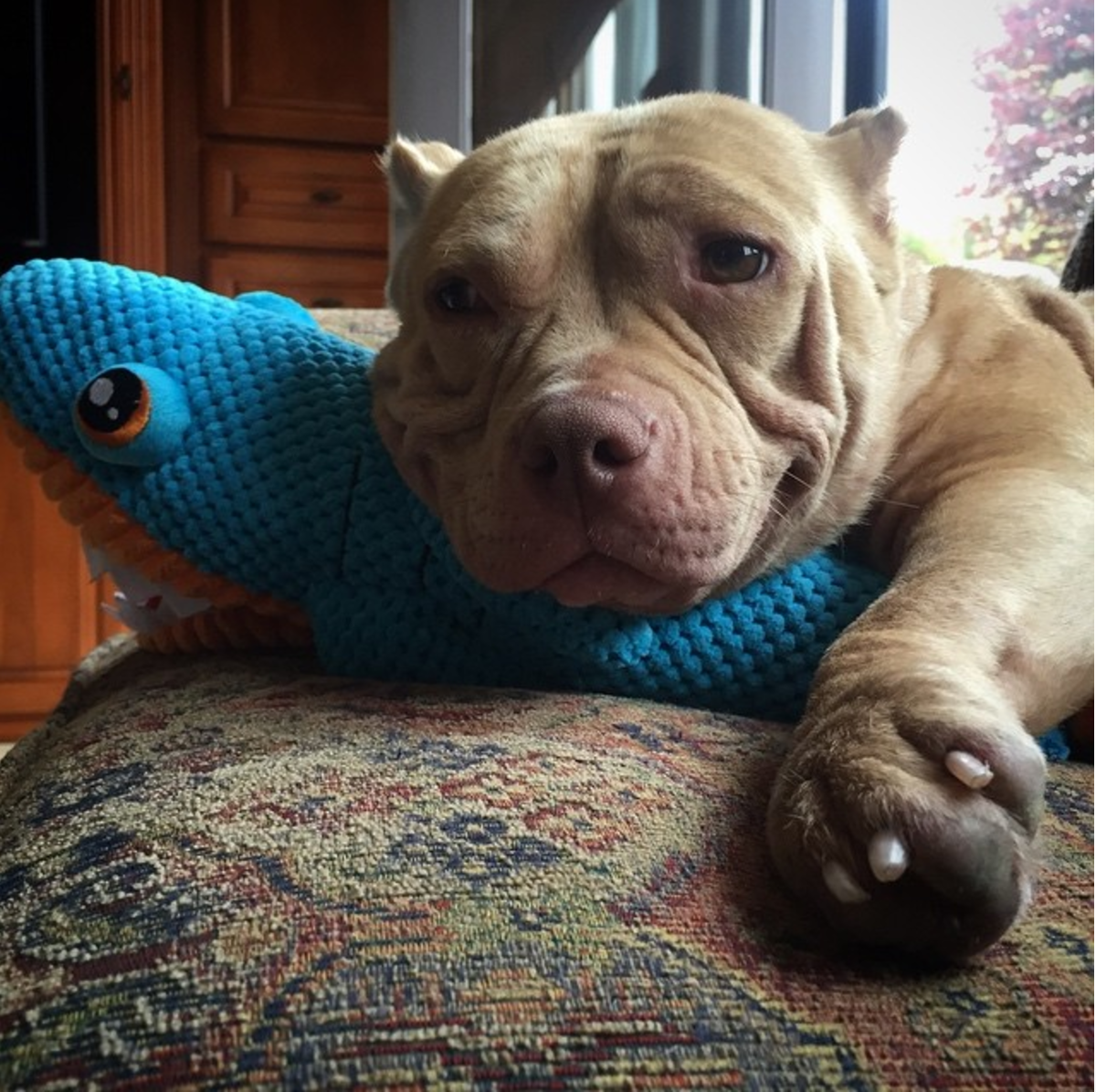 Honey, the German Shepherd puppy was diagnosed with a terminal heart condition. Veterinarians told her guardians she most likely would not live for more than six months. But, for one family, Honey’s health condition was not enough to deter them from bringing her home and giving her the love she deserves, despite the tragic news. Honey just recently turned one and has a whole gaggle of stuffed animals to choose from! 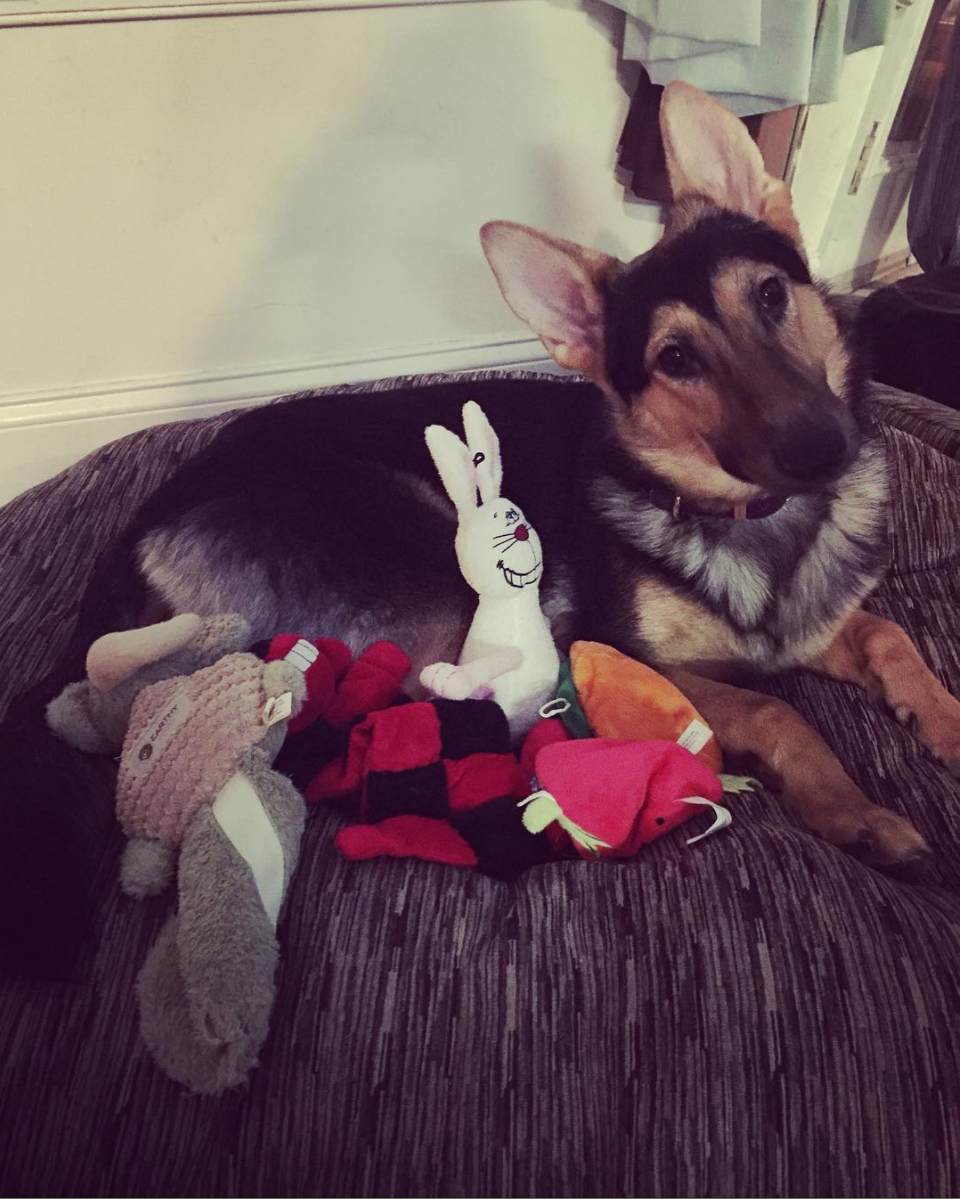 It seems like animals and kids all find comfort in these frumpy creatures. For rescued animals, these stuffed toys become surrogate mothers and provide the constant companionship that’s vital in those first few days – they can make all the difference when life is teetering so uncomfortably close to the edge. And for dogs in shelters, stuffed animals can sometimes be the only means of companionship.

If you’re considering welcoming a four-legged companion into your home, please always adopt and never shop. If you’re unable to adopt, animal shelters could always use more volunteers to help with a variety of tasks, so be sure check out our guide to volunteering!

Lead image source: Have a Dog, Will Travel