Sexism as a Tactic in Animal Rights Advocacy 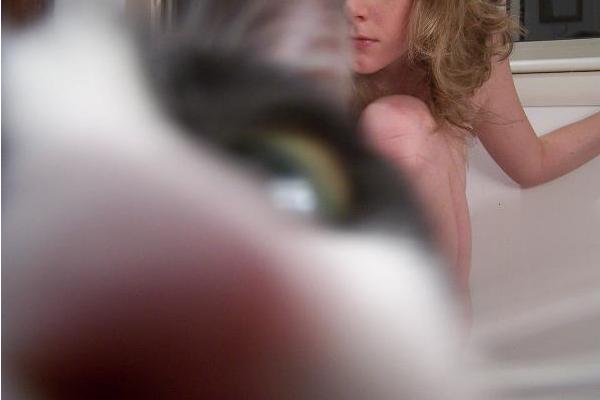 Many are familiar with PETA’s “Naked Campaign” that has disproportionately featured young, thin, attractive women who are either naked or nearly naked to promote various Nonhuman Animal rights causes.  Indeed, the vast majority of feminist criticisms single out PETA, and rightly so, as they are the largest organization in our movement.  However, I argue that the problem runs much deeper than that.  In recent years, I have seen the objectification of sexualized women’s bodies go from a shameless ploy to “consistently grab headlines,” as PETA explains, to an increasingly normal tactic for the movement at large.

Take for example the British conservation group Fish Love, which features nude celebrities (mostly women) fondling or straddling the corpses of free-living sea animals.  Or, VGirls|VGuys, a site that promotes veganism through the sexualized bodies of attractive men and women.  Female profiles far outnumbering that of men, and women are far more likely to be posed nude or in lingerie or swimsuits.

In 2008, LUSH, a semi-vegan soap and cosmetic company launched a worldwide stunt that encouraged employees (mostly women) to march outside the store wearing nothing but an apron and perhaps some high heels to hand out leaflets on reduced packaging.  Never mind that many of LUSH’s products are still in packaging and that handing out paper leaflets is completely counterintuitive to reducing waste.  LUSH has also launched a campaign to end Nonhuman Animal testing which required a male actor to reenact graphic scenes of torture on a young woman in a nude bodysuit for ten hours in their store window.

Australia’s Animal Liberation Victoria routinely features young, thin, attractive women naked for one campaign or the other—oftentimes intersecting with violence.   Bloodied women are wrapped in plastic like packaged “meat,” strapped to vivisection tables, or curled up in a pool of red paint to protest whaling.  In a world where misogyny and violence against women continues to thrive, the normalization of sexist campaigning that denotes violence and exploits women’s vulnerable social position should be cause for our concern.

Not all sexist tactics are so blatantly problematic, however.  Less conspicuously, restrictive gender roles for women often creep into even those action repertoires that graciously allow women to keep their clothes on.  For instance, our movement tends to reserve the exciting, prestigious, and influential leadership positions for men.  There are considerably more male organization presidents, theorists, authors, radio and podcast hosts, and vegan celebrities.  Women, on the other hand, are relegated to the drudgery of Nonhuman Animal activism—that work which must be accomplished for the success of the movement, but which goes relatively unappreciated.  This includes event organizing, letter writing, fundraising, and other administrative tasks.

Another oft exploited feminine gender role is the expectation that women be nurturing caretakers.  Ecofeminists have embraced this role and reframed it as a positive asset to our advocacy efforts.  Promoting these gender roles, however, reinforces unrealistic expectations that may manipulate some women and exclude others.  And given that our movement is stigmatized as an irrational and overly-emotional lost cause for Bambi and bunny rabbits, explicit reinforcements of feminized advocacy may not be useful.  It may also dismiss men’s capacity for nurturing and caring.

Finally, in activist circles that glorify direct action (tactics that are generally violent and/or illegal), sexism once again becomes a strategy.  Violent direct action is, by and large, supported and promoted by male activists.  Masculine bravado and toughness is valorized.  Like the stereotypes embraced by ecofeminists, the macho fearlessness associated with the male gender role is exploited as a tactic.  Those who do not conform to this identity face humiliation and discrimination.  Not surprisingly, these androcentric tactics are far more likely to imperil one’s personal safety and might entail lengthy jail sentences.  Ascribing to masculinity in our movement can be dangerous business.  Likewise, in actively denouncing pacifism, these activists reject the feminized approach to Nonhuman Animal liberation.  Sexist interpretations of activist behavior shape appropriate and inappropriate activism.  Feminine tactics, in other words, are presented as an example of what not to do.

Gender is a highly politicized social movement tool.  Cultural expectations and social norms dictate how that tool will be wielded.   Unfortunately, these gender norms inevitably reflect stereotypical beliefs and prejudices that often negatively impact both women and men.  The Nonhuman Animal rights movement regularly objectifies and symbolically abuses the bodies of women (and sometimes men) for media exposure and fundraising.  Expectations that men lead while women support them behind the scenes has created a movement led by a few men with women comprising the rank and file.  Expectations that women nurture and men aggressively take risks trivialize women and endanger men.  For all involved, sexist tactics are hugely restrictive and limit our potential.  We should prioritize building a safe and respectful atmosphere for our activists as a means of rejecting inequality, but also as a means to maximize our effectiveness.  We can’t reasonably expect to liberate Nonhuman Animals so long as we refuse to liberate one another.