Security Guard Shields Dog from Rain Outside Grocery Store and the World Seems a Little Brighter! 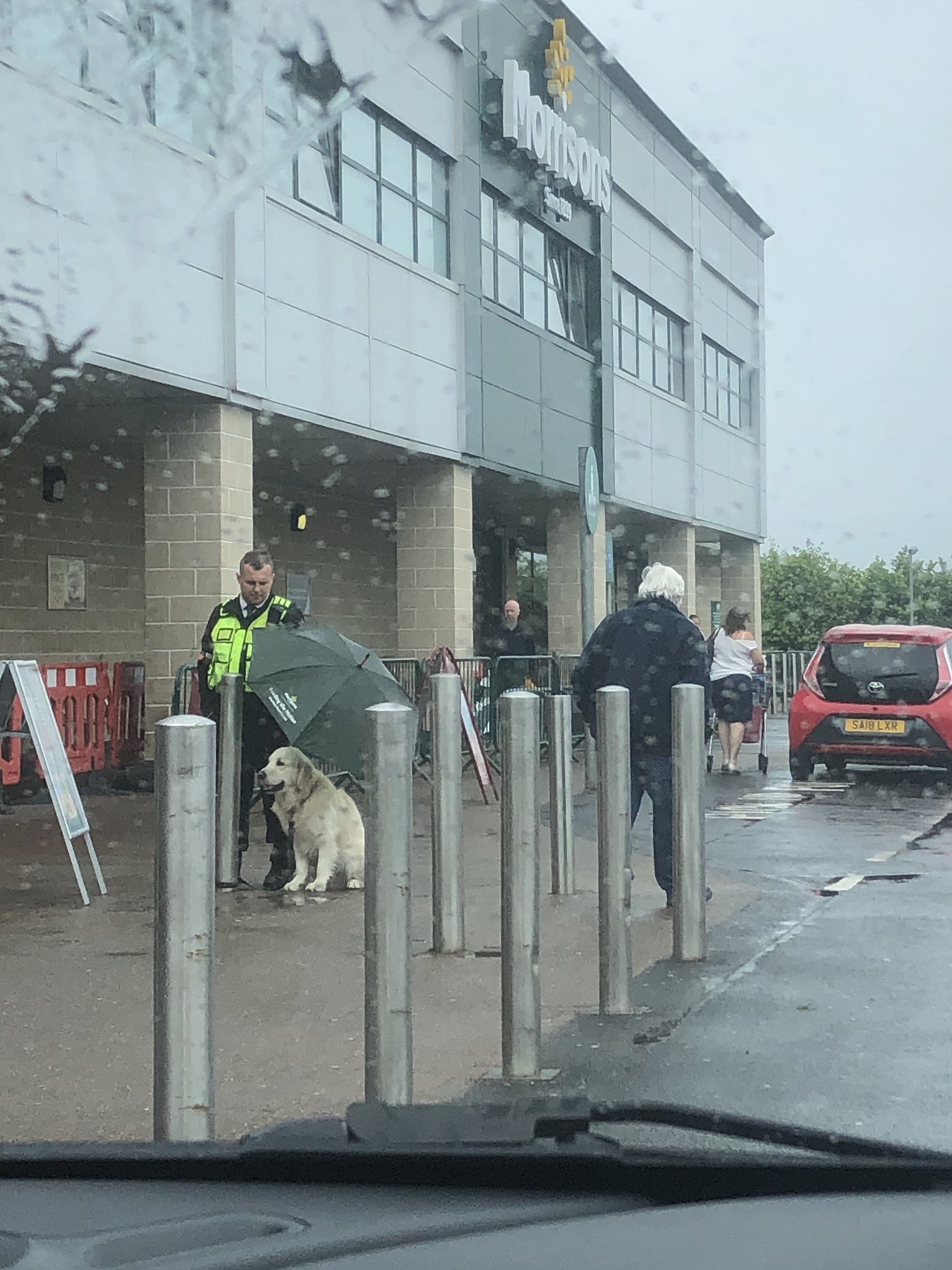 If you can’t come in from the rain, the next best thing is an umbrella. And, if you’re a dog, you don’t have thumbs so you most likely don’t have one. So, how about your very own umbrella handler?

The sweetest photo was taken when a security guard outside a Morrisons grocery store in Scotland used his umbrella to shield a dog sitting in the rain while waiting for his human.

Posted to Twitter on June 28 by Mel Gracie, the guard was quoted as saying, “well you never know how dogs feel about the rain.”

Shout out to this @Morrisons security man keeping this good boy dry. He said ‘well you never know how dogs feel about the rain’ pic.twitter.com/B9CPWI7u5Q

The heartwarming photo went viral and garnered more than 152,500 likes (and counting) and hundreds of comments praising the store’s guard who is obviously all heart.

According to the Twitter post, Mel Gracie found out the guard is Ethan Dearman. She wrote, “thanks for making a lot of people happy today!”

Dearman replied praising Morrisons and its team for being able to shelter the dog who the world would soon know as Freddie:

I just wanna give the Morrisons giffnock team a shout out. If it wasn't for the teamwork between staff on a daily basis then I wouldn't have been able to shelter Freddie from the rain and watch customer queues while staff members at the door continued to count the numbers inside.

And another chimed in, “its very rare you get nice posts like this on twitter at the moment.”

The dog’s human David Cherry praised Dearman and the “Good community vibes. People looking out for each other. He’s always nice to my Dad and brother, it’s nice to hear nice things.”

Our dog Freddie has went viral after kind security man put up his umbrella for Freddie when it started raining at the Morrisons near my parents house. Good community vibes. People looking out for each other. He’s always nice to my Dad and brother, it’s nice to hear nice things 😊 https://t.co/VhBAjVSYln

Cherry even went so far as to post a cute photo of Freddie as a puppy. That made everyone’s day.

Thanks to security man @dearmanethan for putting the umbrella over Freddie when it started to rain! So kind! He’s always so nice to my brother Stuart, my Dad and our Freddie!Here’s Freddie when he was a puppy! pic.twitter.com/TJuX41ozFE

It’s really no surprise that Dearman would help out Freddie in the rain. One quick look at his own Twitter page and you can see he’s a true dog lover, posting about his own dog Sanchez who is doing much better after hurting his leg.

Just got home from the shift at morrisons to be told by my family that Sanchez has been running around again. So he's pretty much back to his happy self. pic.twitter.com/52sonhferu

Thankfully, he was there to help Freddie in the rain. The rest is now history.