Ever heard of bears doing the twist in the jungle? Well, bear species including our indigenous sloth bears have a rather peculiar habit of grinding and twisting their feet into the ground to leave distinct scent trails! This unique behavior of bears using chemical communication through scent marking is called pede-marking.

What is Scent communication? 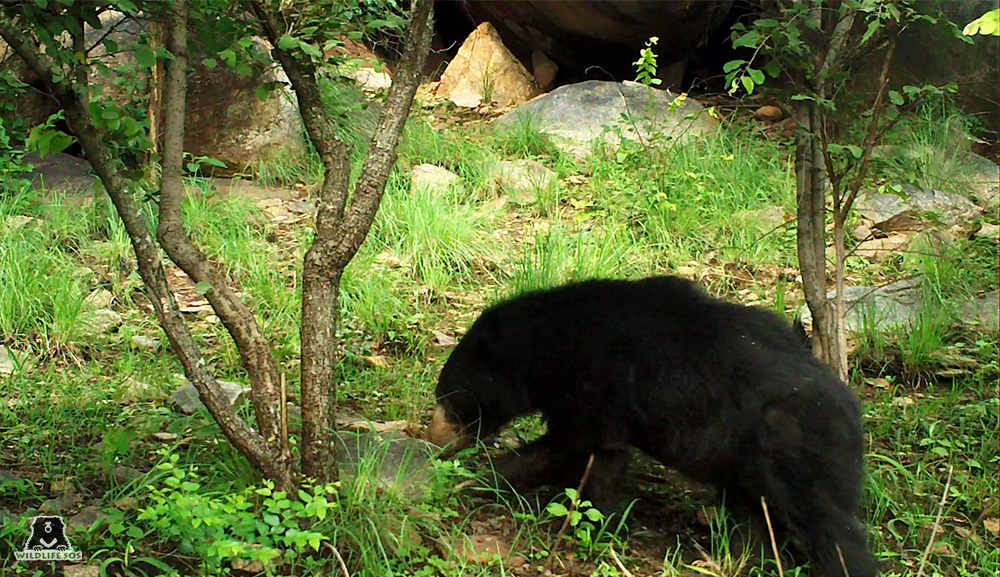 A sloth bear sniffing near a den. Image Courtesy of Wildlife SOS

Chemical communication through scent marking plays a significant role in the behavioral lives of wide-ranging mammals, including bears. As most bear species have large home ranges and are non-territorial, scent deposits while walking is an effective way to communicate with each other. This helps animals understand traits about each other such as identity, sex, territorial borders, social status, and even reproductive state.

So bears have smelly feet? 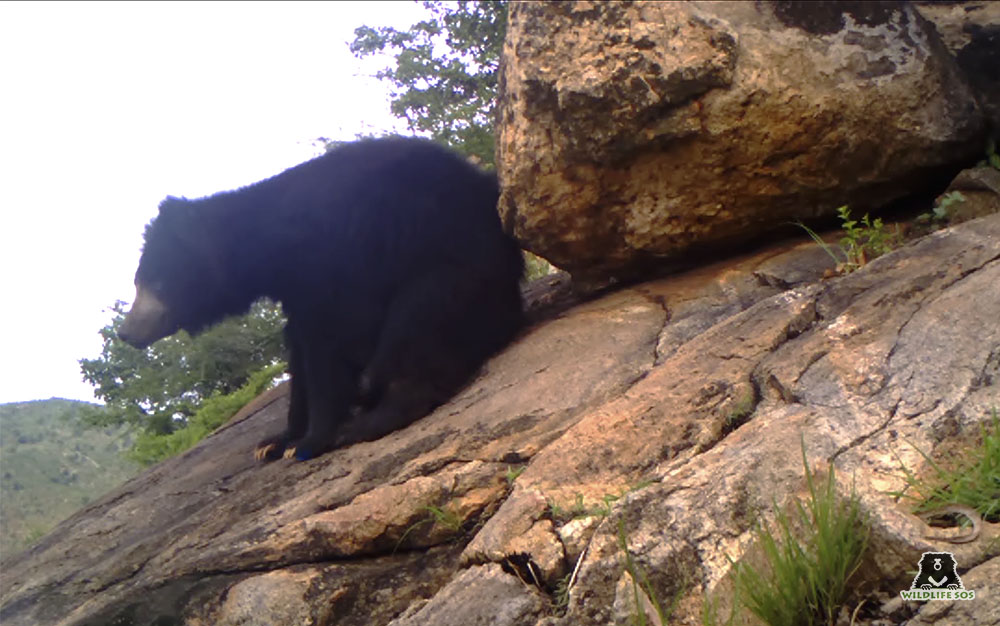 A male wild bear rubbing his back against a rock to leave a scent trail. Image Courtesy of Wildlife SOS

Bears have pedal glands in their feet that secrete specific scents. Studies show that mainly adult males display this behavior, especially before and during the mating season.

While Pede-marking has previously been studied in other bear species not much research was done on Sloth bear behavior until Wildlife SOS began their study on the ecology and denning patterns of wild sloth bears in the state of Karnataka, India.

In 2013, our veterinary team first observed this unique behavior in Gokul, one of the resident sloth bears residing at the Bannerghatta Bear Rescue Centre. It looked like the bear was doing the ‘moon walk’ so his caregivers started calling him “Michael Jackson!” We initially concluded that dragging his feet on the ground was a form of stereotypy which is commonly exhibited in animals that were kept in harsh captive conditions such as being used for the dancing bear tradition. However, it was much later that we discovered a wild sloth bear displaying the same behavior in a camera trap footage from our bear denning project site in Karnataka. This revelation led to a more in-depth study of pede-marking in sloth bears.

Over a period of almost 2 years (2014-2016), the Wildlife SOS research team captured 8 wild sloth bear pede-marking events on camera trap, which may represent the first documented cases of this behavior in this species. Our studies showed the use of chemical communication techniques by adult male bears in order to mark the den sites and we wondered if the behavior was intended to keep intruders away from valued den sites. Apart from pede-marking they also used techniques like defecation, leaving urine trails and scratching or rubbing themselves on trees. Pede-marking events typically only last a few seconds, however, the frequency and purpose of this behavior remain uncertain.

The largely nocturnal behavior of this species may be a reason why this has eluded observation in the past. 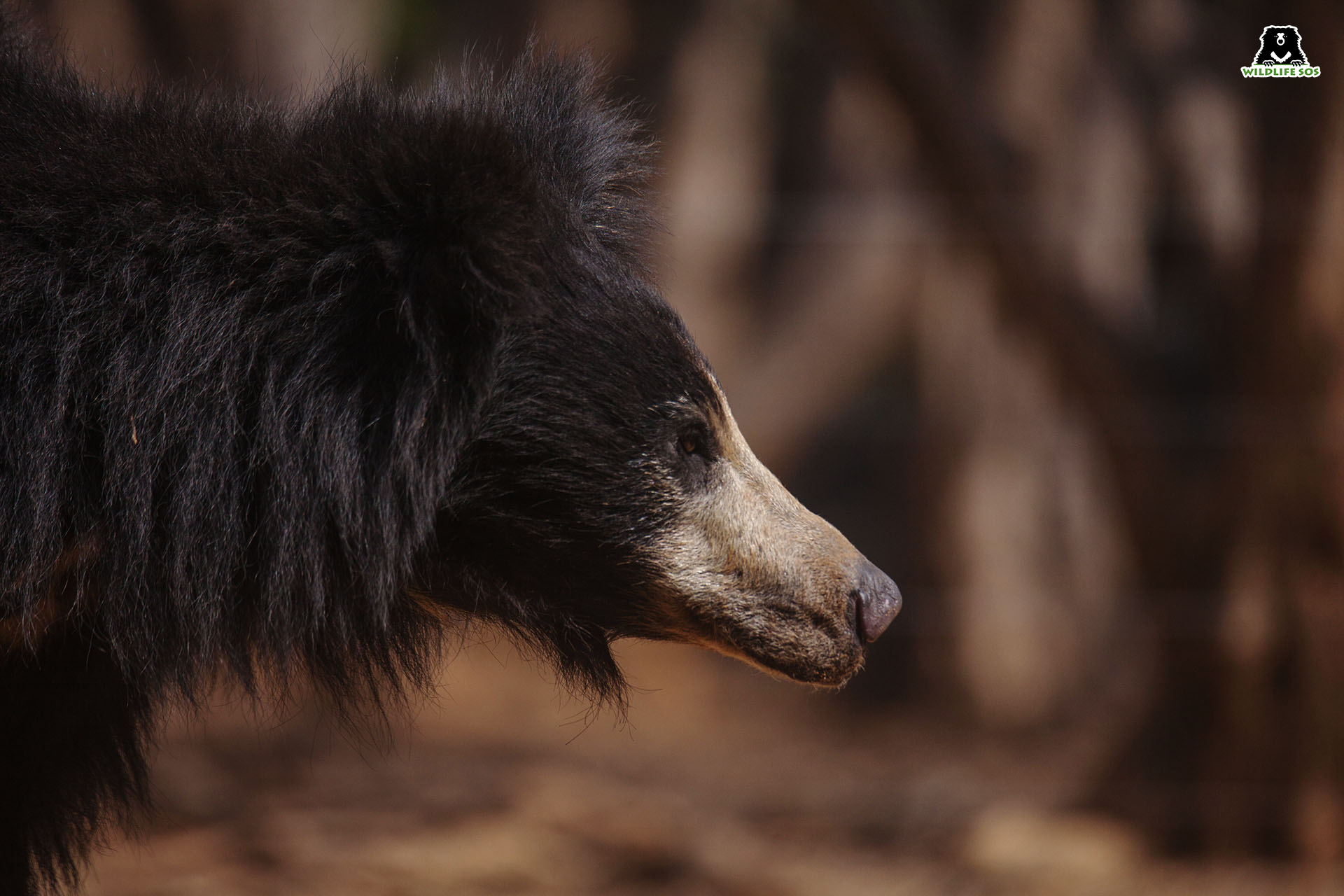 Of all the eight bear species in the world, the sloth bears is the least researched. Through the use of camera traps Wildlife SOS have been successful in gathering valuable information about these elusive bears and has conducted sound scientific research aimed at conservation of sloth bears in India.