Saving Marine Species Without Apology: Why We Don’t Mind Being Called ‘Pirates’ 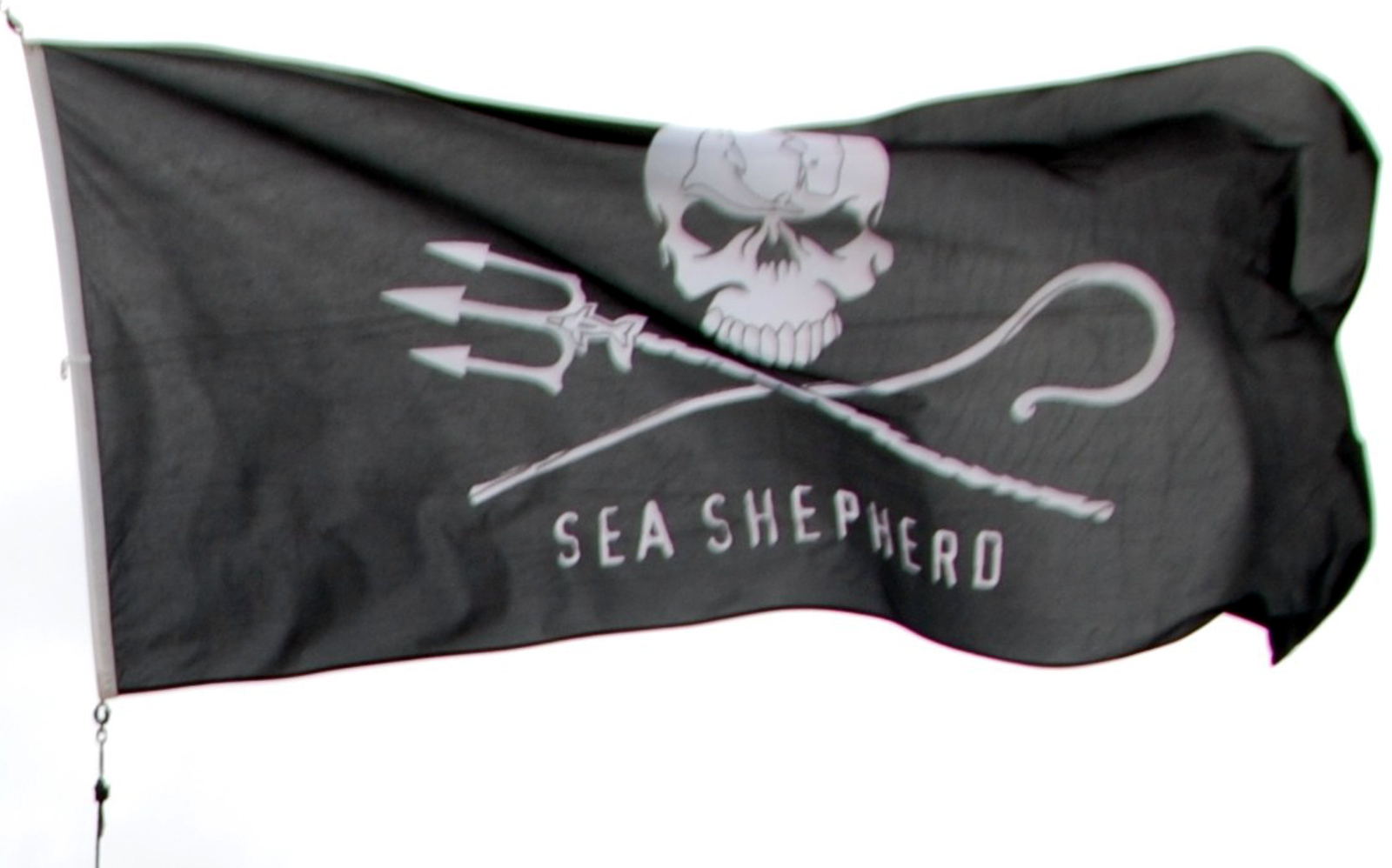 When the services of good pirates are required, who you gonna call?

At last, an article that recognizes Sea Shepherd’s role in a world where the majority of the earth’s surface lies in a state of anarchy and lawlessness. Since 1977, Sea Shepherd has been protecting marine life from ruthless and illegal exploitation.

Of course, there are obstacles and problems to overcome. Even the great Lord Horatio Nelson was blocked by judges, merchants, and government bureaucrats when he tried to interfere with profiteering pirates in the Caribbean.

Today that is especially true of politicians. Jean Michelle Cousteau once told a friend of mine, “I like Sea Shepherd, but how can I be expected to talk with Presidents and Prime Ministers if they think I support Sea Shepherd?”

Many years ago when our enemies began calling us pirates I responded by creating our own version of the Jolly Roger.

We were not ashamed of being called pirates. Pirates get things done and tend to skirt the paperwork and the red tape.

In the 17th and 18th centuries, pirates attacked and boarded slavers and freed Africans from their shackles. Freed slaves were allowed to join pirate crews and could rise in the ranks based on their abilities. There was no other enterprise in the world at the time that allowed that sort of equality. Pirate ships were run as democracies, and their captains were elected in an era when captains of merchant and military ships were ruthless dictators.

Were they thieves? Is it theft to take gold from thieves? Sometimes we forget that the Spanish galleons attacked by the pirates were not very innocent; the gold they carried in their holds had been stolen from the Meso-American Indians whom they had murdered.

Today, who are the real pirates of Somalia? The impoverished fishermen driven to rob ships out of desperation because the pirate fishing fleets of Europe and Asia have looted Somalian waters of all their fish?

Many pirates of old were rewarded for their efforts. Aside from Drake and Raleigh, Henry Morgan was knighted and given the governorship of Jamaica. The French pirate Jean LaFitte became an American hero, as did John Paul Jones, the founder of the American Navy who had been condemned by the British as a pirate. The French pirate Robert Surcouf was awarded the Legion of Honour by Napoleon.

Which all goes to prove that pirates are good or bad depending on your point of view and your vested interests.

Sea Shepherd crews cannot legally be defined as pirates. The plain simple fact is that if they were, Sea Shepherd vessels would not be given the right to berth in world ports or to fly the flags of the nations where the ships are registered. Sea Shepherd’s “Jolly Roger” is a flag of a movement, not a flag of registration or a symbol of lack of registration.

The Thunder was legally a pirate vessel because she had been stripped of her flag by Nigeria. A pirate ship by definition today is a ship without a flag. Sea Shepherd ships have always flown legitimate flags and have always abided by the regulations of their flag states. Presently, Sea Shepherd ships are officially registered under the flags of the Netherlands, Australia, the USA, and Great Britain. Sea Shepherd vessels also fly their own Jolly Roger and the flags of the Five Nations (Iroquois), the Aboriginal and Maori flags given in recognition of Sea Shepherd’s work to protect wildlife and the environment.

That work makes a difference. Sea Shepherd stops poachers where there is a lack of enforcement against poachers, rescues marine wildlife from illegal exploitation, and investigates and documents illegal activities. Sea Shepherd partners with the police and with government rangers where and when possible. And Sea Shepherd educates and empowers volunteers with the understanding that each and every individual has the ability to make a difference.

Sea Shepherd expects to be unpopular and to be criticized for the simple reason that Sea Shepherd says things people do not wish to hear, does things that some people would rather not be done, and tends to embarrass some governments, and cost many powerful interests a great deal in profit losses.

Sea Shepherd’s confrontations are not restricted to the high seas, but to wherever Sea Shepherd must fight for its clients (biodiversity and endangered species in the ocean), including in the courts and in the forums of world opinion in the media.

Our efforts to save bluefin tuna off the coast of Libya in 2010 landed Sea Shepherd UK, Sea Shepherd Conservation Society (SSCS) and myself in court in Britain when the poachers charged us for the loss of profits for the 800+ tuna we liberated from their nets. We won in the courts and the tuna poachers had to pay our court costs.

SSCS is presently fighting the Japanese whalers in the courts with precedent-setting arguments that could have profound legal implications.

But most importantly pirate crews of passionate Sea Shepherd volunteers are presently on the beaches of Costa Rica, Honduras, Guatemala and Cape Verde saving the lives of sea turtles. Captain Oona Layolle from France is wrapping up Operation Milagro, defending the endangered vaquita in the Sea of Cortez. Captains Peter Hammarstedt of Sweden, Sid Chakravarty of India and Adam Meyerson of the USA are working on opposing illegal fishing off Africa, in the South Pacific and in the North Atlantic. Captain Alex Cornelissen is organizing a plan to save the lives of pilot whales in the North Atlantic. Sea Shepherd volunteers are defending seals in Scotland and Finland and opposing poachers in the Galapagos Islands.

Sea Shepherd pirates are the first pirates of compassion that the world has ever known – pirates without profiteering, driven into action by a sense of urgency that if we don’t act to defend life in the oceans, who will?

Most people I meet on the street, from students to lawyers, from artists to policemen, voice their support for Sea Shepherd’s efforts.