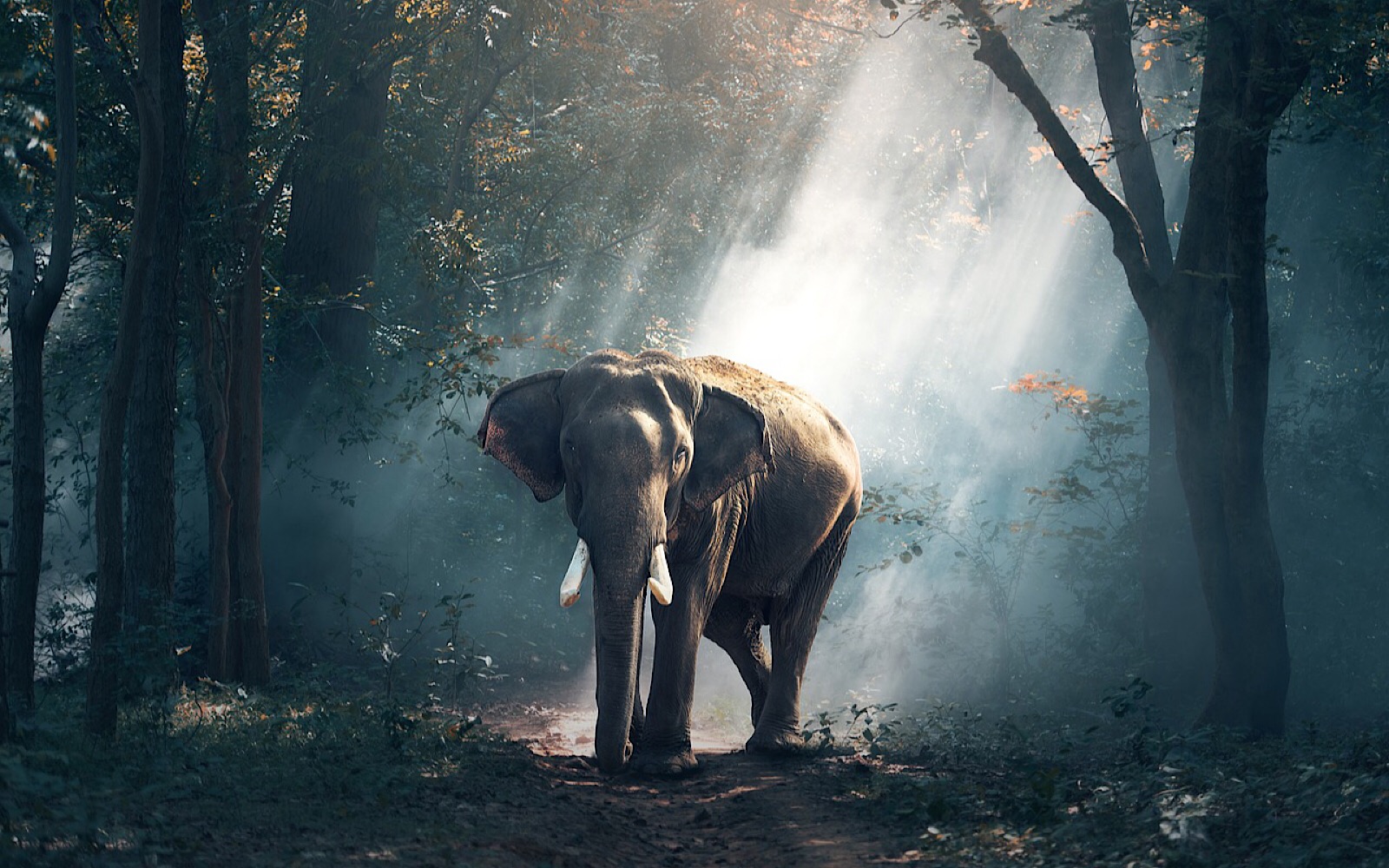 My earliest memory of what I feel about animal captivity was in my parochial school gymnasium in 1980 when the nuns pulled down a big white projection screen and the entire school viewed the film Born Free, about an orphaned lion cub and the humans who helped her. Tears streamed down my face as Joy and George finally released Elsa back into the wild to the life she was born to have.

Later, when my parents took us to the Barnum and Bailey Circus, I cringed and my stomach ached when I saw the tigers whipped into submission and the elephants dressed like clowns. One day my friends suggested we visit SeaWorld, and my thoughts were of whales and dolphins being torn from their natural environment only to swim in circles for a long meaningless life in captivity. There was absolutely no awe or entertainment in it for me, and I wouldn’t be a part of it. The only thing I felt was horrified.

Today, when you ask my children, “Have you ever been to a circus?” Their response is, “No, because the elephants are abused.” I have heard many times from friends and family, “The circus is harmless.” Harmless is hardly a word that would describe being torn from your family and forced to live in chains in an unnatural environment for decades.

I have always felt that if people stopped for one moment to look at the body language of these nonhuman animals, they would easily see what I see: the elephant is swaying back and forth because she is distressed; the captive orca’s dorsal fin is collapsed because of what you have done to him; the animals are cowering and performing tricks because they have been beaten into submission.

When my youngest child was about three-years-old, a cat scratched her at an adoption event. The other parents were up in arms. My response to my daughter was, “He just told you to leave him alone. It’s the only way he has to communicate that to you.”

I never felt like I quite fit in until I became involved in animal rights as an adult and began communicating with like-minded individuals who acknowledged the capacity of other species to suffer just as we do and were doing what they could to alleviate it. My turning point as an advocate was in August 2016 when I began speaking to attendees of the Meadowlands State Fair in East Rutherford, New Jersey about the elephant being forced to give rides over and over in circles in a blacktop parking lot, no soft grass anywhere to be found, all while she was threatened with a bullhook and the teenagers riding her disrespectfully jabbed their feet into her sides as they laughed.

At the time, I didn’t know the name of the elephant or know how I could get involved to make a change. I only knew that I needed to finally act on the pit in my gut to try to do something about it. So I began to write letters on behalf of the elephant attending the Fair each year. Little did I know that the one elephant was actually three different elephants, Beulah, Karen, and Minnie, one of whom traveled each summer from the Commerford Zoo in Connecticut to East Rutherford. 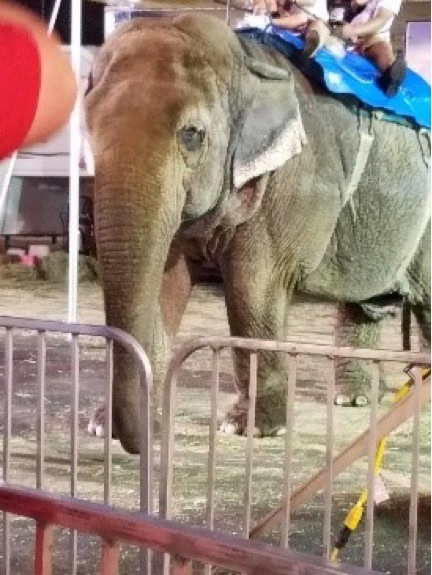 A Commerford elephant giving rides at the Meadowlands State Fair, August 2017, taken by my sister Kristen Morgan who attends the fair each year. Kristen questioned the handler in 2016 and was told the elephant was retiring. However, the same elephant showed up again in 2017. Gun shots were also fired at the Fair in June 2017.

To help end the suffering of these elephants, I made pleas on social media for potential fairgoers to boycott the fair and encourage the organizers to no longer allow Commerford to bring the elephants; if this happened, the Fair could easily go on without any interruption. I wrote about the advertising of the elephant performances as “educational.” Had the people who made the decisions ever taken a moment to view the “elephant crushing” training videos, which show how humans control these cognitively and emotionally complex beings? I included YouTube links in my letters. I also used my Facebook and Instagram accounts to educate people about elephants and their actual needs versus what we are able to give them in captivity.

In all of my letter writing on behalf of the Commerford Zoo elephants, former First Lieutenant Governor of New Jersey Kim Guadagno was the only government official who responded. Guadagno alerted me to Nosey’s Law and suggested I reach out to then New Jersey State Senator Raymond Lesniak, who had co-sponsored the bill. Lesniak was not only easy to reach via social media but easy to talk to as well. It was a blessing to find out his heart had always been in the fight to help protect elephants and other animals from harm. Lesniak’s legislation was approved by the Senate Committee in September 2016. On January 8, 2018, Nosey’s Law passed the Assembly 62-2-2. Chris Christie pocket vetoed the bill by not signing it before the end of his term, but there is hope this bill will come into being with the new Governor.

All of the people who have fought tirelessly for Nosey over the decades prayerfully await the news from Lawrence County District Judge Terry as to whether she will continue living a peaceful life in The Elephant Sanctuary in Tennessee; free of bullhooks, abuse, neglect, performing, and chains. I am proud to belong to groups like Nosey the Elephant Needs Our Help and Action for Nosey Now who are truly the voice for the voiceless. When my children would come home from school each day, they would ask, “Is Nosey free?” Thanks to advocates, a judge has ordered Nosey can stay at the sanctuary. 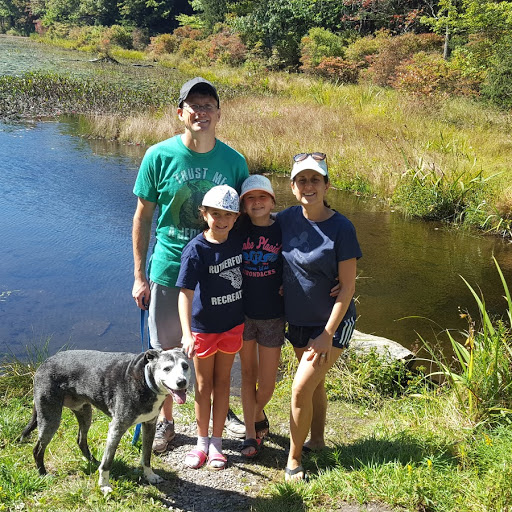 My family and my two future animal rights activists.

I am also hopeful for Minnie, Beulah, and Karen and the good people of the Nonhuman Rights Project in their quest to free these elephants to PAWS sanctuary, which I wholeheartedly support. The NhRP has made it their mission to provide a voice to those who cannot defend themselves and are so desperately in need of it. When I heard about the NhRP’s elephant rights lawsuit, I felt a sense of relief. There are people who know that what is going on isn’t right and they are doing something about it.

When I hope and pray for the Nonhuman Rights Project and freedom for Beulah, Karen, and Minnie, I can’t help but remember the famous words of Margaret Mead: “Never doubt that a small group of thoughtful committed people can change the world. Indeed it is the only thing that ever has.”

Collectively, we as animal advocates don’t turn away because it is hard to watch. We watch even when it hurts and try to figure out how to not only help these individual animals but also change the world so that it is more just for all. That’s what the NhRP’s lawsuit is all about.