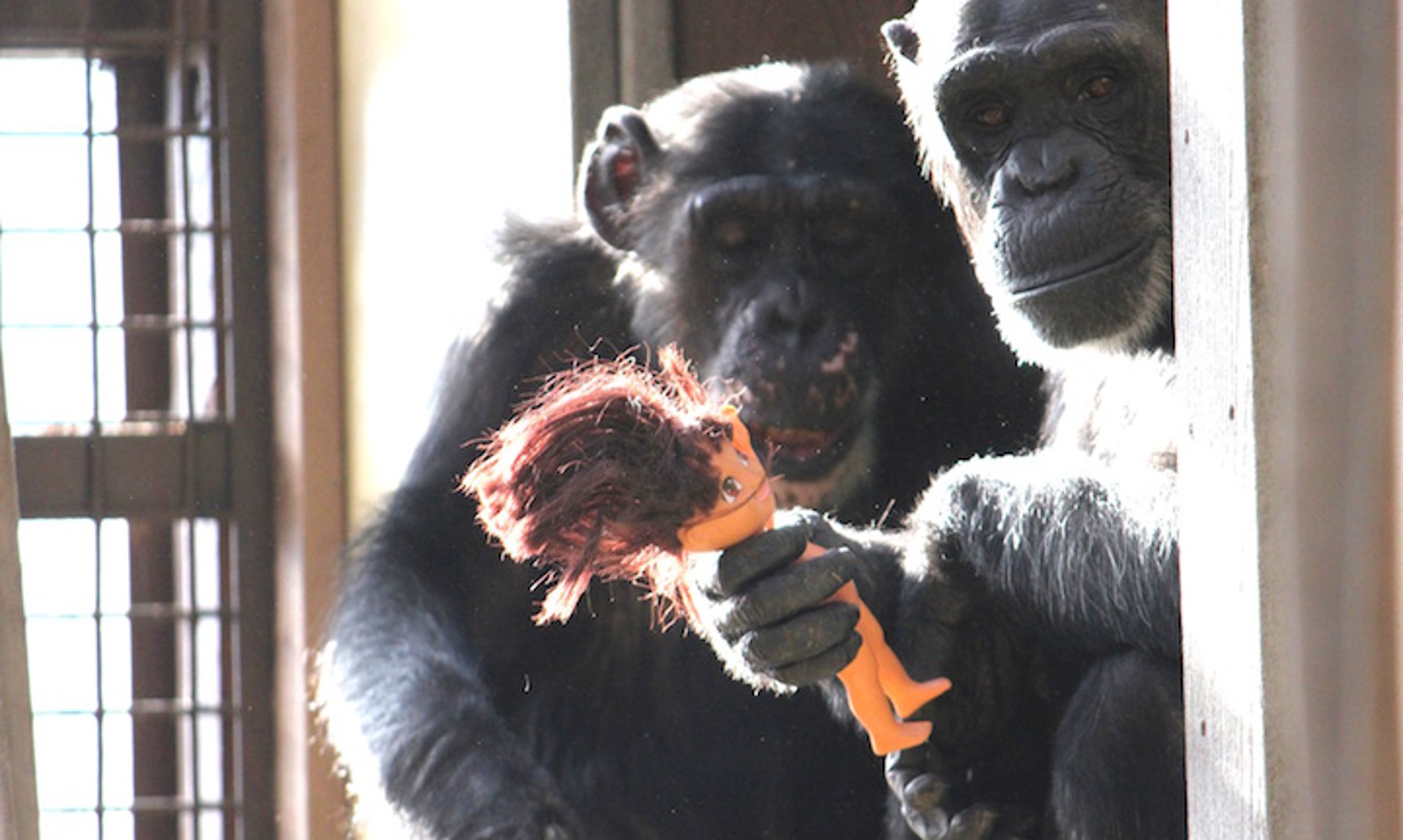 Chimpanzees share around 90 percent of the same DNA as humans. Anyone who has met or interacted with a chimp can speak to their incredible intelligence, emotional abilities, and knows how distinct and unique their personalities can be. Yet, despite all the similarities we may share with chimpanzees, these animals are continually captured from the wild and forced into horrific lives in research facilities and testing labs. Thankfully, many people are stepping in to help lab chimps, advocating to get them released from research facilities, and providing a safe and loving home for individuals once they are finally retired.

Jamie and Foxie  are two chimpanzees, currently residing at Chimpanzee Sanctuary Northwest, who’s lives were forever changed because of their kind rescuers.  Both of these sweet ladies are about to hit the 40-year-old mark and are proving that 40 really is the new 30! These two have adjusted to their new life at the sanctuary and love nothing more than hanging out and acting goofy. While their antics are certainly adorable, their presence at Chimpanzee Sanctuary Northwest (CSNW) sends a message to all of us about the rich interactions and relationships that all chimpanzees are capable of. Sadly, these two along with five others weren’t always in an environment where they were appreciated for the individuals that they are or given the kind of freedom and enrichment that they deserve. 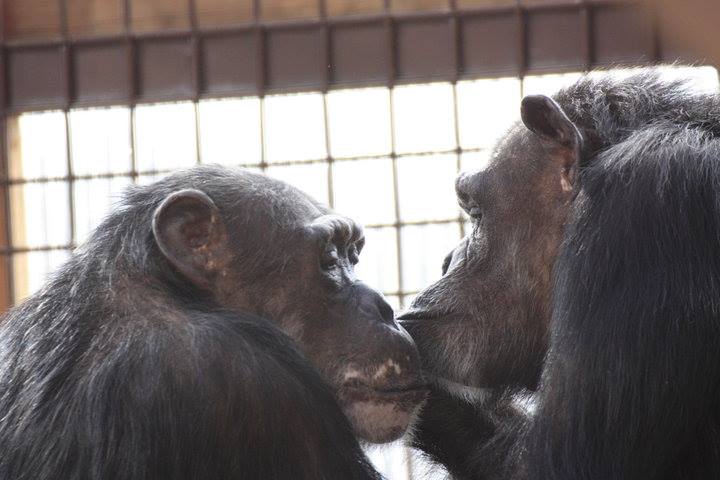 Jamie and Foxie came to CSNW on June 13, 2008, along with Annie, Burrito (best name ever!), Jody, Missy, and Negra after spending their lives being exploited by humans. They all came together from a biomedical research facility in Philadelphia where they were subjected to tests for hepatitis vaccines for years.  As we all know by now, animal testing in even the best conditions puts these innocent creatures in painful situations and subjects them to intrusive procedures while living lives void of care and nurturing. And before their time as unwilling medical prisoners, life had not been much easier. Several of the chimps had been used in the entertainment industry and some had been taken from Africa when they were just babies without ever knowing the warmth of their mothers or the freedom of the outdoors. 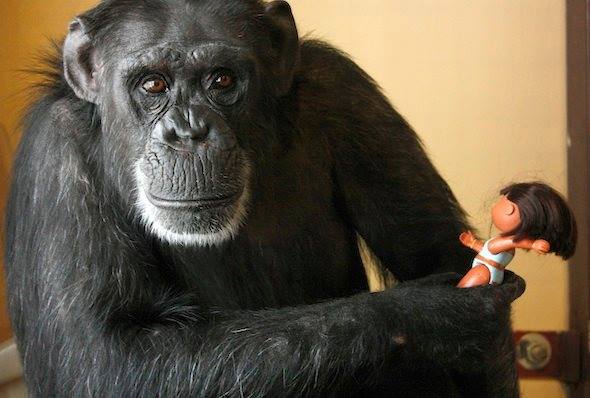 Foxie along with some of the other female chimps was used not only for testing but also for breeding.  She had four babies while she was held at the research facility, two of which were twins. We can only imagine the confusion and traumatic loss that she must have felt to experience her pregnancy and then not have her babies at the end of each one as they were taken away to become test subjects as well. Upon moving into CSNW she kept to herself for quite a while until adopting a troll doll which she carried and held as if it was her own. Today she has many dolls thanks to the donations from kind people who have heard the chimps’ stories. She also now loves to play with her chimpanzee and human family members. 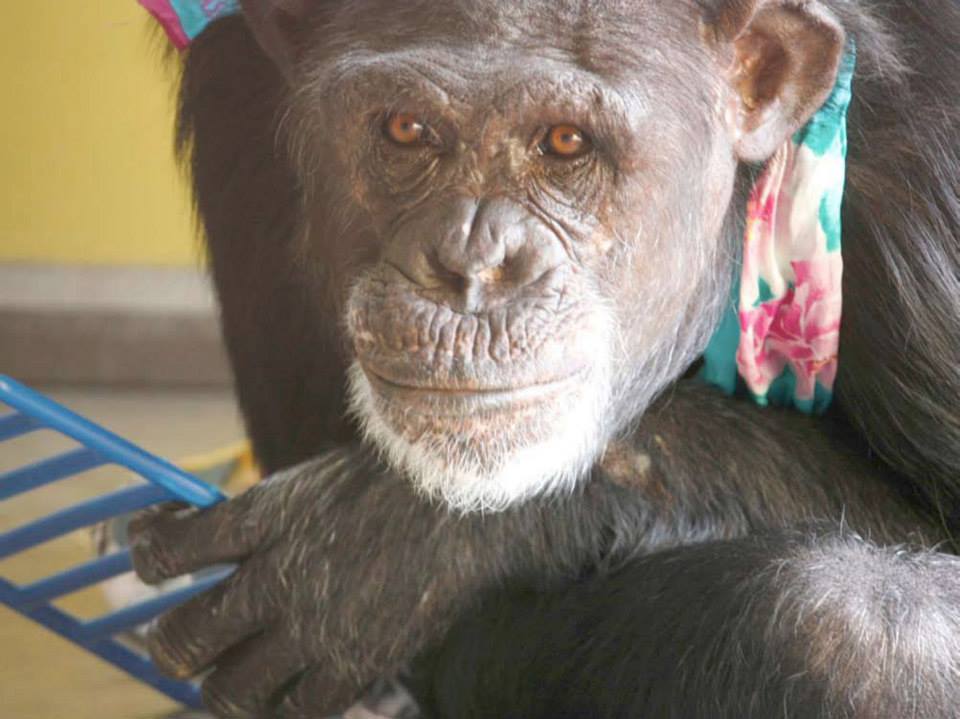 Jamie has the number #CH522 tattooed on her from her days in the facility. It is a reminder of the disconnect that humans have from animals when they use them for their own benefit. Yet she is not a nameless subject at her current home, nor is the rest of her family. Today she is Jamie who is obsessed with cowboy boots and is known for her strict surveillance and regulation of all chimp activities at the sanctuary. Her watchful eye was helpful in alerting caregivers to a brushfire that occurred on a hill not too far from their home. Between the unusual vocalizations coming from the chimps and the way Jamie was craning her neck to see out the window, the staff knew something was wrong. Despite having seen intentional fires on the property in the past, the chimps somehow knew this was not the same. Luckily firefighters were already on their way and made it to the area in time to put the fires out. We’re sure that for Jamie it was just another reason to remind her fellow family members that this is why she has to keep an eye on everyone!

A Better Life for Chimps

It’s hard to think about all of the horrific things that have been done to sentient animals in the name of science. Fortunately, the world is becoming more educated about the unnecessary use of animal testing and the demand for cruelty-free products is on the rise. Yet, we must be sure to continue to push for the rights of chimps like Jamie and Foxie along with all of the other animals that we can’t see or hear. If you would like to be a voice for chimpanzees you can learn more here. If you would like to donate toys you can check their wishlist or make a donation.