Another Reason to Leave Turkey Off the Menu This Thanksgiving: Genetically Modified Turkey 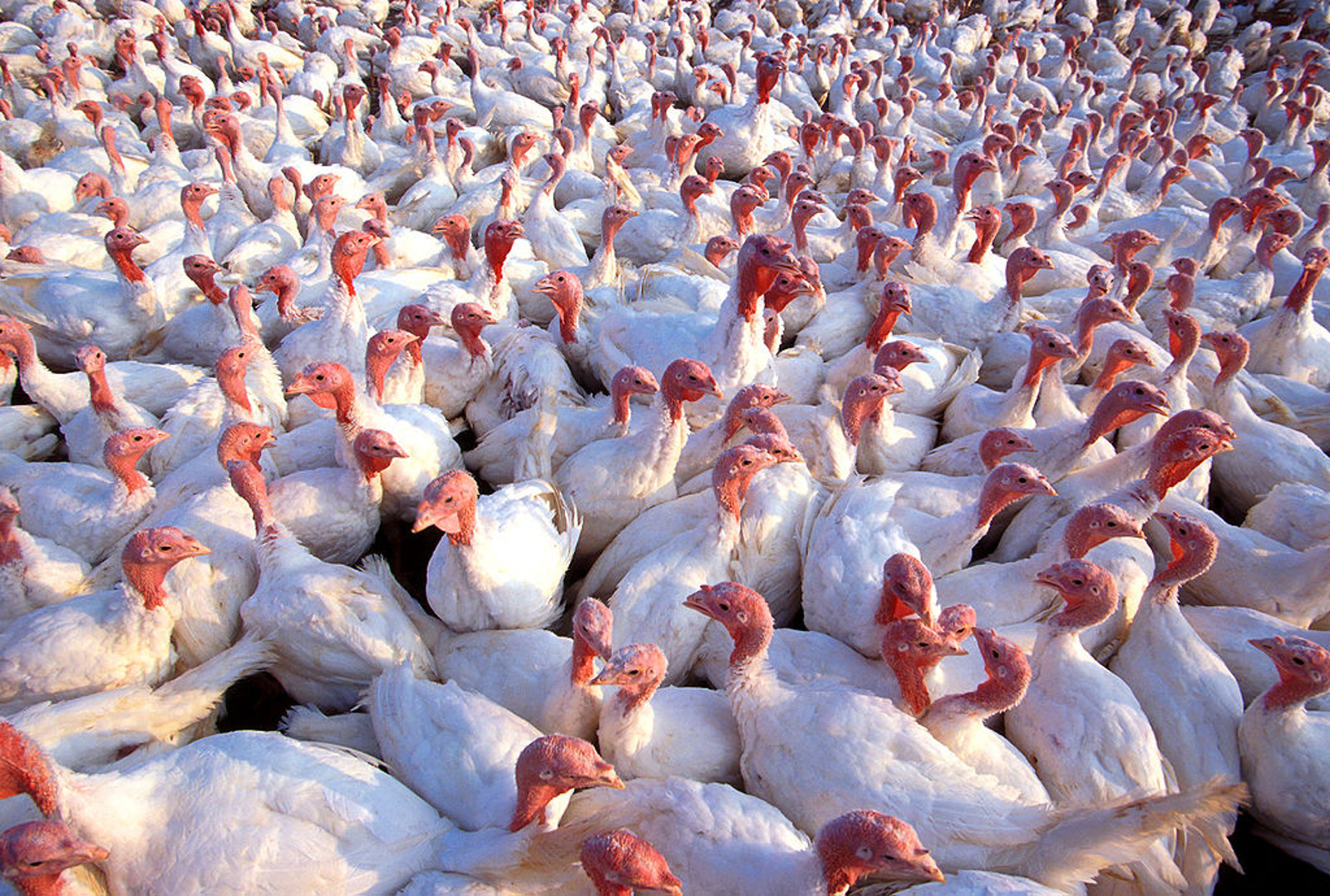 Consider the turkey. Increasingly, urban and suburban dwellers are getting a closer look at wild turkeys. Nearly hunted to extinction by 1930, wild turkeys are on the rise again, with their population estimated to reach seven million.They’ve been spotted in neighborhoods from California to Connecticut, and even milling around New York City.

Having spotted them in my neighborhood, in the Oakland, California hills, I’ve found that turkeys are majestic, inquisitive animals. And it seems that’s not a new observation: none other than Benjamin Franklin referred to them as “respectable” and suggested we make the turkey our national bird.

These wild turkeys are fascinating individuals who share similar characteristics with the millions of turkeys who’ll end up on Americans’ tables this Thanksgiving. Both have similar vocalizations, social structures and desire to protect their young.

But unlike their wild cousins, virtually all commercially-raised turkeys come from factory farms. These birds are raised packed wing-to-wing inside sheds, a far cry from their natural habitat. They’re not given any outdoor access and are confined in this barren, ammonia-filled environment for the duration of their lives.

Also concerning is how the turkey industry genetically manipulated these birds to be a far cry from their wild relatives. The commercial turkeys today look vastly different from the birds our pilgrim and Native American forefathers — and even our grandparents — ate.

While turkeys raised for food have not yet had their DNA modified through genetic engineering, the selective breeding they have suffered, along with drug-laced feed, has created no less of a Frankenfood when it comes to animal welfare. Today’s factory-farmed turkeys grow far faster and larger than turkeys of the past. They’ve more than doubled in size from the time of the Depression to today, ballooning from an average 13 pounds to an obese 29. They grow so large that not only can they not fly, they can’t even breed on their own. That’s right – the vast majority of turkeys ending up on dinner tables this Thanksgiving are a result of manual artificial insemination.

In the wild, these typically sleek birds are able to run up to 25 miles per hour and fly up to 55 miles per hour. But due to selective breeding, commercially raised turkeys are often unable even to walk more than a couple of steps by the end of their brief lives. Turkeys suffer crippling foot and leg deformities and because they grow so large so fast, many suffer heart attacks because their hearts can’t pump enough blood to support the rest of their bodies. If they don’t succumb to disease or mortal injury, turkeys are typically sent to slaughter at around five months of age.

Given the morbid fate these turkeys face in factory farms, it’s not surprising that millions of Americans now choose to celebrate Thanksgiving without eating turkeys. By focusing instead on animal-free proteins available in supermarkets everywhere like Gardein, Field Roast and Tofurky, and (naturally meat-free) holiday side dishes, we can create a cornucopia of rich, colorful, and delicious meat-free centerpieces. It’s also encouraging that some traditional farmers are striving to move the turkey industry away from the worst animal welfare problems by raising birds in better conditions, but this is still not a complete solution. Such a trend stands as a rebuke to the factory farming model that represents 99 percent of turkey production today.

In fact, more and more consumers are following the Three R’s of conscious eating: reducing consumption of animals, refining dietary choices by switching to products that meet higher animal welfare standards, and replacing animals in the diet with plant-based options.

In doing so, we can each join countless other Americans in celebrating our compassion for animals while doing something good for our own health. Thanksgiving is a great day to start.