4 Grassroots Organizations That Are Transforming How We See Farmed Animals 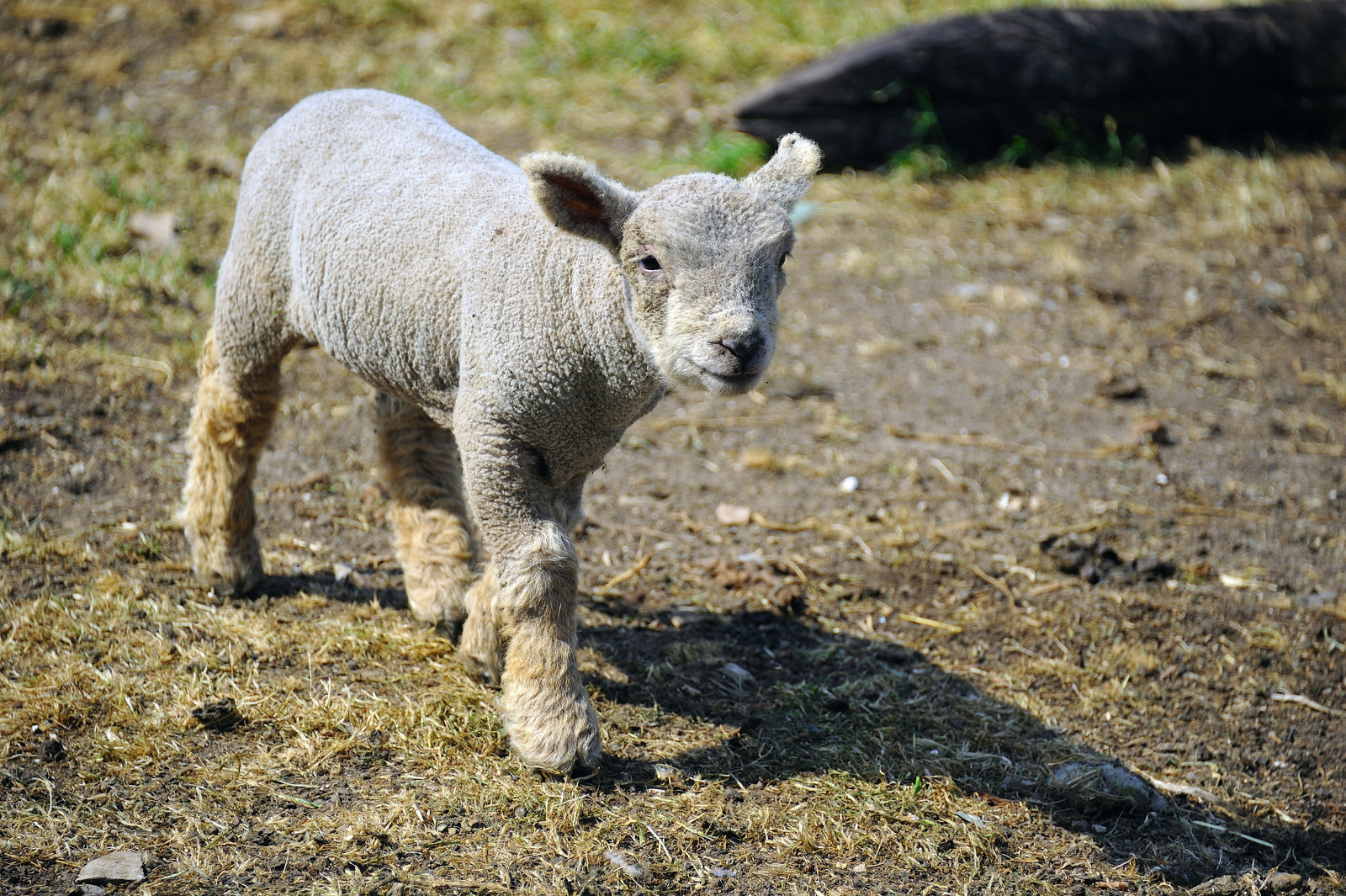 Many of us are familiar with large animal organizations and sanctuaries that have been campaigning for animal protection for decades. After years of development, they often have large operating budgets, significant parcels of land, and paid staff. But what happens when we scale down the concept of the large sanctuary and take matters into our own backyards?

This is just what a growing number of individuals are doing by rescuing farmed animals and caring for them in the same way that most of us care for our more typical companion animals – only they’re revolutionizing how we see historically commodified animals in the process.

Guided by compassion and inclusion, a growing movement of small grassroots groups are providing sanctuary for farmed animals while allowing each rescued individual to come forth as an ambassador for a shifting relationship with our fellow earthlings. Let’s take a look at four of these groups and what they’re doing to transform the way we see farmed animals.

Manning River Farm Animal Sanctuary was established in April 2014 by Denise, Fiona, Sharron and Tara, four compassionate vegan women whose goal is to provide forever homes to rescued farm animals. Situated in Kimbriki, Australia, the sanctuary is a safe haven for ex-battery cage hens, roosters, sheep, goats, cows, piglets and ducks. An explicit ethic that supports the rights of every individual at the sanctuary is at the core of every decision made at the sanctuary.

Some of the first residents at Manning River were stumbled upon by co-founder Tara Maher when she spotted an ad in the newspaper for male calves from the dairy industry. After contacting the farmer, a rescue was arranged and now four little male calves – Bo, Harry, Maverick and Ingram – will happily live their lives in peace.

With the help of much-needed donations, the sanctuary founders look forward to rescuing more farmed animals, including more birds and ex-dairy cows. Recently, one of the founders, Fiona Fox was diagnosed with brain cancer. However, through it all, Fiona has remained devoted to the animals and the sanctuary’s friends have launched a fundraising campaign to help cover Fiona’s medical costs and keep the sanctuary open. To donate to this amazing cause, click here. 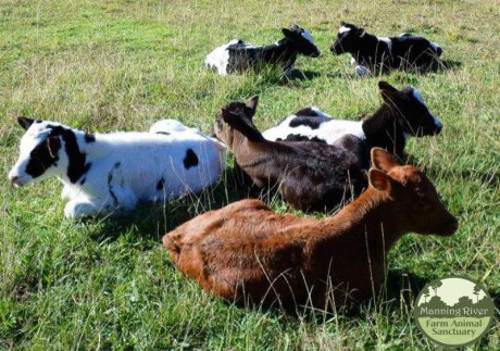 2. Triangle Chance for All, North Carolina

Founded in early 2014 by Justin and Rosemary Van Kleeck and a board of vegan directors, Triangle Chance for All (TCA) is guided by the mission to liberate farmed animals from the agricultural system. This is done through providing them with permanent homes at their small microsanctuary in central North Carolina, placing them at other sanctuaries, and by facilitating their transport to loving homes. Those rescued come primarily from county shelters in the Triangle region of North Carolina where farmed animals will either be returned to an exploitative farming situation or killed at the shelter.

They use the term “microsanctuary” to refer to a scaled-down version of large sanctuaries. With a small amount of land and small budget, they’re demonstrating what can be done with little space and resources. And their work doesn’t stop at animal care. They also do vegan advocacy as part of the effort to revolutionize how humans see farmed animals and to end animal exploitation. They founded the group Vegans with Chickens to encourage vegans to consider adopting chickens and roosters as pets.

TCA is currently home to roosters, hens, one duck and two potbelly pigs. Because the organization is 100 percent volunteer run, all financial support goes directly to rescuing and caring for animals. 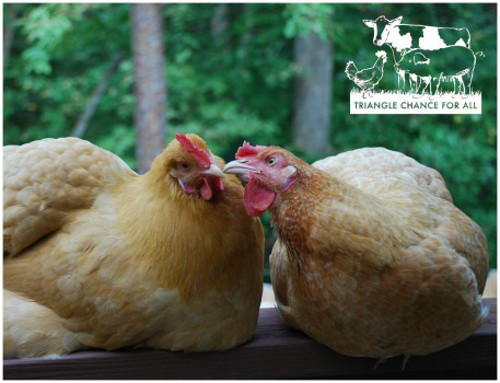 Founded by husband and wife team and former Silicon Valley professionals, PreetiRang Sanctuary began in May 2013, on 40-acres of pasture and wetlands about 65 miles northeast of San Francisco. The sanctuary is also home to wildlife who are supported by a four-acre lake that forms with the rainfall in winter and spring.

Based on the premise that “every life deserves to have a chance to express itself,” the sanctuary was created to honor the unique personalities of individual residents by providing them with peace and security.

The sanctuary is home to cows and hens and offers a sponsorship program for individuals to financially support the care of individual residents. Guests can visit the sanctuary and are encouraged to share in bringing an ethic of kindness to the animals in direct interactions. Check out their Facebook page for more information and their Go Vegan page for links to resources on animal exploitation, animal rights and vegan alternatives to animal products. 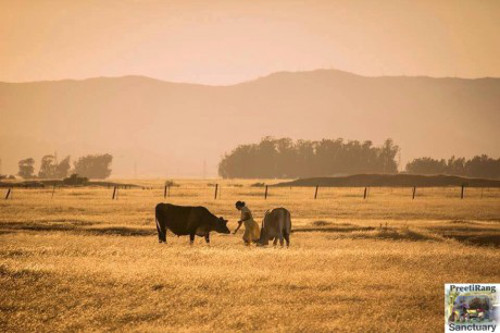 Piebird began in 2005 when Sherry Milford and Yan Roberts bought a house in rural Nipissing, Ontario and sought to create a loving home for animal friends and loving humans. A vegan farmstay that advertises its earth-conscious accommodation, homegrown plant-based food, musical gatherings, and workshops in gardening and compassionate living, Piebird is gradually expanding into a sanctuary for an increasing number of rescued animals.

Dedicated to environmental sustainability and guided by the belief that human-animal relationships allow people to see animals as friends and not food, the folks at Piebird are dedicated to promoting a connection to animals and the earth through on-site programs and online advocacy. What the hosts offer to sanctuary residents provides us with a new way of envisioning our relationship with animals. They promise to offer them the “freedom to be your fully realized selves, to wander the pasture, to snuggle in our arms if you want to, [or] to doze in the sun…”

With signs around the property like “Nice People” and “Animals are Friends for Love not Food” and a “Kissing Booth” sign that hangs over the goat pasture, Piebird is a place to be silly and joyful, but also to awaken to the dire need to save the planet and change the world for farmed animals. 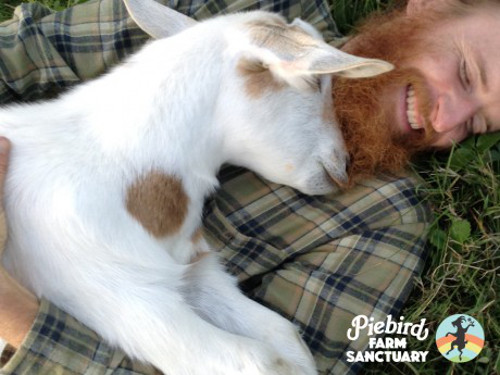 Because We Could All Use a Superhero

Sanctuary residents demonstrate to the public the sensitivity and intelligence of species that have been historically seen only in terms of their value for human use. Seen outside of the context of exploitation and through the eyes of compassion and care, every rescued individual is a representative of the wonders of their species, a glimpse into the individuality and personhood of everyone left behind.

While each group began at the grassroots with just a few dedicated animal-loving superheroes, with our support they are gradually expanding the scope of their rescue and education efforts and actively encourage each of us to follow suit. From eliminating our consumption of animal products to sharing stories and photos of rescued animals, we’re all changing the way that we relate to farmed animals.