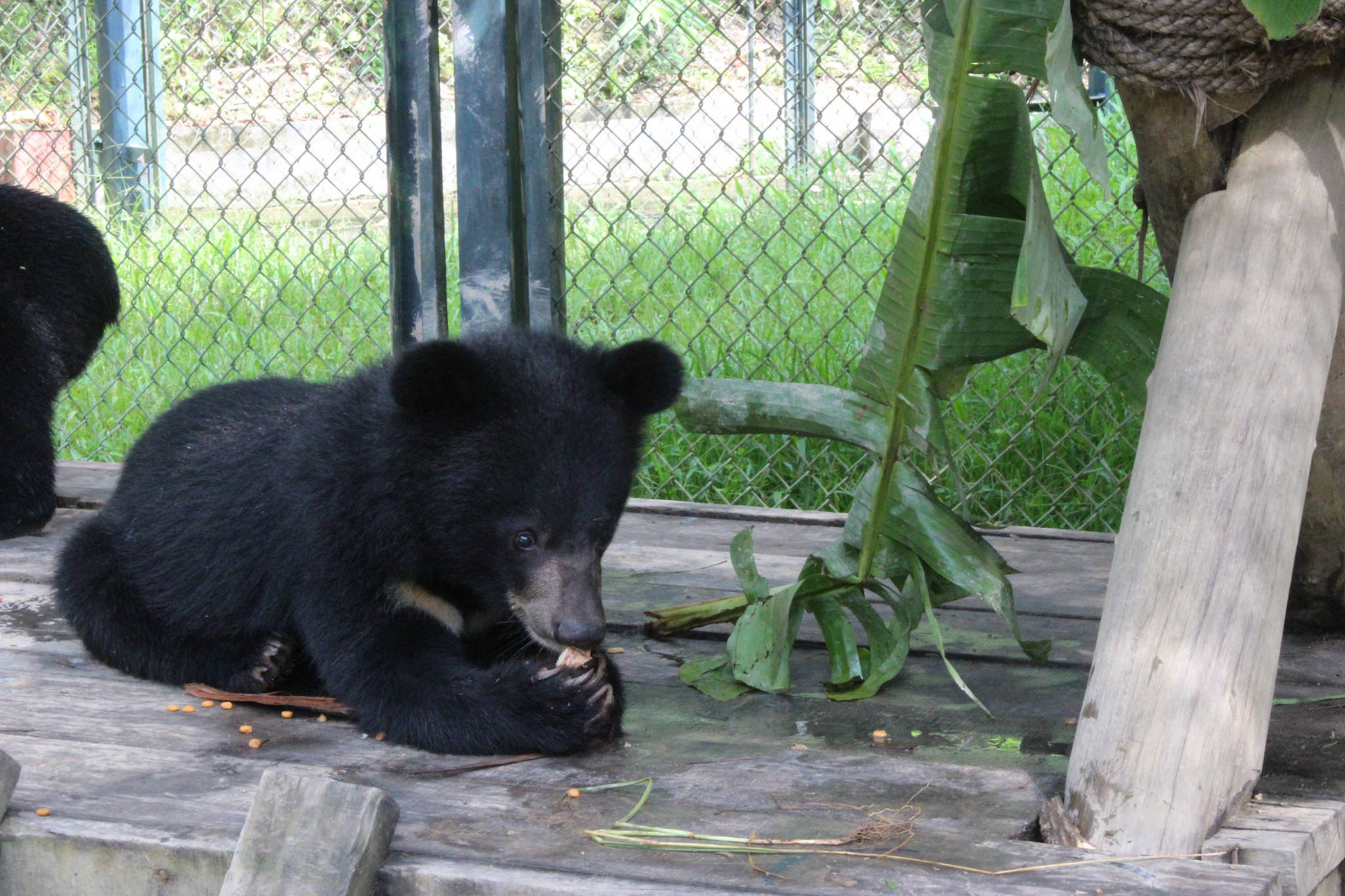 The prevalence of animal trafficking around Vietnam’s borders has caused staff at Animals Asia’s Vietnam Bear Rescue Centre to become hugely experienced in the care of moon and sun bear cubs.

Vietnam Bear and Vet Team Director Annemarie Weegenaar is an expert in caring for these young cubs. Over the years, she has picked up a few tips on how to replicate the care of a mother bear, here are a few of the best:

1. In the Wild the Cubs Would Suckle Their Mother – so We Do Our Best to Replace That

Precious little is known about Asiatic black bears in the wild. As a result, much information about the species – also known as moon bears – is taken from research of the closely related American black bear. Up to around six to nine months, a cub in the wild would suckle milk from its mother which we mimic through bottle feeding the cubs Esbilac, a puppy milk formula. From around 10 weeks, the cubs will begin to be introduced to solid foods such as banana, apple and pear and are slowly weaned off the milk formula. By the time they are around six months, the bears are usually enjoying an entirely solid food diet consisting of a variety of fruit, vegetables and puppy dog food.

2. Bears Their Own Age Are Great Playmates but Older Bears Are Too Much of a Risk


We try to match up cubs with other young bears of a similar age. When they are young, bear cubs tend to be incredibly playful and they benefit hugely from being housed with other bears. We have been successful in housing young bears together ranging in age from one to three years old, but this all depends on the individual characters and their behavior.

We don’t risk putting cubs into enclosures with much older bears as this could stress the cubs and could potentially lead to aggression from the older bears.

3. Being “Hands-On” Will Comfort a Lonely Cub but You Have to Know When to Take a Step Back

We have been fortunate that most cubs have arrived in pairs. This means they have each other for support and they have a playmate they can interact with throughout the day.

However, when young cubs are rescued on their own, our staff are a lot more involved and will comfort the cub when needed and offer he or she opportunities to play, which is highly beneficial for their development.

At our Vietnam sanctuary, cubs are hand reared by a dedicated staff member until they are between four and six months old. While necessary for an individual cub, the carer will be hands-on in bottle feeding and ensuring that they can safely play and explore their den.


By the time the bear is around four to six months old, they have usually become very boisterous and no longer require round the clock care allowing our staff to be take a step back.

By this time the cubs will have been trained to walk inside a feeding crate where they continue to receive milk, either still from the bottle or from a bowl. In the wild, when bear cubs grow older they become more independent and even in captive settings, they come to an age where they are less interested in their carer and prefer to interact with other cubs.

The bears we receive as single cubs do seek more comfort from their carers who will feed them milk from the bottle and sit with them at times during the day for play sessions. 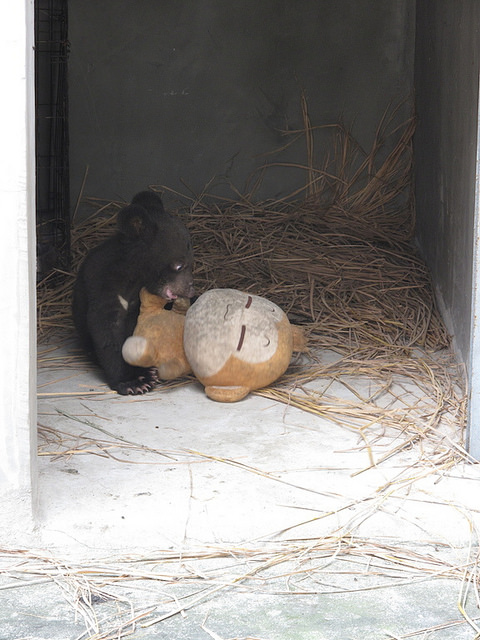 When the cubs are really young they receive towels and a fluffy bed which provides them with a comfortable and warm resting place. They are seen interacting with the bedding too, dragging it around or rolling on it. They are given small dog toys, like rope, small balls and a host of other treats. They are also offered banana leaves which they enjoy playing with – and the really small ones are sometimes given teddy bears or other stuffed toys to sleep with.

We are aware of bear cubs having been paired with dogs but at Animals Asia we view this as potentially a huge risk.

We have actually rescued an adult bear who had been attacked by dogs as a cub and he still had the most horrendous scars all those years later. Similar stories have been documented elsewhere. Using a human carer in these rare situations eliminates that risk.

5. They’ll Live With Us For 30 Years – You Have to Hope the World Will Change in That Time

Unfortunately, there are no safe areas in Vietnam to which rescued bears could be reintroduced. The illegal wildlife trade remains too lucrative and widespread. That said, cubs can expect to live up to 30 years so that situation could well change within their lifetimes.

However, even if safe areas were to be erected, it is still very difficult to reintroduce captive animals into the wild – particularly so when the animal’s formative years were spent around humans.

When cubs have been cared for by humans for many years, they are mostly unsuitable for release. They might come into conflict with people in rural villages which could result in them being killed.

We’ve rescued 32 cubs in Vietnam alone and they are all growing into strong, happy adult bears. We can never offer everything the wild can, but it’s the next best thing and a safe environment for these bears. That counts for a great deal.