Nowadays, when you are snorkeling in the Hawaiian Islands, unless you are in a protected area, you may be faced with the fact that the very marine animals have left the building.

I returned to the Big Island to go snorkeling after 15 years and was shocked at the absence of beautiful reef fish that had been so abundant earlier. The scores of jewel-colored fish that used to swim all around me were gone.

Returning our equipment to a Snorkel Bob’s shop, we found out the proprietor, Robert Winter is a dedicated conservationist and author of books on reef wildlife. For over twelve years, he has joined with other activists in mounting campaigns to protect the fish from collectors who are stripping reefs bare and transporting fish to the mainland for sale. Hawaii is ground zero in the global struggle to save marine wildlife.

Photo of Kimokeo Hawaiian Elder Courtesy of The Dark Hobby

Like the films, BlackFish and The Cove, The Dark Hobby, is an expose on the Native Hawaiian Elders, conservationists, and scientists who stop at nothing in their struggle to ensure the survival of these stunning tiny creatures – targets of a trade worth billions. Some species have been driven to extinction by collectors, and others are severely diminished. The collectors dive deep in the ocean, cast nets to gather fish, and prep them to ship to the mainland by fin cutting, which i like if someone cut off your finger. Then, they pierce the fish’s swim bladder with a needle. The fish are starved so they don’t foul the tiny amount of water they’re transported in and sealed in bags to ship globally. Many fish are dead on arrival at pet stores. Once in a tank or small bowl, the fish must endlessly swim around in a few inches of water. Thus, 90% of net caught fish die within a year of capture, creating a constant demand for replacement. Yet many of these fish, if left on the reef, can live 40 years!

Devastation to Wildlife and Reefs

Aquariums with colorful fish darting to and fro can be lovely, but we’re ignorant about how they got there. The aquarium trade has a devastating impact on Hawaii and reefs worldwide. 98% of marine wildlife in the aquarium pipeline (27 million at a time) are taken from the wild, and mostly from Hawaii. The Dark Hobby takes place there, ground zero for the worldwide aquarium trade, where catchers have been taking reef fish for global hobby tanks for decades. These fish represent 1,800 species, and the trade is stripping reefs bare. This reef crisis is virtually unknown to most, yet it is of immense significance to Hawaii’s ecosystem and our planet. The oceans are not a never-ending resource, our planet’s future is dependent on them and marine wildlife.

Plastic, pollution, Fukushima, and overfishing, the list goes on of things that are harming our oceans, but we are ignorant about the aquarium trade’s far-reaching devastation. Fish inhabit an underwater world of haunting beauty and aren’t that familiar to us. Yet the scores of marine species teeming in the depths are inextricably linked to us and our lives.

Reef fishes are herbivores, they eat the algae growing on the coral, keeping it in balance so the coral can live. Healthy reefs produce 50% of the earth’s oxygen. They also provide food and protection from floods and storms. When the fish are removed from the reef for sale, it affects the ecosystem’s balance and the coral dies.

In poorer countries, such as Indonesia, the Philippines, and Thailand, catchers use cyanide to stun fish for easy capture, leading to jaundice, early death, and killing reefs.  90% of imported aquarium fish in the U.S are caught with cyanide, according to a 2008 National Oceanic and Atmospheric Administration report.  Cyanide a highly toxic chemical harms fish and devastates the reef where they reside. Fish collectors in the aquarium trade capitals of the world (the Philippines, Sri Lanka, and Indonesia) spray cyanide in bottles to stun fish so are easily collected.

Aquarium fish are highly prized for their striking colors and dramatic shapes, so collectors are careful not to damage them with nets. In blast fishing, collectors throw dynamite onto a reef to blow up coral and force fish out for an easy catch.  This kills the coral and reef.

The Hawaii tourist trade is the lifeblood of the local economy. It will be heavily impacted by the loss of fish species and thus, snorkeling spots. Hawaii’s natural beauty is legendary worldwide and beloved by international tourists. The health of the reefs and the biodiversity they support are severely under threat by the removal of marine species.

In Thailand, the Philippines, Indonesia, the African coast, and the Caribbean, coral reefs are some of the most biologically diverse ecosystems providing critical habitat to 25% of all marine species, but they’re disappearing at an alarming rate. 30% of the world’s coral reefs died in the last 50 years, and 30% suffered severe damage.

Coral reefs are in decline in the U.S. and globally. Scientists warn that the existence of coral reefs is in jeopardy unless we protect them. Many grow close to shore in shallow water, and are vulnerable to human activities, including the exploitation of reef resources, fishing practices, gear, anchors, and touching and removing coral.

Recent scientific research reveals that fish are highly intelligent, as recounted in the New York Times bestseller, What A Fish knows by Jonathan Balcombe. They feel pain and recognize human faces. Archerfish passed self-recognition tests, seeing themselves in the mirror. Fish communicate by making noises and singing, as recorded by scientists at Perth University. They even make plans to hunt.

Solutions include ethical reef tourism, snorkeling, scuba diving, and underwater photography, which all far outweigh the income earned through aquarium collecting. The Hawaiians regard reef wildlife as their natural treasure, fish are a part of their genealogical history.

Some people view captive-breeding as a solution to this issue. Captive-bred ornamental fish production for aquariums is a multi-million dollar industry in the US. Annual sales from South Florida farms are $175 million annually and produce over 700 varieties.  However, these critters are still sentient beings. Breeding and raising them to live in a glass box is cruel. Even if it doesn’t put stress on the ocean and reefs, it does stress out the fish.

Technology is offering us solutions to keeping fish in aquariums, whether in public or at home. Reef cams in exotic locales stream the underwater live-action of reef wildlife in untouched destinations around the world. Reef cams like View Into the Blue offer so much live action that keeping fish in glass tanks is no longer necessary to see what’s going on underwater.

The focus of twelve years of legal battles and legislative campaigns has been on the supply side to halt or limit marine wildlife collection for the aquarium trade. Recently Earthjustice filed a lawsuit to force the state of Hawaii to comply with its’ own environmental laws regarding the aquarium trade.  A statewide poll showed the majority of Hawaii residents want the trade ended – but state employees craft rules to protect revenue instead of the reefs and wildlife.  Senate Bill 1240 made it all the way to the Supreme Court and won! Permits were no longer granted to collectors, pending an environmental review.

A Call to Action 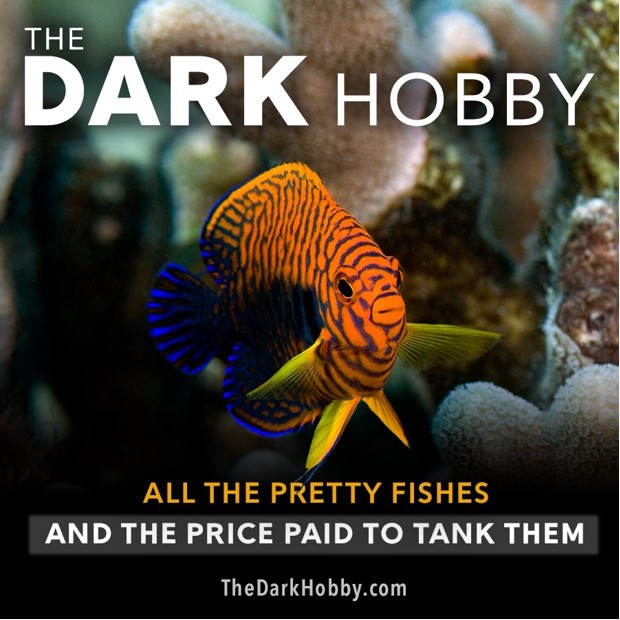 In June 2021, a tied vote allowed the Hawaii Supreme Court’s ban on collecting aquarium fish to lapse, halting the protection of reef wildlife. The Department of Land and Natural Resources may allow extraction for the aquarium trade again. But the activists are still fighting the supply side of the industry in court. Some conservationists will now focus on consumers and hobbyists with a critical message about how removing species from the reef is detrimental. The ocean isn’t a never-ending resource.

Tell Congress to pass legislation to protect reef wildlife from trafficking, and to expand marine preserves to preserve endangered species for future generations. To take action go to The Dark Hobby.com:  www.thedarkhobby.com, click on the Take Action tab, and sign the pledge not to buy reef wildlife. Spread the word about The Dark Hobby film and reef wildlife on social media with friends and family, and share flyers about reef wildlife online, and near pet and fish stores.