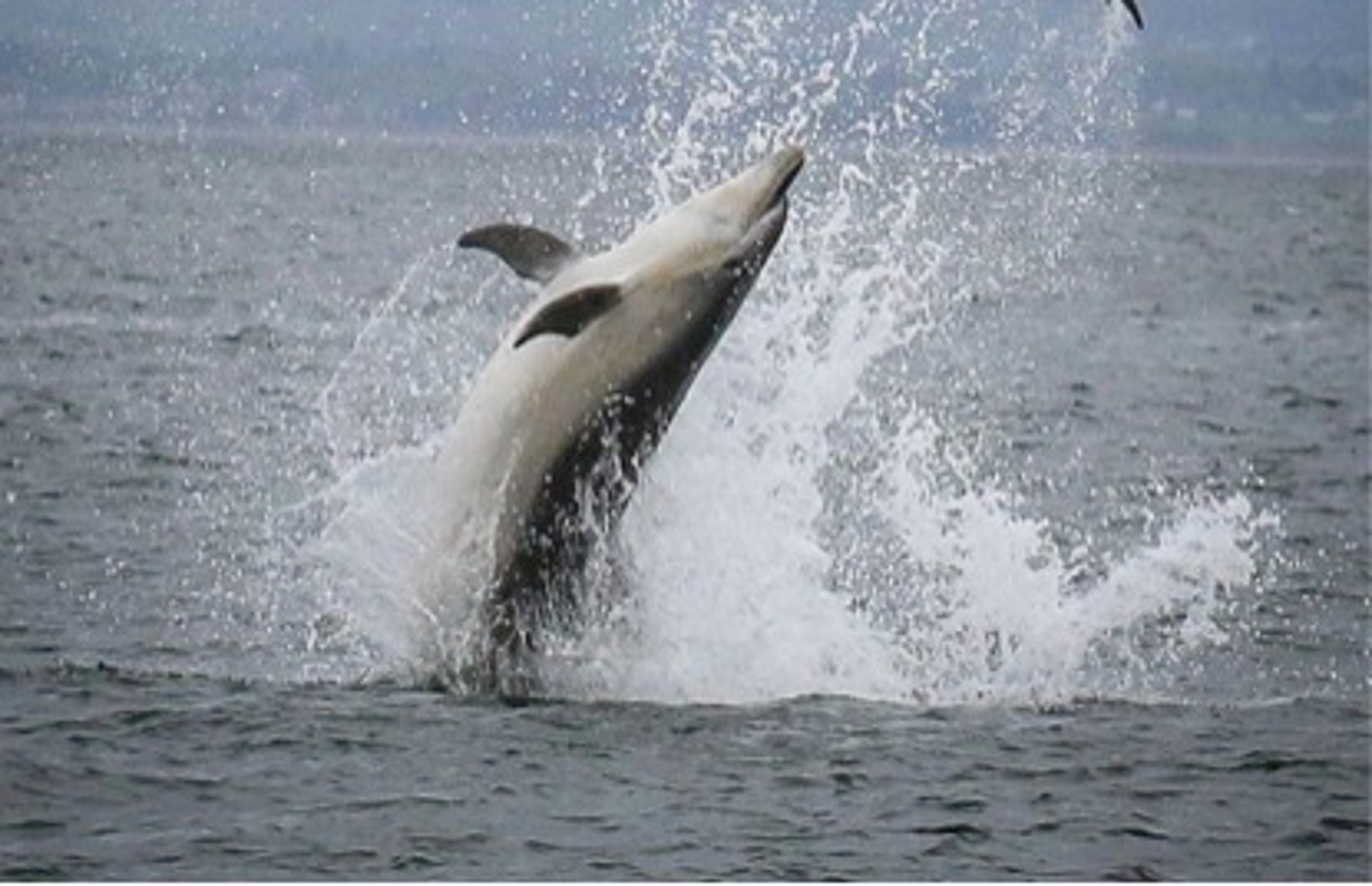 A clear, but cold, summer evening in northern Scotland. Night is just about to fall, and the sun is hovering above the horizon in an endless northern summer sunset. Walking along the beach, there is a sudden disturbance in the water. Ripples spread and a fin, two fins, slice through the glassy sea, mere meters from the shore. All that can be heard in the stillness of the evening is the blows of breath as the animals surface, mothers, and calves in perfect synchrony. Every so often there are sudden skirmishes, chases after fish, salmon tossed into the air, and cartwheeling leaps and breaches, for seemingly no other reason that pure exhilaration. 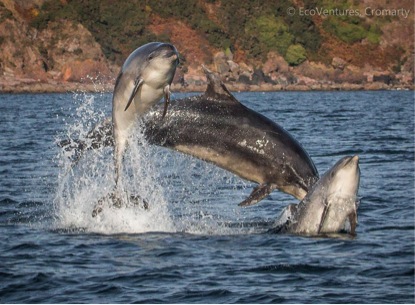 If I were to ask you where bottlenose dolphins lived in the world, chances are you’d say Florida, the Caribbean, Australia or other such warm and sunny places.  But scenes such as these can be experienced year round in the Moray Firth, the north-eastern coast of Scotland, UK, which is home to the most northerly resident group of bottlenose dolphins in the world.

Living in waters as cold as 7oC (45o F),  approximately 200 individuals live in the area all year round. As an adaptation to the cold waters they can grow to a massive 4 meters (13 feet), and weigh up to 650 kilograms (1,400 pounds), nearly double as large and fat as their warm- water cousins. Seeing these enormous top predators feeding and playing is a breath-taking sight, and a thrill that has brought myself, and many thousands of others back year after year. Increased marketing and awareness of this stunning area of coastline, with its untouched nature and wildlife, has increased tourism. This has not only brought awareness and appreciation to this special area but has brought jobs to local people and significantly improved the economies of many small villages. 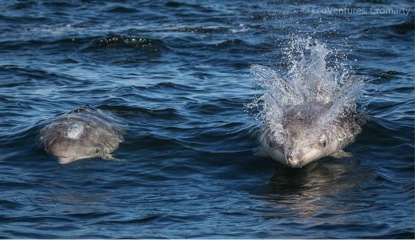 In recognition of this area’s outstanding natural beauty and importance for this unique population of dolphins, it has been awarded the highest designation under European Law: a Special Area of Conservation (SAC).

You would think, in recognition of this area’s unique and untouched nature, that its rich ecosystems would be respected. You would think that such a designation as a Special Area of Conservation, would exclude the area from harmful human activities. Otherwise, what would be the point of having a conservation area?

You would have to think again.

Here, right in the middle of the most important area for the dolphins to breed and feed, a proposal is looking likely to be accepted as a place for ship-to-ship oil transfers. Leading academic Professor Paul Thompson, who has studied this dolphin population for over 25 years, and published multiple peer-reviewed journal articles on marine mammals, described the proposal as:

“The least appropriate location on the whole coast of Europe to undertake this activity.” 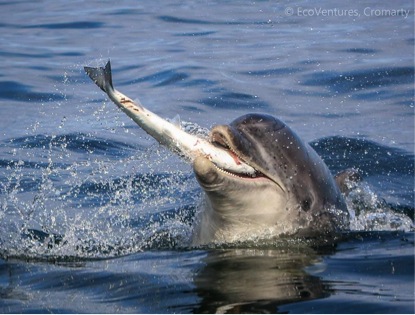 But what does a proposal for a ship-to-ship oil transfer actually mean? In a nutshell, this is a proposal to transfer eight million tonnes of crude oil annually between oil tankers, anchored as close as half a mile away from a vitally important feeding ground for dolphins. By being able to do this activity at sea, the oil companies can do it more cheaply: at the expense of the environment. Aside from the obvious risk of an oil spill, which would be catastrophic for the ecosystem, up to two million tonnes of dirty water (untreated, contaminated ballast water) will be discharged directly onto the dolphins each year. In addition, the operation would cause huge amounts of underwater noise pollution, which is known to stress marine mammals such as dolphins due to their dependence on sound for communication. The activity would also release Volatile Organic Compounds, for which the effect on dolphins has never been researched.

Dolphins are still suffering from the Gulf of Maine oil spill, and severe health impacts were documented in the aftermath including lung disease and reproductive failure. The proposal claims to have addressed environmental safety concerns, but the evidence that has been put forward by independent organizations simply does not support this. With 180,000 tonnes of oil being transferred near a rocky coast in shallow waters, the possibility of a catastrophic event is not far away. Ship to ship oil transfers are not safe procedures: in 2015 there were 81 collisions between tankers undertaking transfers, and there has been 83 so far this year worldwide. Why would anyone risk this in such an area?

We know that dolphins, as long living mammals that are slow to reproduce, are vulnerable to these kinds of threats. We also know that this proposal would impact not just the dolphins, but a host of other wildlife. The area is also a Special Area of Conservation for subtidal sandbanks, which are important for fish breeding, as well as an important breeding area for seabirds, seals, and porpoises. 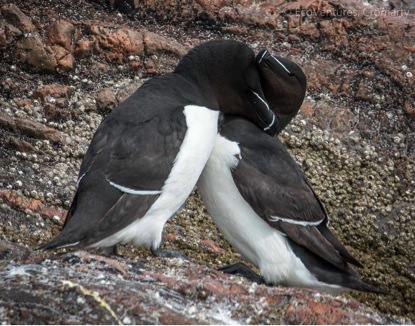 The opposition to this proposal has been colossal. 340 objections were raised during the consultation process, and complaints and concerns have been raised by a host of organisations, including conservation groups such as WDC (Whale and Dolphin Conservation), RSPB (the Royal Society for the Protection of Birds), the Scottish Wildlife Trust, Aberdeen University and the Scottish Environmental Protection Agency. In addition, there is extremely strong local opposition to the proposal, which makes it even more outrageous that it is being pushed through. Despite multiple complaints, the Port of Cromarty Firth (who lodged the proposal) has refused to requests for a meeting, left letters unanswered, and appear to have complete disregard for the environment and the local people who love it.

What Is Being Done?

A small group of extremely dedicated volunteers has set up ‘Cromarty Rising’, a protest group in opposition to the proposal. As well as starting a petition, spreading awareness and repeatedly filing and coordinating objections to the proposal, they now plan to mount a legal challenge if the application is not withdrawn. They have set up a crowdfunding campaign to fund the legal costs. This looks to be the best chance possible for the local people to defend their community, and defend their environment, and stand up to these big businesses.

All your money will be put directly towards the legal costs to mount a legal challenge to this proposal. Even a tiny donation will make a huge difference, and in so doing, you would be helping safeguard an area of outstanding natural beauty and rich wildlife, for generations to come.