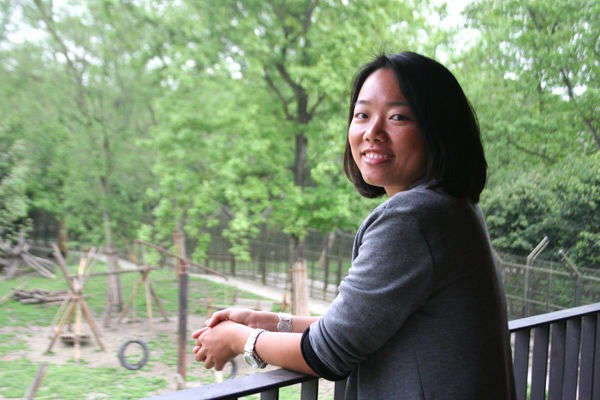 International animal welfare organization Animals Asia’s employees hail from all around the world, but most of the people who work for the Asia-focused nonprofit were actually born where the NGO is based, in China.

Lucky Wu is Animals Asia’s China Public Relations and Education Manager. She was born and grew up in Chengdu, where Animals Asia’s China Bear Rescue Center is located. The China Bear Rescue Center houses bears that have been saved from life on bear bile farms—where they were cruelly kept in cages and painfully farmed for their bile. The bile is used in traditional Asian medicine despite the existence of synthetic and herbal alternatives.

Lucky enjoys getting involved with Chinese media, schools, public, celebrities, and corporate representatives on behalf of the animals. Her current work includes collaborating with her team to develop the strategy and annual plan of action for the organization’s education, public relations, and marketing work in China.

Says Lucky, “It’s my great honor to get involved in the core team working on the strategy to end bear farming in China.” She adds, “I’m so lucky that I’ve experienced the two biggest waves for ending bear farming in China, beginning with the bear bile company, Guizhentang, applying to be added to the stock list.”

The recent application by pharmaceutical company Guizhentang, owner of one of the biggest bear bile farms in China, for an IPO was met with fierce opposition by the Chinese public and media. This massive countrywide condemnation of bear farming was an unprecedented indicator of the momentum and strength that the animal welfare movement in China has developed. “…there are millions of people in China as well as outside of China calling for an end to bear farming. They are always with me to fight for a bright future for the bears. And I do believe we will win.” Lucky states.

After living in Beijing for some time, Lucky moved back to Chengdu in 2010 to join Animals Asia in her current role. Comments Lucky, “I left Chengdu around ten years ago to attend university. Although Chengdu is the place where I grew up, I felt strange in the beginning when I returned from Beijing because the city as well as the people changed a lot during the years I was gone. Working at Animals Asia gives me an opportunity to get to know the city and the people again from a different angle.”

In addition to living in Beijing and Chengdu, Lucky lived in Nanchong, a city in the Northeast of the Sichuan province from 1998-2002. It was while living in Nanchong, as a university student, that Lucky began to learn about environmental issues from her teacher Ramy Innocencio, who was a member of Peace Corps at that time. 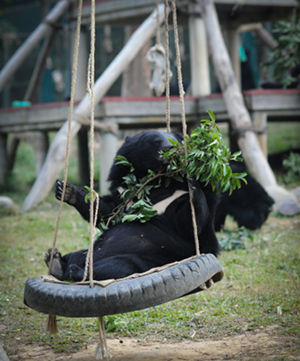 About working in the field of animal welfare, Lucky comments, “Lvqiu Luwei, a famous journalist in Hong Kong said: ‘It looks like we are working on animal welfare issue but actually we are working on the issue of the society and people.’ The concept of animal welfare only exists in the context of the impact caused by human being on animals. It is the process to promote (or at least to prevent from being worse) the moral standards of the society via working on animal welfare issues. I don’t have the intention to force anyone to be an animal lover but that doesn’t mean those who don’t like animals can be cruel to them. The respect to people, to animals and to the environment is the basic need for creating the harmonious.”

Working at Animals Asia’s China Bear Rescue Center, Lucky sees the bears the organization helps on a daily basis. “The bears have new lives at the rescue center, showing how forgiving and gentle they are. I feel there’s always a reason for hope.”

As part of her job, Lucky finds herself interacting with people in China from a variety of professions and age groups—it inspires her to see so many people from different backgrounds dedicate their time and resources to helping end cruelty to animals. She is excited to be witnessing firsthand the incredible growth of the animal welfare movement in China.

Before coming to Animals Asia, Lucky volunteered and worked for other animal welfare nonprofits in the areas of education and legislation. Says Lucky, “Animals Asia is working on a very challenging and complicated problem in China…. This is a great team with great passion and professional skills. It’s really great to be a member of this big family.”

Those interested in helping the moon bears can participate in Animals Asia’s Beards for Bears campaign, which runs through the end of June. Animals Asia has partnered with US-based skateboard and apparel company Hendrick Boards for the international campaign that invites men to be their hairiest for the sake of endangered moon bears. To participate, men need only register at the website with a photograph, then invite friends, family and coworkers to sponsor them while they grow their beards. Women may also register as Beards for Bears ambassadors. Contributions will help fund Animals Asia’s ongoing work to end bear bile farming.