At the Grandview Aquarium in Guangzhou, China, a polar bear named Pizza spends her days slumped in the corner of a tiny glass enclosure, lonely and depressed. She’s been living here for nearly a year and every day is just as miserable and isolating as the next. With only 430 square feet to move around in and only a shallow pool for entertainment, it’s easy to see why Pizza isn’t happy here. The aquarium is located in a shopping mall, so she never gets to see the sunlight or breathe fresh air. Frankly, her life is as far away from natural as you can get and it’s already taking a toll on her mental well-being.

Despite her heartbreaking situation, this doesn’t stop tourists from flocking to her enclosure to snap selfies. In fact, she is the aquarium’s main attraction. When you look closely and you see what kind of life she’s living and how it’s affecting her behavior, you’ll soon discover that Pizza’s life is anything but attractive.

No animal deserves to live this kind of life. It’s cruel and unnatural and unless we do everything we can to help, Pizza is going to end up with a similar fate to Arturo, the former ‘’world’s saddest polar bear,’’ dying alone and miserable. 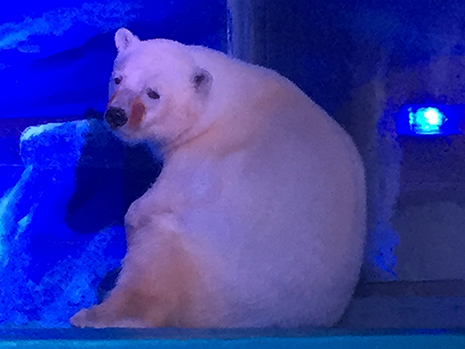 What’s So Bad About a Pacing Polar Bear?

Like most wild animals, polar bears require far more than is provided to them at a zoo – especially this zoo. Without care, attention, space, stimulation and natural light, a polar bear can never thrive. According to spectators, you can already see the negative effects life in captivity is having on Pizza. They say they’ve seen her pacing back and forth in her enclosure as well as scratching at and banging on the walls. 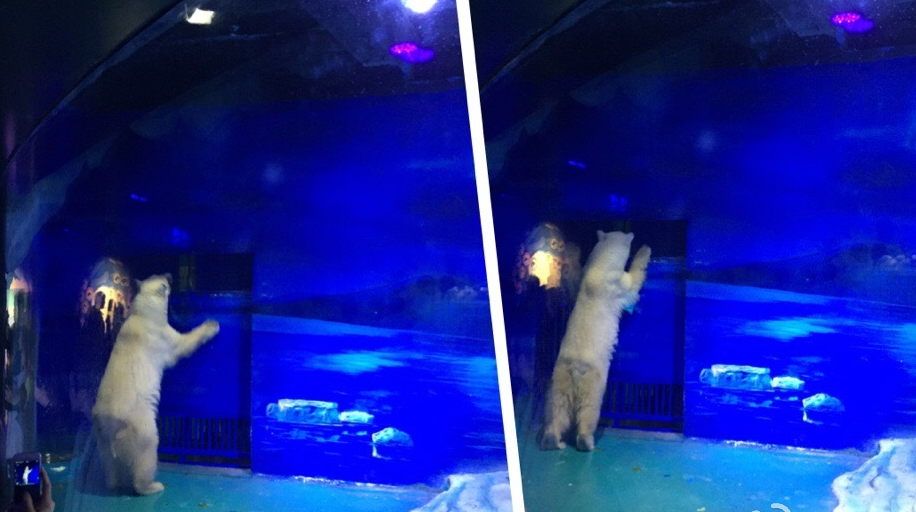 When animals are confined to tiny enclosures with no stimulation, they develop symptoms of what is known as ‘’zoochosis,’’ which is basically abnormal animal behavior, thought to be the result of deep mental distress. They develop repetitive behaviors to cope with their artificial living conditions and this is what Pizza is doing. According to Polar Bears International, “Some 85 percent of North American polar bears [in zoos] do it, devoting nearly a quarter of their ‘active day’ (i.e. the time they spend alert and moving) to this behavior.” That’s right the “active” part of this polar bears day is comprised of mindless, repetitive pacing. This is hardly what an endangered wild animal deserves.

Sadly, Pizza isn’t the only one suffering at The Grandview Aquarium. Many other animals here including beluga whales, walrus calves, arctic wolves and foxes are displaying symptoms of zoochosis as a result of their unnatural living conditions.

A Better Life is Waiting for Pizza

From videos taken by Animals Asia, a nonprofit organization dedicated to ending animal cruelty in the continent, it’s clear that Pizza is depressed at this zoo. Thanks to these videos going viral, the Yorkshire Wildlife Park in Doncaster, England got to hear about Pizza’s story and they offered her a permanent home at their sanctuary. Here she would live in a 10-acre habitat with two lakes, at a sanctuary designed for rehabilitating polar bears. In order for Pizza to relocate to this safe haven, however, the park needs donations to cover the transport and the aquarium’s permission.

Here, Pizza would be able to live a happy life with her own kind. She’d have the freedom, stimulation, and the care she deserves. She’d have fresh air and sunlight and she wouldn’t have to put up with strangers ogling at her, shouting at her, or tapping on her enclosure. Most importantly, she’d no longer be known as the ‘’world’s saddest polar bear.’’

How You Can Help Pizza

If you would like to help Pizza the polar bear, please sign this petition asking Cui Tiankai, ambassador of China, to the U.S., to close the Grandview Aquarium and ensure the animals imprisoned there get the help and care they deserve.

To increase your impact, please share this article and let’s get as many signatures as we can. It’s not just Pizza who’s depending on our help … all the other animals imprisoned at the zoo are too. They need our help and without it, there’s a high possibility they’ll spend the rest of their lives living in lonely and miserable conditions at this appalling zoo.

Grandview Aquarium is hesitant to retire their animals despite push back from animal activists and organizations because they continue to receive funds from people paying to see these animals. We need to spread the word that this is animal abuse, not entertainment. When the buying stops, so can the suffering.