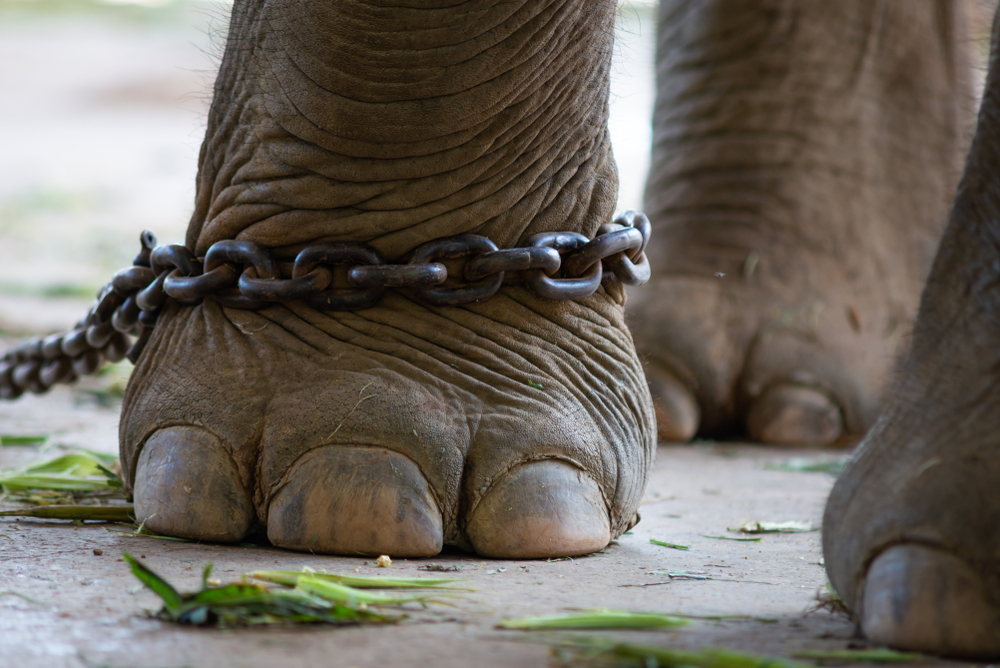 A young elephant is experiencing harsh punishment after injuring and attacking two tourists in Phang Nga. Plai Thanwa, the eight or nine year old elephant, has all four of his legs chained up and bloody wounds on his head.

Thanwa was giving a ride to two Italian tourists along with his mahout (trainer) when suddenly he shook all three them off of his back and onto the ground. He proceeded to attack one of the tourists, Trofa Manuel, using his tusk. Both tourists sustained serious injuries in the assault. According to a petition set up to help the elephant, there is a possibility the tourists may have been drunk while riding Plai Thanwa and scared him, although that is not known for sure.

The Phang Nga Livestock Development Office chief Saroj Jittakan said that the camp had such a high demand for the tourist site, that elephants who were normally used for labor were sent for tourism service. He also believed that “the incident happened as the elephant is not familiar with elephant rides with tourists,” and that the “incident is an indication of the risks involved.”

The mahout has reportedly been charged with recklessness causing injury, but unfortunately he is not the only one taking the blame. This young elephant did not have the proper training for this service and by nature, he was never meant for it to begin with. Elephants undergo harsh, isolated conditions to train for giving rides in the tourism industry as they are robbed of mobility and social contact with other elephants. The process to get elephants accustomed to human interaction is called “Phajaan,” and it involves taking  baby elephants away from their mothers to break their spirits. Sometimes the force needed to get these animals to adapt to the desires of the trainers is so strong that they stab them with bull hooks.

If that doesn’t sound cruel enough, there are situations similar to this one that proves that the exploitation of these elephants is wrong and dangerous. At a circus in Indiana, an elephant became so frightened while giving a ride, he collapsed a mobile staircase, which injured many children.

This young elephant is being tortured for the lack of responsibility taken by members of the camp and the exploitation of elephants in the tourism industry. If you believe this is unfair, sign this petition asking that Thanwa be freed from his chains, receive medical attention, as well as demanding an end to elephant riding!