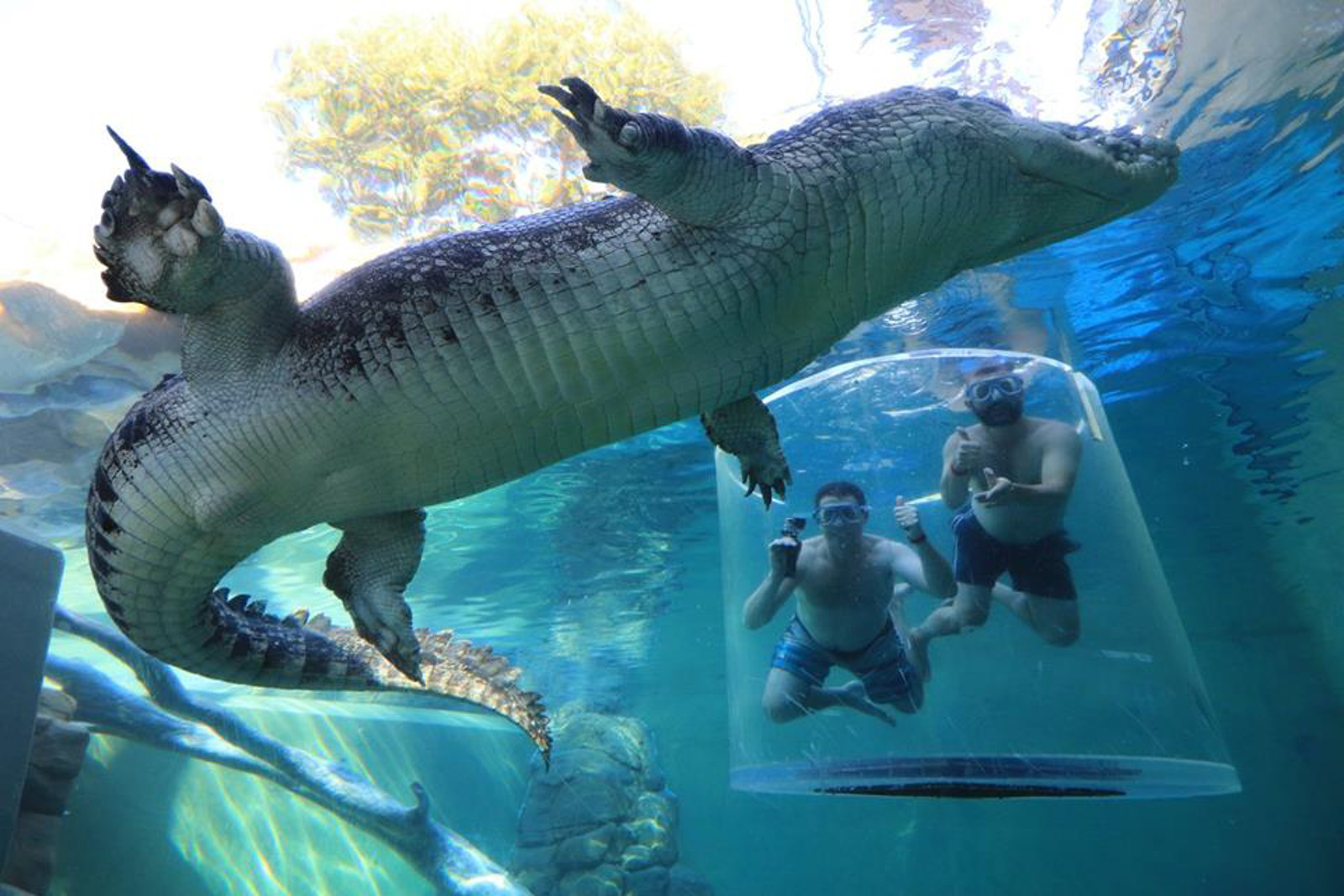 Getting the chance to see a wild animal up close and personal is something that most people can only dream of doing. Or at least, that’s what many would assume, after all, it’s not every day that you would come into contact with an elephant or lion outside of the very controlled grounds of a zoo. Interestingly, it seems that this is actually no longer the case as roadside zoos and unconventional wildlife interaction attractions appear to be popping up left and right across the world. In the U.S., we’ve seen full-grown tigers being held captive in truck stops to draw crowds, in Thailand elephant attractions where people can get messages from these giant animals are common, and in Norway, there’s even a hotel that lets you sleep in close proximity to wolves. While all of these interactions seem pretty ridiculous, there is one particular facility that has us completely confounded.

The Crocosaurus Cove in Darwin City, Australia boasts itself as the “largest display of Australian reptile,” featuring a large collection of saltwater crocodiles. Not only does this facility, which they describe as the “ultimate urban wildlife experience,” showcase a whole slew of captive crocodiles … but it allows people to swim with them in what they call the “cage of death.”

We don’t know about you … but we think this looks like a pretty terrible idea. 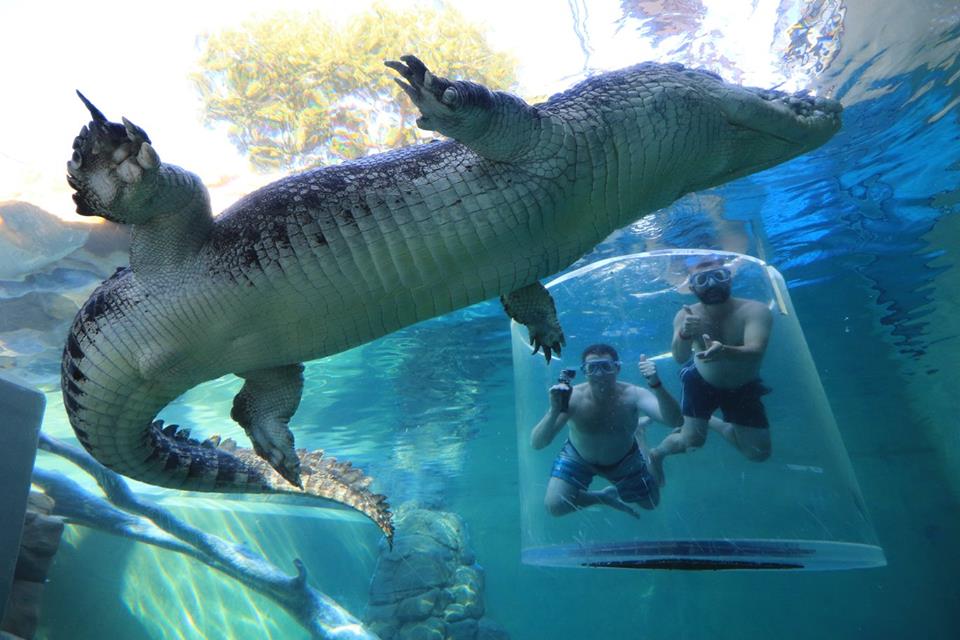 Placing tourists into a giant glass tube, the “cage of death” experience enables people to get up close and personal with hungry, captive crocodiles during feeding time. 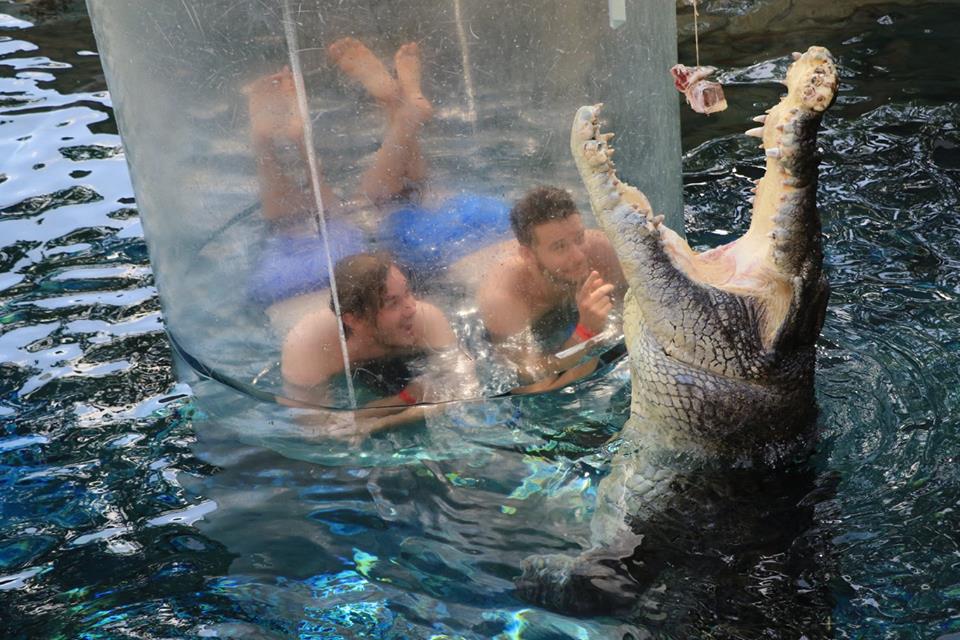 In addition to this thrilling attraction, Crocosaurus Cove also offers opportunities for people to “jump on our ‘Fishing for Crocs’ platform and smile for the camera while holding a baby Saltwater Crocodile.”

Yup, that’s right, when you’re done watching a 14-foot-long crocodile thrash around in a small tank, you can hold a baby croc and take a series of super fun and candid selfies to prove that you are, indeed, the master of all predators!

While there are many things blatantly wrong and dangerous about this facility, perhaps the most dangerous aspect about this entertainment park is the fact that it trivializes the value of crocodiles. These are highly dangerous animals that play a vital role in their native ecosystems. Taking them from the wild and putting them on display in a tiny tank – where they are constantly surrounded by squealing tourists who likely take every opportunity they can get to bang on the glass or grab the attention of these animals, can have a devastating consequence on their native habitat. Further, by allowing people to simply pay and get face to face with these predators, it sends the message that they are not to be taken seriously and they are little more than playthings and props for our own personal entertainment.

All wild animals deserve better and it is up to us to hold facilities like this accountable for their reckless and destructive business. The best way you can help put an end to the ridiculous Crocosaurus Cove is to boycott this facility at all costs and spread the word. Attractions like this can only stay open if they have paying customers. When the money stops, so can the exploitation.

Share this post and encourage others to tell the world no animal deserves to suffer for the sake of our entertainment.