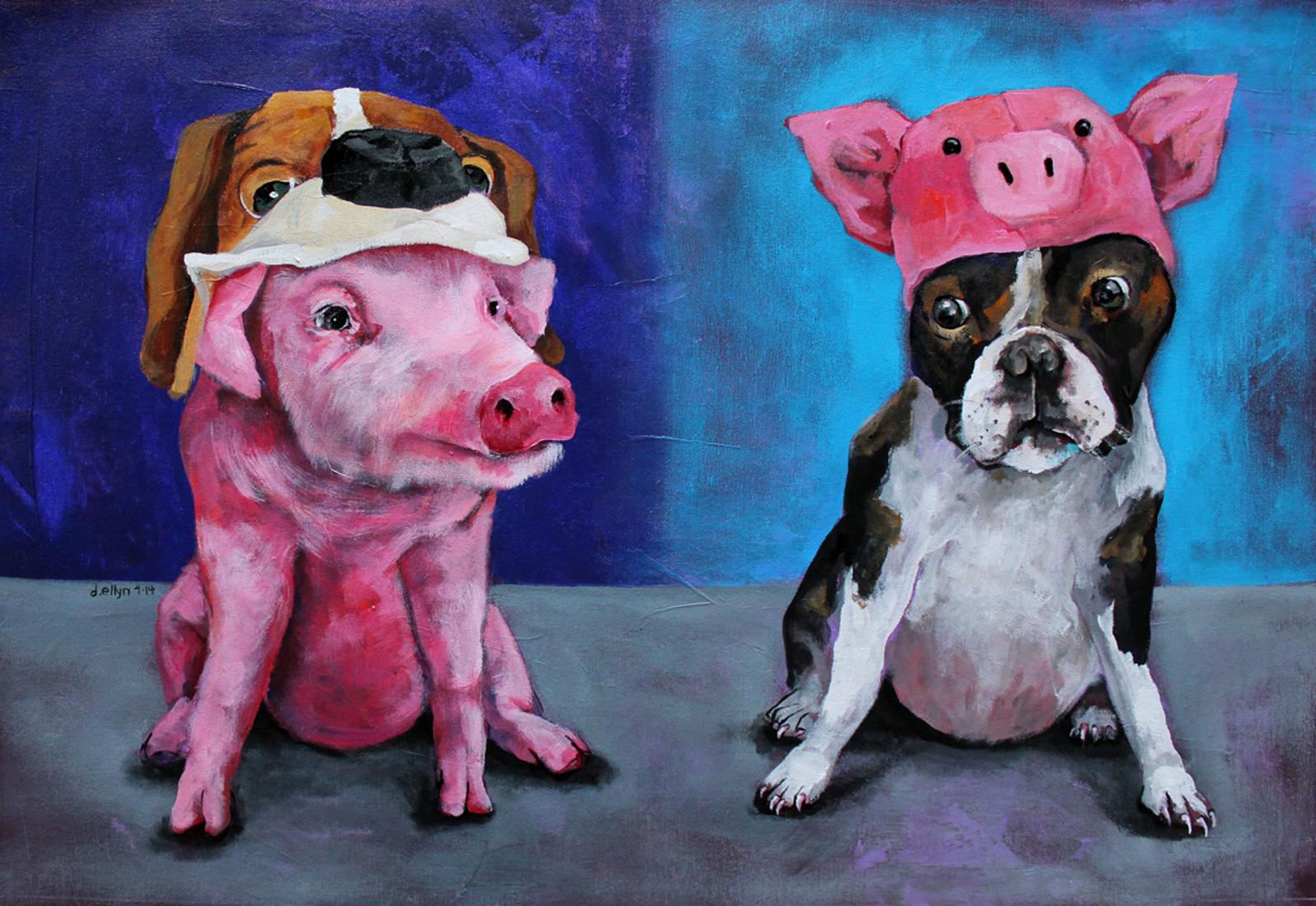 Farm animals are rarely given a second thought in today’s society as their plight is hardly ever focused on by the mainstream, or more public world. This is mainly because the suffering of farmed animals is hidden from view in factory farms, and as the saying goes, what’s out-of-sight is out-of-mind.

As a result, a fissure opens up, cultivating an often strong disconnect between the “products” that end up on grocery store shelves and on dinner, lunch and breakfast plates and the animals who these parts and pieces once belonged to.

We forget that a cutlet and a brisket once came from a cow, or even a calf, that bacon and loin chop were part of a pig at one point and that a drumstick, thigh and wing all once made up a full, living chicken. Or, perhaps we don’t forget and just choose to ignore the reality of it all – that almost all animals sold in stores and restaurants come from the most deplorable conditions and suffer repeated abused hidden under the guise of “industry standard.”

It is this disconnect that full-time Washington D.C.-based artist Dana Ellyn is seeking to close with her stunning and thought-provoking paintings that weave activism and art.

Ellyn has always had an affinity toward animals, and most especially farmed animals. She considers herself to have been “a vegetarian at heart” since she was a child, as she tells OGP.

“I was constantly getting in trouble at the dinner table for picking at my food. ‘Stop dissecting it and just eat it’ is something I remember hearing often. I’d cut my meat into minuscule, nearly shredded, size pieces and turn them around for inspection on my fork before putting it in my mouth. My meat had to be well done (something close to charred) so that I didn’t have to face any oozing blood,” Ellyn says.

For 15 years Ellyn has been a dedicated vegetarian, dabbling with the vegan lifestyle from time-to-time until she finally went all in five months ago. Two moments marked this changed – one after reading “Eating Animals” by Jonathan Safren Foer and another after realizing her disgust at biting into a veggie dumpling filled with egg at a Chinese restaurant.

The way she lives and thinks about animals has heavily influenced her artistic work.

“Animals have been making cameo appearances in my art for years. But, it wasn’t until my exhibit in 2013 exhibit as part of DC’s Meat-Free week that I really went whole-hog on the animal themed paintings.  Once I started painting these works about animal rights I couldn’t stop. I didn’t realize I had so much to say on the subject and how much satisfaction I’d get from painting them and from discussing them with viewers,” Ellyn tells us.

Her images are certainly not sugar-coated messages of compassion – they hit hard at the issues so many choose to ignore or simply aren’t aware of yet.

As her Facebook page bio so aptly reads, Ellyn “delivers hard slaps to myths of all kinds – from religion, to politics to what it means to be a woman … love it or hate it, she definitely starts a dialogue.”

“My art is very content and story driven,” Ellyn says. “I only paint about things that I feel something about … that has included vegan/vegetarianism, politics, religion to lighter and more fun subjects like drinking. But they all *mean* something to me. Therefore it is a natural connection for me to not only paint about things but also get actively involved in the causes and activities too.”

Although Ellyn paints with a passionate force for social and animal issues, her work on these issues does not stop once the canvas is done and dry. Whenever she can, she uses her art as a way to raise funds for animal rights causes including The Kindness Collective and Compassion Over Killing.

Through her work, she hopes that people reconsider the meat-filled plates before them and “lose their appetite for meat” when they see her paintings, Ellyn tells us.

However, she does stress that “you don’t have to be a vegetarian or a vegan…you can simply be more mindful with what you eat.”

Discover a selection of Ellyn’s animal activism-focused paintings below to see farmed animals in a whole new light. 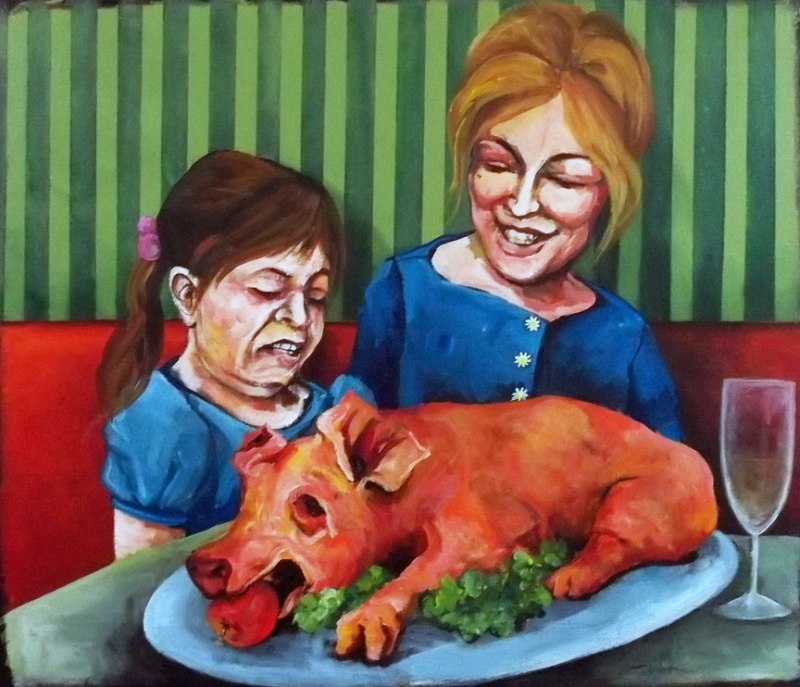 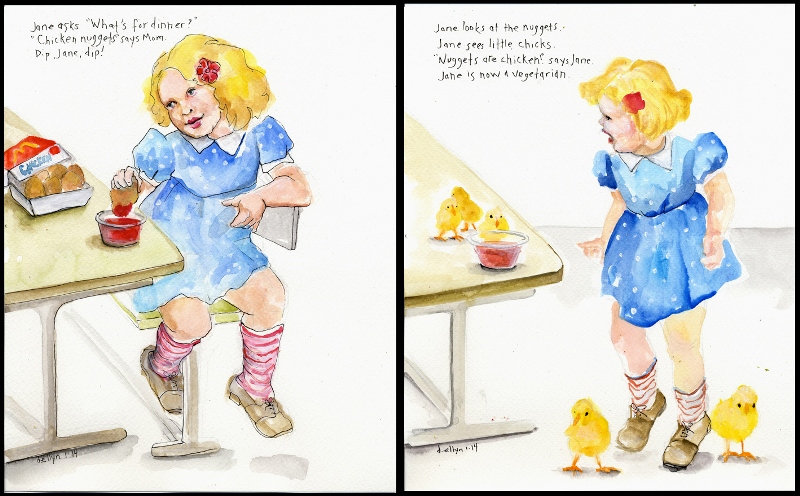 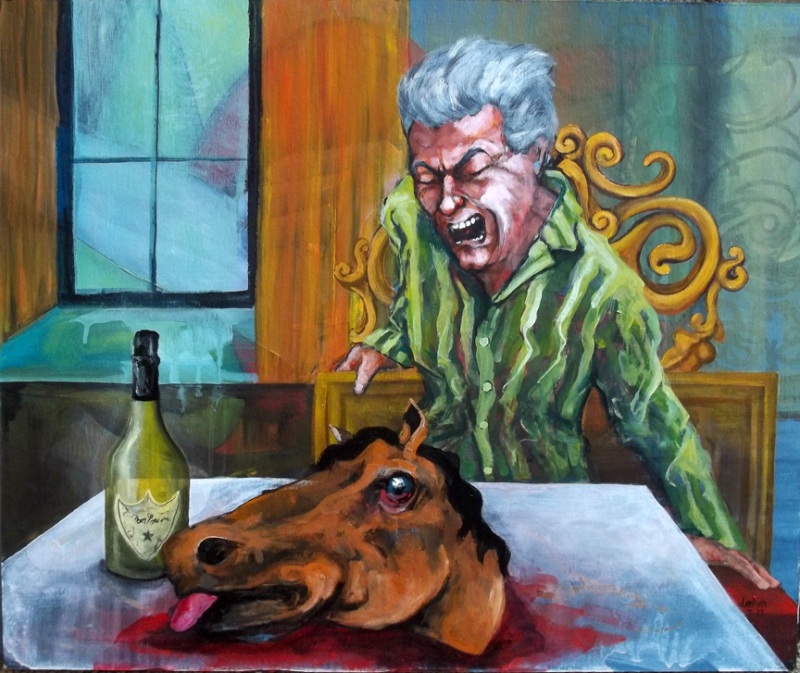 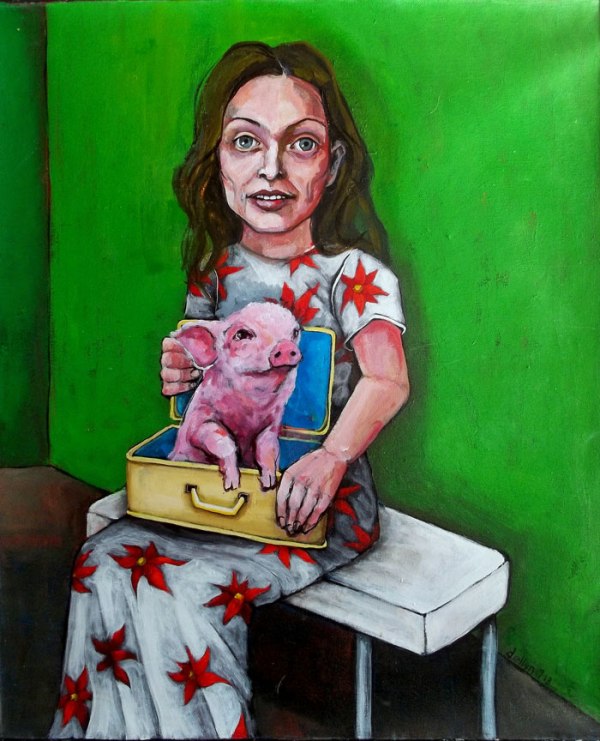 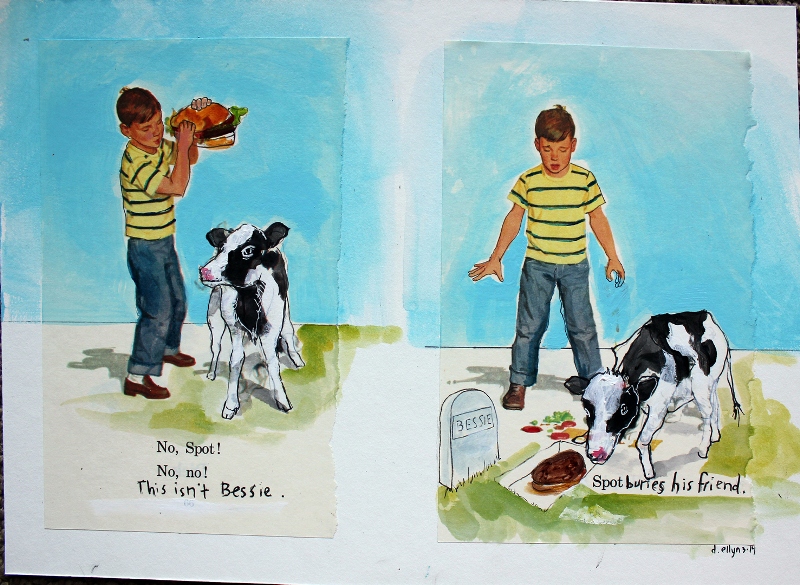 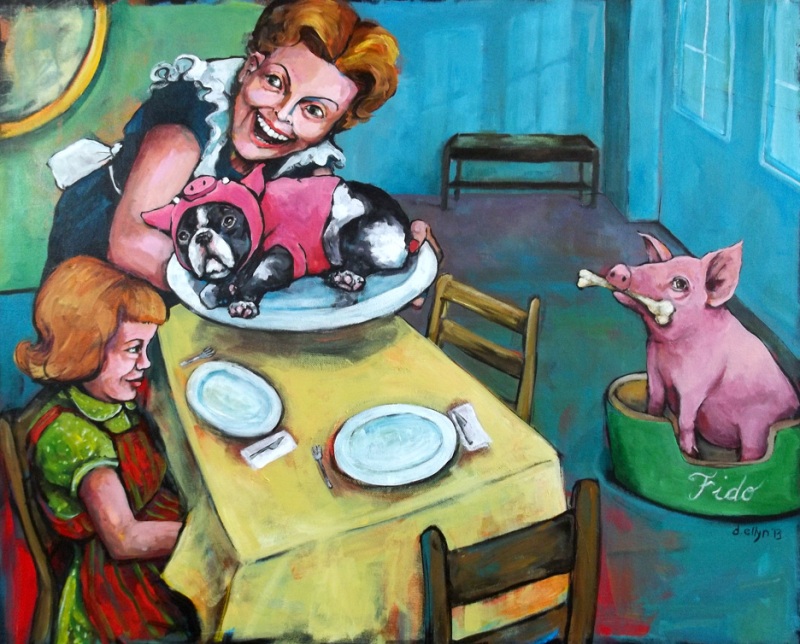 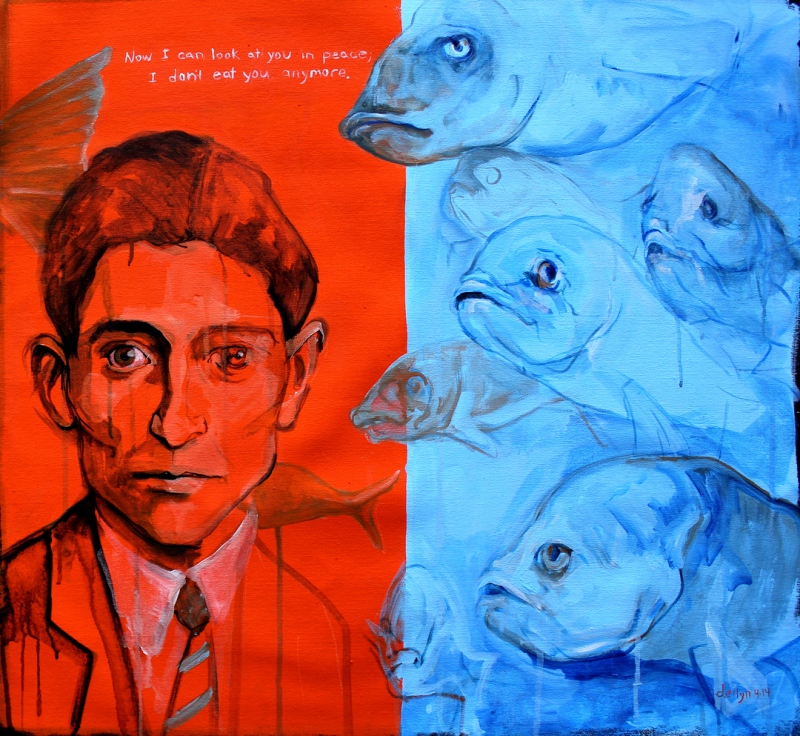 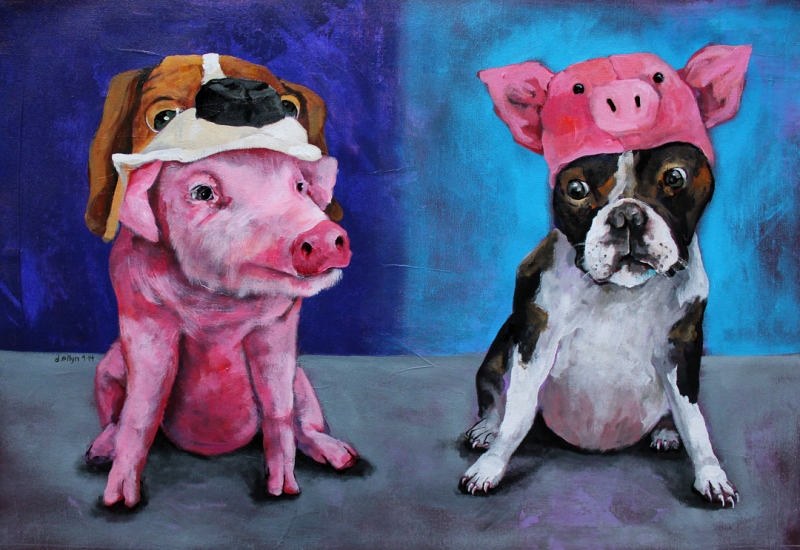 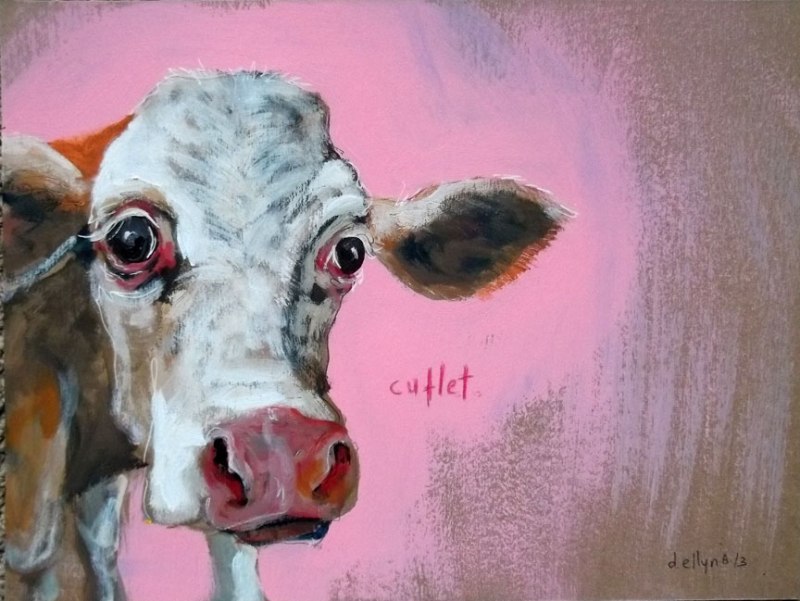 View more of Ellyn’s work (and purchase paintings) on her website. Keep up with her artistic journey via Facebook.