Oliver: A New Life For a Broken Bear 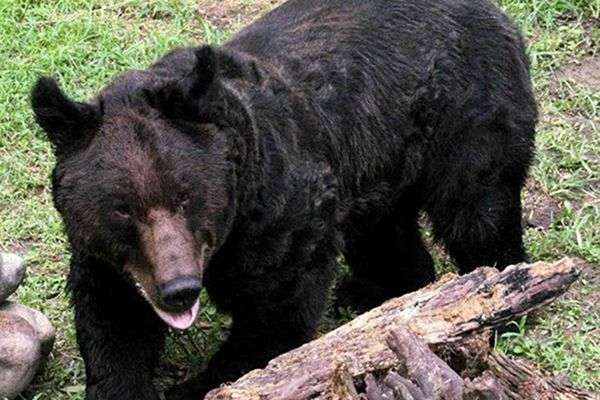 A brown bear’s lifespan is only approximately 30 years, so when Animals Asia staff learned that Oliver, rescued from a bear bile farm in China, had spent as many years in cages, they were shocked to say the least. The miracle of Oliver is that after surviving decades of being painfully farmed for his bile, he is now enjoying a happy, peaceful, and playful life at Animals Asia’s China Bear Rescue Center, a beautiful and fun-filled sanctuary for bears in Chengdu.

Oliver is one of ten bears that were rescued in April 2010 from a bile farm in Shandong Province, China. Like the other bears at the farm, when Animals Asia staff arrived, they discovered Oliver suffering from just having had a “full metal jacket” removed from his body. The jackets had kept dirty and painful latex catheters in place in the bears’ gall bladders. Knowing the jackets were against regulations, the farmer had ripped them off prior to the arrival of Animals Asia’s staff, causing the bears even more pain and suffering. When staff met the bears, they found them with scars around their bodies and moaning in pain.

Oliver’s story of incarceration is one that is very sad but true for thousands of bears across China who live in tiny cages while having their bile drained through catheters or holes in their abdomens. The bile is used in traditional Asian medicine despite the existence of many herbal and synthetic alternatives.

Animals Asia checked the bears’ health while they were still at the farm and prepared them for the 1,500 mile journey home via a convoy of trucks. On the way to the China Bear Rescue Center, however, Oliver showed signs of distress—panting, hot, and refusing to eat. Animals Asia vets Monica and Heather assessed that he required life saving surgery right there in the back of the truck. However, to complete the surgery successfully, the vets needed a tank of oxygen. Thanks to the persistent efforts of Animals Asia staff and willing local police, the truck was swiftly escorted to a nearby hospital where curious doctors looked on as Heather and Monica performed the surgery. After four hours, a metal coil was removed from Oliver’s abdomen, along with his gall bladder, and the senior bear’s life was saved. Because of the compassionate efforts of Animals Asia staff and generosity of local police and doctors, Oliver lived to see another day, and a new life that awaited him at the China Bear Rescue Center.

Despite stunted legs and a deformed body, resulting from his past life in cages at farms, Oliver enjoys his days of play as much as the next bear at the sanctuary. When first released from his den, he swaggered into the enclosure, stretching his old body into the air to retrieve juicy tomatoes and ripe fruit from the tops of hanging logs, swam in refreshing water, and lay in the grass. It was a joy to see for Animals Asia employees, including Founder and CEO Jill Robinson who said, “There are simply no words in the English dictionary that can adequately describe how my heart lurched with love and affection for a bear in his twilight years who was so much enjoying his freedom at last. The sun shone, the pool glistened and Oliver, our ‘broken bear,’ smiled for China as his feet got wet.”
Two years later, Oliver is still going strong—soaking in the sun and enjoying a life of relaxation and play at the Animals Asia sanctuary. Staff enjoy the antics of “Ou Di Wa,” Oliver’s Chinese nickname. One time, playing with a big tire, Oliver managed to get the giant rubber toy stuck around his belly. Luckily a vet was able to cut it off. Oliver’s human friends’ favorite funny memory of him involves a bamboo swing. Secured by four ropes, one at each corner, Oliver managed to turn the swing until the ropes all twisted together. Letting go, Oliver got quite the surprise when the swing quickly un-spun in front of him, narrowly missing his nose! The team has since attached tubes to each rope to prevent him from doing this again.

You can watch a video of Oliver enjoying his new life at the sanctuary below, narrated by Jill Robinson.

The rescue of ten bears from the farm in Shandong Province, and Oliver’s story, are featured in filmmaker Martin Guinness’ documentary about Animals Asia, “Cages of Shame” which recently won the HSUS ACE Documentary Film Grant and is currently being shown in screenings around the world (please visit our website for details).