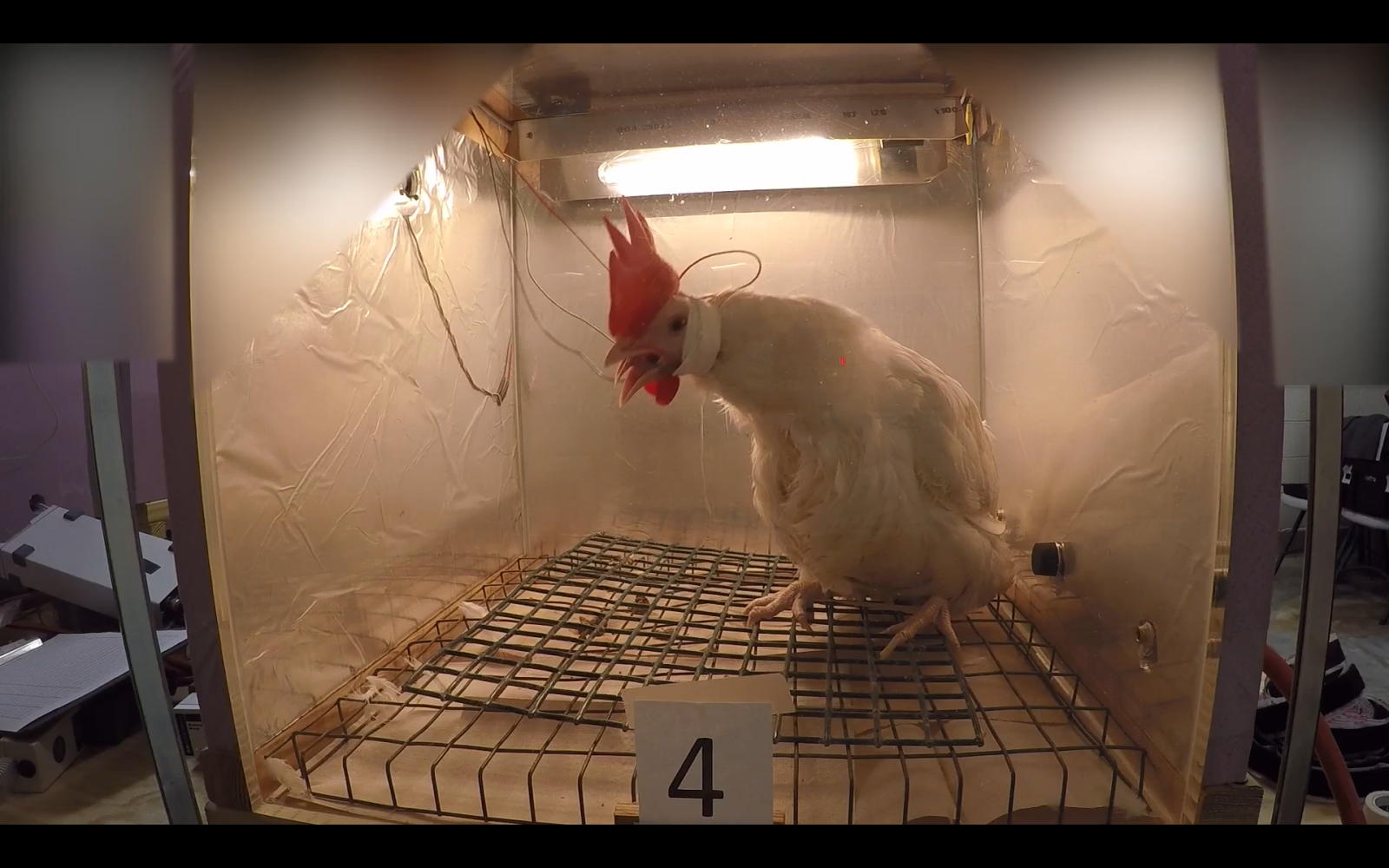 Animal Outlook recently received public records, including research protocols, photographs, and approximately 10 hours of video footage that show the cruel experiments conducted by the North Carolina State University (NCSU) researchers in 2016. The research, of course, received funding from the U.S. Poultry and Egg Association to study the effects of ventilation shutdown or VSD on chickens.

VSD is an extremely controversial method of killing animals raised for meat. During VSD, a barn or enclosure is sealed, and airflow is cut off to hundreds and often tens of thousands of animals who slowly suffocate and die from heat stress or suffocation. VSD+ goes about the same method, but workers will add heat or carbon dioxide to speed up the process of murdering the animals.

The North Carolina State University observed chickens in small clear boxes as they used different combinations of pumping in carbon dioxide, shutting off airflow, and increasing heat to test different kill methods of the birds. The horrifying footage shows the poor chickens throwing themselves against the sides of the boxes, gasping for air, and trying to escape before they finally collapse and die. Many were attached to electrodes to measure biological data.

Animal Outlook points out the irony that the poor chickens were subject to hours of torture and suffering while lab workers were surrounded by fans while sipping bottles of water.

“The poultry industry knew full well that slowly cooking to death and suffocating birds was cruel,” said Cheryl Leahy, Executive Director, Animal Outlook. “Yet they funded university researchers to optimize this mass-killing method so large egg facilities could cheaply kill entire flocks on a routine basis—the research helped pave the way for VSD’s approval by the AVMA.” Leahy further states, “We can now see this widespread inherent cruelty for what it really is, demand accountability under the law, and remove our support from this industry by refusing to buy animal products.”

The poultry industry trade association funded the studies, and The American Veterinary Medical Association (AVMA) even later cited the experiments and approved the cruel mass-killing method.

VSD is nothing new to the brutal meat industry and is often used to control outbreaks like avian influenza. They also have used it to kill pigs who could not be shipped to slaughterhouses after the pandemic began.

Millions of animals are murdered by the method of VSD, especially since the massive recent outbreak of avian influenza. The USDA reported that VSD was used in many avian influenza “depopulations,” and a Tyson facility in Missouri even killed more than 300,000 from this method.

VSD and VSD+ are also used on pigs. In 2020, Iowa Select Farms, the state’s largest pork producer, murdered healthy pigs who could not be sent to slaughterhouses because of the COVID lockdown. The Intercept reported that animal rights group, Direct Action Everywhere revealed the pigs screaming for hours as they were slow-cooked to death. Soon after, Iowa Select announced they would discontinue the practice, but the use of the method is far from over; it is actually on the rise and is encouraged and supported by government and veterinary organizations.

Thankfully, a resolution is pending with the AVMA to hopefully abandon VSD. Many veterinarians have spoken out in support of the resolution, and in 2020, Animal Outlook teamed up with other animal organizations to file an emergency petition with the USDA. However, nearly two years later, the USDA still has not bothered to respond and continues to deny the petition by disbursing relief funds.

Nearly 1.4 million chickens face “depopulation” by VSD in just one county in Pennsylvania alone. Yet, the dairy, poultry, and egg industries still try to remain adamant that the birds will be depopulated “humanely.” As we know, VSD is far from humane, and we thank Animal Outlook for uncovering this cruel experiment and showing the true ways that “food” is handled before it comes to our plates!

We don’t need these experiments to realize that ‘live-baking’ millions of animals are cruel. These companies are essentially slow cooking the animals to death, and it seems no one is blinking an eye. We need these companies to be held accountable under the law. The best thing you can do is to stop supporting this industry and stop buying any meat or animal products. Sign this petition that asks Congress to place a national ban on gas chambers in animal shelters, sign this petition to demand a formal investigation into the events at Iowa Select Farm, and sign this petition to tell the American Veterinary Medical Association to oppose inhumane depopulation.