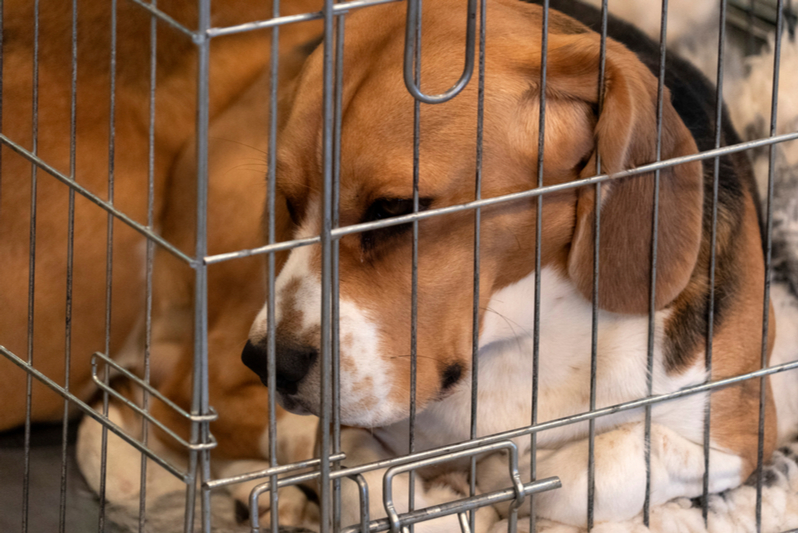 Update: On Friday, February 4, 2022, a bipartisan letter from congress was sent to the National Institute on Drug Abuse, demanding answers about this study and similar studies performed on animals.

Beagles have long been used in experiments because of their docile nature. In a new investigation by the watchdog group, White Coat Waste Project, it was discovered that the National Institute of Health spent over $2 million in tax-payer dollars to forcibly inject cocaine and other experimental drugs into these gentle and innocent creatures.

The puppies were outfitted with a jacket that would dose them with cocaine at different intervals for several months. They were then monitored by video “so experimenters could see if the puppies had any ‘adverse reactions’”, given another “experimental compound” and underwent surgery to have a device implanted, which would monitor their vitals.

After the experiment was completed, the dogs were then either killed or sent off to be used in further experiments. This experiment was done two different times, with 6 and then 7 beagle puppies, respectively—despite the FDA saying “that it doesn’t require drugs to be tested on dogs.”

The organization which contracted these cruel experiments was SRI International, which recently made headlines because Dr. Anthony Fauci’s division at the NIH paid them to poison and cut the vocal cords of 6-8-month-old puppies. The point of having their vocal cords cut was so that the researchers wouldn’t have to listen to them scream out in pain.

However, since SRI International didn’t have the proper equipment available, they outsourced the work to Charles River Laboratories, another organization with a less-than-stellar reputation that involves exploiting monkeys.

Devin Murphy, the Public Policy and Communications Manager at WCWP, issued a statement in response to these gruesome findings.

“#BeagleGate just got bigger. Taxpayers should not be forced to foot the multi-million-dollar bill for wasteful and cruel ‘Coke Hound’ experiments in which beagle puppies are injected with cocaine to fulfill just to fulfill burdensome and outdated FDA red tape. The NIH is addicted to spending and it’s time we got this waste and abuse off of the taxpayer’s back.”

The futile and inhumane nature of animal experimentation needs to end. It not only causes great harm to animals but it can also hurt humans as well.

Message your members of Congress and urge them to defund the NIH’s deadly cocaine experiments on puppies.