6 Myths the Media Perpetuates About Animals 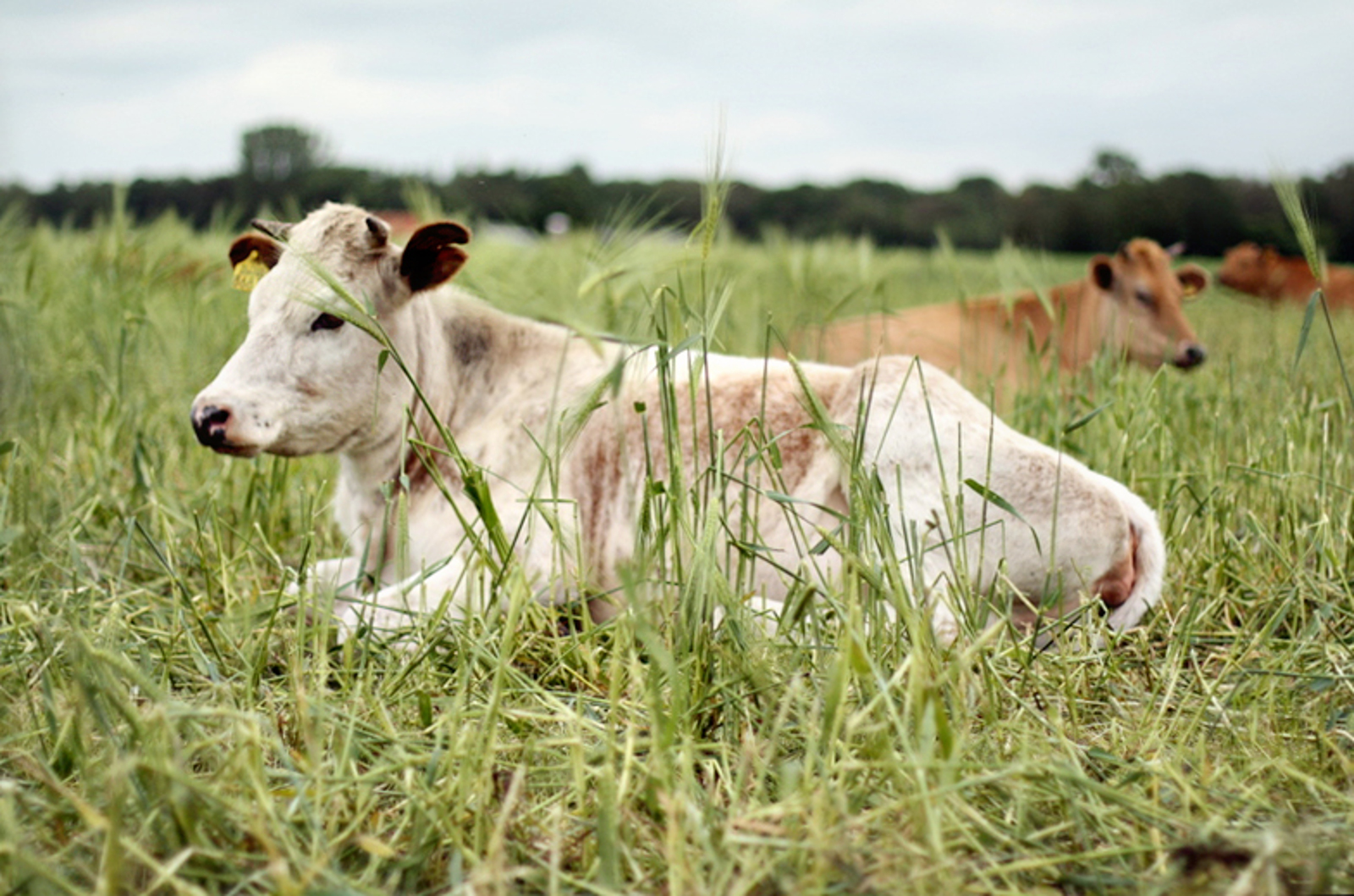 “Because we have viewed other animals through the myopic lens of our self-importance,
we have misperceived who and what they are. Because we have repeated
our ignorance, one to the other, we have mistaken it for knowledge.”

It seems that everywhere we turn the concept of using animals for our own gains is presented as normal, natural and necessary. This can make it very difficult for us to discern the truth about what animals are like, and the truth about our relationship with them.

Using animals for food, clothing, product testing, and entertainment is so normalized it is understandable that a culture steeped in animal use and abuse carries with it various myths about animals, animal products, and our relationship with both. Some of these myths arise from our simple lack of connection and experience with animals, especially farmed animals, who are often raised and processed outside of public view. We often accept myths about animals to protect ourselves from the disheartening truths about how they’re used in industry.

However, the possibility of distinguishing fact from fiction and reality from myth is increasingly available. Here are 6 myths about animals that are perpetuated today, and some of the ways they are debunked: 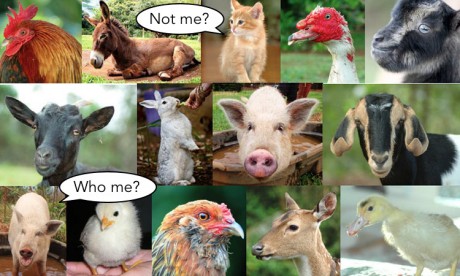 Lelani Farm Sanctuary
The grounds for eating animals under the guise of “human nature” and “biological necessity” is highly suspect. In “The Comparative Anatomy of Eating,” Milton Mills explains that human anatomy and physiology are much more akin to herbivores than omnivores or carnivores. We have small, flat mouths with small teeth, a rotating jaw, digestive enzymes in our mouths, comparatively low stomach acidity, a long digestive tract, and we lack sharp claws, fast reflexes and carnivorous instincts. We don’t salivate at the sight or smell of roadkill, our pupils don’t dilate when we see the animals we eat, nor do we make chattering noises when we look at a bunny rabbit.

These factors combined mean that human beings are more adept at eating plant foods. Nevertheless, a defining feature of being human is that we are not reducible to our biology. As moral beings capable of choosing our way of life, it is worth questioning whether we are strictly “meant” to do anything. 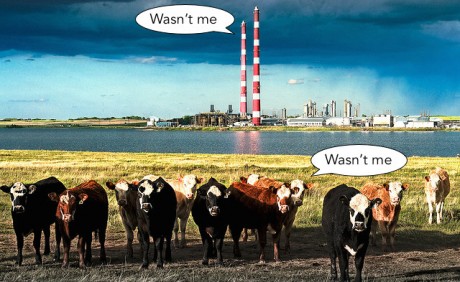 Buying locally grown food is preferable if and only if all else is equal. If a household buys only local food but regularly buys animal products, they are saving the greenhouse gas equivalent of about 1,000 miles of driving per year. However, if they eat vegan food for only 1 day a week with no regard for buying local they save the equivalent of 1,160 miles per year.

This is because only 4 percent of the greenhouse gas emissions from the U.S. food system are the result of transportation from producer or processor to consumer. The fact the United Nations Food and Agriculture Organization (FAO) estimates that livestock production is responsible for 14.5 percent of global greenhouse gas emissions, while other organizations like the Worldwatch Institute have estimated it could be as much as 51 percent, is not due to the final transportation process, it’s due to methane, respiratory emissions, and clear-cutting forest to grow animal feed and provide more grazing land. With final transportation only accounting for 4 percent of total emissions, it is more resource efficient and sustainable to eat whole, organically grown plant foods grown 3,000 miles away than it is to eat animal foods grown by your neighbor. 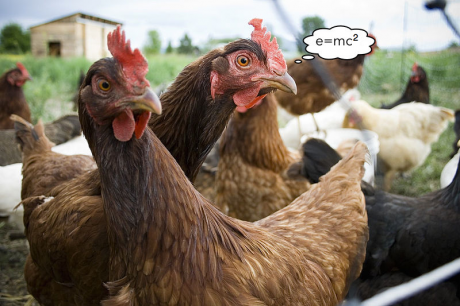 Chickens are incredibly intelligent and live complex social and emotional lives–despite the fact that, after marine animals, they are the most frequently killed animal for human consumption. They often outperform toddlers in representational and numerical abilities and can do basic arithmetic by keeping track of additions and subtractions in shuffling games. They can anticipate the future, delay gratification and exercise self-control. In one study, they chose to delay gratification for a larger food reward 90 percent of the time.

They lead intricate social lives, prefer the company of those they know to strangers, and communicate to one another with at least 30 different calls with different meanings. They display empathy, have active dream lives, can recognize more than 100 faces, and make excellent mothers.

4. Dairy Cows Will Explode if We Don’t Milk Them 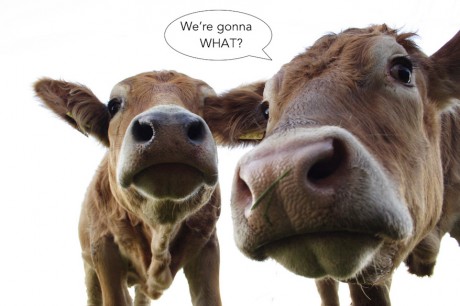 Expressions like “cows give milk” and “cows need to be milked” along with the array of dairy advertisements showing happy, willing cows are extremely deceiving. These claims overlook the basic requirement for all mammals to lactate: pregnancy and childbirth. Human consumption of dairy requires that we hijack this natural process through repeated artificial insemination and the subsequent separation of calf from mother so that we can take the milk for ourselves.

According to the USDA, 97 percent of dairy calves are permanently taken from their mothers within 24 hours of birth. This separation is so devastating that mother cows often bellow in despair for weeks. The cries are so awful that residents living near dairy operations have been known to call the police after hearing their screams. Like all mammals, if baby cows are removed from their mothers and the mothers are unable to express milk, the mothers can develop pain and infection. This does not mean that cows “need to be milked” by human beings anymore than cats, squirrels, or walruses need to be milked. It means that, like all mothers, cow mothers need to feed their young. 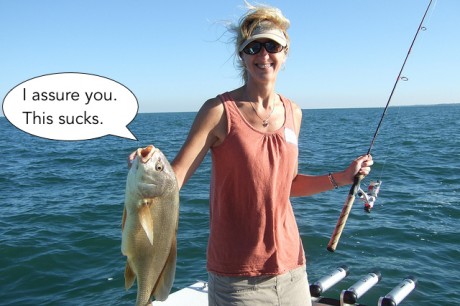 The myth that fish don’t feel pain and don’t have a nervous system is still alive and well despite the fact that research increasingly shows that their perception and cognition often matches and exceeds that of other vertebrates. This means that they can no longer be considered an ethical grey area.

According to Jonathan Balcombe’s Pleasurable Kingdom, when toxic substances are applied to the lips of trout, their heart rates increase, they take longer to resume feeding, and they display unusual behaviors following the harm. These effects are significantly reduced if treated with a painkiller. In all vertebrates, free nerve-endings register pain. Fish have an abundance of these nerve-endings and also produce pain-reducing substances like endorphins. The fact that fish experience pain also means that they have the capacity to avoid it and have sufficient memory to avoid future sources of pain. Even goldfish, with an alleged 3-second memory, can remember an obstacle course a month later.

6. Leather is a Harmless By-Product 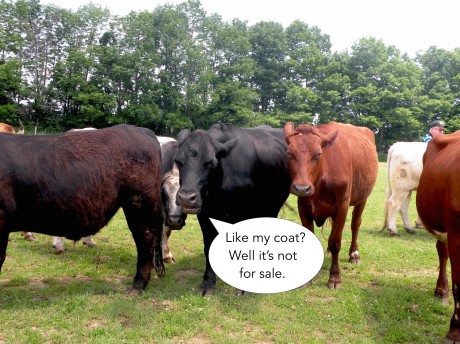 Leather is not a by-product of the slaughter industry. It is a co-product. The sale of animal skins makes up approximately half of the profits of all slaughter businesses that process cows. Factory farms could not be profitable without the sale of skins.

By the pound, leather is the most profitable part of an animal. This means that cows are killed for their skin as much as they are killed for their meat. The production of leather also causes tremendous toll on workers and the environment. To convert decomposing flesh into an enduring commodity requires the use of harmful chemicals, including formaldehyde, cyanide, lead, and chromium, which are known carcinogens. Those living close to tanneries have increased instances of leukemia. Considering animal rights and welfare, human and environmental health, there is nothing harmless about this product.