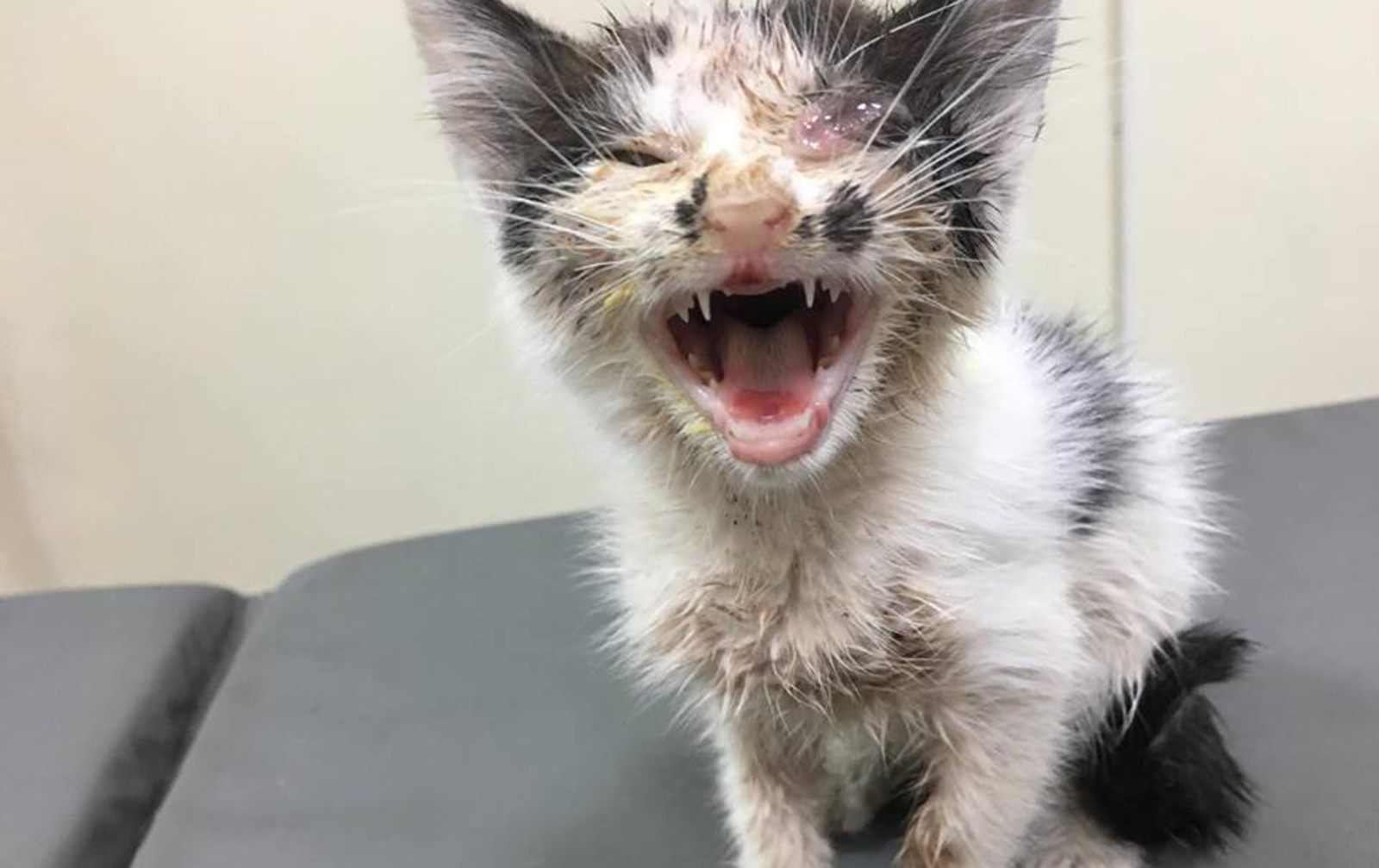 On the streets of Bulgaria in the summer, you come across a lot of sick, crying kittens who are no bigger than the palm of your hand. Some of these kittens come into this world and disappear without anyone ever knowing or caring. Others, the few lucky ones, get discovered, rescued, and sometimes, a second chance at life.

One of those kittens is Moses. After surviving a huge thunderstorm and heavy rain, this tiny abandoned kitten was rescued by The Save Me Foundation, an organization dedicated to rescuing needy animals in Bulgaria.

A week later, another tiny kitten around the same age arrived at the foundation in need of help. Both of the kittens were infected with the herpes virus and looked like they were on the brink of death. The question was, would they get through it or would they disappear out of this world without a chance? 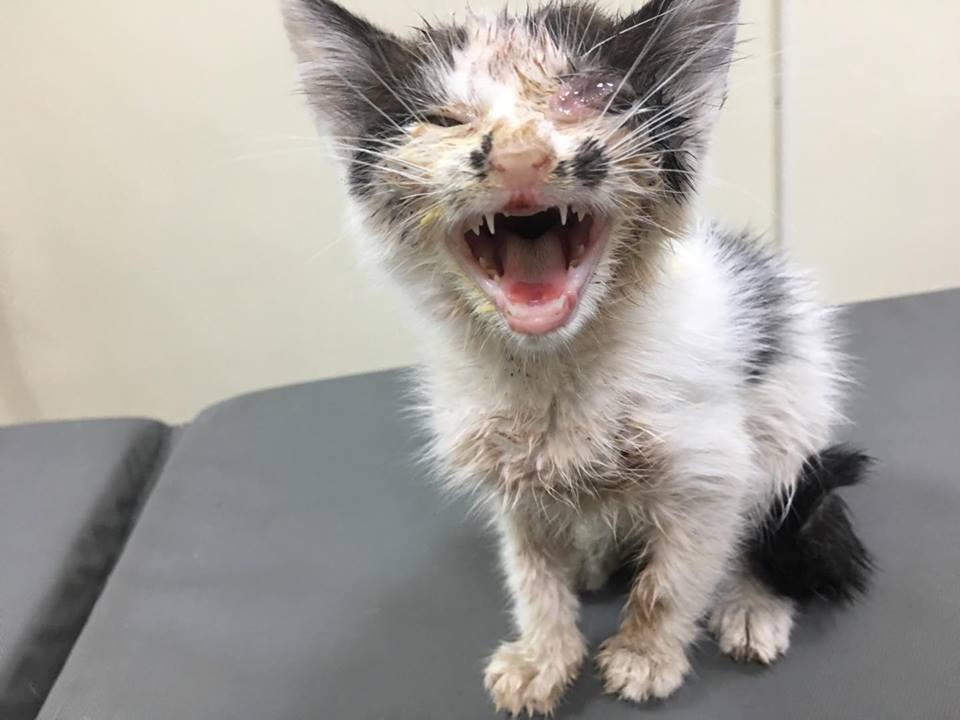 When Moses was first found, he looked incredibly sick and weak.  His eyes were so swollen and infected you could not even see one of his eyes. He also had an ulcer and part of his tongue was missing. Obviously, he was not feeling too good either because he refused to eat or drink and had terrible diarrhea.

After a veterinary examination, Moses was diagnosed with the herpes virus and was treated with an IV drip, antibiotics, and medication for his eyes. Poor Moses looked terrified. He was just a baby, after all. And no baby should have to go through all of this. 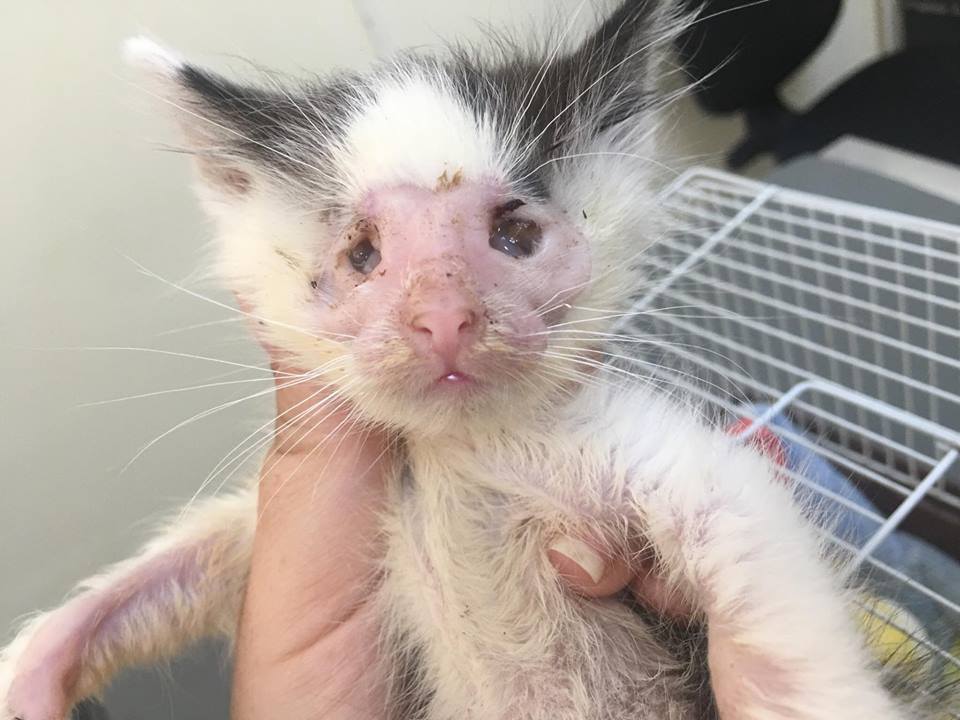 A week after Moses was found, another kitten was discovered and taken to The Save Me Foundation for help. Noah was his name, and he, like Moses, was only around two months old. The only difference was that he looked a lot worse than Moses. With his sore face and eaten up eyes, Noah’s future was very precarious.

Noah’s examination produced the same diagnosis as Moses: he had the herpes virus. 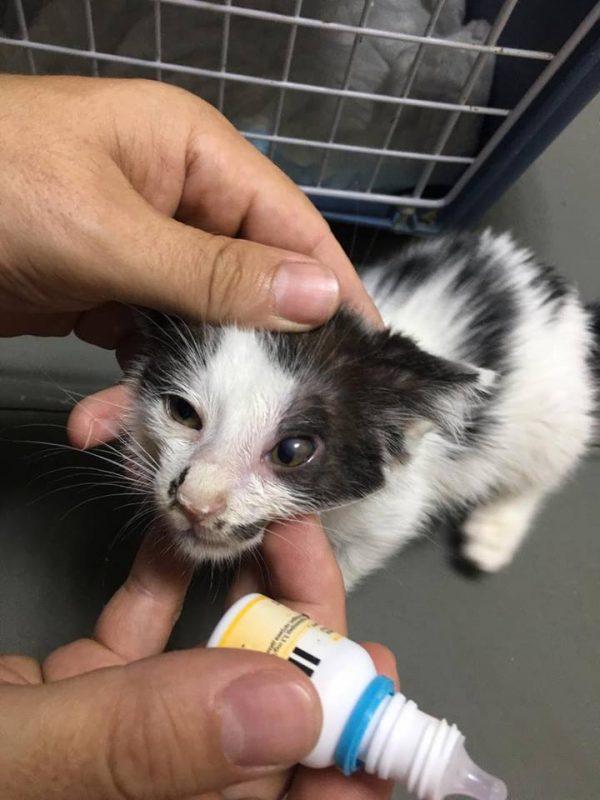 After a course of antibiotics, medication and eye drops, Moses’s eyes cleared up perfectly and he could see again with both eyes.

Unfortunately, it was too late for Noah though. He had lived with the herpes virus for far too long and it had eaten up his eyes and made him blind. According to the vets, his eyesight had gone a few days before he was found. 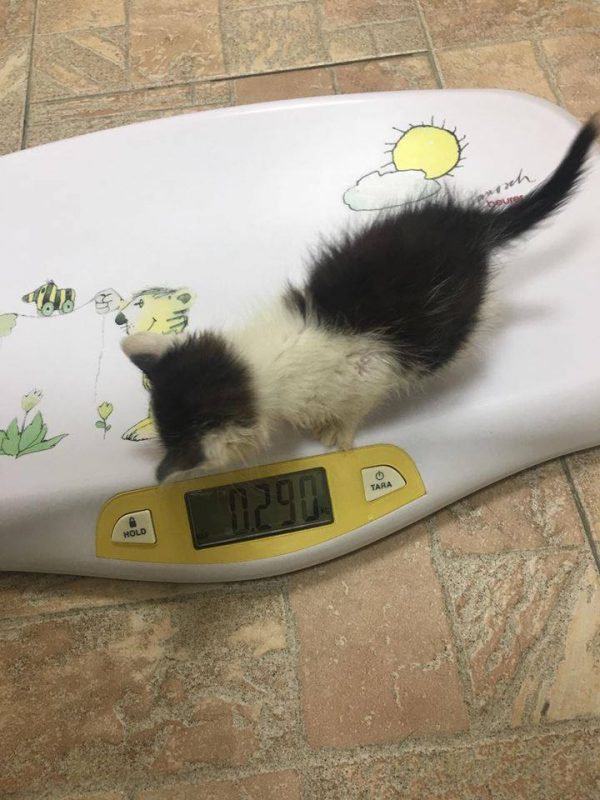 If only Noah had been found earlier, he would still be able to see the world around him out of both eyes, but sometimes life throws sticks at you and you have to deal with it. And dealing with it is exactly what Noah is doing – and he’s doing it just wonderfully.

Despite everything he is going through, Noah has an amazing spirit and zest for life. He may not have his sight but that doesn’t mean he doesn’t feel anything. Desislava Stoyanova, the founder of The Save Me Foundation who has been taking care of both kittens, says, “The moment I get near him and then touch him, he is a true kitten, enjoying belly rubs and all the attention!” 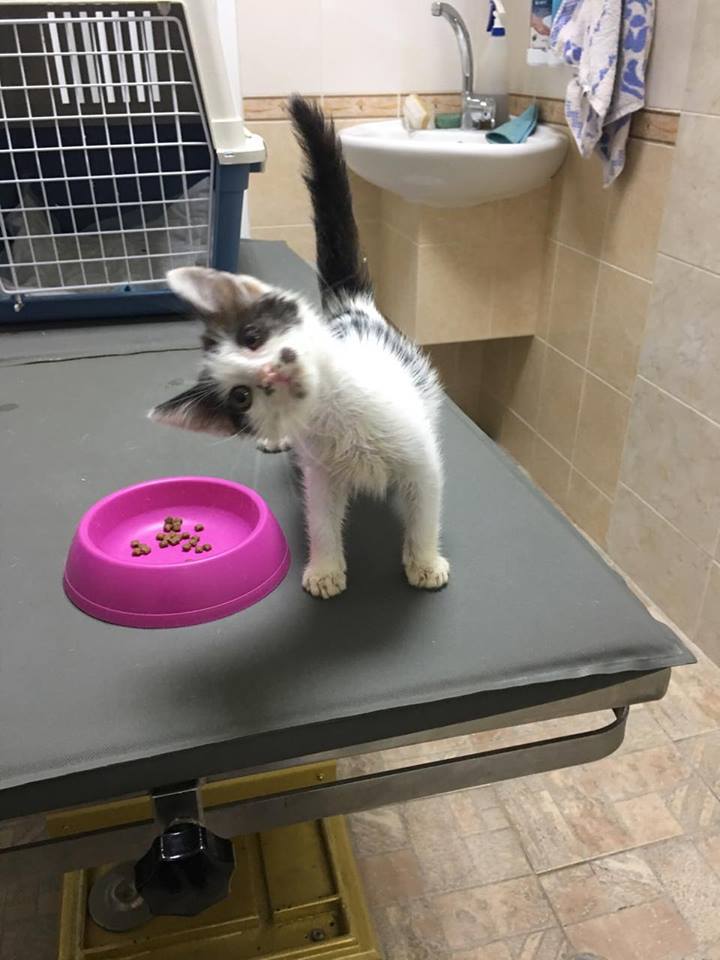 Moses is also doing well and is eating better now. His symptoms of the herpes virus are almost cleared now thanks to his ongoing medication. Like Noah, he still needs a lot of medical attention and he still has a long way to go until he is completely healed, but at the moment, he is doing well and that is what matters most.

Will You Help These Kittens?

Moses and Noah still have a long way to go until they are completely healthy. They still require medical care and attention, and that means their medical bills are getting higher and higher all the time.

The Save Me Foundation desperately needs your help in order to continue helping homeless, needy animals in Bulgaria. Will you send a donation to help them pay for Moses and Noah’s medical bills? Even just one dollar can make a huge difference.

Image source: The Save Me Foundation