WTH?! Kids Are Being Taught How to Make a Positive Impact By Raising Animals for Slaughter? 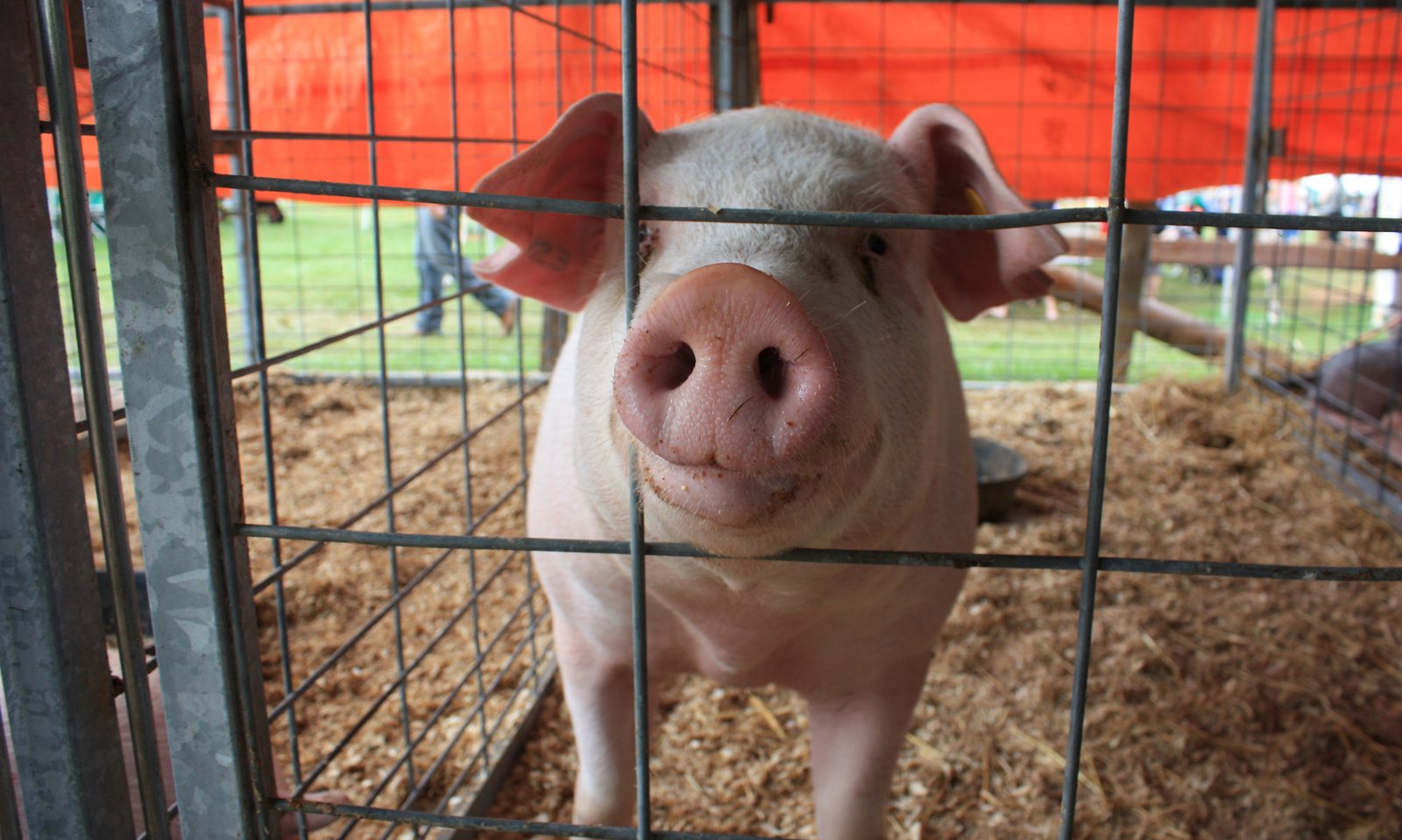 Children love animals, and parents love opportunities to teach compassion and responsibility. This is precisely what Future Farmers of America (FFA) and 4-H claim to promote. Only here’s the catch: FFA’s “supervised agricultural experience” and 4-H’s “youth livestock program” end with children selling their new friends at price per pound.

FFA and 4-H offer several agricultural-related programs like working in a flower shop, operating a pet sitting business, researching different brands of plant food, growing a vegetable garden, or raising a show lamb… Each is designed with the goal of “preparing young people to make a positive impact in their communities and in the world.”

But where raising a live animal for meat is concerned, we can’t help but wonder if this is really necessary to achieve the above.

Animal-rearing programs typically go something like this: youth, aged nine to 18, purchase one or more animals, care for the animal(s) for up to one year, and then sell the animal(s) at auctions at county fairs. This is all made possible by special Youth Loan Programs established by banks. In short, kids go into debt in order to acquire baby animals, and then break even or turn a profit when they sell the grown animal(s) a year later.

Making money to “pay for college” is a part of the redemption narrative involved in raising “project” animals. Attendees at county fairs buy animals far above market value to support the program and reward the kids. 4-H’ers often make up to $2,000 for a steer who would otherwise sell for less than half the price at market.

But financial support for these programs goes well beyond county fairs and individuals who purchase animals. FFA and 4-H are private-public partnerships of universities, federal and local government agencies, foundations and professional associations, and private sponsors. Incidentally, the major players in private sponsorship are big agribusinesses like Monsanto, Cargill, ConAgra Foods, John Deere, and Coca-Cola.

In addition to financial debt, youth participating in these programs are subject to emotional burdens. In 2010, researchers at the University of Colorado conducted a study on the emotional work required of those in the 4-H youth livestock program – the focus: coping with emotional and moral conflict about the treatment of animals.

Participants often identify as “animal lovers” and are drawn to the program precisely because they like animals, but kids who raise livestock must quickly learn how to cope with what is called the “caring-killing paradox.” The program literature recommends things like, “Begin touching your steer as soon as possible” and “[it is] important to spend time with the pig in its pen every day … Touch the pig as often as possible. This can include brushing, scratching, rubbing, etc…”

Because of the intense contradiction between learning to care and bond with an animal while knowing that the goal of this care is to sell the animal for slaughter, researchers found three coping strategies were commonly employed: cognitive emotion work, how to disregard feelings and not get attached; distancing, how to view the animals as merely “market animals”; redemption, how to justify the process through saving money for the future and buying next year’s animals.

Participants must engage in “active emotion work,” which in this case means that they have to redefine their feelings for the animals and try not to get attached through methods like not naming the animals and avoiding sentimentalizing who they’ve learned are just “market animals.”

“I used to name them, but when you grow up, you quit naming them.”– Older boy raising steers 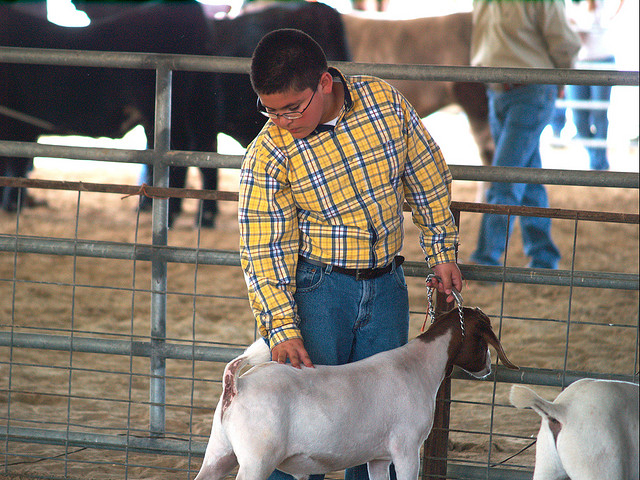 After a short time in the program, 4-H’ers learn to view the animals as distinct from other companion animals in their lives and instead as destined for slaughter, or “created” for the market. Researchers concluded that the term “market animal” manipulates empathy so that participants can manage contradictory emotions.

The College Fund and Next Year’s Animals

The narrative in agricultural families and communities concerning animals raised for food is that loss and replacement are natural and normal. The loss of animal lives is not to be experienced in the same manner as pets or other animals, and if one questions this or withdraws participation, one risks becoming alienated from friends and family. Empathy for animals is swiftly superseded by concerns for community and tradition. Custom trumps harm, and raising future animals softens the emotional blow of losing particular individuals while pride in putting money earned toward a college fund makes the personal and animal suffering appear worthwhile.

“I was sad, but happy to get money for next year’s animals.” – Boy raising hogs for several years.

The good news is that there are alternatives to the caring-killing projects offered by FFA and 4-H. One can simply avoid FFA and 4-H projects that involve farmed animals and instead participate in another agricultural-related project within either organization. Alternatively, one can offer to volunteer at an animal rescue or sanctuary that is committed exclusively to helping animals.

And not to worry, if one has gone so far as to already purchase an animal, it is never too late to have a change of heart! Most sanctuaries will strongly consider taking in an FFA or 4-H animal. Animal Place initiated a program called 5-H – the fifth ‘H’ standing for humane – in which the sanctuary either takes in the animal directly, depending on space, or assists in placing the animal at another sanctuary or permanent home. The program requires that children agree not to participate in future animal projects and agree to an interview for media purposes. A life is saved, and children are encouraged to embrace their feelings of compassion.

One lucky individual who was saved prior to slaughter is Panda, who now resides at Animal Place. Panda is a real survivor! Born in the summer of 2013, he was bought and raised by a teenager as part of an FFA project. Panda was housed in a schoolyard when someone broke in and intentionally nearly burned him to death at just five months old. He survived, but “when Panda’s person, who was raising him for slaughter, found Panda covered in burns he wanted to save his life, but ironically he wanted to save his life just so that he could sell him at the county fair at a terminal auction for price per pound.” A generous donor intervened and purchased Panda so that he could live out his life in sanctuary, safe from being viewed as a thing, respected as an individual. 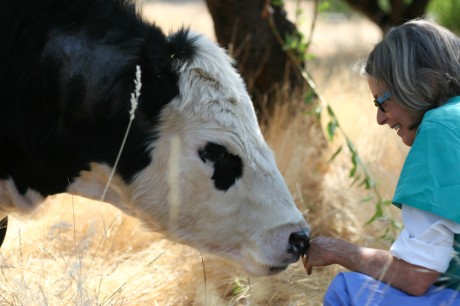 With so many humane ways to teach responsibility and compassion, there’s no need for children to endure the emotional hardship involved in raising animals for slaughter, or for animals to have their trust so brutally betrayed and their lives ended so suddenly.

When an FFA or 4-H participant decides to opt out of selling their new friend, or out of animal-rearing projects altogether, they’re not only saving or sparing a life, but they’re acting as ambassadors for compassionate kids everywhere.