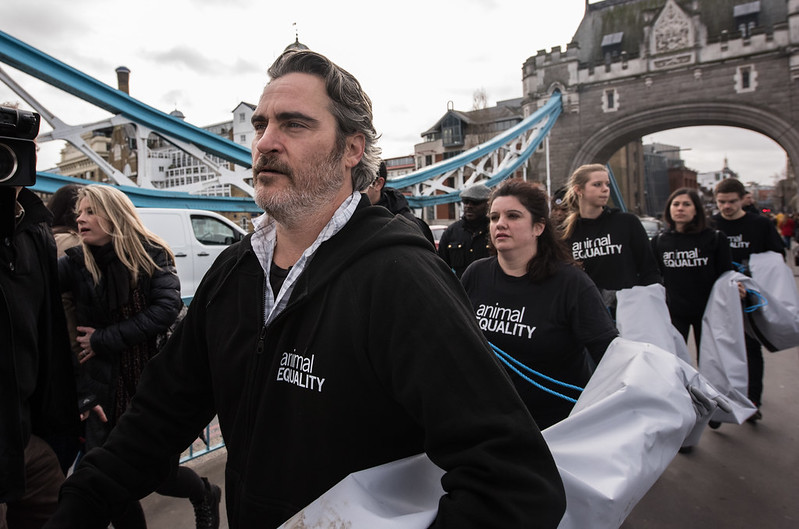 According to an emailed press release from Animal Equality UK, actor Joaquin Phoenix joined an animal protest before his appearance at the Bafta Awards in London. He was joined by other members of Animal Equality on the Tower Bridge to protest factory farming.

Phoenix, a vegan and an animal activist, was urging others to go vegan and stop using animal products. Phoenix said in a statement, “I think we have a personal responsibility to take action right now and one way that we can mitigate climate change is by adjusting our consumption and by going plant-based. And so I feel sometimes like it’s not being talked about enough. So, I’m just encouraging people to learn more about eating plant-based and to make a difference to make whatever personal impact they can on the climate emergency.”

He continued, “When you witness the horror that really happens behind closed doors and slaughterhouses to farm animals all over the world, it’s impossible not to be affected by it and to realize that we have to do something drastic to stop it. So I’m just doing my part and trying to amplify the voice of these activists that out every day, doing something, taking action, and the least I can do is take some time off today and come here to talk about this issue.”

Watch a video of the protest below:

President of Animal Equality Sharon Núñez, joined others at the protest. She said in an emailed statement, “Joaquin’s dedication to animals and the environmental cause is extraordinary, he sees the absolute need for us to have serious conversations around the devastation that factory farming is having on animals, our planet, and our health. Factory farming is a major contributor to water and air pollution as well as deforestation. At the same time, animal agriculture accounts for 14.5% of greenhouse emissions according to The Food and Agriculture Organization of the UN. A vegan diet is one of the best ways to reduce our impact on the planet – by changing what we eat, we can change the course of our future.”

Joaquin Phoenix recently joined an animal protest after the SAG Awards in Los Angeles. He also spoke about climate change in his Golden Globes speech and in a statement to the press after the awards show. Phoenix was arrested alongside Jane Fonda at a Firedrill Friday Protest in Washington to stand up against climate change.

Read more about factory farming in One Green Planet check out these articles: