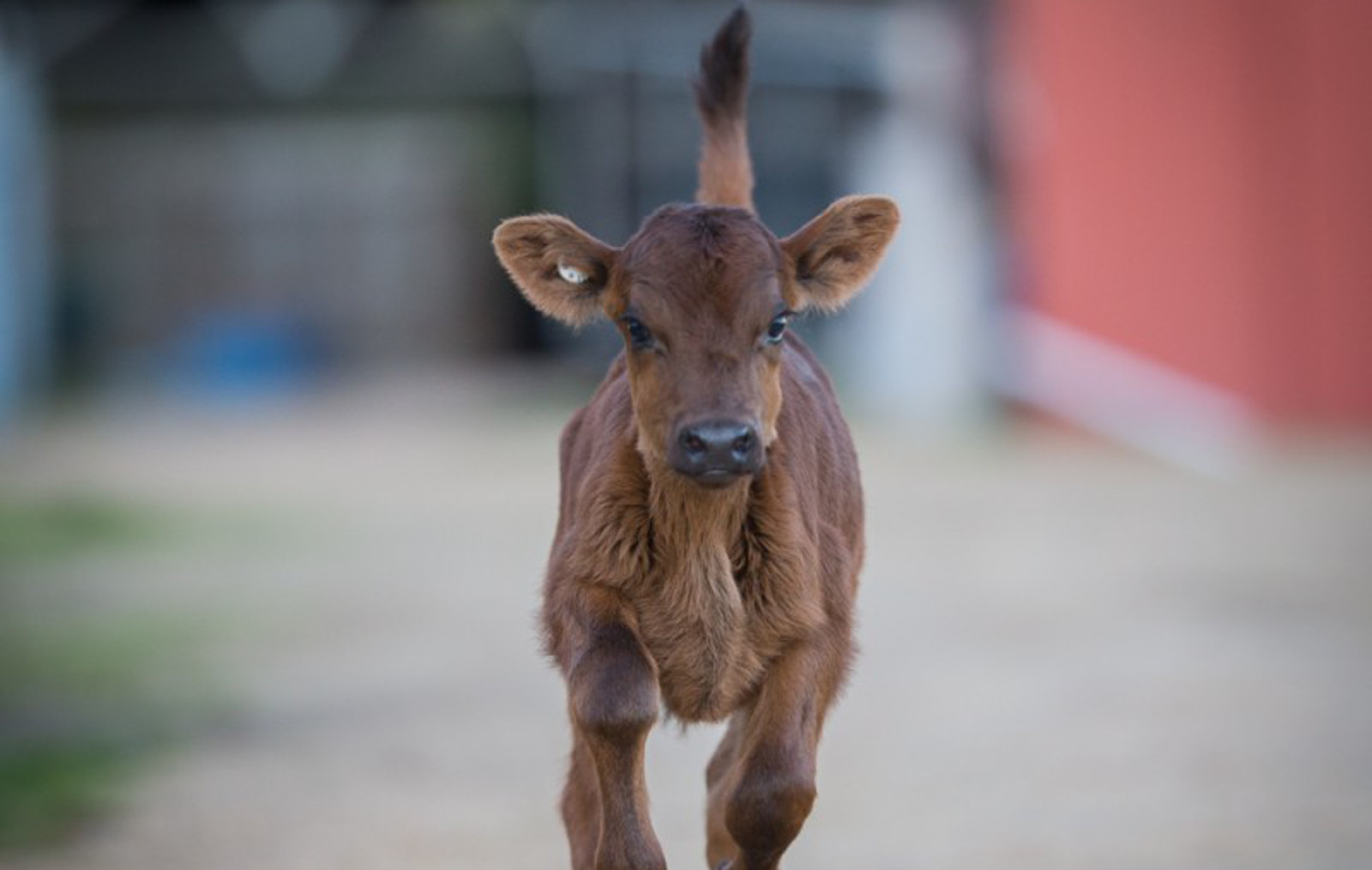 In order for dairy cows to produce milk, they have to be impregnated and give birth to a calf, for whom this milk is intended. However, because milk is considered a commodity meant for human consumption, babies born into the dairy industry are separated from their mothers mere moments after birth.

While the suffering of mother cows is heartbreaking, the experience for calves is no better. Only a small portion of female calves are raised to become dairy cows like their mothers, those that can’t be used by the dairy farmer are sold to become veal or raised as a beef cow. Male calves are considered “waste” to the dairy industry and are typically all sold for veal or beef.

Considered little more than a “means to an end,” dairy calves are fated to short lives filled with misery. Jasmine was one such a calf, however, this lucky calf was rescued from this cruel life thanks to many kind and compassionate people who took it upon themselves to give her a better life. 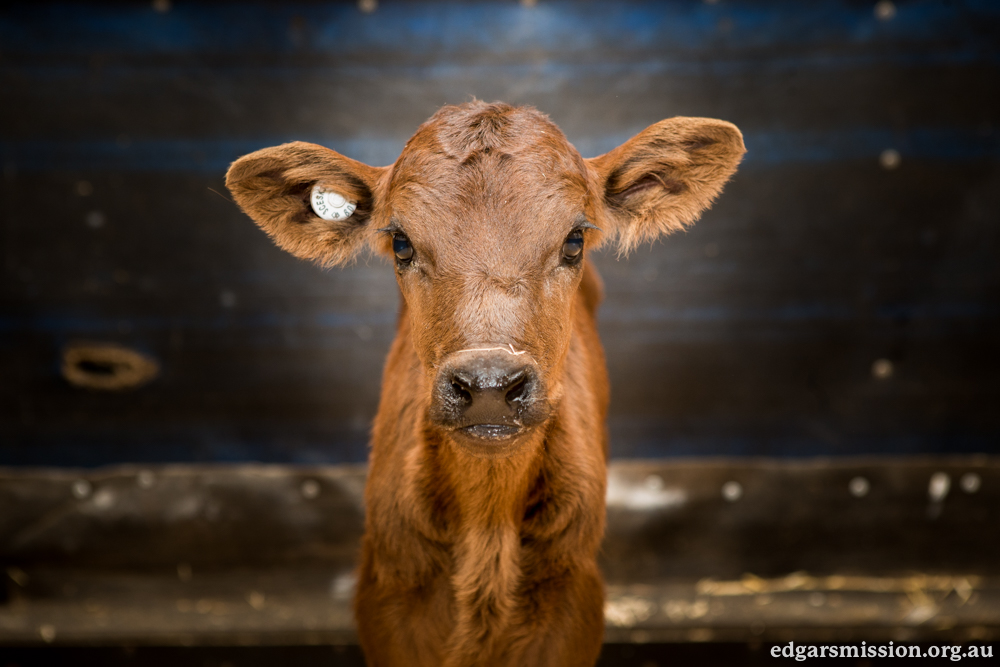 Like many other calves in the dairy industry, Jasmine was considered worthless to the dairy farmer who owned her. In an effort to make some sort of profit off of this young creature, the farmer opted to sell her to a couple who expressed interest in her.

However, this kind-hearted but inexperienced family was completely unprepared to care for the physical and mental ailments that Jasmine had sustained after being separated from her mother in such an untimely manner. The stress of being forcibly removed from her mother’s side caused Jasmine to experience shock and her immune system became that much more vulnerable to infection and illness.

The small calf’s health deteriorated quickly and her caretakers were overwhelmed with endless veterinarian bills, but no matter how much medicine or special feed she was given, Jasmine’s health continued to diminish. What Jasmine really needed was an experienced and caring hand to take over the role that her mother left off – in addition to her medication.

After a series of failed attempts to make Jasmine thrive, her caretakers called Edgar’s Mission Farm Animal Sanctuary in Lancefield, Victoria for help. Luckily, this skilled team of compassionate professionals was more than willing to take on the little calf and her transfer was immediately arranged.

Poor, sickly Jasmine only had a few hours of life left in her when she arrived at Edgar’s Mission, lethargic with a bad case of bloody diarrhea. The good souls at the sanctuary knew they had to act fast if they were going to take advantage of the small chance they still had to save her. 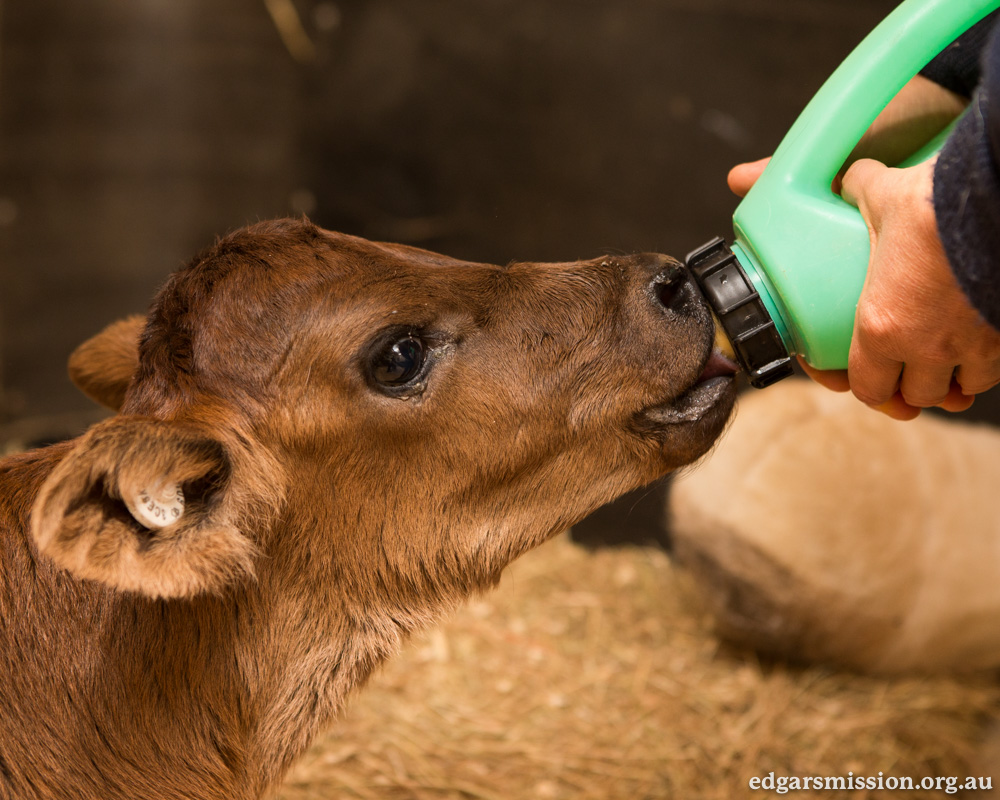 Fortunately, despite all that she had been through, Jasmine still had a strong will to live and after much medical care and treatment, Jasmine is on the road to recovery.

She now spends her days romping through the fields of the sanctuary, playing with some of her lamb friends at Edgar’s and has even made friends with the resident kitty cat! Her sweet and gentle nature has made her lots of friends in her new home, both human and animal, and she especially enjoys her large white teddy bear that she keeps in her stall with her. 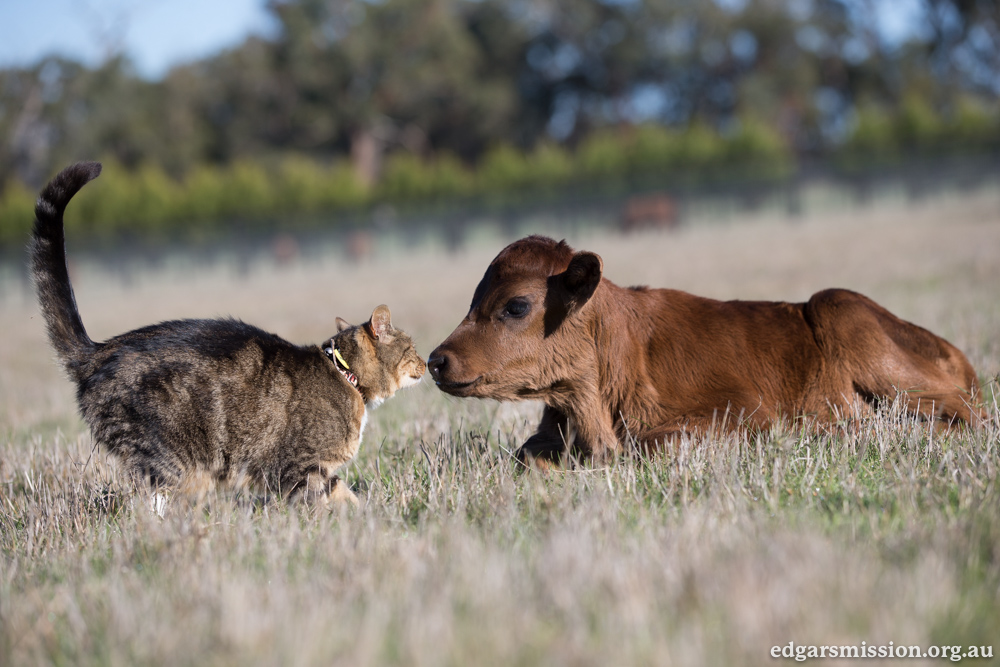 With lots of care from her human companions and her new animal friends at the sanctuary, Jasmine is doing as well as can be expected and the Edgar’s team believes she’ll pull through and grow up to be a happy, healthy cow. 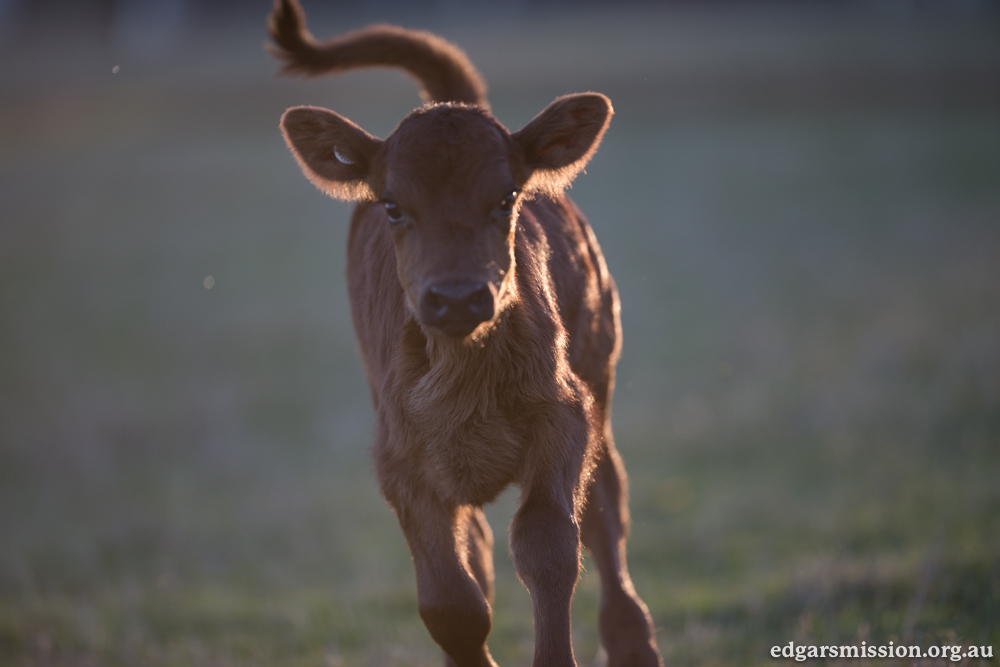 The cruelty that Jasmine experienced during her life before rescue is far too common of a story for calves in the dairy industry. This little cow is an exception to the rule in that she was pulled out of this deplorable existence thanks to Edgar’s Mission Farm Sanctuary. We all have a duty to recognize how our consumption habits impact others around us. In the case of dairy, it is up to us to dispel the myth that cows don’t suffer in the production of milk. We all have a choice to support suffering or remove ourselves from this vicious cycle and choose a truly cruelty-free alternative. With a plethora of plant-based dairy substitutes on the market, choosing a kinder option has never been easier – or more delicious!

Please don’t support this kind of horrible existence being forced on so many gentle cows like Jasmine — support farm animal sanctuaries who rescue farmed animals from the horrors of dairy and meat. To donate to Edgar’s Mission to help their animals, including Jasmine, please click here.