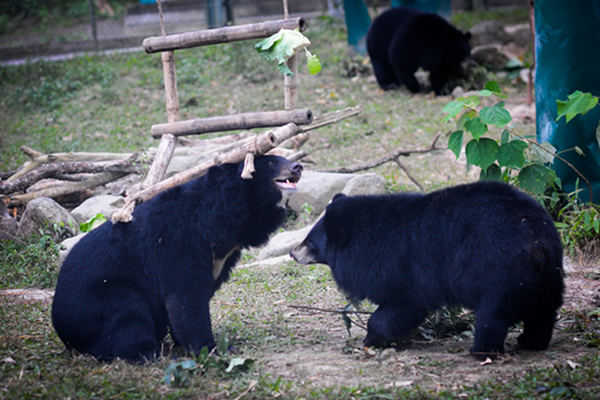 In parts of Asia, moon bears are kept in small cages for up to 30 years, and have their bile extracted through catheters, needles and open wounds. Starved, dehydrated and riddled with ailments, this is a living hell for the bears. The bile is used as a form of medicine.

Animals Asia is devoted to ending the barbaric practice of bear bile farming, which sees more than 14,000 bears kept in cages on farms in China and Vietnam. Animals Asia also has programs to help cats and dogs in Asia, and improve the welfare of animals living in zoos and safari parks. 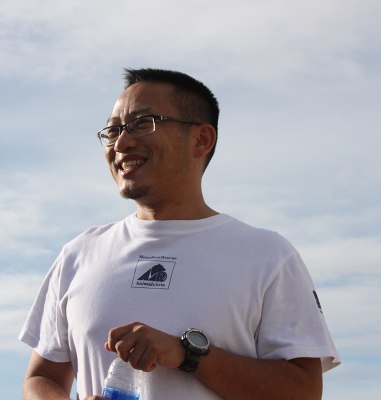 Born and raised in Sichuan, China, Ray Zhu is one member of the Animals Asia staff that works tirelessly to help the animals. Formerly contributing to the organization’s efforts from China, Zhu is now based in the US. In addition to having led the Animals Asia public relations and education effort in China, Ray recently contributed crucial evidence to the passage of a law in Hawaii to ban the use and possession of bile and gallbladders. He is currently situated in Animals Asia’s US office, in San Francisco, CA where he is US End Bear Farming Campaign Coordinator. Along with his incredible drive, ability, and devotion to the cause, Ray brings great warmth and an infectious sense of humor.

Having launched the first English language magazine in Southwest China in 2000, Ray was invited to witness Animals Asia’s rescue of 39 bears in November 2003. “That was the first time I saw those terribly wounded farmed bears and got to know the shocking fact of bear farming.” Says Ray, “I was really amazed and appreciated those people coming from far away to my country to help our bears. I was thinking at that time it was a great project with great people and I’d like to be part of it in future if possible.”

Since joining Animals Asia’s staff in 2004, Ray has been deeply involved with increasing awareness and support of animal welfare issues with a special focus on bear farming, and cat and dog abuse in China. As part of the organization’s team he has been engaged with media relations development, media events planning, and various education programs. In China, he was involved with local traditional Chinese medicine market investigations, cat and dog market investigations, and zoo checks. At the San Francisco office, Ray is currently working with individuals and groups in the US to raise awareness among Chinese Americans.

While in China, Ray participated in the 2010 Shandong bear rescue, which saw Animals Asia free ten bears from their incarceration at a bear bile farm. The bears were brought on a 1,500 mile journey to the organization’s expansive China Bear Rescue Center in Chengdu. There they received extraordinary care and were granted the peaceful life that they had been denied for so many years. Being a part of this mission has been just one of the highlights of Ray’s time with the international animal welfare nonprofit. During the journey from the bear bile farm in Shandong to the sanctuary in Chengdu, while stuck in a miles-long traffic jam, one of the rescued bears showed signs of distress and required immediate surgery or he might die. Says Ray, “We desperately asked the traffic police for help. What happened next surprised everyone. The traffic police contacted the closest hospital and then directed our truck through the jammed traffic and lead us all the way to the hospital with their siren on.”

Upon arrival at the hospital, “We found we could not get through their gate and the surgery had to be done on the truck outside of the hospital. Quickly, the doctors managed to bring us the most needed oxygen tanks and surgery light. During the following three hour surgery, a bunch of traffic policemen built a wall to keep crowded bystanders at a safe distance; the hospital provided us a complete set of vital blood test results and anything necessary for the surgery.” Says Ray.

Before coming to California, Ray received his Nonprofit MBA from Chaminade University of Honolulu, in Hawaii. While there, he played a crucial role in the passage of a recent law to ban the sale, use, and possession of bear bile and gallbladders in Hawaii.

In June, 2012 the governor of Hawaii signed into law HB 2296. Although it had previously been a felony under the federal Lacey Act to trade in bile or gallbladders from Asiatic black bears anywhere in the US, the same did not hold true for domestic bears. As part of the investigations that led to the passage of the law, Ray went undercover to traditional Chinese medicine stores in Honolulu’s Chinatown where he found one such establishment selling bear gallbladders. In his testimony to the Hawaii State Judiciary Committee, Ray presented these findings together with his understanding of bear bile’s negative impact on bears both in Asia and America.

Following his work in Hawaii, Ray moved to California to continue his journey with Animals Asia from the US office, in San Francisco. “Through all these years,” says Ray, “I’ve seen a dramatic increase of supporters with wider range of expertise and deeper involvement. These supporters include influential academic researchers, lawyers and celebrities of all kinds. In recent years, some self-organized journalists even managed to expose the cruelty of the industry through their documentary after years long undercover investigations to a number of bear bile farms across China. All of these were truly amazing changes.”

“While Animals Asia is getting massive support in China, I hope I can help get more Chinese Americans involved in our campaigns of ending bear farming. I hope my effort can lead to some fundamental change to our work in China.”