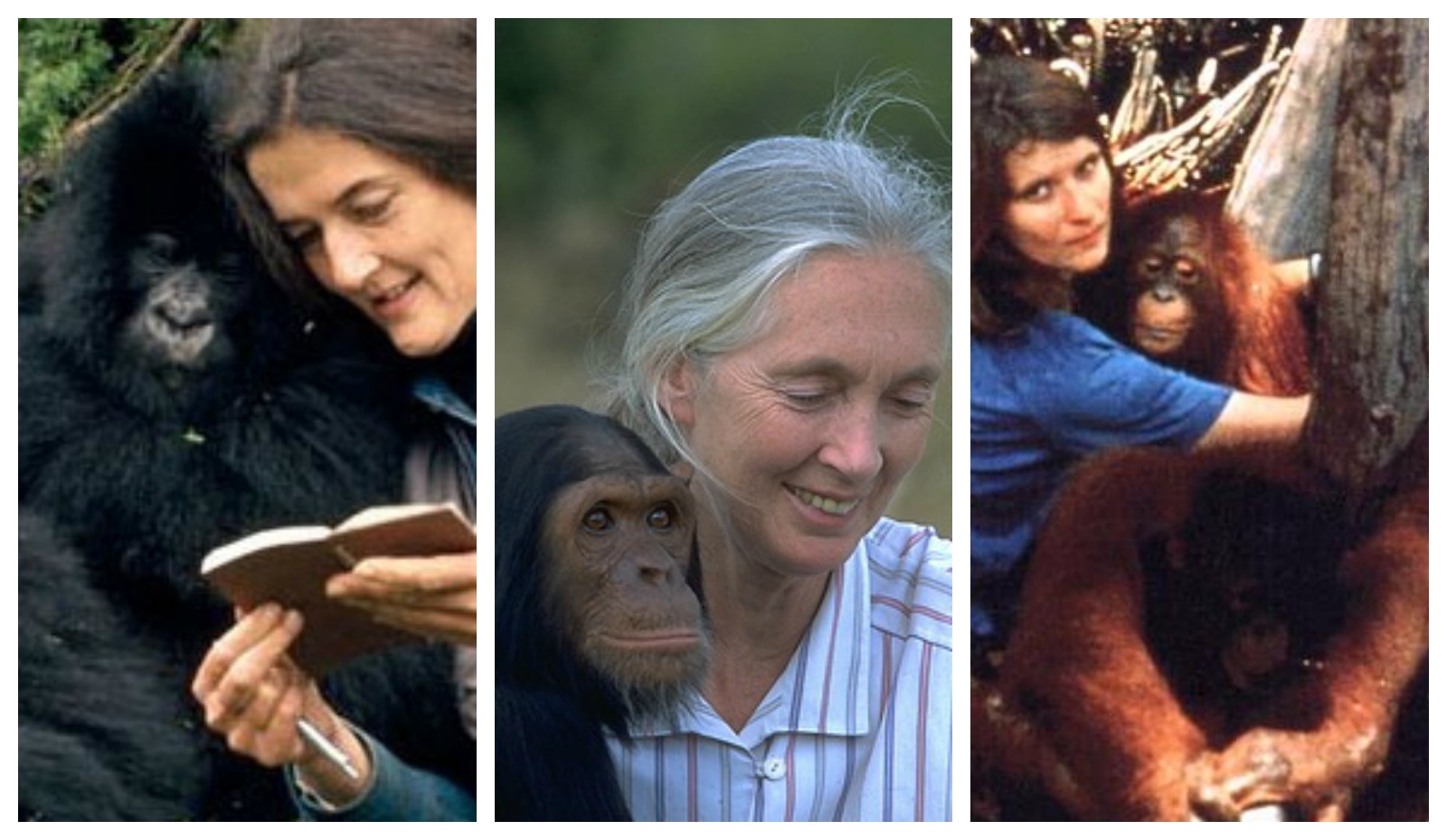 Until the 1970s, little was known about primates. We didn’t know, for instance, that chimpanzees and gorillas use tools to perform tasks like catching food in the wild or that orangutans have a strong maternal instinct. Not to mention, we had no clue how similar primates are to us humans. If it weren’t for the renowned anthropologist Louis Leakey and his belief that understanding primate behavior was vital to understanding the origins of humans, maybe we still wouldn’t today.

Convinced that humans had evolved from the apes, Leakey wanted primates to be studied in the wild – something that had never been done before. According to records from the Leakey Foundation, he was responsible for initiating Jane Goodall’s long-term field study of chimpanzees in the wild, and he helped obtain and coordinate funding for similar projects such as Dian Fossey’s work with mountain gorillas in Rwanda, and Birute Galdikas-Brindamour’s work with orangutans in the Sarawak region of Indonesia.

None of these three women had much scientific experience or knowledge and that is precisely what Leakey wanted: minds uncluttered and unbiased by science. Interestingly, some of the most groundbreaking discoveries in science would be made by this trio; Leakey’s Angels, as they came to be known. 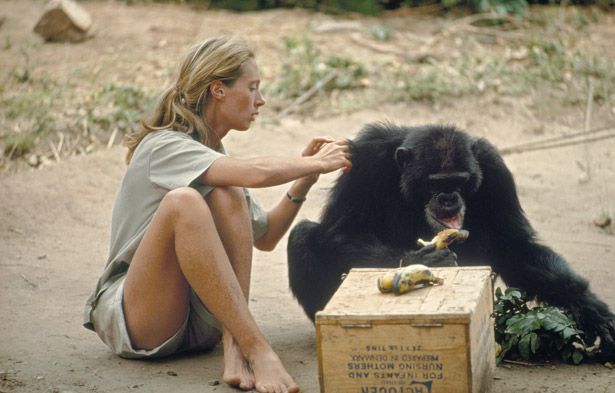 Jane Goodall first began studying chimpanzees in Gombe Stream National Park, Tanzania in 1960. She came with no degrees, no experience, just patience, and passion. Every morning, she’d hike through the forests, with binoculars on hand, waiting to catch a glimpse of a chimpanzee in the wild. And, instead of numbering the chimpanzees she saw, she chose to unconventionally, give them names. David Greybeard was the first chimpanzee to accept her, the pale stranger in the forest, and this paved the way to a great deal of phenomenal research.

Among her incredible discoveries was that chimpanzees could make and use tools to perform basic tasks in the wild, like catching termites with stalks of grass or twigs from trees. She also learned that contrary to popular belief, chimpanzees were not vegetarians. Another interesting discovery was that chimpanzees possess great emotional depth, much like human beings and are capable of kindness, playfulness, grief, aggression and tenderness. They also share many of the same actions as humans, like hugging, kissing and tickling. These initial discoveries have shaped our modern understanding of chimpanzees and continue to evolve.

Although we are most familiar with chimpanzees, this species is listed as endangered due to the bushmeat and exotic pet trades. With a population teetering around 100,000, we stand to lose this species forever if action to combat these trades is not taken. 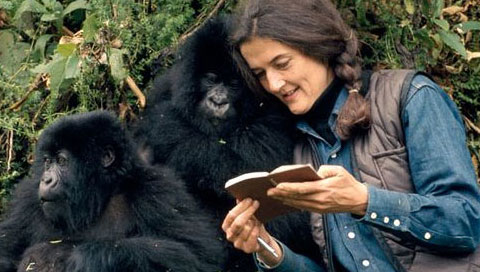 In 1967, Dian Fossey entered the Virunga Mountains of Rwanda to set up camp and prepare for the study of mountain gorillas.  Until this time, gorillas were generally considered an aggressive species, but Fossey soon debunked that myth, observing that while they are tough, they’re also incredibly gentle. Generally, they’re peaceful animals and only show bouts of anger when protecting their young.

Just like Goodall with chimpanzees, Dian Fossey saw gorillas as dignified animals with individual personalities, which is why she too named each gorilla with whom she was acquainted rather than merely numbering them. For nearly 20 years, Fossey lived among the mountain gorillas and soon grew attached to a male gorilla called Digit, who was later tragically decapitated by poachers.

In keeping with her research, Fossey found gorillas to possess a wide range of emotions and could construct tools.  Instead of simply sitting there and observing, Fossey started imitating their feeding and grooming habits and vocalization in order to gain their trust and “fit in.”It was this deep empathy for gorillas that made her so effective as an ethologist.

Today, the mountain gorilla population is in grave danger of extinction due to poaching in Virunga National Park. With a population of only 880, a quart of which live in Virunga, this species is quickly running out of time. 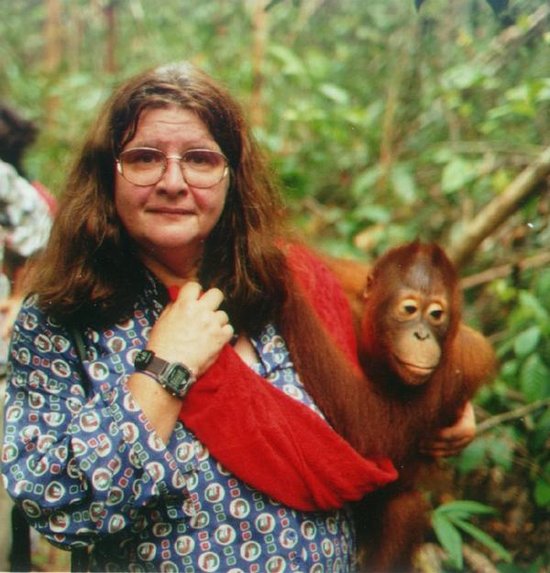 The third member of Leakey’s angels is Birute Galdikas and unlike the others, she was the one who approached Louis Leakey, proposing a research project into the lives of orangutans. Her studies began in 1971 in the jungles of Borneo.

Before Galdikas’s work, people thought orangutans were solitary creatures, but her research proved otherwise. In fact, the social and familial relationships of these primates closely mirror those of human beings. Orangutans maintain incredibly close relationships with their mothers for the first ten years of their life, they literally cling on to their mothers until they’ve reached at least seven. Like humans, orangutan mothers devote a lot of time and energy into raising their young. According to Galdikas’s research of their migration patterns, some populations will remain in their original home area while others will be more nomadic and venture off to other areas.

Another fascinating discovery made by Galdikas was that orangutans have the longest birth interval of all mammals. A female will reproduce at around 15 or 16 years old but will not have another baby until at least another eight years. The reason for this is because a young orangutan will remain with its mother for a long period of time, in order to learn how to survive in the rain forest. Wisely, they focus on one orangutan at a time to ensure they know how to find and prepare food. While this knowledge is amazing, it sadly also accounts for why the orangutan population is in such dire straits in modern times. Unfortunately, deforestation of the orangutan’s natural habitat has left this magnificent species without a home or means to find food.

These three trailblazing women have – thanks to their years of research – helped us learn a huge deal about primates and begin to understand how similar we are to these species. From our close family bonds to our complex emotions, there is much we have in common with primates, and there is much, much more we have yet to learn about them. Sadly, all three of the primate species studied by these women are currently in danger of extinction, largely due to habitat loss and poaching. It is up to all of us to pick up where Leakey’s Angels left off and continue to raise awareness for these animals by educating others about our primate siblings. The good news is you don’t have to travel to a far off jungle to do this but can start by simply sharing this post. Today we have the amazing power of the internet to bring attention to the plight of species, something Leakey’s Angels could only dream of. In honor of these three women, share this post and inspire others to learn more about these primates and the various threats facing their populations. They say people protect what they love, and it all starts with one spark of knowledge.