Bees Deserve Respect! Inside the Unsustainable World of Commercial Beekeeping 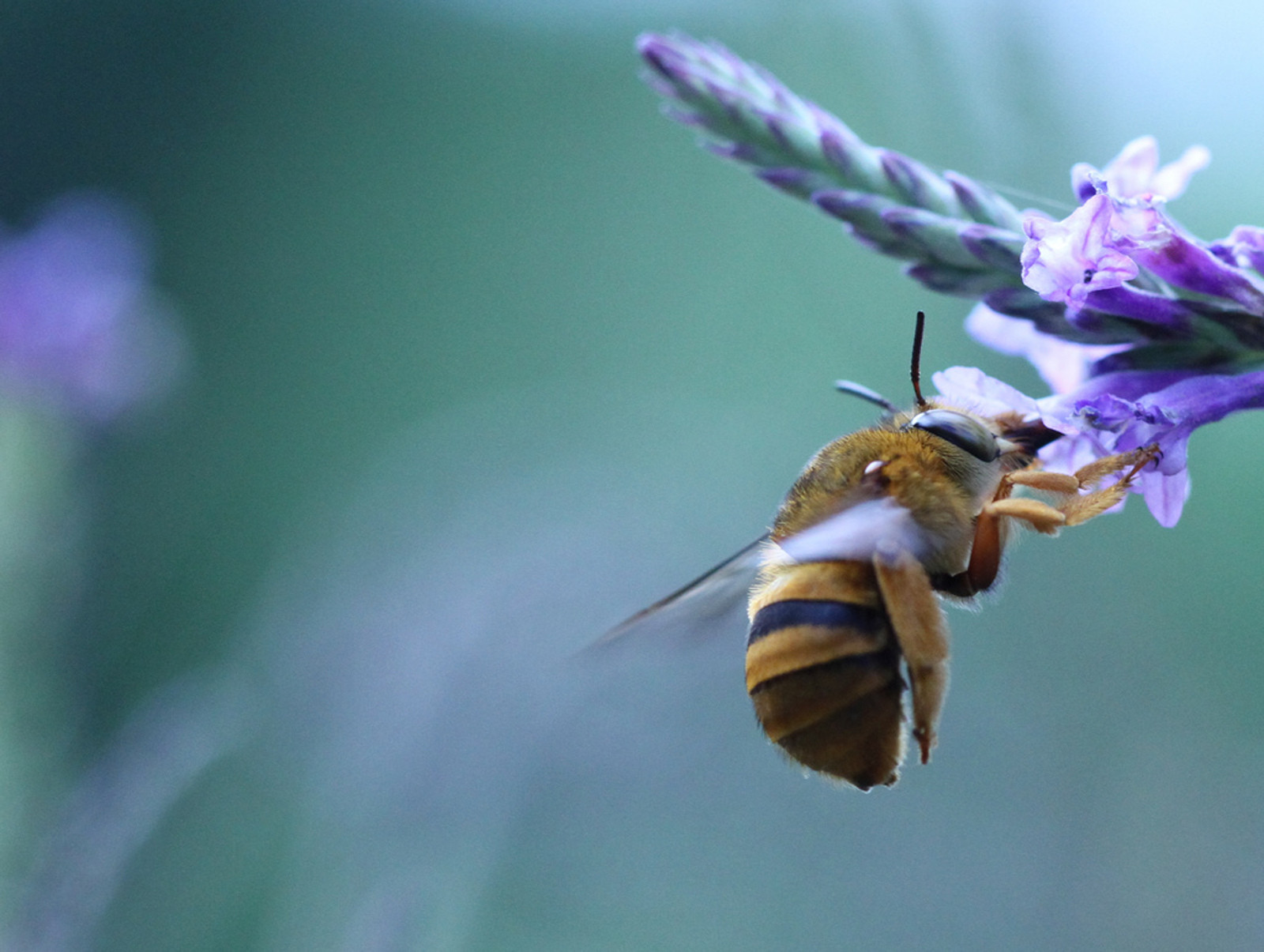 The expression, “the bees knees” used to mean “something small” or “something unnoticeable” but it later evolved into the meaning that we use today: “something exquisite” or “the ultimate.” The evolution of the phrase is fitting because while a bee’s knees are ever so small, a bee and its knees are positively “the bees knees.”

The honeybee performs the lead role in the play between plants as Mother Nature has bestowed upon it a mighty task. Flowers have no way to dance together, to pollinate one another, so they rely on nature’s cupid, the honeybee.

The fragrance of a wide-open bloom seduces the honeybee. It locates the flower, lands on a soft pad surrounded by petals; stamens rub against the honeybee as it feeds on its host’s nectar. Stamens are covered in a rich, thick and powdery substance — pollen — that adheres to the many tiny hairs on a honeybee’s body, including its knees.

The honeybee finishes its meal and flies away; it has accepted another irresistible invitation. It arrives, becomes enmeshed with the flower, rubbing its knees and body over the pistils and other stamens — pollination has taken place. It then departs, on to the next because there’s work to be done — the life of a bee is a busy one.

The queen bee is the mother of all the bees in her hive. The worker bees care for the her, feed her, clean her, defend her, care for her brood, collect nectar, make honey and build the comb. They are all her daughters and their lives are devoted to the success of the colony. The males, called “drones”, have only one task, to mate with a virgin queen; they pay for the chance with their life.

When it is time for a new queen, the colony throws out a swarm that includes the queen and her daughters and they search for new accommodations. Those that are left behind, will care for the existing brood and feed a prospective princess royal jelly, a diet that ensures the development of a future queen.

This is how colonies divide their nests, naturally. Unfortunately, like all things harvested or produced on a massive scale, there is nothing natural about commercial beekeeping practices.

Migratory beekeepers are commercial beekeepers that chase money around the country by visiting orchard after orchard during flowering seasons. They haul thousands of hives across thousands of miles, for days at a time and make a lot of money doing so.

Commercial beekeepers rob colonies of the food that they so diligently work to produce, and replace it with a substance of lesser quality — sugar water, laced with antibiotics and other additives. This hardly seems fair considering that it takes a bee, the equivalent of three trips around the world to produce one jar of honey. But the bees don’t mind, they don’t care, they’re just bees, right? Wrong.

“Dear Children, this is not how I operate.” – Mother Nature

Shipping bees all over the country for commercial purposes is unsustainable in terms of what beekeepers are experiencing around the country. Disease is being spread among colonies, their diets are (in many cases) deemed insufficient and they are being exposed to a whole range of pesticides that are thought to affect them negatively in both the short and long-term.

One-third of our nation’s bees have disappeared every winter since 2006. At first irresponsible beekeeping practices were thought to be the cause, but as it turns out there are many factors involved in the disappearance and massive die offs of honeybees, including the former.

Mother Nature is informing us of our mistakes. Commercial beekeepers and farmers are up in arms over these massive losses — in revenue. This is a multi-billion dollar industry that is at stake, people’s livelihoods are being ruined and the future of our food supply is unstable. “The idea that nature can be stripped apart and mechanized is this dangerous violent notion that is not working for us…it’s not all about us. This is not the human being show. This is not the human being planet.” Says Heidi Briguglio a partner at Azure B, LLC. Briguglio and her husband Stefano are beekeepers that offer a perspective on bees that differs from commercial beekeepers — respect the bees.

At this time, there doesn’t appear to be one single reason for colony collapse disorder (CCD). The consensus today for many scientists, beekeepers and researchers, appears to be that there are several factors at play. Though recent studies show that pesticides are the main culprit.

Many blame monocultures and believe that they are an unsustainable means of food production. Take the Brazil nut for example. The Brazil nut tree has never been successfully industrialized. The reason why is because the bees that pollinate the trees need a variety of flowers to drink from, or visit, in order to pollinate. Without the rich variety of flowers provided by the rain forests, the bees cannot survive and thus the trees do not produce the nuts.

Another reason for blaming monocultures is that in a monoculture, only a specific set of crops are grown. When a specific set of crops are grown, it becomes an all you can eat buffet for pests. These pests believe that they have found the jackpot of all food resources. This is a nightmare for farmers whose livelihoods depend on the production of an uneaten crop. The farmers turn to pesticides to control these problems. Subsequently, commercial bees come into contact with these chemicals and sometimes are they inadvertently sprayed.

It has been long thought that agricultural chemicals, or pesticides, have been behind the mass die off of bees. Several states around the country are taking action. According to Politico.com’s morning agriculture round up, Alaska, Hawaii, Maine, Minnesota, New Jersey and others are either passing bills that would prohibit the use of neonicotinoids, enforcing restrictions on their use, conducting inquiries into the status of bee populations or placing moratoriums on the use of neonicotinoids to further research their effects.

New research suggests that pesticides may  be the main cause of CCD. A popular pesticide, Clothianidin has been found to weaken honeybees’ immune systems, thus making them more susceptible to viruses and bacteria.

Blood-sucking Varroa mites are parasitic mites that cause the virus varroatosis. These mites attach themselves, externally, to honeybees and feed on their bodily fluids. Infestations of varroa mites can kill entire colonies and scientists are looking into links between the infestations and CCD.

Once the mite makes its way into the hive, the female mite lays eggs in the brood; the mites are with the honeybees throughout their entire life cycle. They can cause Deformed Wing Virus (DWV), which is thought to impair cognitive function in bees, and of course deform their wings.

Tobacco Ringspot Virus (TRSV) is a virus common to plants; honeybees have been known to transfer the virus from one plant to another. In a study published this year, researches have found that the virus has jumped to a new type of host — the honeybee.

Researchers also found the virus throughout the honeybees’ entire body; furthermore, they found the virus in varroa mites. They believe that the mites contract the disease from the bees and consequently assist in spreading the virus.

From Russia With Love

Russian honeybees are thought to be the new wave of bee in the world of beekeeping; they are thought to be resistant to varroa mites, tracheal mites and cold weather. They resist the mites by being diligent groomers and because of this, they are able to physically brush the mites away. The Russian bees are winter hardy and able to survive because they have been proven to use their honey more efficiently.

Some are also looking to breeding programs that use Africanized honeybees or AHB’s (a feral bee that has gain popularity for its defensive nature). The reason for this is similar to the reason why others are looking to the Russian honeybee. AHB’s seem to be hardier than the European honeybee (EHB), but breeding a new species of bee cannot solve the all of the problems, especially when we are to blame.

Honeybees are a keystone species, meaning that they have a large effect on our ecosystem; without them our food system would collapse. Bees are an important pollinator for crops around the world. Not only do they pollinate the plants that we rely on for food, but they also pollinate plants that birds, and other animals depend on.

In China, there are parts of the landscape that have been so overworked by chemical pesticides, that bees don’t exist. The result: migrant workers must travel around the country to hand pollinate flowers. It’s an astonishing revelation — we must change our habits.

So where do environmentally conscious folks come in? According to Briguglio the best thing that any one can do “is find out about the practices of their beekeeper and recognize that the most compassionate honey is not going to be coming from the grocery store — any grocery store. [Consuming honey] is probably going to require a relationship [with the beekeeper] on their part.”

She also states that beekeepers “are trying to make the case for symbiosis and accepting that there’s responsibility on both sides. There needs to be respect for the life [of the bee]. Our agricultural system has gone far away from that, and that’s why it’s totally toxic. We can change!”

Briguglio is right. We can change! There are many different ways to help bees. You can create a safe haven for bees by becoming a beekeeper, or you can keep a bee garden, buy organic produce, visit farmer’s markets and of course, you can cease the purchase of honey. It’s the least that we, the consumer, can do for the honeybee in its hour of need. For more information visit VanishingBees.com — watch the documentary and get involved!