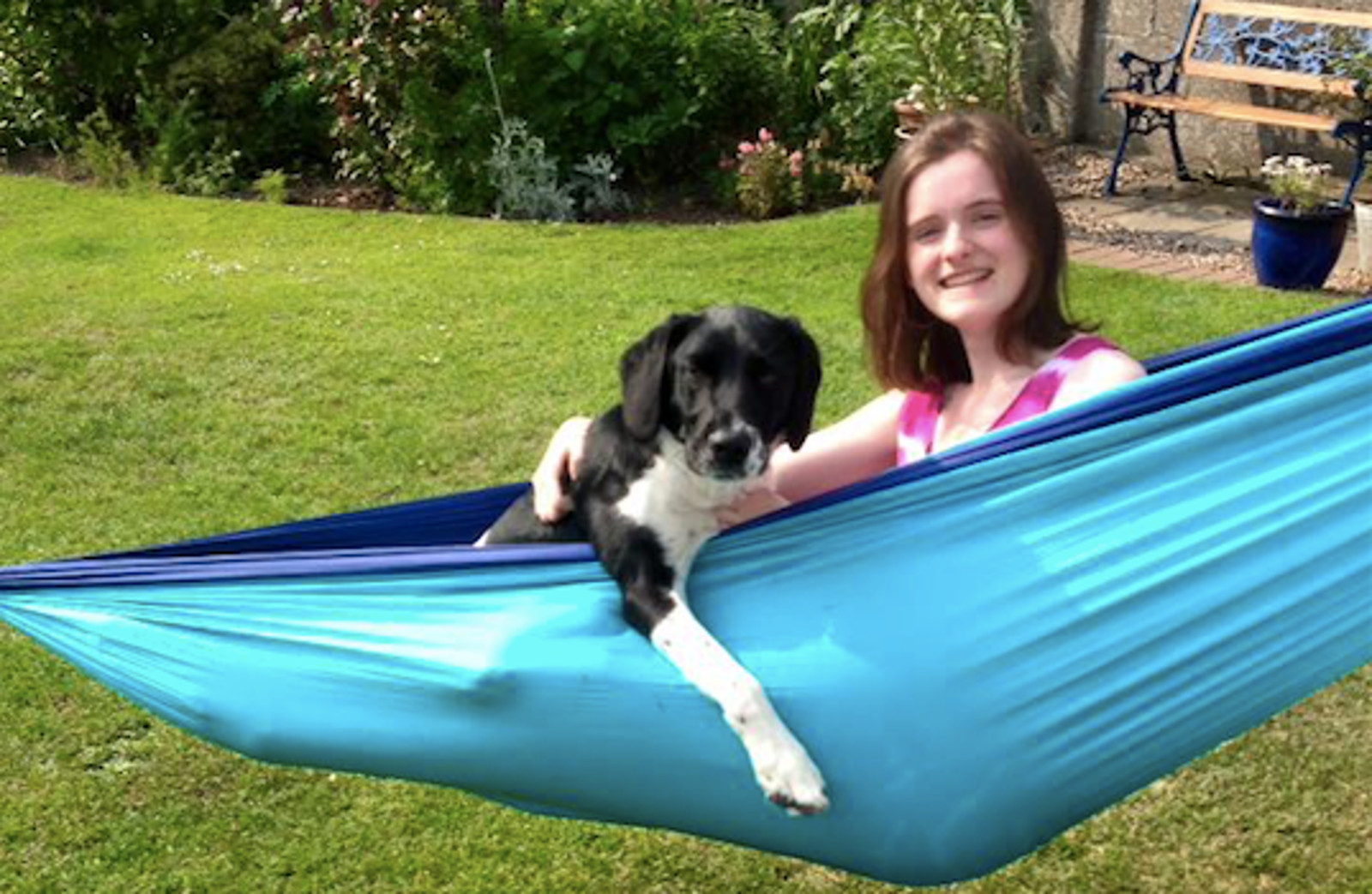 Anyone who has ever loved a furry companion will know just how much love, laughter, and enjoyment they can bring into our lives. Dogs, in particular, are renowned for their goofy and often hilarious behavior … especially when they hear that it’s dinner or walk time! They are also well-known for their loyalty and protectiveness toward the humans in their lives.

Sadly, far too many of these beautiful creatures will never experience the joys of being in a loving home. Despite many humans’ great love for cats and dogs, pet homelessness continues to be an enormous problem around the world. There are an estimated 70 million homeless cats and dogs living in the U.S. alone, and only six to eight million of these animals enter the U.S. shelter system each year. Most animals are sent to shelters after being surrendered by their families or picked up on the street by animal control authorities. Once they are within the shelter system, their chances of being rehomed are slim. Elderly, ill, or disabled dogs, Pit Bulls, and black dogs find it especially difficult to secure the forever home they so richly deserve.

While these animals languish in shelters, a lucrative nationwide industry has been built around the breeding and selling of purebred puppies. Puppy mills are large commercial breeding facilities that can hold up to a thousand dogs at a time – usually in highly stressful and unhygienic conditions. Breeding dogs in these mills are typically kept in small wire cages that leave them with very little space to move or turn around.

An estimated 2,000 to 3,000 commercial dog breeding facilities are currently licensed by the U.S. Department of Agriculture, but an unknown amount of unlicensed, illegal puppy mills are currently in operation too. If you are thinking of welcoming a new furry companion into your life, the best thing you could possibly do is adopt a shelter animal – a decision which could potentially save their life – rather than giving your money to the commercial puppy breeding industry.

I have first-hand experience of the beautiful friendship that can be formed when someone chooses to open their heart and their home to a rescue dog. In my case, the beautiful friend I have made goes by the name of Buddy. He is a loveable black-and-white scamp who came into my family’s life in March 2015, whose breed cannot be clearly determined. We know that his mother was a Labrador-Collie cross, and suspect that he may have inherited Cocker Spaniel genes from his father. Whatever his genetic makeup, one thing that we quickly discovered about him as soon as he entered our lives was that he possessed an incredibly energetic, excitable, and loving personality. These days, we cannot imagine life without him.

This picture of Buddy was taken days after he was welcomed into our home. Isn’t this just the cutest little face you’ve ever seen? 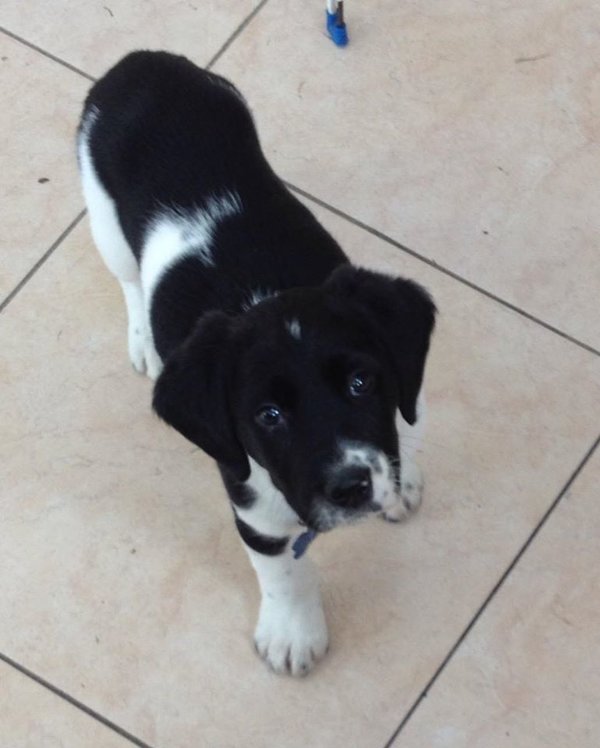 Buddy’s rambunctious, over-the-top behavior never fails to make me smile. Although I do not live with him, I visit him as often as I can, and in the process of knowing him, I have learned many important life lessons that have served me well. In no particular order, these are:

1. Some things are just meant to be.

If events had followed their intended course in the small rural Irish shelter where Buddy’s mother, Rhianna, was being held, my beloved friend would never have been born. Rhianna was due to be put to sleep – just one more casualty of the high euthanasia rate prevalent in shelters all over the world – before shelter staff realized that she was pregnant, and decided to let her live. She was handed over to the Galway Society for the Prevention of Cruelty to Animals (GSPCA), who placed her in a loving foster home where she could safely give birth to her pups. When the puppies were ready to be rehomed, my parents and my younger sister came across their photographs on Facebook, and although they were located on the opposite side of the country, they instantly knew that they just had to meet them. On the day that they first met, Buddy walked right up to my sister, laid his paw on her foot … and she instantly fell head over heels in love with him. The good news is that Rhianna and the rest of her babies were successfully rehomed too!

2. Fate works in mysterious ways that we may never understand.

Buddy was born on January 26, 2015: the very day that our first, dearly beloved dog – a beautiful Labrador-Pointer cross named Choco – passed away. We did not realize this until the rescue staff mentioned to us that Buddy would be exactly nine weeks old a few days after he first moved in with us. Nine weeks prior to that very day, Choco had finally crossed the rainbow bridge after a lengthy illness. This amazing coincidence has always been a source of great comfort to us. Could Choco have sent Buddy our way? Nobody knows … but the fact that Buddy came into this world on the very same day that Choco left it helped us to feel as though he shared a strange, inexplicable connection with our family the moment he was born.

Buddy’s first reaction to every event that causes him the slightest degree of confusion, stress, or fear is to seek our reassurance and affection. He has taught us that we should never be too proud to ask for help.

4. No time is too inconvenient for a good play session!

When Buddy decides that he wants to play with us, there is nothing for it but to surrender to the inevitable! He is one determined boy who will not stop whining and pulling his best adorable, sad-eyed face until he gets what he wants.

… and by everything, I’m talking about sticks, stones, footballs, paper, important pieces of correspondence, my sister’s homework, random pairs of socks, our shoes, his own food bowl…

Actually, this is one piece of guidance from Buddy that I have chosen not to follow.

Buddy is generally a hyperactive, curious kind of boy, but he has his more mellow times too. He has taught us that after a tough day’s work, running around and causing utter chaos wherever he goes, it’s important to chill out and enjoy some downtime. As you can tell from the photograph below, Buddy has well and truly mastered the sacred art of relaxation! 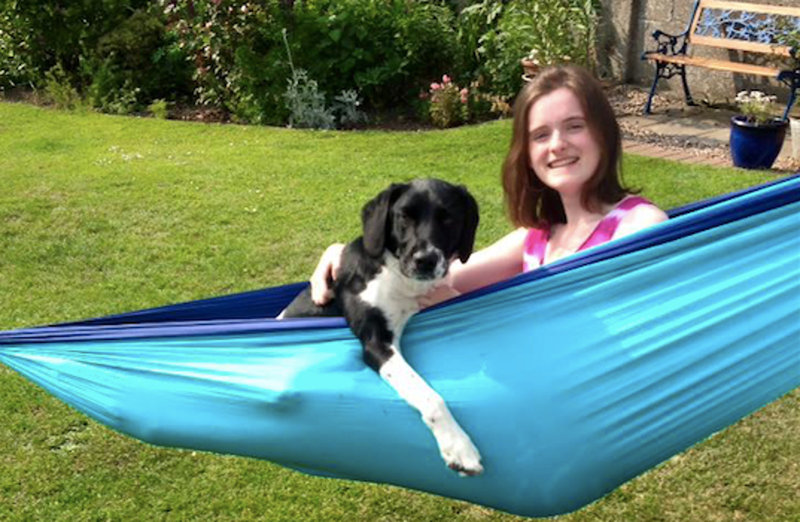 7. Never be too embarrassed to ask for your needs to be met.

When Buddy needs something from us – whether this is a cuddle, a game of tug-of-war, his next meal, or even to be left alone – he has no shame about asking for it. Too often in life, we forget that we have the right to be heard and understood, but every time I see my beloved dog, he reminds me how important it is to be open about what I need.

8. The important occasions in life deserve to be celebrated.

The photograph below reveals exactly how excited Buddy was on his first birthday in January 2016. On this momentous occasion, my mother and sister made a little “birthday cake” for him, which consisted of rice cakes and almond butter, topped with a small amount of raspberry jam! His enthusiasm on days like this is truly infectious and teaches us all that the important moments in our own lives should be celebrated to the full. 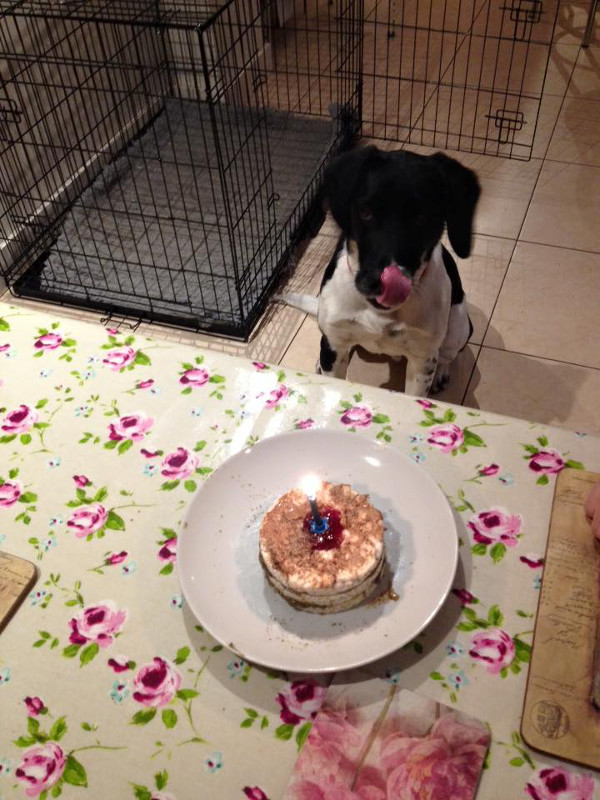 9. Work? What is this “work” you speak of? If it serves as a distraction from playtime, then it should never be done!*

According to my wise canine friend, anything that serves to prevent you from playing tug-of-war, chewing up as many human shoes as possible, eating anything that seems as though it may be remotely edible, and exploring the wonders of the outdoors should not be tolerated.

*Please note that following Buddy’s advice on this particular topic is likely to get you fired.

And last, but not least…

10. Boxes should not be used for storage purposes – they should be reserved for playtime only! 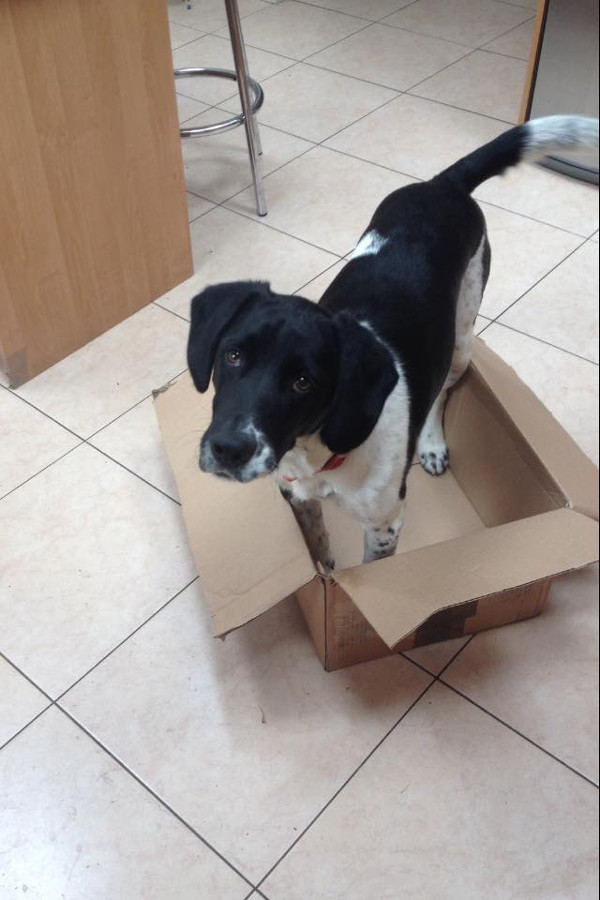 Buddy’s presence in my life has brought me nothing but joy, and it breaks my heart to think of the many dogs just like him who will never have the chance to share their love with a lucky family. To learn more about pet homelessness – and why adopting a rescue dog is the best decision you could possibly make if you are thinking of welcoming a canine companion into your home – read the articles below.