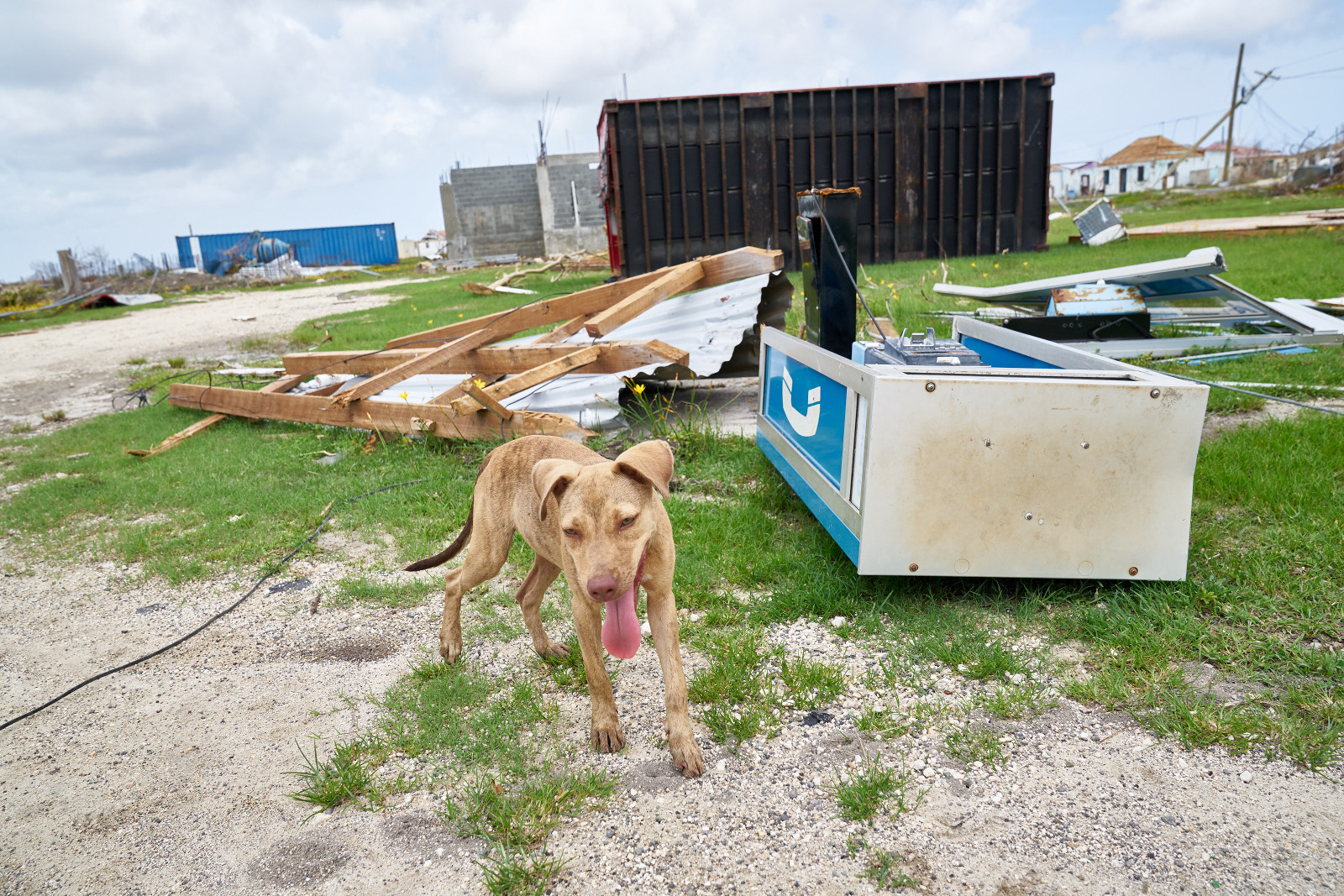 I once read a book that described what the world would be like if there suddenly were no people left. There was an early chapter that said pets trapped in houses would die quickly of starvation and dehydration. Those lucky enough to be outdoors would enter a strange and threatening new world where only the toughest dogs and outdoor adapted cats who learned hunting from their mothers would survive. Livestock would make easy prey for predators and while eventually, nature would rebalance itself, the first days, weeks, and months would be torturous for domesticated animals.

This was the scene, or something very nearly like it, when World Animal Protection’s disaster response team arrived in Barbuda earlier this month to help animals and communities in the aftermath of Hurricane Irma. 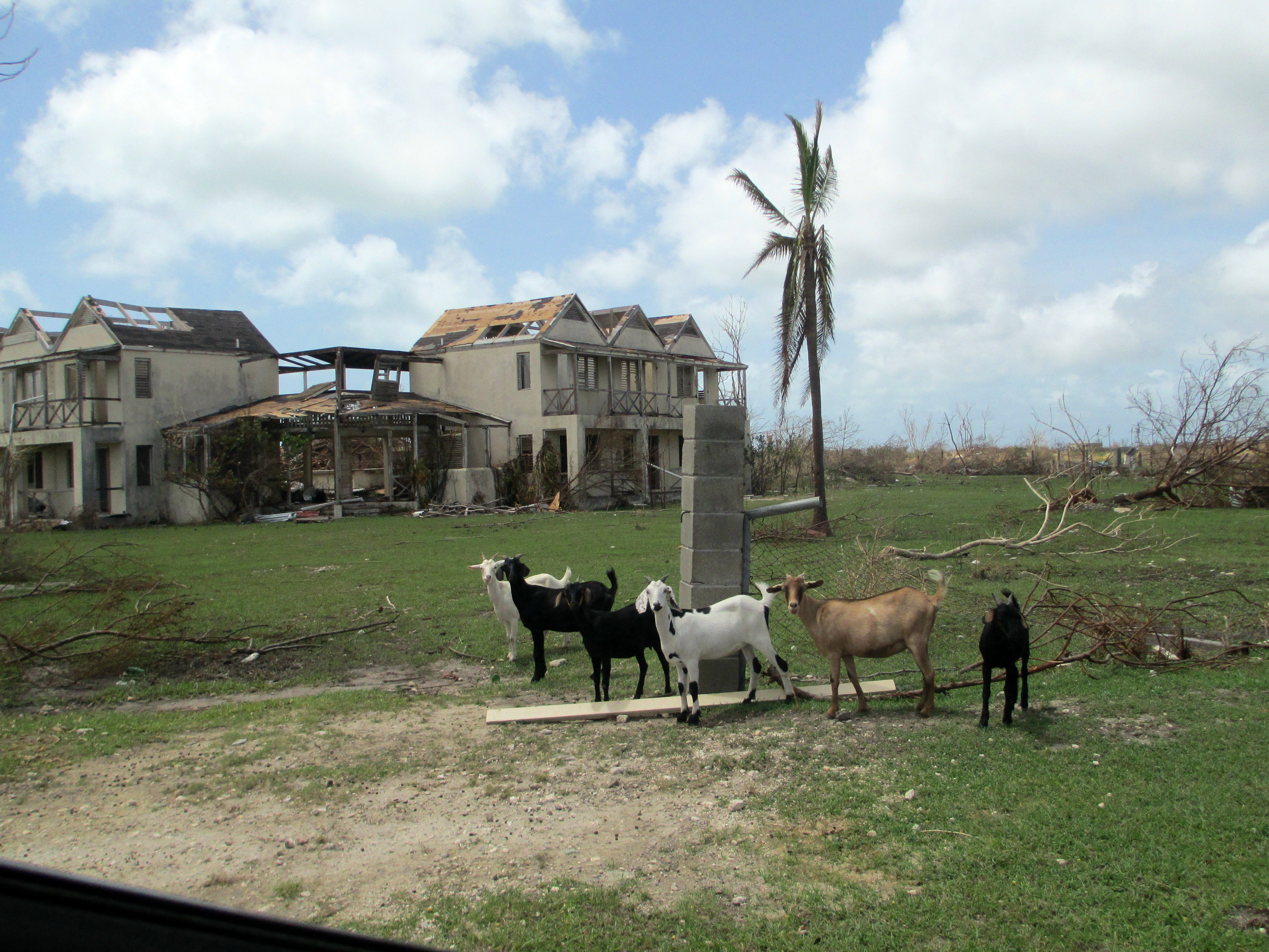 Goats forage for food in front of damaged buildings. On Barbuda, animals were abandoned during the disaster. Credit: Antigua and Barbuda Humane Society

People were forced to evacuate the island, as Hurricane Irma destroyed or damaged 95 percent of the buildings here. They were not allowed to bring their animals or do not have permanent homes in Antigua to bring their cherished pets.

These animals clearly belonged to someone.

They wander through the shattered landscape, confused, hungry, scared and injured. The smell of death is heavy in the air and would be as disturbing to them as it is for our team, probably more as we at least know what happened to cause their world to change in the span of a few hours. 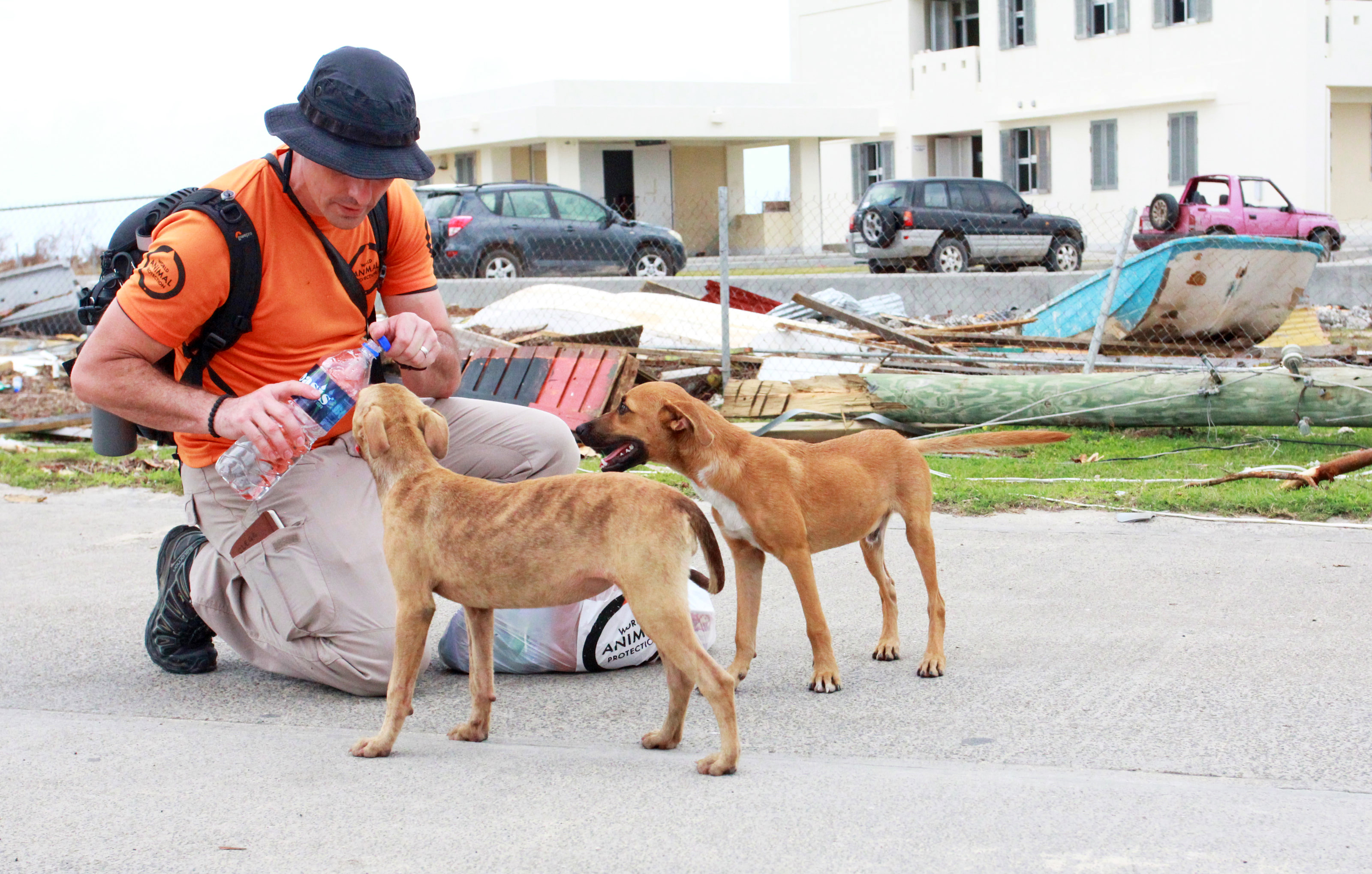 We were adopted by a band of friendly puppies almost as soon as our team got off the boat. They accompanied us on our assessment and took all the food and water we offered eagerly. They barked at other animals that we passed as if to say, “we’re a pack now. Stay away.” We were told they hang around the port every day. They look healthy, and as they eventually lose interest in our trek, we add them to our list of animals to help.

Dogs stay by ruined houses, waiting for a meal or attention from home that won’t come. Some are friendly, while others bark and snap as we pass. Sheep, goats, horses and feral donkeys are everywhere. Thankfully, the grass they need to survive right now is about all that is left. 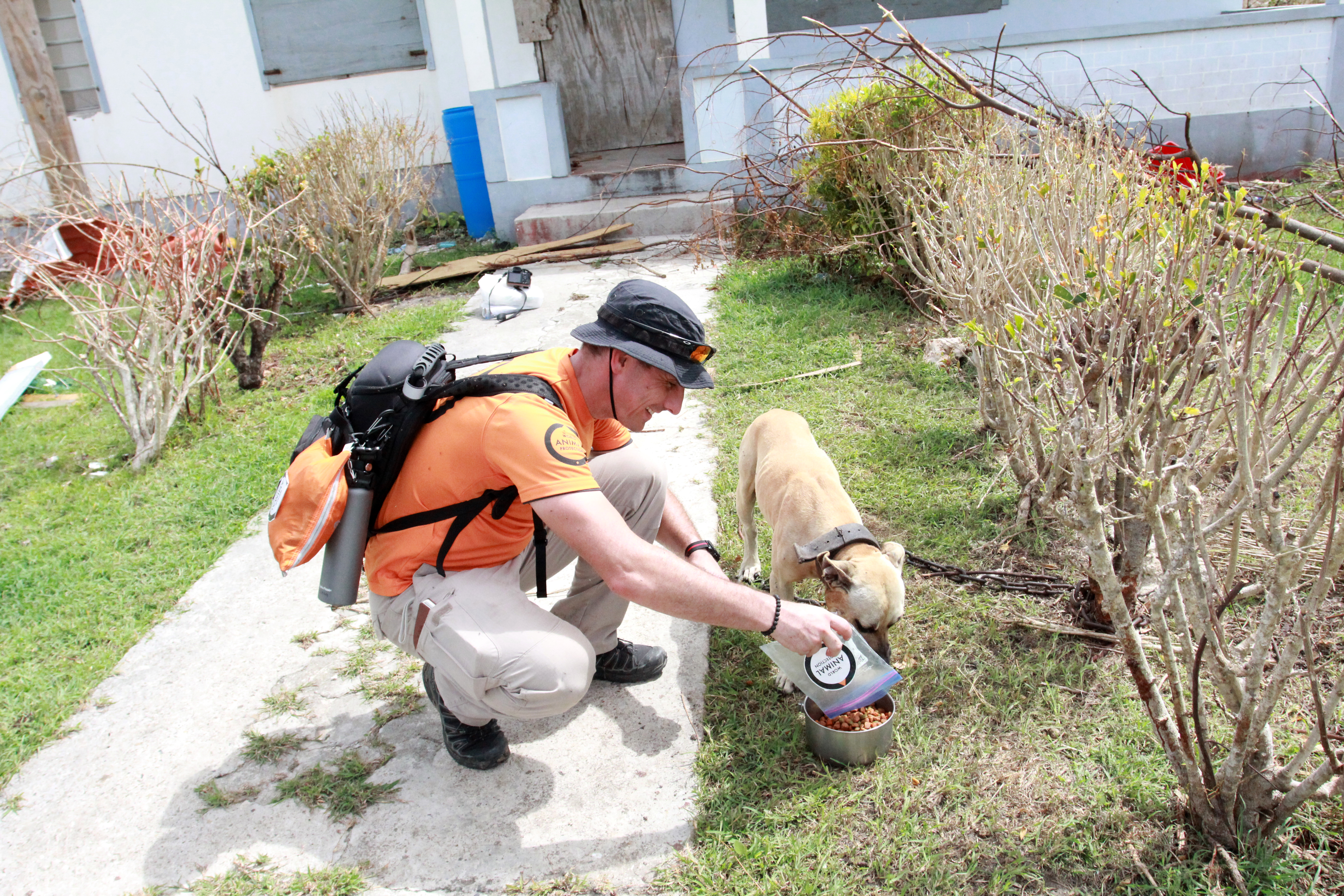 We catch glimpses of cats peeking out from their hiding places. They are stressed and fear the roaming dogs. As time goes on, the dogs will form packs and start to hunt the other animals. The baby lambs and goat kids will be in real danger then.

Piglets will be luckier. The local pigs are large, and not even the bravest dog will dare to take on a mother sow and her pigs.

We hear a light mewling coming from under some corrugated iron. We lift it to reveal a small orange-and-white female whose condition reveals she is well cared for and someone’s pet. We know that it is only a matter of time before she ends up hurt or worse. We decided to take her with us back to Antigua, where she will stay at the Antigua and Barbuda Humane Society until we can find her owner. 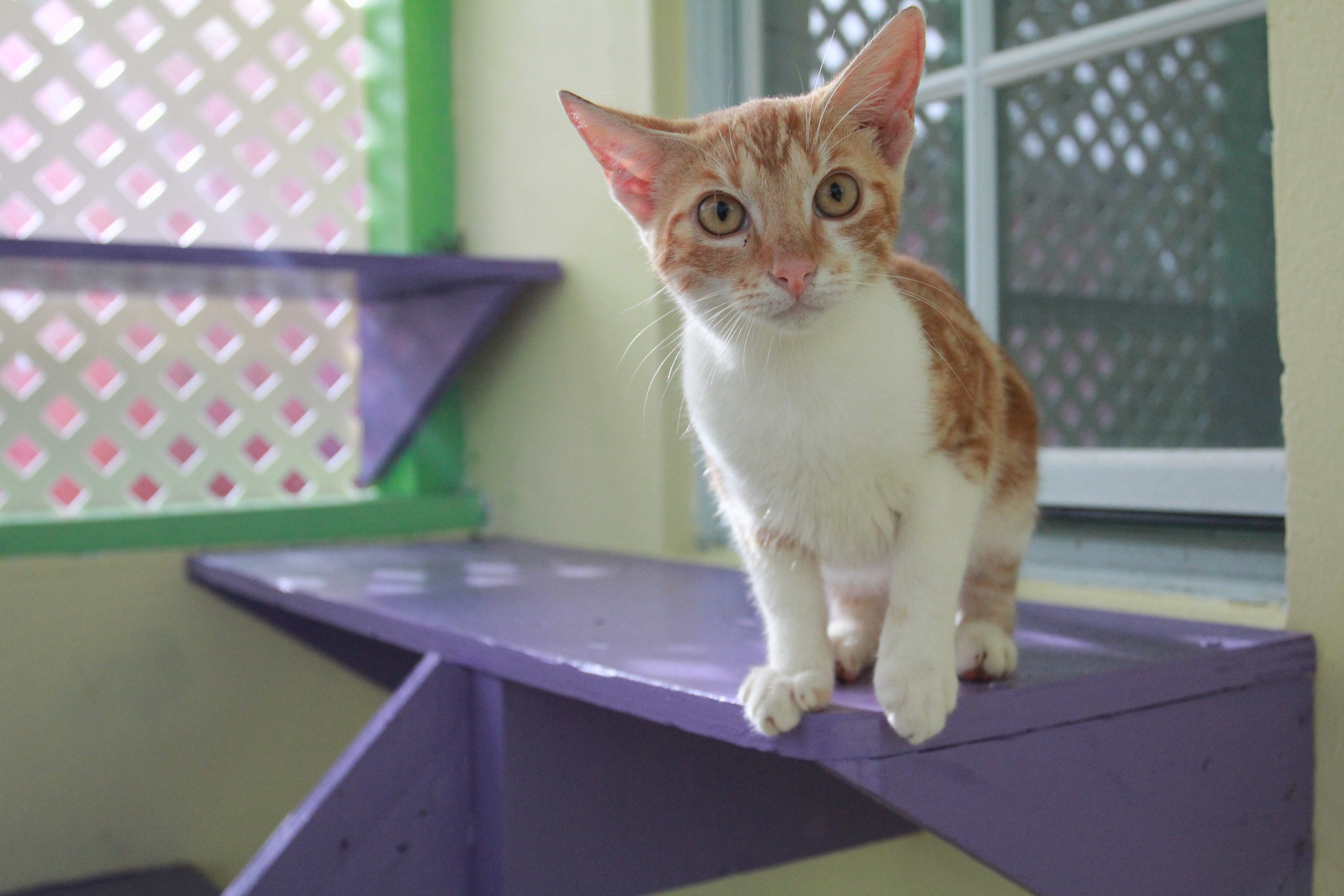 Tigger the cat, who is being cared for by our partner group the Antigua and Barbuda Humane Society, after he was found by our team in Barbuda after Hurricane Irma and taken to Antigua for shelter. © World Animal Protection

Back in Antigua, we later learn that this cat, who we call Tigger, is not a pet but a community cat that used to hang around a shop where people fed her, and she obviously developed a strong love and bond with people. Since her environment is destroyed and it will take a long time to get back to normal, the local Humane Society will seek a loving home for her where she can play and ask for scratches all day with a loving family.

Back on Barbuda, our partner Karen Corbin, Executive Director of the local Humane Society, has a list of pets anxious Barbudans gave us, and we stop at where their houses used to be calling out names, hoping to find survivors. Mostly, we just hear silence.

At one of our last stops, we call out “Ivory! Ivory…” Suddenly, a ball of excited energy burst forward, all wagging hindquarters and the happy face of a dog that knows it has found friends. What this must be like for the animals having their lives turned upside down and then all their people suddenly vanished. He’s very friendly but is obviously dehydrated. We gave him water and attach a leash to his collar. 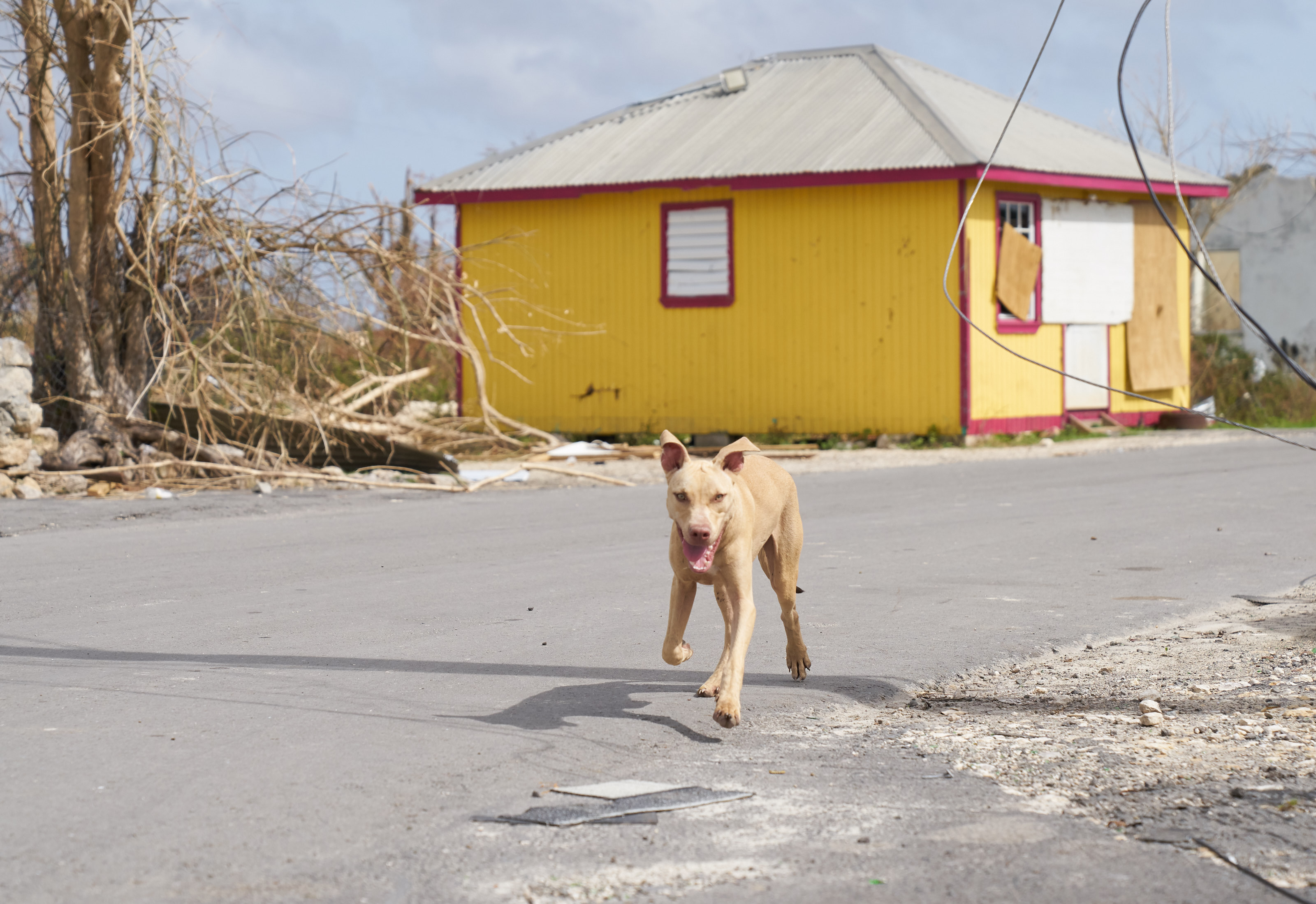 Our team was given a list of pets to search for in Barbuda, and they called the animals’ names when searching the island. Ivory (pictured) came running when his name was called and he was rescued by the team to be reunited with his guardian. © World Animal Protection

While we later learn from Ivory’s owner that this dog was not the real Ivory but a neighbor’s dog, we give him the temporary name of Mario. We learn from Ivory’s guardian that Mario’s owners keep fighting dogs, an illegal activity in Antigua and Barbuda, so we will not return this dog to them but instead, try to find him a loving and permanent home. We have also sent out a team with Ivory’s caretaker to keep searching for the real Ivory and will update our followers if we find him.

Our disaster response teams are in Antigua and Barbuda, St. Kitts, St. Maarten and Turks and Caicos working hard to feed, rescue, and deliver medical care to desperate animals affected by Irma. As Hurricane Maria approached earlier this week, our teams had to seek shelter and unfortunately wait out the storm before resuming their work.

It was very frustrating that as we were ready to roll out our aid delivery, we were delayed again by another massive storm. We feared for the animals on the abandoned island of Barbuda especially and can only hope they were spared the full brunt of Maria as she passed.

But now that it’s safe to do so, we’re getting back to work sheltering and finding homes for the local dogs and protecting the many, many other animals who need our help.