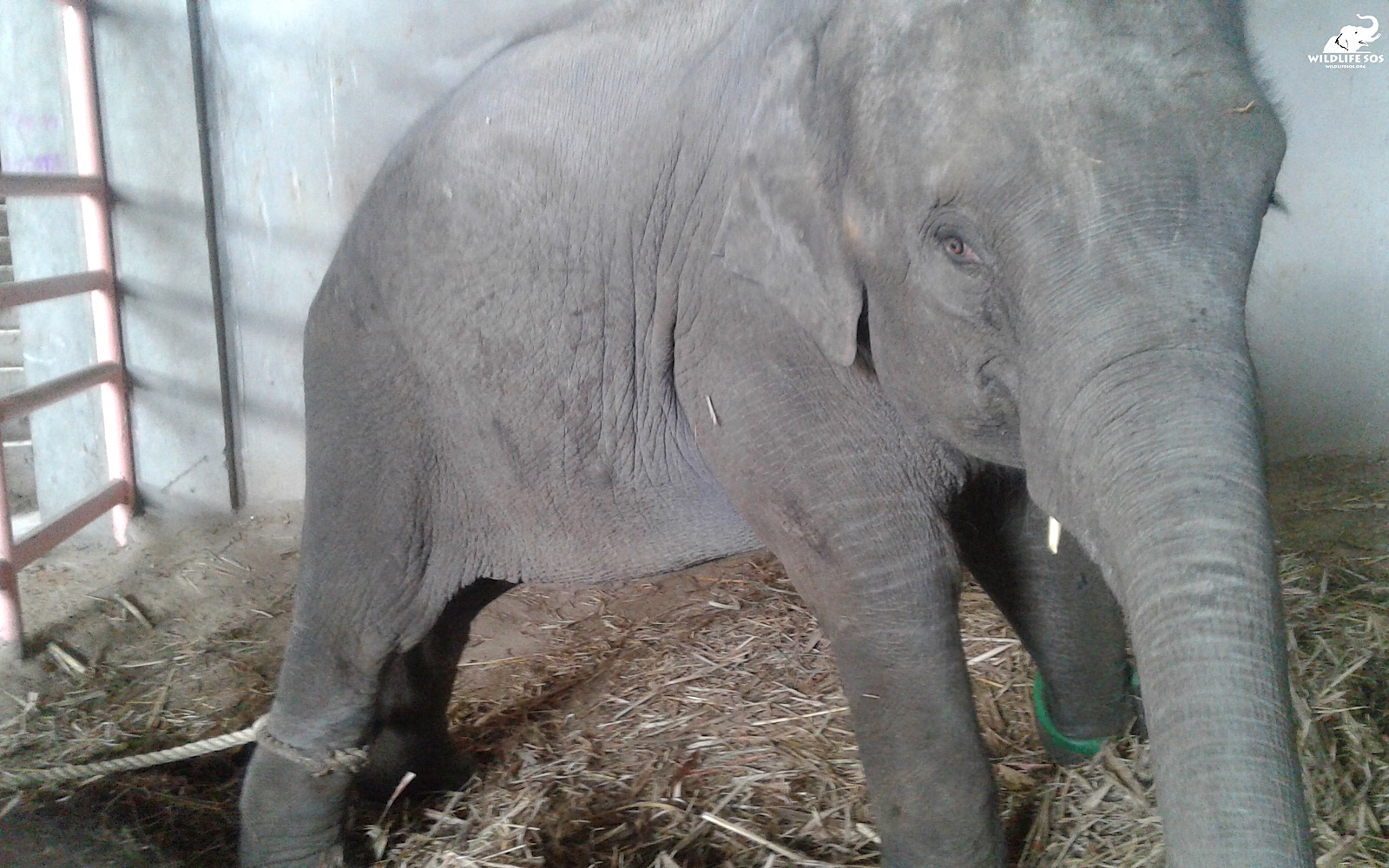 This is Suman. She’s six years old. Anyone who knows her past — and the bleak future that could await her — would never again consider riding an elephant.

We know that most of you would never have considered it anyway. But the great majority of people who don’t follow wildlife issues are completely unaware of the problems surrounding elephant riding. It remains an extremely popular tourist attraction in Asia, with hundreds of thousands of tourists flocking to places like India (where we operate) and Thailand every year, in part for the elephant interaction. And most of them mean well. 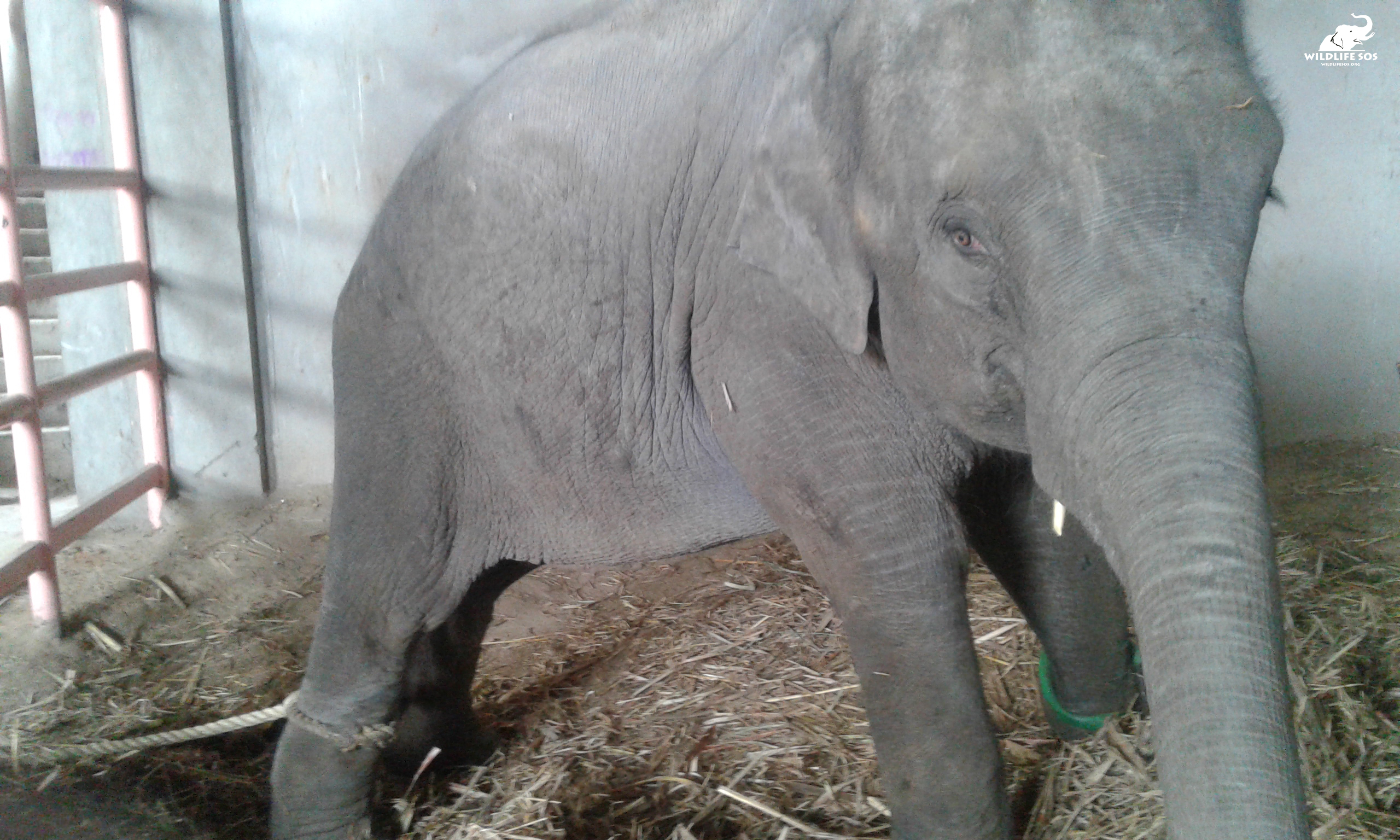 What’s kept hidden from tourists are the wretched working conditions for these elephants — not to mention the unconscionable abuses they suffer during the so-called training process (referred to in parts of Asia as phajaan, meaning “to crush” — i.e., the crushing of a young elephant’s spirit). And the abuses don’t end for these elephants once they’ve been “tamed,” either.

Most of them suffer decades of overwork, neglect, and continued abuse at the hands of their captors. Then there’s the fact that the few remaining wild elephant populations in Southeast Asia are being adversely affected by the trade’s insatiable hunger for fresh, young elephants. Remember, this species is listed as “Endangered” on the International Union for Conservation of Nature (IUCN) Red List. They are already on the brink. 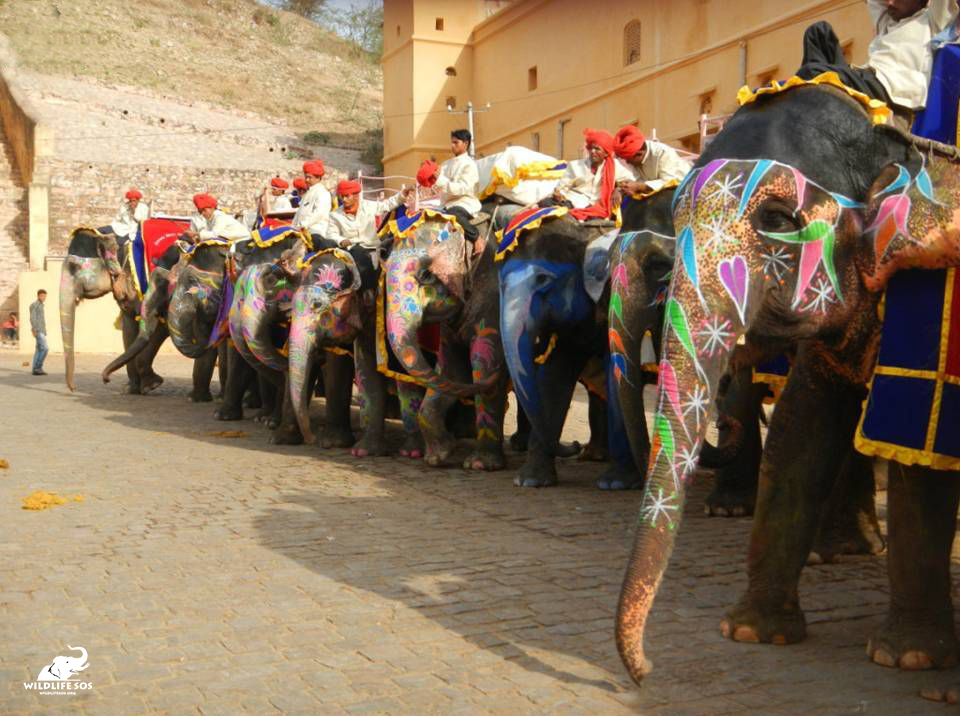 Suman’s story began when she was born into India’s notorious Moonlight Circus. Had the circus not been stripped of its ability to use performing animals, her life would have been about performing painful and unnatural stunts under the big top. The life of a circus elephant in India has always been a brutal one. So did Suman dodge a bullet leaving the circus? No, not at all.

From there, she was sold to the family of Sameer Khan — an elephant owner with a dark reputation who was captured in Brigitte Kornetzky’s documentary Where the Elephant Sleeps beating an elephant with a hatchet. Khan then rented her out (at three years old) to a television show called Bandhan, which People for the Ethical Treatment of Animals (PETA) and the Animal Welfare Board of India (AWBI) helped shut down based on allegations of on-set cruelty and neglect. Again, she did not dodge the bullet; she was returned to Khan in Jaipur. And today, little Suman’s fate is uncertain.

According to our informants, she’s being kept in darkness underground while Khan decides what to do with her. Most likely he’ll employ phajaan to make her give elephant rides for the rest of her life, or sell her to some other unscrupulous owner. 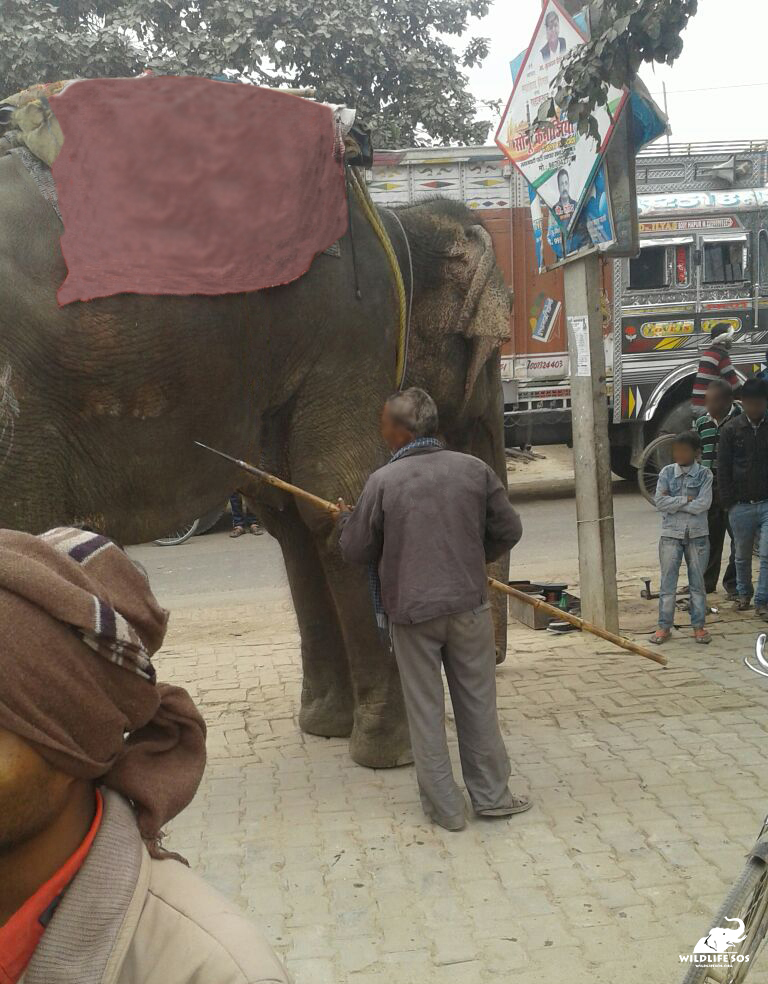 We can’t tell you what awaits Suman if Khan auctions her off again. But we can talk about her life in Jaipur if she is made into a riding-elephant: It will be harsh. First of all, Jaipur can be witheringly hot. There is very little water. And the working elephants there are forced to carry tourists up steep hills covered with sun-baked pavement that damages their tender footpads, all day. But before Suman can even start the torturous life of carting tourists up and down those hills, her spirit will need to be sufficiently “crushed.” The process has two distinct steps.

Step 1: Isolation. Because elephants are deeply social beings with complex family structures, splitting them up them wreaks havoc psychologically. Suman has already been forcibly separated from her mother; witnesses told us that Suman “screamed” throughout the ordeal. Since then, she has been confined to such a small space (about the size of a tool shed) that she’s exhibiting what biologists call “stereotypic” behavior — visibly anguished movements like bobbing her head, weaving, pulling against her constraints, and so on.

Step 2: Physical abuse. Once a young elephant is isolated and psychologically vulnerable, the physical abuse is stepped up. The elephant is restrained in a small area with chains and/or ropes. Beatings ensue, taking many forms, with tools like spiked chains, bull-hooks, fire, and, as we saw, even hatchets being employed. Throughout this torture, the elephant is ridden against her will by a human. Lasting psychological damage is the result. The elephant must develop a debilitating and permanent fear of human beings, whatever the cost.

As for Suman, once she has been “crushed,” her new life of servitude can begin. As we’ve seen in Jaipur, she might work from 4:00 a.m. until midnight, hauling loads and people through hot, noisy streets with little access to shade and water. She might become permanently dehydrated and/or malnourished. Her feet will crack and abscess. There will be scant if any proper veterinary care. She will be shackled up in a small space whenever she’s not working. She will be deprived of the companionship of other elephants. And this will be her life until she finally lays down and gives up. 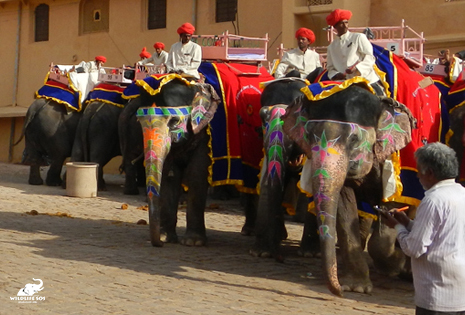 Is it any wonder that working elephants in Jaipur are dying at an alarming rate? Is anyone really surprised when an elephant “loses control” and attacks its so-called master? (In recent years, hundreds of mahouts, or trainers, have been killed by their own elephants in Asia.) These are understandable reactions to cruelty, deprivation, and relentless stress.

Suman needs an intervention now, before this kind of damage is done. So does her mother Chanda, who is already working long hours in the streets of Jaipur as a riding-elephant. And so does Suman’s father Bijli, also laboring in Jaipur as a work elephant.

Regardless of the injustice and violence that’s already been done to Suman and her parents, we know the kinds of lives they can have. In 2015, we rescued Suman’s sister Peanut from the same circus that held Suman — when Peanut was the same age Suman is now. We barely missed rescuing Suman at that time; she had been shuttled away just before our team arrived. Those precious hours mean that today these two sisters’ lives are devastatingly different: Peanut is rambunctious and spirited. She gets medical care and healthy food. She has green spaces to roam, and other elephants to roam them with. Meanwhile, Suman remains tied up, hidden underground, anguished and alone. It’s heart-breaking for us knowing how close we were. Regardless, we plan to change Suman’s destiny, and her mother and father’s too, by reuniting them all with Peanut at our sanctuary. (Please see Suman’s page on our website here for more details.) 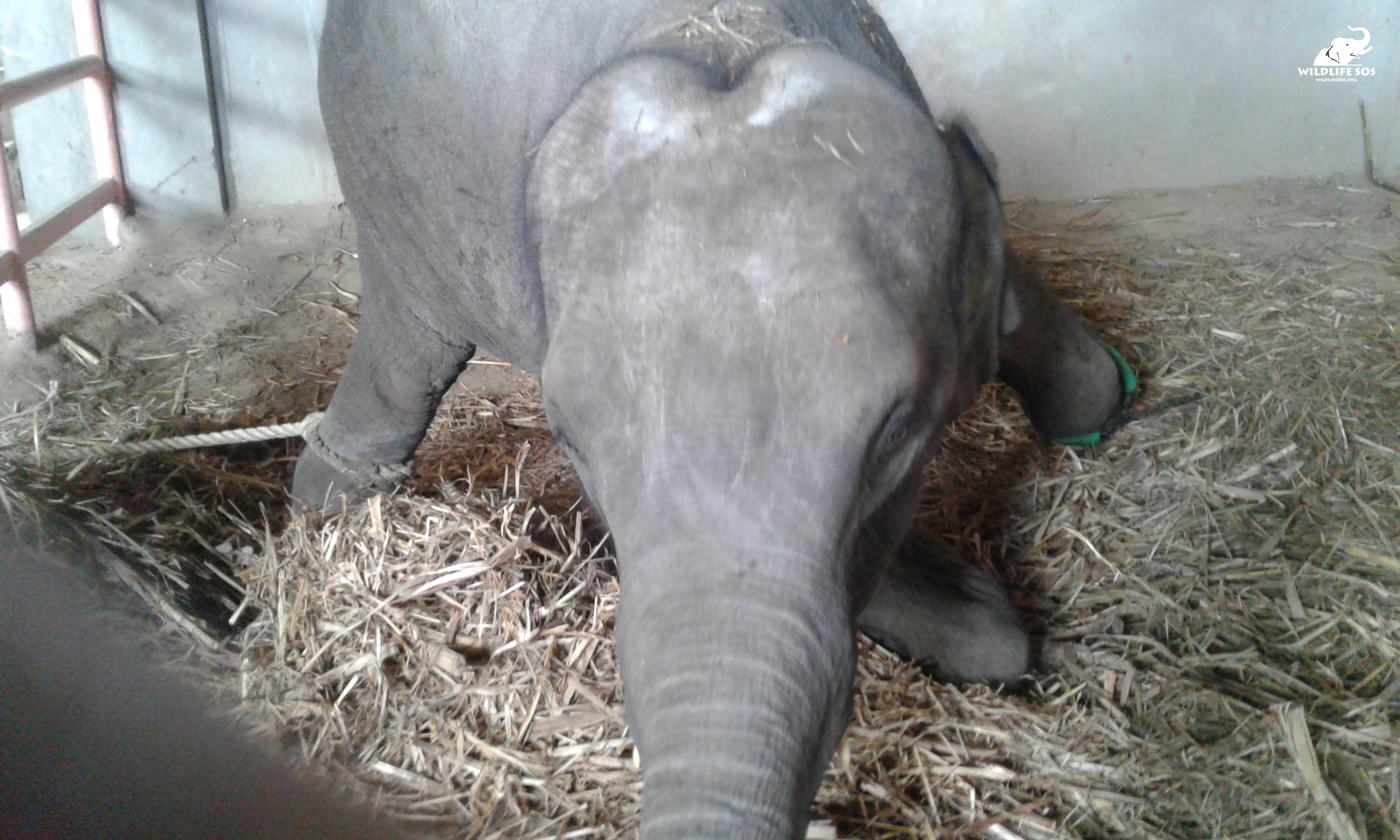 But this is just one elephant family. Thousands of others throughout Asia also need help. We know of well over 100 in Jaipur alone. The exploitation of elephants for labor and human amusement is a monumental problem that, as much as it pains us to say this, cannot be solved overnight. It cannot be mitigated by painstakingly rescuing one elephant, or even one family, at a time. A shift in social attitudes is required, and with enough public education and awareness and pressure on lawmakers, we know it can happen. Still, all that takes time, and elephants are suffering right now. With this in mind, we’ve launched a program to at least alleviate some of their pain by training mahouts inhumane and respectful ways to “manage” them. It’s not the long-term solution we crave, but it is alleviating some of the suffering on the ground right now.

A strategy we can all employ while pushing for long-term change is as obvious as it is effortless: Never ride an elephant — and be vocal about why! If a travel company promotes the activity, let them know the facts and leave a comment on their site. Be a voice for the voiceless to anyone who is interested, and never worry about sounding preachy or teacherly; a 2014 World Animal Protection survey showed that more than 50 percent of tourists who rode elephants did so because “they love animals.” These folks would seriously reconsider the activity if they could see the sad truth underneath the pretty paint and colorful howdahs (saddles).

Putting an end to this tragic industry will take time and coordination on multiple fronts. But together we can do this!