5 Ways You Can Help End the Dolphin Slaughter in Taiji, Japan 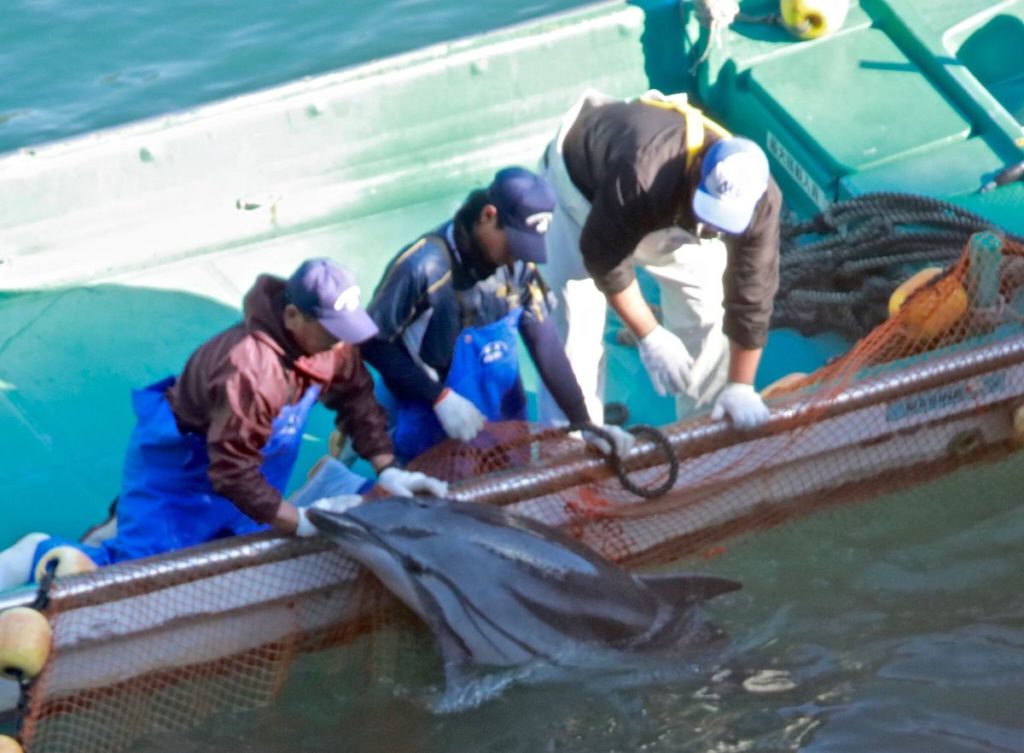 Another deadly season for dolphins and whales has begun in Taiji, Japan.

Every year, a large-scale, brutal hunt of dolphins takes place in the small fishing village. During this period, hunters utilize techniques to herd large numbers of dolphins to shore. Once trapped in a cove, the dolphins are either brutally slaughtered for their meat or captured to be sold to marine parks.

The Drive Fishery Quota for the 2019/2020 dolphin hunting season in Taiji, Japan targets 1,749 dolphins across 9 species, including bottlenose dolphins, pilot whales and false killer whales. The season started on September 1.

This may seem like something out of your hands, but there are easy ways every person can help protect these dolphins and end this inhumane practice.

1. Take the pledge to not buy a ticket to a captive dolphin show.

While the Taiji drives were traditionally centered around hunting whale and dolphin meat for food, recent years have seen a change in incentives surrounding the hunt.

Dolphin meat is no longer profitable, as the high mercury levels have proven that it’s not healthy for human consumption. However, the sale of live dolphins is reason enough to keep the hunts going. A dead dolphin sold as meat can only bring in around $600, but live dolphins can be sold into the captivity industry for as much as $150,000 each. It’s clear that at these prices, the capture and sale of live dolphins is a very lucrative business for fisherman.

The captivity industry drives the hunt for dolphins, so the best way to end this practice is to refuse to support facilities that keep dolphins and whales captive for human entertainment. As long as people are buying tickets to dolphin shows and supporting marine parks, there will be a demand for cetaceans and a financial incentive for fisherman.

Take the pledge to not buy a ticket to a dolphin show and sign the petition through Dolphin Project.

2. Send a letter to the Prime Minster of Japan, Shinzō Abe.

Voice your disapproval of the dolphin hunts by sending a letter to the Prime Minister of Japan. Call on the leader of the country to show true leadership and end the inhumane dolphin hunts, protect dolphins, and help restore Japan’s international integrity and support from the world’s public. Almost 25,000 people have sent a letter through Dolphin Project’s template, and you can add your name today!

3. Volunteer to join the front lines with Dolphin Project.

Dolphin Project has been on the front lines of the dolphin drives in Taiji for 16 years. The mission of the organization is to spread awareness around what is happening and ultimately inspire people – both in Japan and globally – to take action.

Through the Cove Monitor Program, volunteers serve a crucial role in Dolphin Project’s mission, serving as the eyes and ears of what is happening on a daily basis in Taiji. Cove Monitors witness the hunts, report on daily hunting activity, document captive transfers and share real-time footage with the public.

Although dolphin and whale meat has been proven to contain unsafe levels of mercury for human consumption, the Japanese government allows it to be sold in markets. During the Taiji hunts, the dolphins that aren’t captured to be sold to marine parks are brutally killed and their meat is sold to local markets.

Check out our daily recipes for healthy ideas that don’t harm dolphins, whales, or any other living thing. One Green Planet’s Food Monster app gives instant access to vegan, meatless and dairy-free recipes that are delicious and planet-friendly.

5. Educate yourself and others.

In this world, education is key. The more people that know this is happening, the more pressure we can put on the Japanese government, fisherman, marine parks, restaurants and supermarkets, and every other entity that is involved in one way or another.

The Academy Award winning documentary, “The Cove”, is a powerful film that shines a spotlight on the Taiji hunts. Hosting a movie night with family or friends to illustrate what is taking place in Japan sends a powerful message and inspires people to help.

The hunting season is expected to last six months, through March 2020. Activists are dutifully keeping track of the number and species of cetaceans that are caught, killed and released. You can stay informed by following the data and statistics through Ceta Base or Dolphin Project’s weekly updates.