5 Happy Rescued Pigs on Instagram Who Advocate for Their Species 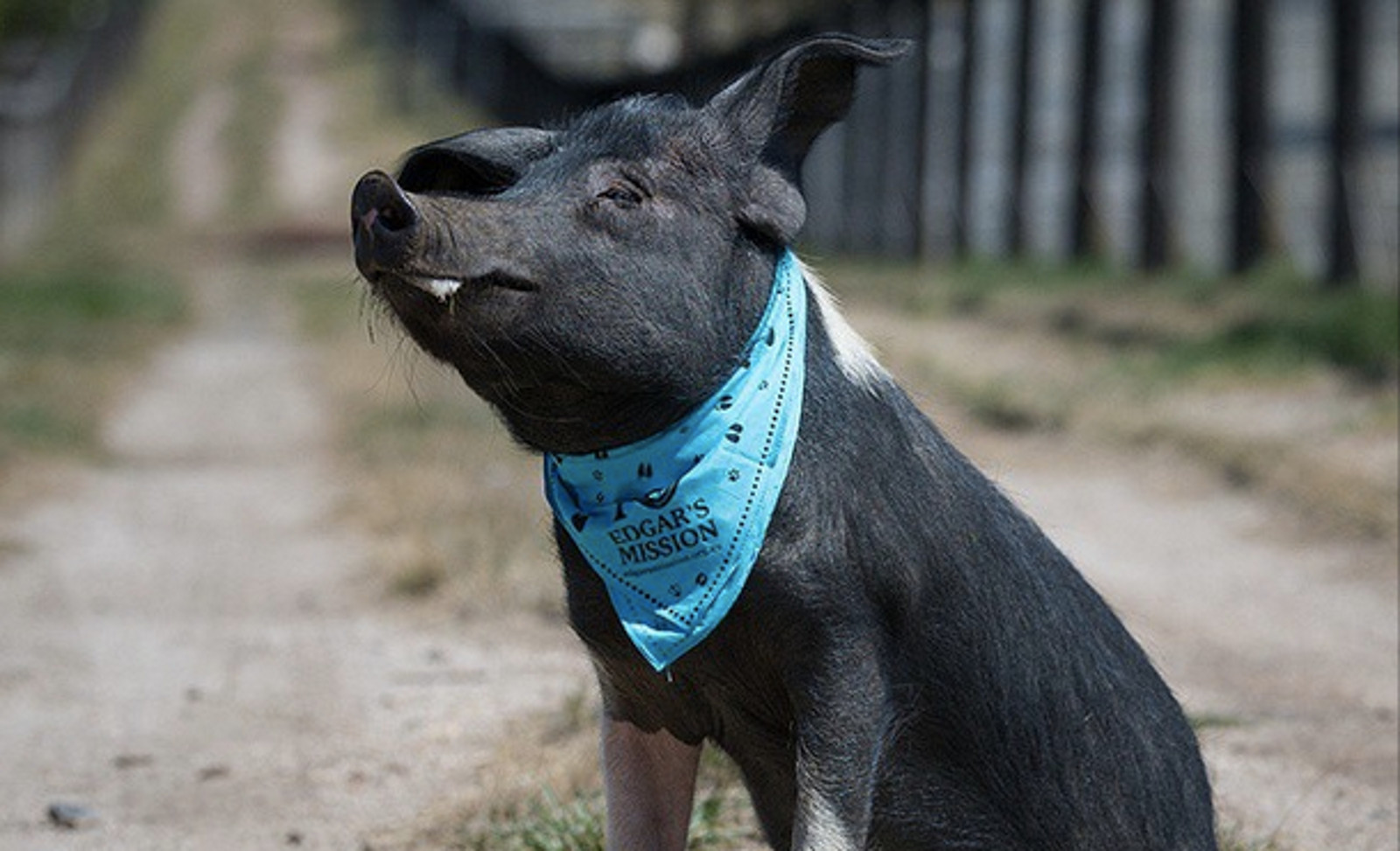 Most of us have a favorite animal that we follow on Instagram—Grumpy Cat, Toast, or my namesake dog, Maddie (of Maddie On Things fame). However, many of today’s most famous Insta-animals aren’t your standard dog or cat. Now, the Instaverse is a completely different animal. Pigs are taking over — and scrolling through the day’s Instagram feed has never looked so good.

Sadly, most people overlook pigs due to the fact that they only think of them as “food” animals. As such, people are afraid to think of pigs as living, feeling animals; however, pigs are just as intelligent as dogs, have dynamic emotional lives and are just as deserving of love as any other living being.

Over the years, an increasing number of farm animal sanctuaries have been taking to the Internet to share pictures, videos and funny stories about the pigs in their care and start to change the way people think about pigs. These adorable rescued pigs are ambassadors for others of their kind and are helping to show the world that all animals are someones and not somethings. Plus – with such precious little faces, who can resist the urge to troll on Instagram to see these babes?

There are many oinky friends you can follow on Instagram, but out of all the pigs in all the Interwebs that have become Instafamous in the last year or two, here are a few favorites that will make you go “Wee! Wee! Wee!” all the way home just to check your Instagram feed. 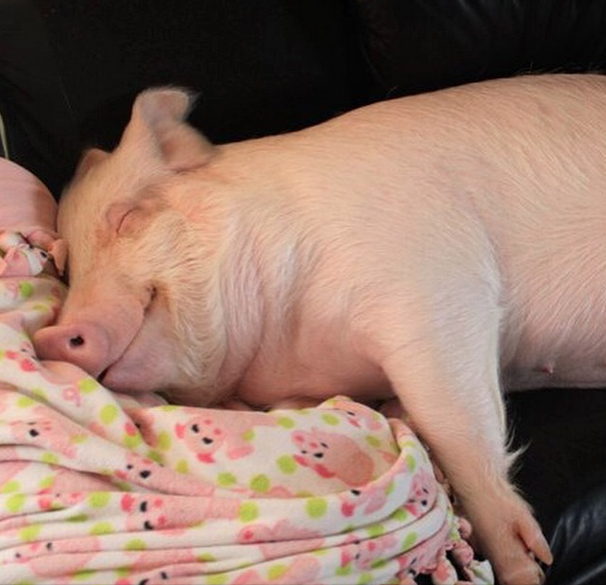 Esther, a large American Yorkshire pig, became Internet famous after her humans, Steve and Derek, adopted her thinking she was a “micro pig.” According to her humans, she grew to weigh more than 500 pounds in her first two years living with her new human family.

Now at more than 600 pounds, you can see Esther’s day-to-day activities playing with her feline and canine siblings, eating her favorite foods, playing in the snow and sleeping (there are several pictures of her laying on her bed, a twin-sized mattress on the floor of the master bedroom). 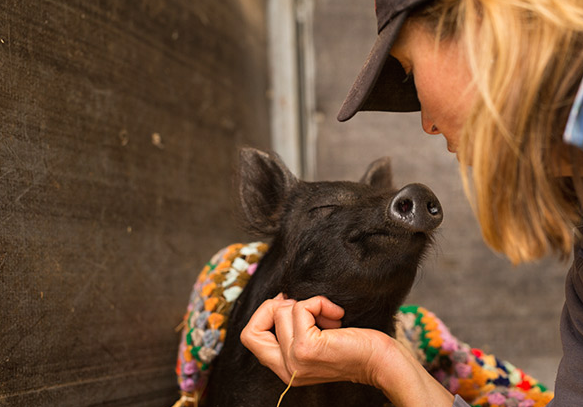 Winnie, short for Winifred, is a little Aussie living down under at a farm animal sanctuary called Edgar’s Mission in Victoria, Australia. Although she was very shy when she first came to the sanctuary, she soon warmed up to the humans and animals around her. She now loves belly rubs, keeping warm under her very colorful blanket and cuddles.

Winnie has been on One Green Planet before. With that sweet little face, she’s sure to be an Internet staple for years to come.

Follow Winnie and her friends on the Edgar’s Mission Insta-feed, here. 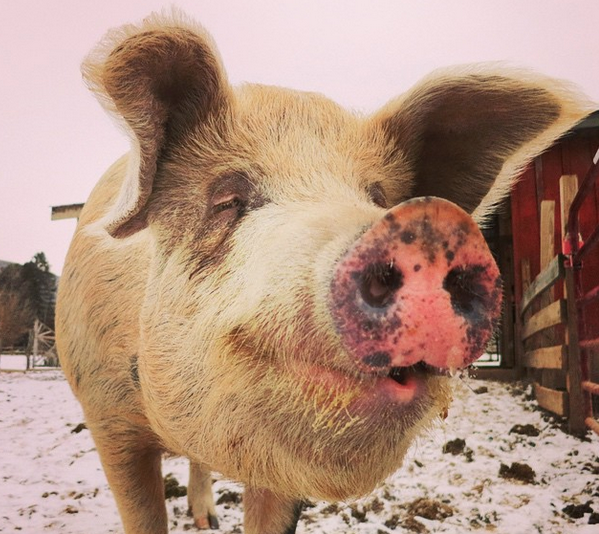 This little pig named Curly, short for Curly Tail, is one of the luckiest pigs ever. Born on a “free-range” farm in upstate New York, Curly very well could’ve been slaughtered for pork if a very compassionate family hadn’t stepped in to save her. The family in question attended a Land Conservancy event where a pig was going to be auctioned off with the winner getting the chance to go up to the farm and pick out the pig they wanted to be killed and cooked. Of course, this horrified and saddened family did what any good-hearted people would do—they won the bid, went up to the farm, picked out Curly and took her to the Woodstock Farm Sanctuary to live out the rest of her life in peace. Now she loves hanging out with her piggy best friend Olive, getting belly rubs and is one of the friendliest pigs at the sanctuary. 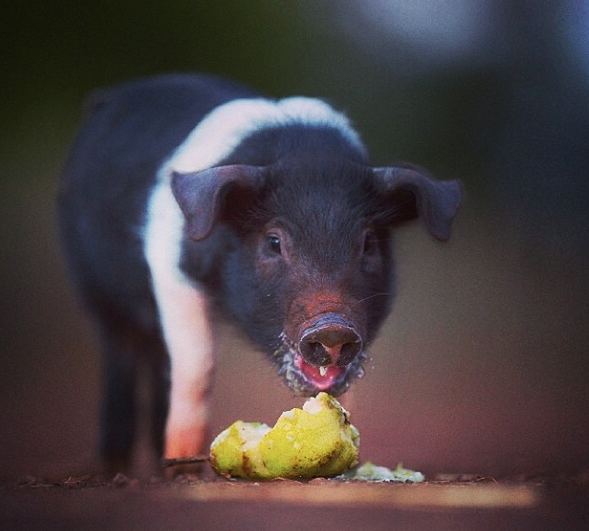 Like the other piggies on this list, this little guy is also quite lucky. When Leon was three weeks old, his mother fell on him, breaking and dislocating his right hind femur and damaging ligaments on his left side. The accident killed two of his siblings.

Fortunately for little Leon, the kind souls at Edgar’s Mission Sanctuary were able to build him a little piggy wheelchair so his hind legs could properly heal. He is now much bigger than he was at the time of the accident, although he is still known the world over as “The Pig on Wheels!” His hind legs are completely healed and although he is no longer tugging his little cart around, he is still one of the most adorable (and happiest) pigs at the sanctuary. In fact, a new Piggy Paradise enclosure is currently being built on the sanctuary in honor of Leon!

For more from Leon and his piggie friends, click here. 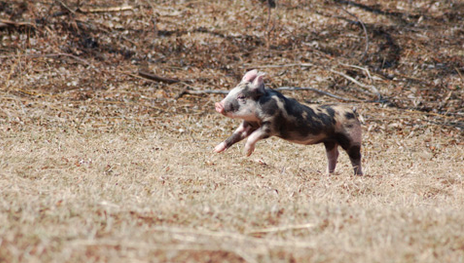 Rescued by Farm Sanctuary, Fiona came to the sanctuary from a factory farm. While she didn’t come alone, the other two-week old piglet who was rescued with her had been neglected and abused so badly that he didn’t make it. Fiona, however, was able to pull through the illness and emotional scarring that plagued her young life and find happiness at Farm Sanctuary. Now healthy, happy and living the good life, Fiona likes running around outside and playing with her roommate, a baby goat named Jack.

Hopefully, these little guys make you squeal in delight just as much as they have for millions of other Instagrammers!