Global Warming: It’s not About Powerplants, it’s Merely About Plantpower 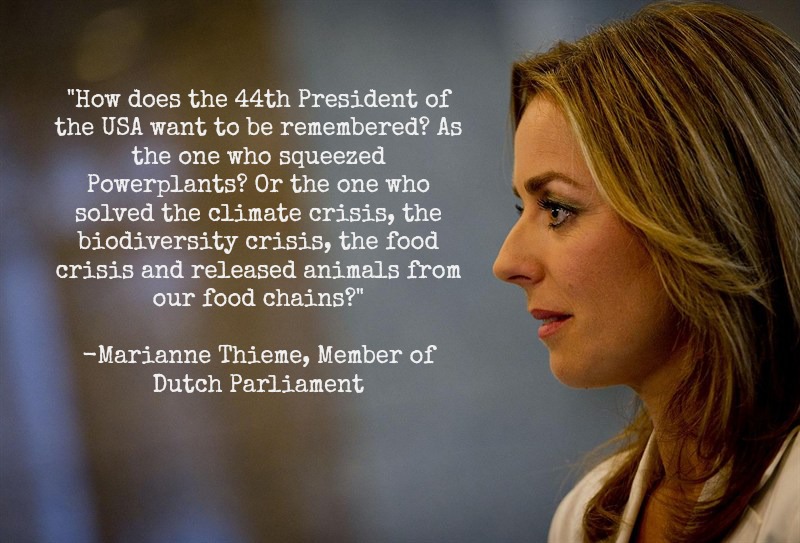 Global warming is the most clear and present danger for our lives, our safety, our wealth and for the future of our children.

President Obama decided to combat — for the first time in U.S. history — the unrestricted pollution of our atmosphere by carbon dioxide by cutting greenhouse-gas emissions from US power plants by an average of 30 percent from 2005 levels by 2030.

It’s a great first step which is barely needed. The 30 percent reduction represents an average. Individual states may be directed to cut carbon emissions at levels that are greater or less than that overall figure. But the combat against global warming doesn’t need 50 solutions for every state, what’s needed is one solution for 50 states.

That solution is not just about Powerplants, but can be found in a transition to Plantpower.

The Impact of Livestock on Climate Change

Livestock is a major cause of global warming. According to a 2006 report published by the United Nations Food and Agriculture Organization, the livestock sector generates more greenhouse gas emissions as measured in CO2 equivalent – 18 percent – than all cars, planes, trains, ship and trucks together.

In the report, Livestock’s Long Shadow, the FAO wrote that the global livestock sector is growing faster than any other agricultural sub-sector.  Such a rapid growth exacts a steep environmental price.

“The environmental costs per unit of livestock production must be cut by one half, just to avoid the level of damage worsening beyond its present level,” the FAO warned in 2006.

The Benefits of a Plant-Based Diet

Past research showed similar results. Annual agricultural carbon emissions could be reduced up to 90 percent by 2030 with agricultural adjustments, including a reduction in global beef consumption.

Scientists of Loma Linda University found the same outcomes and even more than that. A plant based diet not only helps to reduce greenhouse emissions, it also improves longevity. Different studies involving 96,000 US and Canadian men and women were conducted over the last decades.

“Throughout history, forced either by necessity or choice, large segments of the world’s population have thrived on plant-based diets,” said nutrition professor, Joan Sabate.

Now, people in emerging markets like India–with 500 million vegetarians–are developing a taste for meat, because they connect wealth with the consumption of meat and dairy.

That’s the fault of what we call ‘western civilization’. The US and Europe are the butcher and the milkman of the world, we’re exporting our mistakes planetwide.

In 2007, long before Al Gore, Bill Clinton and Bill Gates went vegan, we made a documentary about how livestock farming is connected to climate change.

Dutch politicians were furious  about us, they couldn’t believe our film Meat the Truth was evidence based. Scholars at University Wageningen checked our findings for more than three months and they had to admit: it’s all based on facts!

The world is at risk of “crossing multiple tipping points,” triggering dangerous global warming, if average surface temperatures rise by 4 degrees Celsius or more, according to the UN’s Intergovernmental Panel on Climate Change 2014 report .

Next to the 1 billion people suffering on obesity, we know that 1 billion people go to bed hungry each night, while livestock is swallowing more than 40 percent of the world’s grain harvest.

Researchers of the University of Minnesota found recently that we could feed 4 billion more with existing cropland, when we just decide to stop making animal feed or bio-fuels out of it.

Survival is not about powerplants, it’s about plantpower.

Scientists of the Free University of Amsterdam found that if all Americans did not eat meat for one day a week, they would save 99.6 megatons of greenhouse gas emissions. This would result in the same carbon savings as taking 19.2 million cars off the road in the USA!

The question is how the 44th president of the USA wants to be remembered? As the one who squeezed Powerplants? Or the one who solved the climate crisis, the biodiversity crisis, the food crisis and released animals from our food chains?

Flower power is here to stay, meat is just a big missed-steak.