The Forgotten Dolphins of SeaWorld: How We’re Fighting to Take Down Marine Captivity for Good 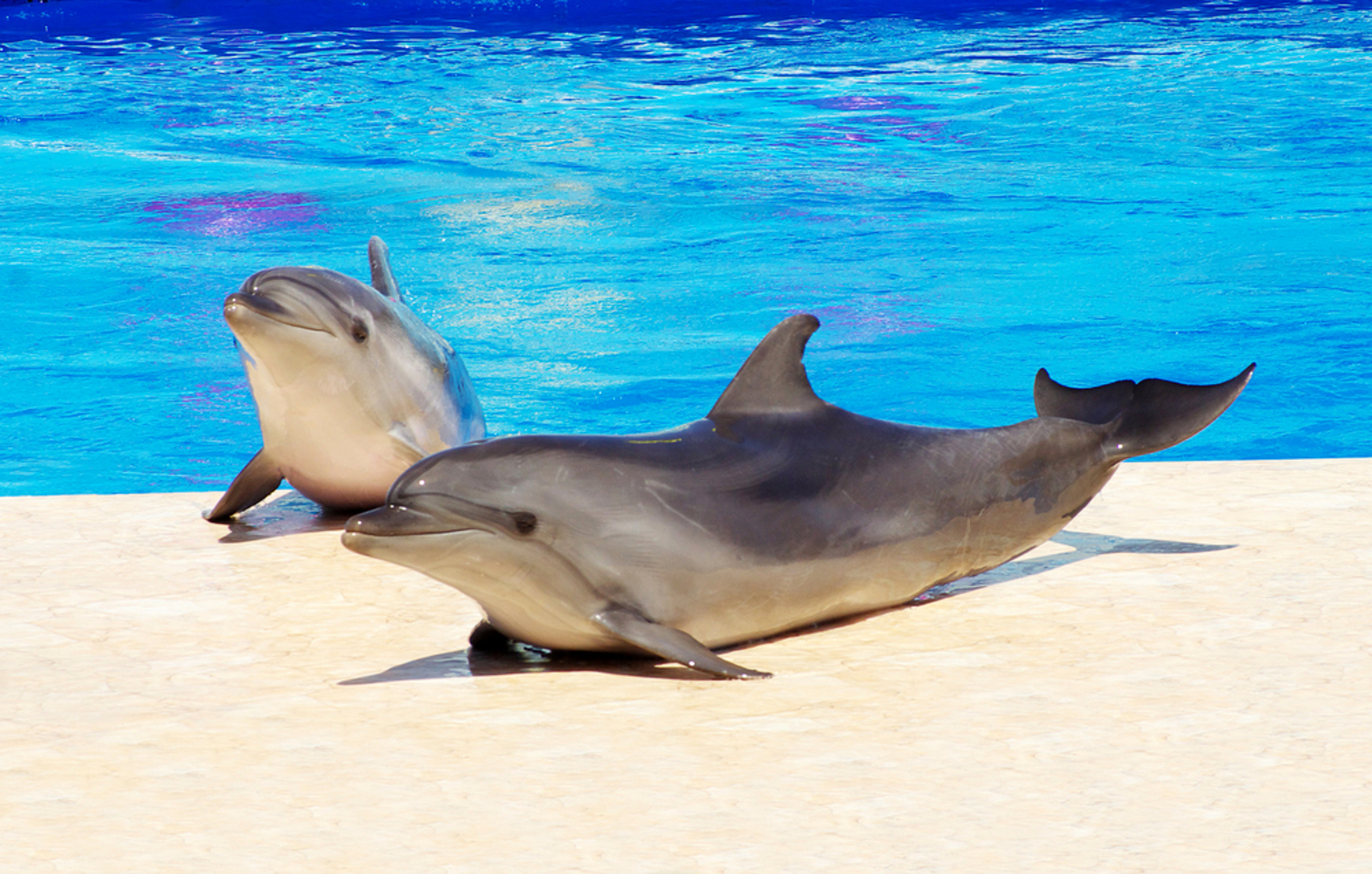 I work for WDC, Whale and Dolphin Conservation. We are the leading global charity dedicated to the protection of whales and dolphins – from species and populations to individuals. For many years a large part of my role has been working towards an end to whale and dolphin captivity. In this time I have seen big changes, especially in public opinion.

In recent years the media spotlight has, quite rightly, focused on orcas as the poster child for the campaign against facilities holding captive whales and dolphins. These powerful, social, highly mobile members of the dolphin family live an impoverished existence in concrete tanks. SeaWorld’s recent announcement to end its orca breeding program was a tacit acceptance of this and their decision will ultimately phase out keeping orcas in captivity at SeaWorld. While this announcement was warmly welcomed by welfare organizations around the world, there was one glaring omission – there was no reference to the same policy being applied to the vast majority of SeaWorld’s inventory of other whales and dolphins.

In addition to the 29 orcas it currently holds, in the U.S. and the Canary Islands, there are 168 other whales and dolphins held at its parks, making up more than 85 percent of its collection.

For these 138 bottlenose dolphins, 15 belugas, six pilot whales, five white-sided dolphins and four Commerson’s dolphins, it is business as usual.  Sadly, these forgotten dolphins will continue to be bought, transported, bred and made to do pointless circus-style tricks all in the name of “entertainment.”

Life in Captivity is no Life at All

A dolphin’s life in the wild is rich and full of choice. Exploring, hunting, socialising and, in some cases, migrating. As aquatic mammals, over 80 percent of these activities are done out of sight underwater. In captivity, 80 percent of a dolphin’s time is spent logging at the surface, looking for food or attention from their trainers who make all their choices for them.

In captivity, it is notoriously difficult to diagnose poor health in whales and dolphins and it is not uncommon for veterinary staff to notice a dolphin lacking in appetite one day, found dead the next.  Increasingly, scientific evidence strongly supports a number of concerns relating to a captive dolphin’s physical and mental wellbeing which can severely impact its health and survival. 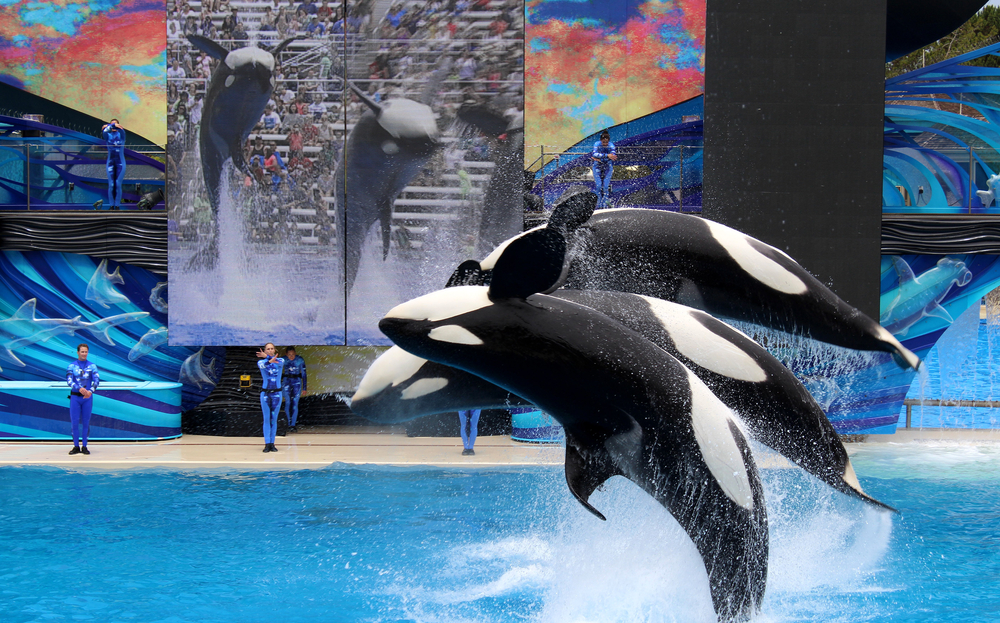 Several studies have documented higher annual mortality rates for bottlenose dolphins in captivity than in the wild. This does beg the question that, why, if marine parks continue to boast about their world-class veterinary care, restaurant-quality fish, and pollution free environments, captive mortality rates aren’t lower?

Stress is one of the important factors that may contribute to these higher mortality rates. Handling, confinement, restraint, isolation or overcrowding impact significantly on captive whales and dolphins and elevate stress levels.

For such highly social creatures where communication is a well-developed skill, the captive situation is severely limiting as different subspecies or even species may be kept together. These other “tribes” or “nations” do not share a common dialect, restricting social bonding and the ability to exchange information.

Let’s take a closer look at these forgotten whales and dolphins and shine a light on the creatures that continue to perform in the shadow of the Shamu stadium.

After orcas, bottlenose dolphins are the species most people associate with SeaWorld. Over the years, these dolphins have been star performers in their shows, petting pools, and swim-with programs. These high profile activities haven’t escaped the scrutiny of public opinion and SeaWorld has recently been forced to do another about turn and end its poolside public feeding programs after multiple incidents were reported of dolphins literally biting the hand that feeds it.

WDC has long campaigned against this practice – a by-product of the stress of confinement –  as regular feeding throughout the day has resulted in both obese and underweight dolphins as some creatures are more aggressive than others. It was also common for foreign objects to be dropped in the tanks leading to at least one dolphin developing zinc poisoning from consistently eating pennies. 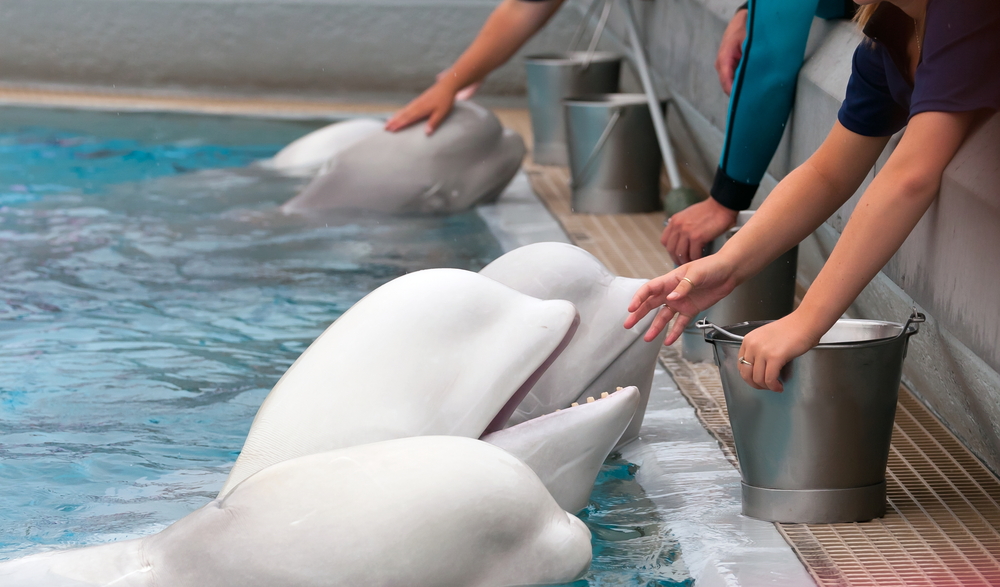 The plight of captive belugas around the world is no less heartbreaking. In the wild, belugas inhabit Arctic and sub-Arctic habitats and are perfectly adapted to extreme polar conditions.  In captivity, however, belugas have been kept in wholly inappropriate conditions such as in warm water Mediterranean sea pens off the coast of Turkey.

Like orcas, belugas have also suffered from aggressive interactions with other tank members. In 2015, Nanuq, a male beluga, on loan to SeaWorld Orlando from Vancouver Aquarium died from an infection in a fractured jaw. Nanuq, wild caught from Hudson Bay in Canada over 30 years ago, was involved in an altercation with other belugas, leading to his death.  His story, sadly, was yet another example of a lifetime of confinement in a stress-filled environment.

Marine parks have struggled for years to establish a successful beluga breeding program. In the summer of 2015, within the space of just a few weeks, two beluga calves died in marine parks in the U.S. At Georgia Aquarium, Maris lost her calf at just one-month-old, while in SeaWorld San Antonio, a premature beluga calf survived for just three weeks. There was more bad news to come for both facilities later in the year when Georgia Aquarium announced that Maris herself had also died. The reason given was “sudden, acute animal death”!  While in SeaWorld San Antonio it was announced in October that a female beluga called Stella had also passed away – she was just two years old.

It was around about this time that SeaWorld, in a rare bow to public pressure, backed out of a deal by Georgia Aquarium to import 18 wild-caught belugas from Russia into the U.S. After several high-profile court appearances, Georgia Aquarium decided not to appeal a judge’s ruling and thus brought to an end this years-long import saga. The ruling was a significant win for WDC, who was a plaintiff in the appeal case, the anti-captivity lobby, and wild beluga populations and also highlighted a growing distaste among the public for wild captures.

In June this year, Bubbles, a short-finned pilot whale, died at SeaWorld San Diego after decades in captivity. She was captured from the wild in 1966 was considered to be the oldest pilot whale at SeaWorld and estimated to be ‘in her fifties’. Five of the remaining six pilot whales are all wild whales that were “rescued” by SeaWorld after stranding and are now a key feature of the marine circus.

Betsy was one of twelve dolphins captured in 1983 – half of these died within a year, some within days. Commerson’s dolphins are considered ‘high energy’ and notoriously difficult to train and as such don’t “perform” well in the game of choreographed entertainment. This is one of the reasons that today some of SeaWorld’s Commerson’s remain in the back pools away from public viewing.

SeaWorld San Antonio is the only park to hold Pacific white-sided dolphins and, since the death of Dart earlier this year at the tragically young age of 12, only five remain. Most are captive born except Betty who was captured from the wild in 1980. Latest reports reveal that Betty is currently under intensive veterinary care as tests reveal signs of inflammation or a possible infection. Dart was the fourth marine mammal to die at the San Antonio facility within a six month period. As the list of accidents, injuries and deaths grow ever longer WDC’s message is the same today as it has always been:  please don’t buy a ticket for any marine park, zoo or aquarium that holds captive whale and dolphins for our entertainment.

In recent years, WDC has taken this message to tour operators who actively promote marine parks such as SeaWorld to its clients. Our campaign has made significant inroads in highlighting the plight of captive whales and dolphins to these travel companies. Sir Richard Branson and Virgin listened to us back in 2014 and pledged not to work with any facilities that sourced whales and dolphins from the wild.

WDC also inputted to work by the UK’s largest travel association, ABTA, to develop animal welfare guidelines. While the guidelines include specific recommendations on Dolphins in Captive Environments, they are, by definition, just guidelines and as such unenforceable.  Frustratingly, ABTA members such as Thomas Cook, Thompson, First Choice, Cosmos and Virgin Holidays still struggle to fully comply. In one example, the guidelines recommend that whale and dolphin performances should only involve natural behaviors, yet ABTA members routinely promote and offer trips to facilities where dolphins can be seen jumping through hoops, pushing trainers through the water and shooting basketballs – hardly any of the behaviors you would expect to see in the wild!

Our conversations with ABTA continue to push for compliance with the guidelines and also underline the responsibility they have to the public who book trips with their members.

One of the toughest nuts to crack has been with British Airways (BA). We met with them in 2014 as they were keen to understand both sides of the captivity debate. The UK is rightly proud of the fact that the last dolphinarium closed its doors over 20 years ago and today there remains no political will or public desire for them to reopen anytime soon.  As the UK’s national airline we had high hopes for the BA meeting as their company’s environmental policy should reflect the nation’s ethics and values.

At the BA meeting, we presented a 250,000-strong change.org petition that was started by WDC supporter, Kathleen Haase, calling on the airline to end its relationship with SeaWorld.

WDC also produced the compelling scientific evidence BA requested, starkly illustrating how poorly whales and dolphins fare in captivity which, we thought, was well received. On meeting with SeaWorld, however, at a later date, the theme park persuaded them that all their care and welfare standards exceeded best practice – an opinion which BA preferred to believe.

Fast forward then to SeaWorld’s recent announcement to end orca breeding.  This welcome decision was due in no small part to the public that turned their back on this industry which has been in the business of keeping these creatures captive for over 50 years. SeaWorld is first and foremost a business and any shrewd business must react when its share price dives, its PR machine falters and visitors start to desert their parks in droves.

SeaWorld’s senior management have listened to the public and media pressure and seen the light on captive orcas … but it is not enough.  There needs to be a similar commitment for the other 168 whales and dolphins for which no comparable announcement has been made. Belugas and the other dolphins all face the same risks to their health and welfare as captive orcas.  Why is their situation less important?

Isn’t the time now right for British Airways to revisit its position on supporting these facilities and end its business relationship with SeaWorld?