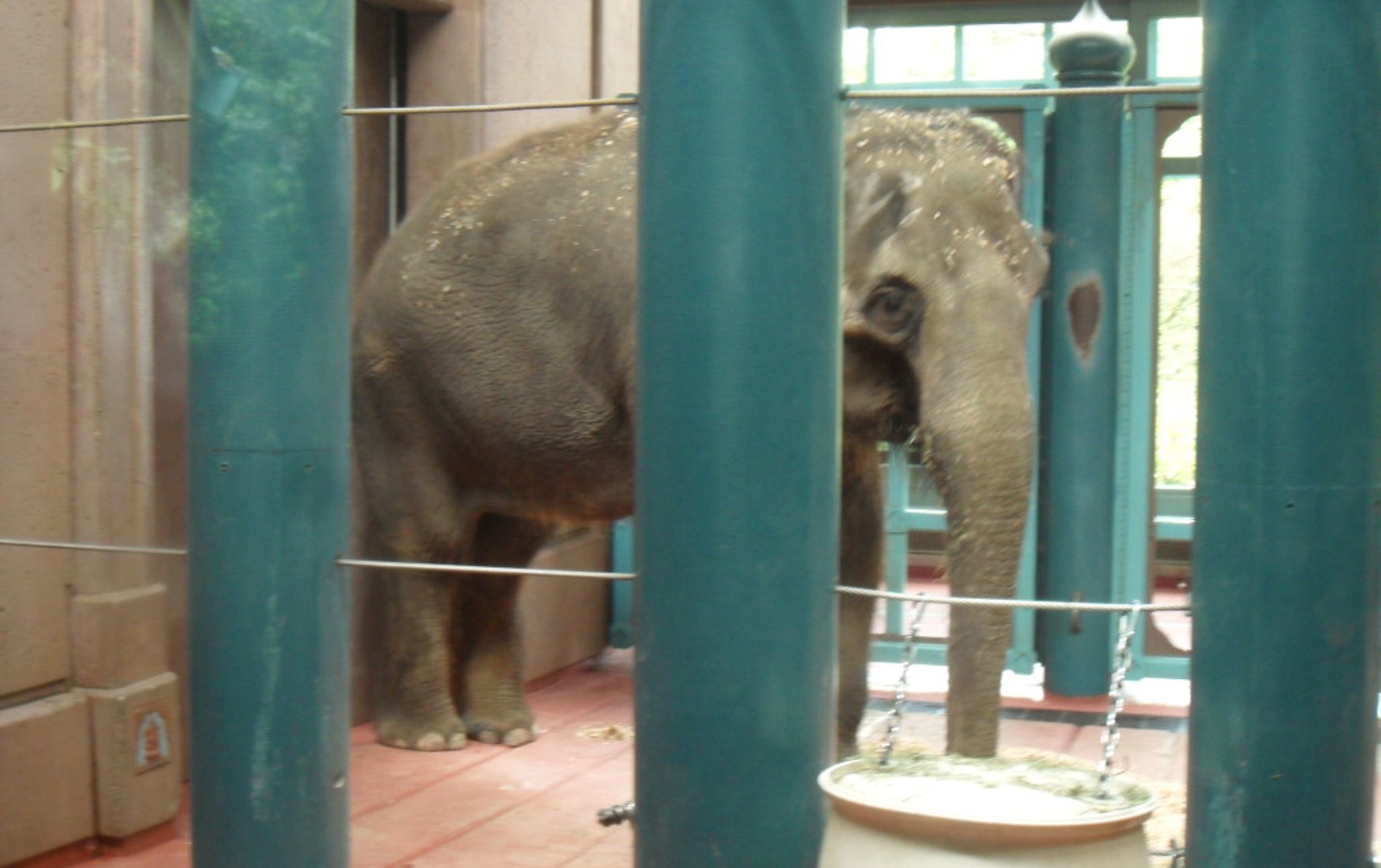 The history of Seattle’s Woodland Park Zoo dates all the way back to the 1893. The zoo began as part of the estate of Guy Phinney, a wealthy Englishman who set up the park on his personal home off the shores of Seattle’s Green Lake. The first animals to live in the park were deer, in following with a traditional English park. After Phinney’s death, the park was expanded and a collection of animals owned by the Lake Washington Cable Railway was brought to live in the new facility.

From these humble beginnings, the Woodland Park Zoo has developed into a booming tourist attraction that sees more than one million visitors every year. Operating with the mission that many other zoo parks share, “[to save] animals and their habitats through conservation leadership and engaging experiences, inspiring people to learn, care and act,” Woodland Park Zoo maintains 1,100 animals representing nearly 300 different species. Of all the species of animals that reside at the zoo, the Woodland Park elephants have garnered a lot of media attention recently.

There are currently two Asian elephants, Bamboo and Chai, living at the zoo. Bamboo and Chai were both born in Thailand and came to the zoo when they were only one-year-old. Over the course of the four-decades these elephants have lived at the zoo, they have outlived two other elephants (Hansa and Watoto). Due to the sordid history surrounding the health and treatment of the elephants, the residents of Seattle have rallied together urging the zoo to retire Bamboo and Chai to a sanctuary and end the elephant program. In response, the zoo directors have proposed a larger enclosure for Bamboo and Chai.

The Woodland Park Zoo has been featured on In Defense of Animals’ list of “Top 10 Worst Zoos for Elephants” seven times – winning its place in the “Hall of Shame” for repeat offenders. Taking the voice of the public into account, on top of this rather infamous designation, it begs the question of whether a larger enclosure would even begin to right the situation of Woodland Park’s elephants. To help consider this question, let’s take a look into the history of the elephants. 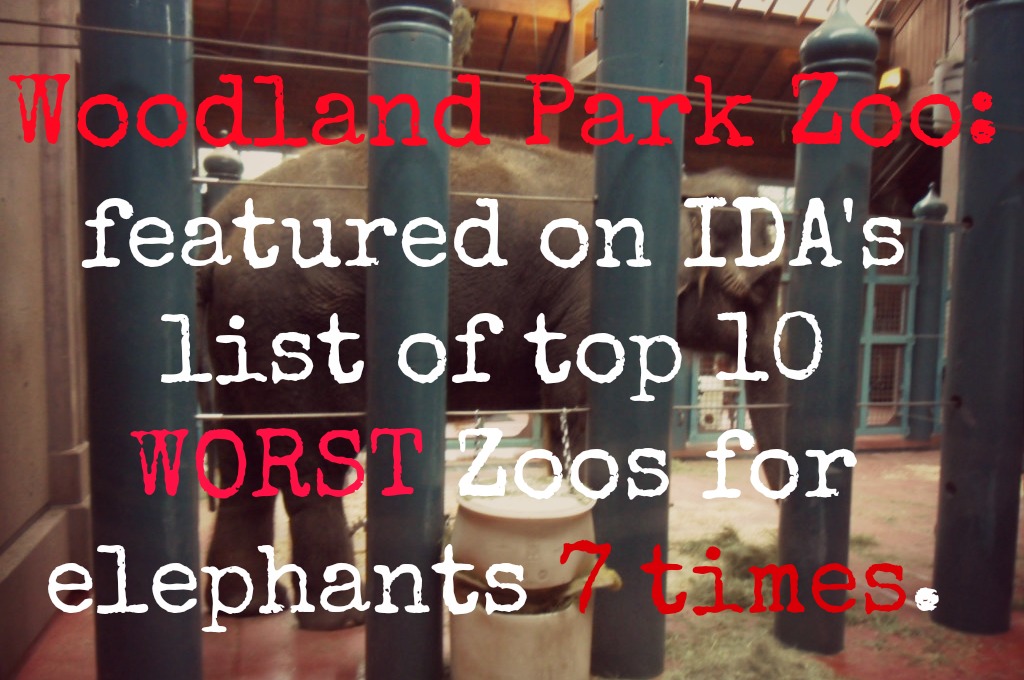 Bamboo is a female Asian elephant who was captured from the wild in 1966. She has spent virtually her entire life at Woodland Park, although she was briefly sent to the Point Defiance Zoo in Tacoma, Washington after she showcased aggressive behavior, and was deemed a troubled elephant. After gaining a dangerous amount of weight at Point Defiance  and exhibiting stereotypic behavior, she was sent back to Woodland Park where she lives today. According to In Defense of Animals, Bamboo suffers from foot problems and still exhibits stereotypic behaviors.

Chai was captured from the wild in Thailand in 1979. She has been largely used for breeding at Woodland Park Zoo. In 2012, a Seattle Times investigation revealed that the zoo tried and failed to artificially inseminate Chai 112 times. Of the many times she was bred, Chai bore one child, Hansa, who died at the age of six. Veterinary records show that Chai suffers from foot disorders and has been documented swaying back and forth – typical signs of great mental distress.

Hansa, Chai’s daughter died at the zoo at the age of six from Elephant Endotheliotropic Herpesvirus, a deadly strain of herpes. ALDF alleges that this death was caused by the improper practices held by the zoo. In Defense of Animals (IDA) asserts that the zoo “had long engaged in practices known to place Asian elephants at high risk for this nearly always fatal disease.”

When Hansa was born, she lived in the elephant enclosure with Chai and Watoto, an African elephant. According to IDA, keeping Asian and African elephants in the same enclosure heightens the risk for the spread of the virus, additionally Chai conceived Hansa in a Missouri zoo (a known hotspot for the virus) and then transferred back to Seattle. 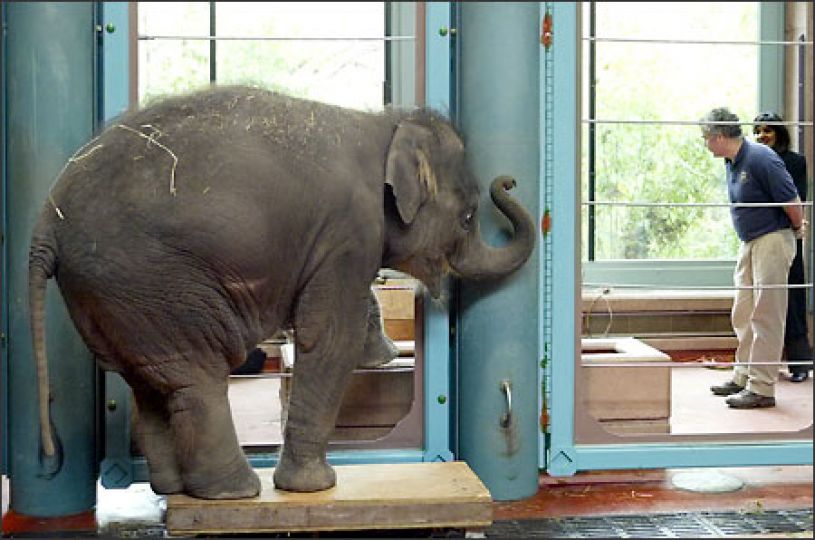 Watoto was a wild caught African elephant, who was brought to the zoo at a young age, like Bamboo and Chai. Watoto tragically passed away in August of 2014 after she was found laying on the ground of the facility, unable to get up. At 45-years-old, Watoto suffered from arthritis and lameness and was unable to stand back up. Zookeepers attempted to lift the elephant upright using heavy-lifting equipment and cloth straps, but were unsuccessful. The Seattle Times reports that “her condition quickly deteriorated, raising the possibility of internal injuries.”

Soon after, Watoto was euthanized. In a public statement, The Friends of the Woodland Zoo commented, “Arthritis and lameness in elephants confined in zoos is directly related to their environment and among the leading causes of premature death,” continuing, “Watoto was forced to stand on hard substrates during prolonged lockup in the barn and on unyielding compacted ground outdoors.”

According to Friends of the Woodland Park Zoo, “The elephants endured harsh training methods in the past including block and tackle and being hit into compliance with the sharp-pointed bull hook.”

In 2010, the taxpaying citizens of Seattle, represented by the Animal Legal Defense Fund (ALDF), filed a lawsuit against the zoo. The suit was filed against the city of Seattle to stop the “unlawful use of taxpayer dollars to support the Woodland Park Zoo’s reckless and illegally cruel treatment of its elephants.”

Bamboo and Chai are the only two remaining elephants currently residing at the zoo, and despite their long history together, they never bonded and do not engage in typical social behavior of elephants. The two share one acre of land that is split up into five pens, but reside locked in a cage in a barn for around half of the year due to Seattle’s cold, wet climate. It is typical that they will be locked up for 16-17 hours on end. The yard, barn, and sight line in the exhibit have not changed since 1986, adding to the boredom of the solitary elephants. According to Friends of the Woodland Park Zoo, “[the elephants] are deprived of the ability to engage in natural elephant behaviors. They have no access to a living tree in their yard.”

The Woodland Park Zoo’s current five year plan does not include any changes to the enclosure, but hope to add more elephants and continue breeding. 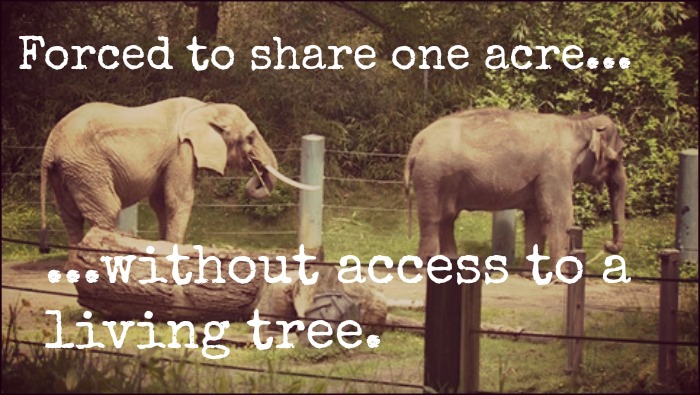 After spending their entire lives living in the Woodland Park Zoo, Bamboo and Chai deserve to be retired to a sanctuary that can more adequately meet their needs. The climate in Seattle is hardly appropriate for an elephant who thrives in a warm environment. Both Bamboo and Chai exhibit stereotypic behavior and posses joint and foot problems that lead to the untimely death of Watoto.

A survey done by Friends of the Woodland Park Zoo showed that 66 percent of Seattleites believe that people can learn about elephants and their conservation from a non-live elephant exhibit. In addition, studies have disproven the claim that zoos help to educate children about wild animals. Seeing the trauma that these elephants have suffered during their time at Woodland Park Zoo, in one form or another, is a clear indication that something needs to change. The Toronto Zoo retired their elephants to PAWS Sanctuary in California, and it is time that Woodland Park Zoo considered doing the same.

What You Can and MUST Do to End the Suffering

After reading this, we’re sure a Green Monster such as yourself is pretty upset about what you’ve learned. So were we! The good news is you have the power to help bring about an end to this senseless suffering by refusing to buy a ticket or a membership to the Woodland Park Zoo.

With their centennial celebration happening this year, there’s no better time to tell the zoo that you don’t support their practices than by refusing to buy a ticket or membership. Zoos are for profit organizations and rely on ticket sales for the vast majority of their income. Without patrons, they can not continue to operate.

Leave a Review on Trip Advisor and Other Sites

While your individual decision not to patronize the Woodland Park Zoo will make an impact, you can magnify that impact by spreading the word if you have first hand experience with visiting this zoo.

Share this post in the review section of the Woodland Park Zoo’s page on Tripadvisor to advise others against checking this attraction out if they’ll be spending time in the area. Nationally, 26 zoos have discontinued their elephant exhibits, with the most recent being the Toronto Zoo after a successful campaign launched by Green Monsters like you saw their IDA rating and decided to do something about it. Raising awareness makes a difference!