EXCLUSIVE: Self-Mutilation by a Young Whale at Vancouver Aquarium

A young whale has been observed with wounds attributed to the behavior of self-mutilation. Whale biologist Dr. Ingrid Visser, Founder of and Principal Scientist for the Orca Research Trust, recently observed the individual, known as Chester, and documented a wound on his chin from this behavior. Chester, a false killer whale, currently resides in a tank at Vancouver Aquarium in Canada.

Despite Visser’s observations and photographic evidence, Dr. Robin Baird, a false killer whale researcher and Research Biologist with the Cascadia Research Collective, has countered Visser’s concern for Chester’s well-being, maintaining that the false killer whale is simply young and clumsy. In an interview with One Green Planet, Baird stated, “What I saw in the photos was an abrasion on Chester’s lower jaw and I would call it a minor abrasion. I personally wouldn’t call it self-mutilation. He’s a year-old whale who was separated from his mother when he was a few weeks old and it is hard not to imagine that an animal in that situation is not going to be having a hard time adjusting to his new circumstances.”

He went on to say, “I think [Chester is] probably lonely, he’s also growing up at the same time and he’s exploring things in his new pool. It’s not surprising to me that he might interact with and rub up against things. The question is how you interpret why he is doing it. Is it because he is neurotic about being in captivity and self-mutilating or is it because he was separated from his mom at only a few weeks old and is still effectively an infant at this stage?” 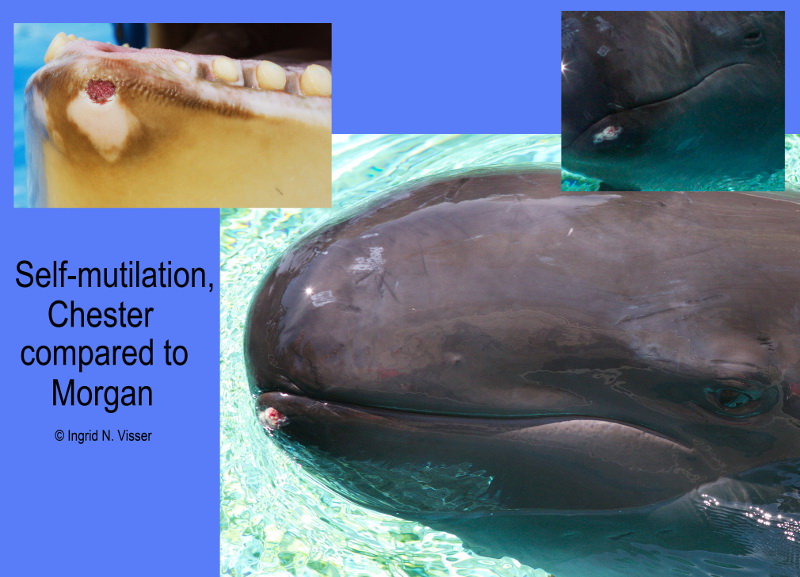 Vancouver Aquarium’s Communications Advisor, Deana Lancaster, responded to an email requesting information about Chester’s welfare and his wound. She stated there was “no one available to provide answers.” Coincidentally, within 24 hours of the email, Vancouver Aquarium published this blog in an apparent attempt to deflect the questions posed to them. Within the blog, the aquarium’s own veterinarian, Dr. Martin Haulena has now admitted that Chester has been exhibiting “attention-seeking” behavior, which resulted in the abrasion.

A Consequence of Captivity

Chester was reportedly deemed un-releasable by a panel of experts convened by the Canadian government’s Department of Fisheries and Oceans, although evidence now suggests the decision to keep Chester permanently in captivity was made prior to the panel being formed. Nevertheless, this panel also advised that Chester be housed with members of his own species as false killer whales are known to form strong, long-term social bonds. However, there are currently no other false killer whales in captivity on the North American continent. Despite this recommendation, Chester is instead kept in a tank with a Pacific white-sided dolphin known as Helen. Vancouver Aquarium purchased Helen from Enoshima Aquarium in Japan. Together, Chester and Helen perform daily shows for the paying public.

Visser explains that the decision to keep Chester in a concrete tank comes at a high cost for his quality of life and therefore his welfare. “I’ve spent many hours observing cetaceans [whales, dolphins and porpoises] in the wild and in captivity, but it is only in captivity that you see abnormal, repetitive behaviors, which are termed stereotypies.” She stated, “The animals’ biological needs are compromised and they cope with this in different ways. Some chew on concrete and in Chester’s case he has been banging his chin, apparently on a window. These stereotypic behaviors can lead to self-mutilation.”

Self-mutilation is a term that describes self-inflicted physical harm and is a subcategory of stereotypy, although there does not seem to be any one accepted definition. The emphasis for self-mutilation behavior doesn’t appear to be so much on why an animal performs a behavior or what the behavior is exactly, just that the behavior is born out of frustrated needs, that it is a typically repetitive behavior without apparent real function and that it causes the animal physical harm. Chester’s “attention-seeking” behavior seems to fit this description at least in part, as it appears to result from frustrated needs. It is, however, unclear in this instance whether the behavior is repetitive and neurotic.

In addition to cetaceans, self-mutilation has also been observed in captive birds, turtles and primates, as well as humans and domestic horses, just to name a few species. Depending on the species, self-mutilation can manifest in different behaviors, including feather-plucking, head-banging, rubbing, concrete chewing and bar biting.

“This type of behavior has been well documented in a variety of captive and domesticated animals and it typically escalates until you see wounds such as the ones I’ve photographed,” Visser states, explaining she has photographed self-mutilation in various individuals, including a young female orca known as Morgan. Like Chester, Morgan was also rescued and is now displayed permanently in captivity, but in her case at Loro Parque, Spain. Describing Morgan’s self-mutilation behavior, Visser says, “Morgan chews on concrete so frequently she has worn some of her teeth right down to the gums and she bangs her chin, which often causes the skin to rip resulting in open wounds. This has happened so many times that she has now damaged the tissue permanently; in photos this is seen as a darker area on the white pigment.  It isn’t possible to see if Chester has similar damage because of the already dark pigment on his chin.” 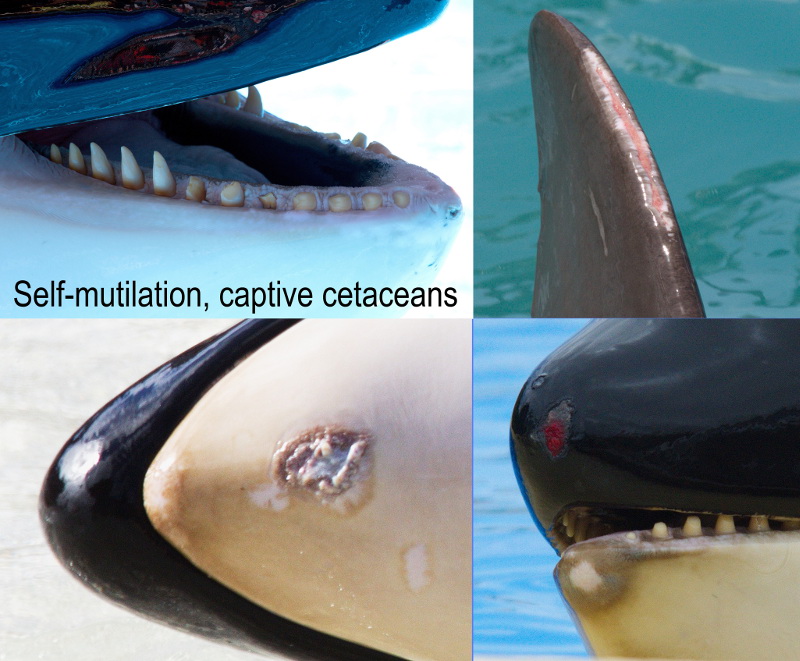 Referring to orcas, Baird agrees it is “pretty much impossible”  to recreate the environment that such a complex social and wide-ranging species needs to thrive. The expert panel assessing Chester’s long-term fate have also identified that false killer whales have similarly complex needs, as exhibited in their recommendations for Chester’s long-term housing.

The Line Between Rescue and Captivity

Visser goes on to say, “I’m finding it harder and harder to continue to think of these ‘rescues’ as rescues. I think we have to be more realistic and refer to them as ‘salvages’. A true rescue would see the animals returned to the wild, whilst a ‘salvage’ takes something that is saved from destruction and puts it to further use. In these cases, both Chester and Morgan are used in commercial shows for the paying public to see. They are now being used in wet circuses and that is not a rescue.”

Stephen Marsh, Operations Manager for British Divers Marine Life Rescue, says, “A growing mass of people are sceptical about the real intentions of dolphinaria purporting to run whale and dolphin rescue and rehabilitation programmes. There’s a very real conflict of interest here as the rescue of whales and dolphins by the captivity industry may be for reasons other than the well-being of the individual animal.”

Concerns about the welfare of a cetacean don’t go away just because the animal is rescued. Such individuals are still able to suffer in the same ways as other individuals do in a captive environment when their physical and social needs are not met. Visser has been a long-time supporter of “cetacean sanctuaries” comprised of sea pens and netted off bays as an alternative for rescued cetaceans. She says, “We put a man on the moon, so surely we can build a facility that would cater better to the basic needs of these animals. One that would treat them with the dignity and respect they deserve instead of exploiting them because they were in need of help”.