On the night of June 8, a semi-trailer truck crashed through a guardrail and tumbled down a ravine near Xenia, Ohio. On board the trailer were 2,200 piglets.

Between 300 and 400 of the piglets were killed on impact or so badly injured that they later had to be humanely euthanized by responders. Approximately 1,500 of the survivors were quickly captured and brought to a nearby fairground to be held until a second truck arrived the next morning to bring them to their original destination. That left an unknown number of piglets loose somewhere in the surrounding woods.

Farm Sanctuary was alerted to the accident the night it happened. National Farm Animal Placement Coordinator Alicia Pell immediately began contacting local authorities for information and to offer Farm Sanctuary’s help. She eventually learned that no one had kept an accurate count of the fatalities or of the live piglets who had been picked up by the trucking company. This meant no one knew how many piglets had disappeared into the woods. One estimate by local authorities put the number at 200.

The Ohio Department of Natural Resources (OHDNR) took charge of the search. The trucking company had relinquished custody of any remaining piglets after it picked up those at the fairground, counting the missing ones as an economic loss. The OHDNR informed us that any survivors would be free to go to sanctuary. With that assurance, we mobilized a rescue team.

The team arrived in Ohio the second morning after the crash. Five staff members had driven from our New York Shelter with a trailer, traveling all night to arrive as soon as possible; meanwhile, Alicia and a staff member from the Southern California shelter had flown in from the L.A. area. The team spent the next two days searching in coordination with the OHDNR and a number of volunteers who showed up to help.

After two days of searching, the rescue team had found no piglets. The search area was vast, and the forest was dense with undergrowth. Searchers could have walked within a few feet of a piglet and not seen him or her. Nonetheless, we concluded that the guess of 200 loose piglets was likely incorrect; the OHDNR estimates that there might be a dozen at most. We also concluded that the only effective way to find any survivors would be through a comprehensive search similar to the kind mobilized for human children missing in the woods, with dozens or more people combing the search area simultaneously. The authorities would not or could not launch such a search with their own manpower and would not allow such large numbers of volunteers into the area.

Considering the hopeless odds of success, our team regretfully decided to depart so that staff could return to their duties at our shelters. We have the OHDNR’s assurance that they will call us if any piglets are found, and Alicia has been in contact with the agency almost daily since the crash. There have been some reported piglet sightings but no confirmed appearances.

The Life and Death of an Industry Pig

The piglets in that overturned trailer were on their way from a nursery to a finishing farm, the penultimate stop on the short but harrowing journey of a pig raised for meat.

In the pork industry, a pig’s life begins at a breeding/gestation facility, where sows are confined in gestation crates barely larger than their bodies as they endure a grueling cycle of insemination and pregnancy. Moved to equally cramped farrowing crates just before delivery, sows give birth to litters of 8 to 20 piglets, who are immediately shifted to an adjacent pen to nurse from their mother through the bars of the crate. Practically immobilized, the sow is unable to provide the affection and care that she longs to give her piglets. 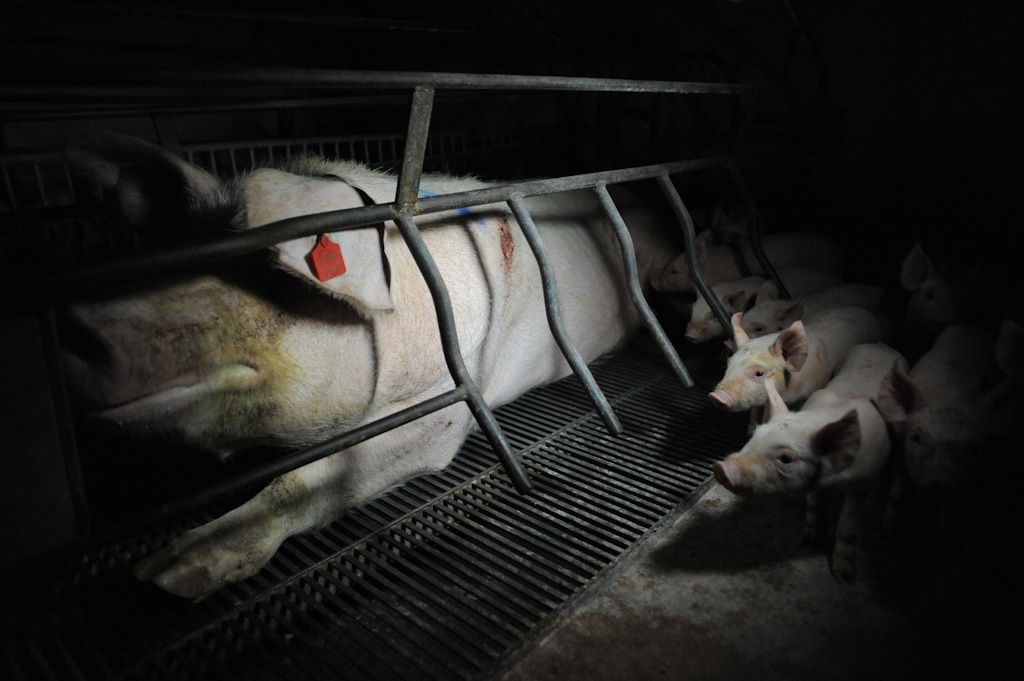 After two to three weeks of nursing, the piglets are moved to a nursing barn, which may be at the same facility or at a different one. They live in this building for another four to eight weeks, denied access to the outdoors as well as bedding or anything to occupy their sharp minds. They do have a little space to move around, a small luxury soon to be revoked.

After the nursery, piglets are moved to a growing/finishing operation, which may be hundreds of miles away. Here they are kept until they are five to six months old, growing rapidly. They are allotted about eight square feet of floor space each in shared pens, and as they grow bigger, their pens become increasingly cramped. For these highly intelligent, sensitive, and social animals, the stress and monotony of intense confinement are literally maddening. 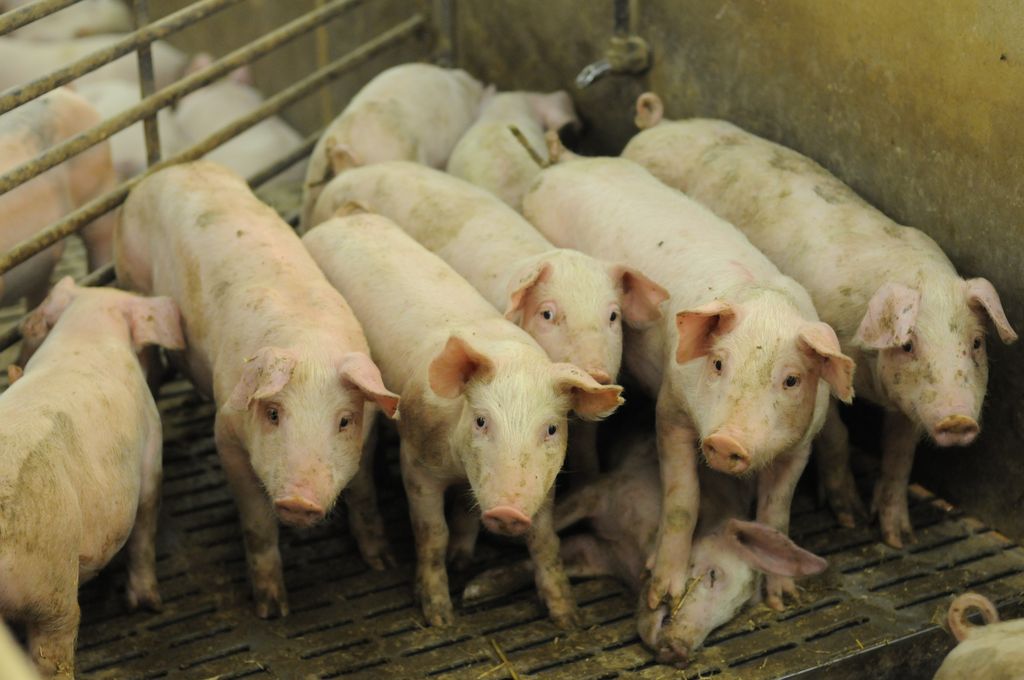 When the pigs have reached a market weight of 250 to 275 pounds, they are considered “finished” and endure another transport: to the slaughterhouse, where they have been preceded by gestation sows who are “spent” after three to five litters, who have failed to breed during their first estrous, or who have produced small litters.

Learn more about the lives of gestation sows and pig intelligence.

With the suffering of pigs and other farm animals largely hidden from view in giant industrial buildings, transport incidents are some of the very few occasions when factory farm animals are seen by the public. As dreadful as these accidents are, they have allowed us to rescue animals who would otherwise have been slaughtered within a few days or months.

Among the many animals we have welcomed to our shelters in the wake of transport accidents are the 60 chickens who fell out of a transport truck headed to a Brooklyn live market this Memorial Day and the 87 chickens who survived a similar accident on the Staten Island Expressway last year.

Then there’s Jay, burned horribly when a transport truck carrying him and more than 30 other cattle to slaughter crashed into another vehicle and burst into flames.

The Toll of Transport

A Farm Sanctuary investigation of media reports between 2000 and 2006 concluded that tens of thousands (perhaps hundreds of thousands) of farm animals are killed by transport accidents yearly. This estimate was based on a limited sample since not all accidents are reported in the media. No precise numbers could be found because no federal agency or industry group tracks this information.

Additionally, no federal or state agency places limits on how densely farm animals may be loaded in transport vehicles or requires any special training or certification for those who transport them. In the absence of regulations, the industry defaults to its modus operandi: more, bigger, denser, faster. Dozens or even hundreds of animals are packed onto trailers with no regard for their safety. Boxes of cereal are shipped with greater care.

The toll of these transports goes beyond roadway accidents. Under federal regulations, farm animals may be transported for up to 28 consecutive hours without being offloaded to eat and drink, and a number of loopholes can push that limit to 36 hours or beyond (the rule also excludes poultry animals, who have no legal protections at all during transport). Lacking any kind of climate control, the trailers expose their passengers to extreme heat or cold. To make matters worse, many animals begin transport already weak and sick from their months or years in production. The effects of transport listed by the U.N.’s Food and Agriculture Organization (FAO) include stress, heat stroke, dehydration, bloat, trampling, suffocation, and heart failure. Even excluding accidents, transport is responsible for a significant number of industry deaths before reaching a commercial processing plant. Pig processors alone anticipate a one percent loss for each transport according to a 2009 Iowa State University study of 2 million pigs. For every truckload of 2,000 pigs shipped to slaughter, agribusinesses accept that 20 won’t survive the journey. It’s the cost of doing business.

The reason that hundreds of pigs died in Xenia is that there were more than 2,000 pigs in the trailer. The scale of mortality in these accidents reflects the scale of the animal agriculture industry and each of its components. Animals are raised, transported, and slaughtered by the thousands in the name of efficiency.

Ostensibly, these industry operations have become so massive in order to make use of “economies of scale,” cost advantages gleaned from exploiting animals in large numbers. Whatever economic advantages this model provides, it also guarantees tragedies of scale, from the hundreds of piglets killed in Xenia by a single transport accident to the millions of chickens purposefully suffocated to death in a single facility in Iowa this spring in attempt to stem the spread of avian influenza.

But the ultimate tragedy is not that so many suffer and die from the side effects of the system; it’s that so many suffer and die by design. Billions of animals are raised in torturous confinement and brutally slaughtered at a young age purposefully, to make money from consumers. The accident in Xenia is a mere glimpse of the staggering death toll exacted by the standard American diet and those who profit from it.

At this point, it is unlikely that any additional piglets from the accident will be found. We want to thank everyone who helped on the ground and everyone who reached out to express their support, sharing our hope and sadness for these young animals. Like the search for the Xenia piglets, the fight for farm animals can seem daunting. There’s such a large area to cover, such a dense tangle of economic and political interests to impede our progress. But in this larger effort, there are no limits on the number of people who can join and help. Friends, your hope is strong, and so are your voices. Together, we can end the larger tragedy.

Thanks to our generous supporters, we have been able to respond to so many rescues over the years and rescue and rehome thousands. If you aren’t already a member of Farm Sanctuary, won’t you consider joining so you can be part of this amazing community of compassion? A compassionate world begins with you.