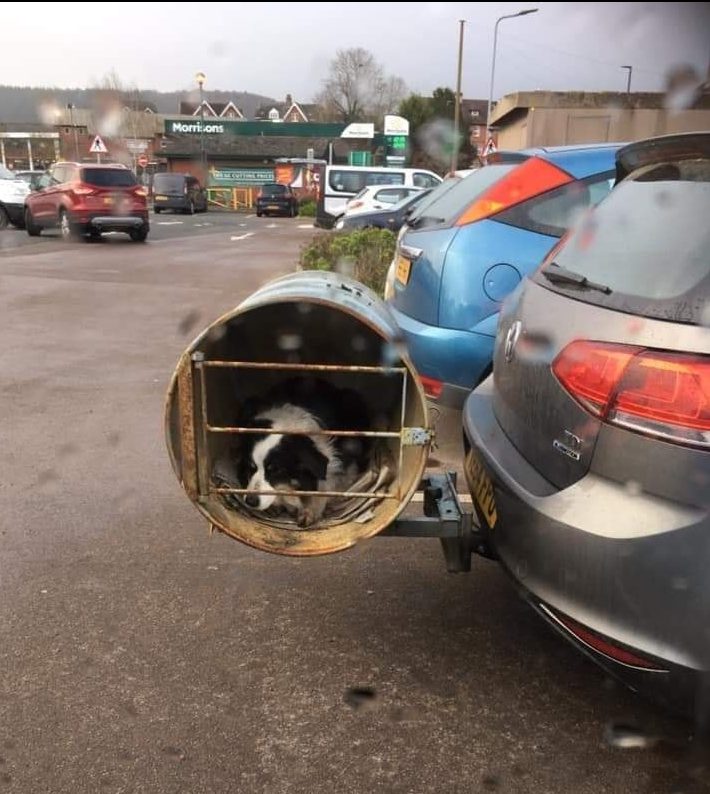 Anti-hunting group in the U.K., Severn Vale Hunt Saboteurs usually posts about hunts in the U.K. as part of their activism against the horrible “sport.” But recently, they had to deviate from their usual topic because they couldn’t believe what they saw when they were sent a certain image. A border collie is seen in a metal barrel attached to the back of the car as his mode of transportation.

The photo is distressing as one’s first thought when seeing the photo is that if there were to be a car accident and the car was hit from behind, the dog would suffer unimaginable pain and likely death. The dog is in grave danger while in the barrel.

Other people were understandably concerned that the dog could be killed by the fumes from the car. The barrel places the dog directly where the fumes are released.

What’s worse though, is that people who saw the photo are sharing their photos and saying that they’ve seen the car with the dog in the barrel in the summer, last year, and as far as 6 years ago!

That this dog or many dogs are transported in this way by this same person is not acceptable. West Mercia Police said: “We aware of an incident recently of a dog being transported dangerously and photographed in [UK supermarket] Morrisons Ross car park.” Police in the corresponding area are investigating.

But if you have any information, please contact the police. You can help solve this case of animal abuse! According to West Mercia Police, a follow-up request was sent to Thames Valley or Hertfordshire Police. People in Herefordshire and Gloucestershire may particularly be of help!