Despite Their Misfortunes, Two Orphaned Rhinos Form a Strong Bond in India 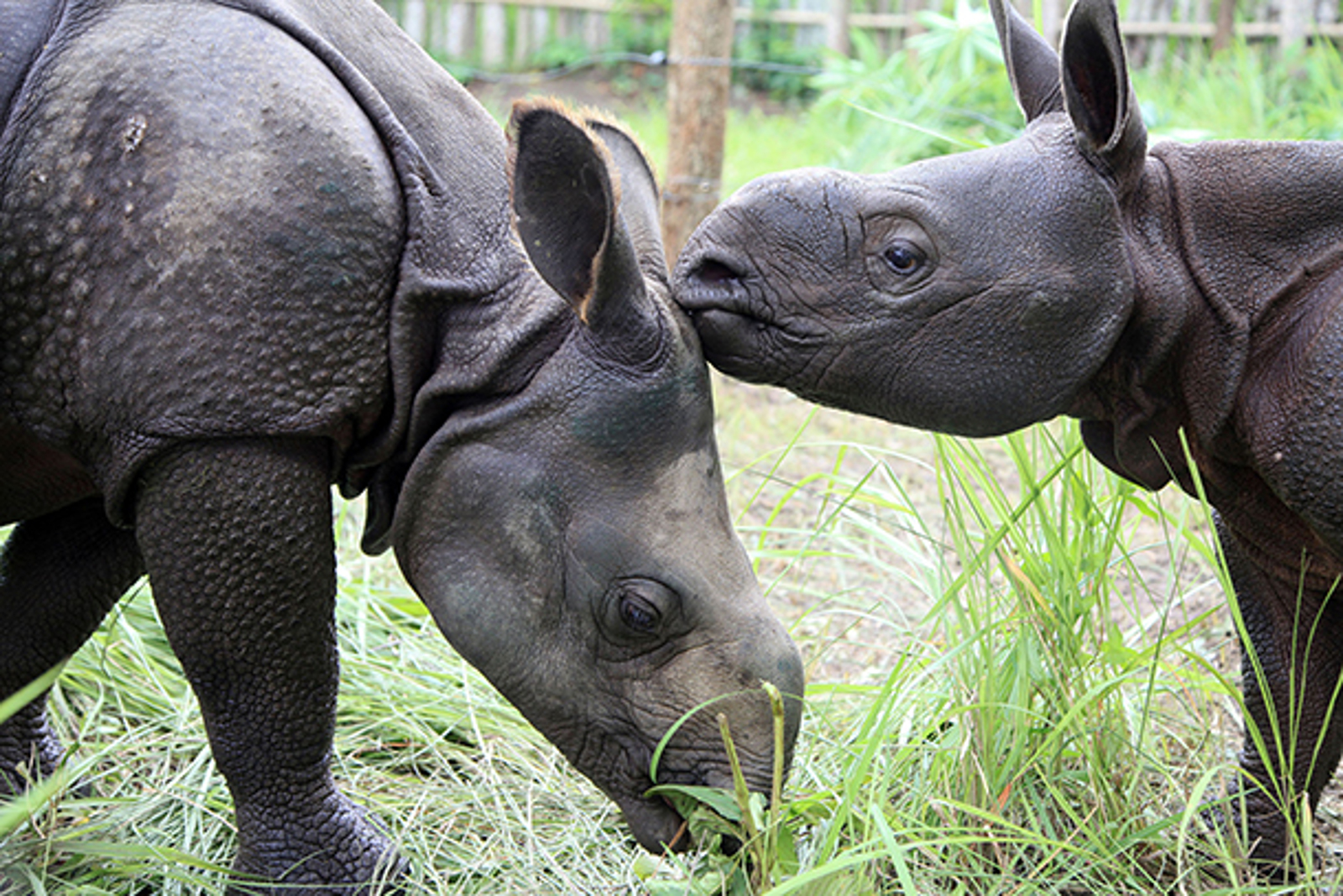 Two years ago, on the eve of Bihu (a festival of harvest and New Year for the people of Assam) in April, the International Fund for Animal Welfare (IFAW) and Wildlife Trust of India (WTI) team in Greater Manas received some miserable news.

An adult female, a new mother, was brutally killed in Manas National Park and her horn was stolen. Her young calf, less than a month-old male, was left orphaned.

Along with the Forest Department, the IFAW-WTI team located the calf near its mother’s carcass. Dehydrated and clearly stressed, the calf did not leave its mother’s side, seemingly trying to seek reassurance from the carcass.

The calf was taken in for hand-rearing and care by IFAW-WTI team. He was named Dwimalu, after an ancient Bodo mythological figure. He was kept in an enclosure in Rhino Camp and looked after day in and out by our animal keepers. 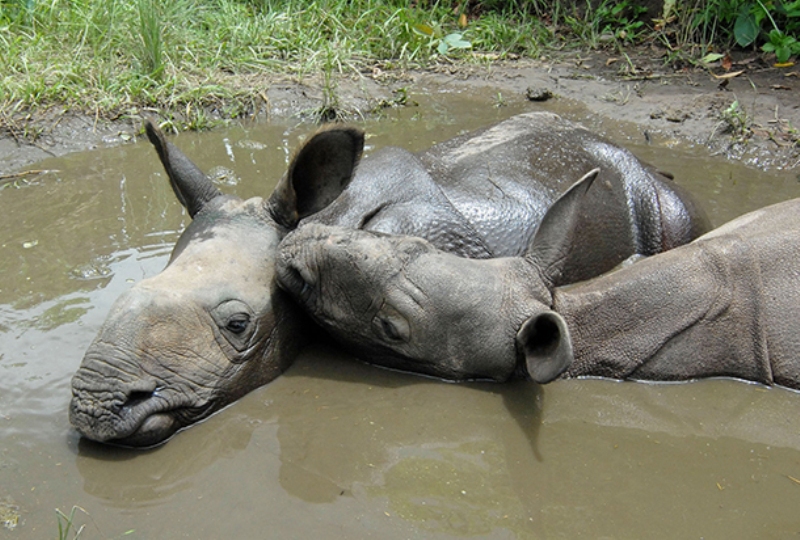 He was successfully revived, but the team felt that he would do well with the company of another of his kind, rather than spend time only with humans.

Purabi was rescued from Kaziranga National Park three months after Dwimalu. She was separated from her mother during the annual floods. As her mother could not be traced, she was admitted to the IFAW-WTI run Wildlife Rescue Center near Kaziranga for hand-rearing.

As with the rhinos, previously hand-reared at the Center, Purabi was to be moved to Manas eventually for release, as part of our initiatives to revive Manas. Generally, the rhinos are raised to young adulthood when moved to Manas under this initiative. But for the plight of Dwimalu, Purabi was moved rather early. Purabi and Dwimalu have been together ever since. 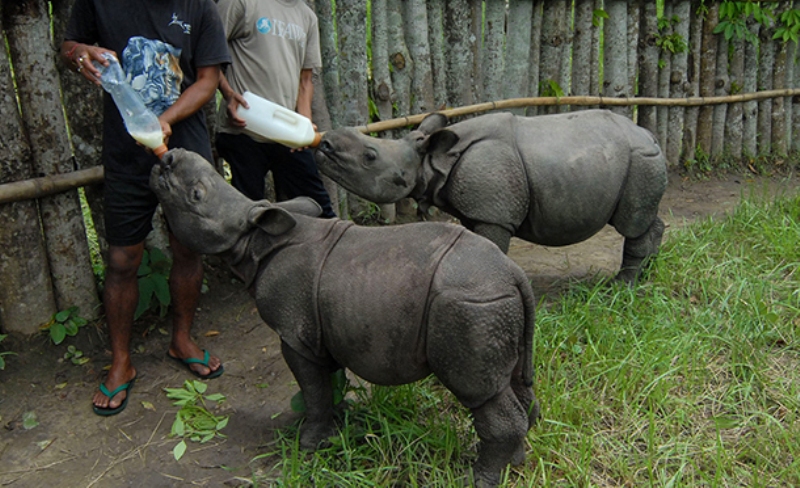 Our animal keepers Rohan Goyari and Maheshwar “Ontai” Basumatary (who was recently awarded for wildlife service) are looking after the orphaned calves. They see the growing bond between the two calves, and say it reminds them of two former calves – Ganga and Jamuna, both of whom gave birth last year and were hand-reared and rehabilitated by our team in Manas.

“Animals often fight for territory, or for dominance over others. But Dwimalu and Purabi are calm and composed. They seem to have accepted the misfortunes of losing their mothers. Purabi is a year older than Dwimalu and is protective towards him. The two kids are quite fond of each other’s company,” Ontai says. 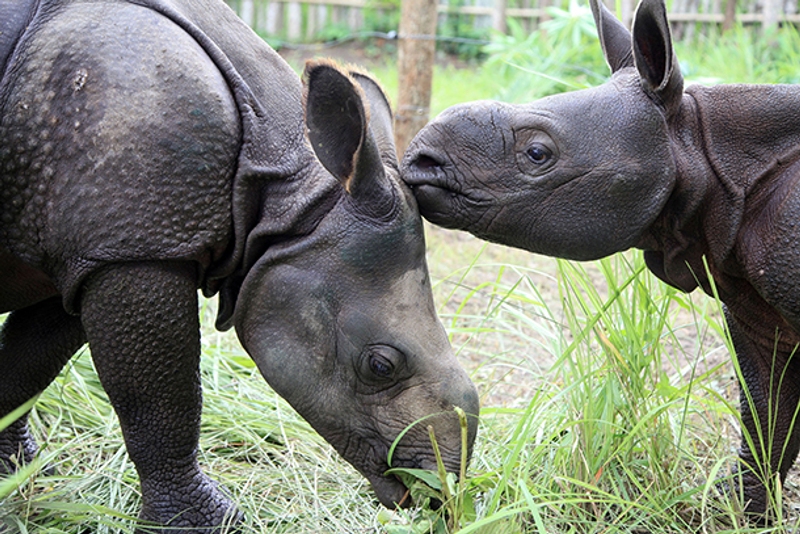 Like other rhinos rehabilitated by our team, these two will eventually be moved into the boma – a temporary spacious enclosure for in situ acclimatization. And then, like others, they will be returned to the wild, to carry on their mothers’ legacies, and to ensure survival of their kind.