5 Cruel Things Done to Wild Animals to ‘Domesticate’ Them 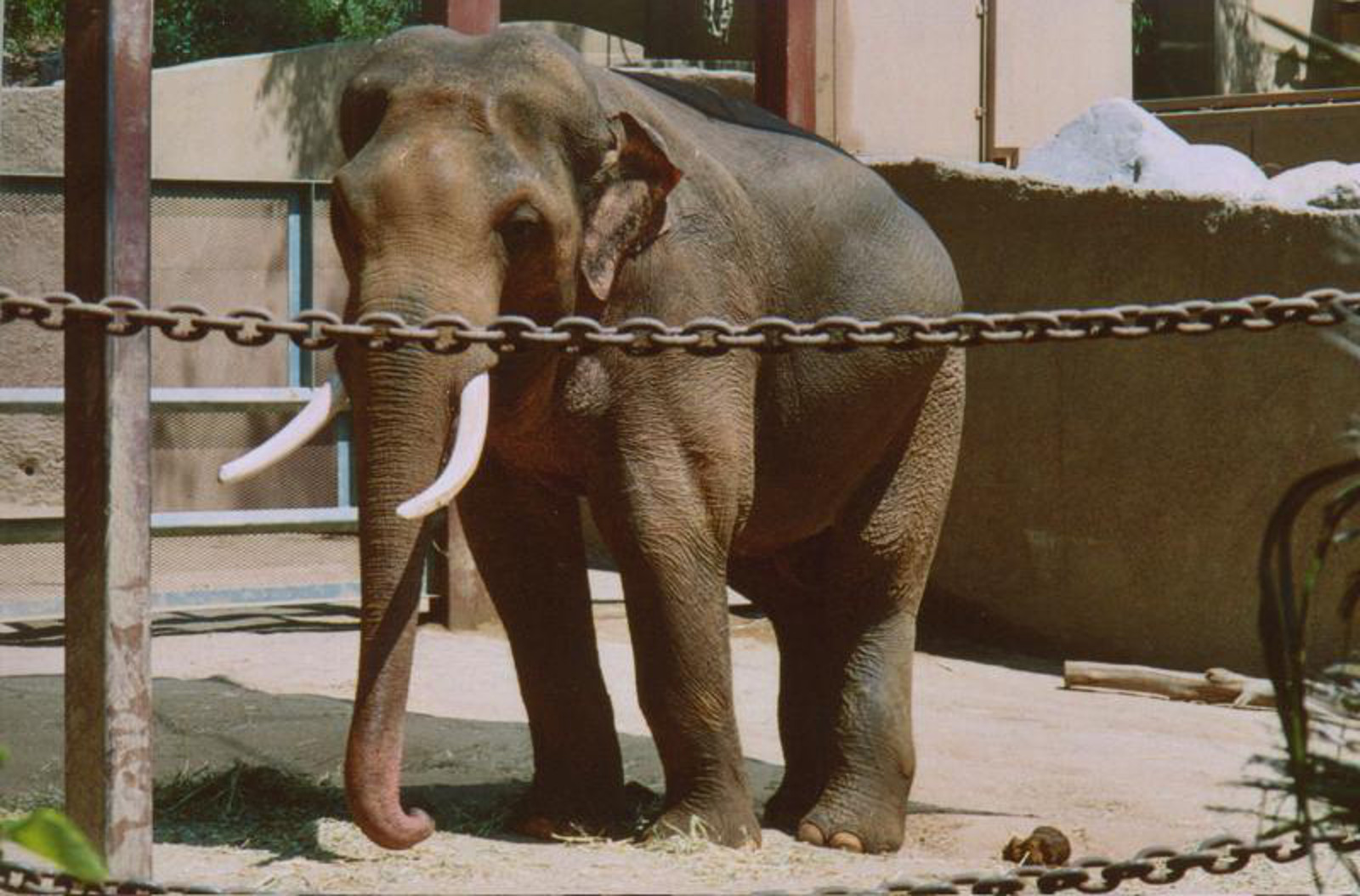 Domestication is not simply cut and dry. The process for some species has taken thousands of years, for others, humans have been able to accelerate the process for viable candidates.

It is a common misconception that when a species becomes “domesticated,” it loses all of its natural instincts or their predatory impulses; this is not the case. Instead, it means that the animals have undergone a number of physiological, morphological and behavioral changes.

When we encounter wild animals in captivity, whether at zoos roadside zoos circuses or aquariums, the term domestication is often used without hesitation. This is incredibly misleading to the public as they assume that the animals in captivity have undergone a process similar to the truly domesticated dogs and cats that we share our homes with, and in so doing, it creates the illusion that these wild animals are in some way content and or complicit in interacting with humans and performing tricks.

These captive wild animals, however, have only been “tamed,” through a number of industry “methods” – which can include beating, drugging, starving and traumatizing the animals into submission. Here are a few examples of how this is done: 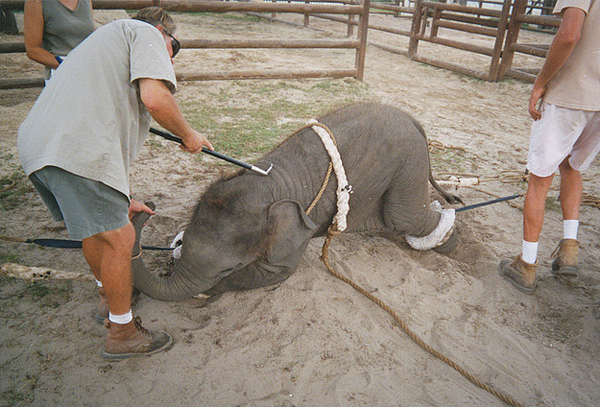 Perhaps the most notorious tool used to aid in controlling a wild animal is the bullhook. Capable of inflicting bodily harm and instilling fear, the bullhook is used to remind the animal who is in charge and the repercussions of not cooperating.

Undercover footage has shown the level of abuse caused by those wielding bullhooks behind the scenes. By digging the sharp end of the hook into the most vulnerable areas of the animal’s skin, trainers teach them to associate certain “undesirable” behaviors with pain in order to get them to do what they want.

Elephants are incredibly intelligent and most learn to perform certain behaviors just by the mere sight of the bullhook – because they know if they don’t, they’ll be punished.

Captivity not only causes physical pain for animals but it almost always results in mental distress as well. Many captive animals demonstrate stereotypic behaviors, or mindless, sometimes violent actions, that are an outward symptom of deep depression, anxiety or frustration. This often results from being deprived of the ability to perform natural behaviors or socialize.

Drugs (Xanax, Zoloft, Paxil, Klonopin, Valium, etc) to combat anxiety, depression and behaviors associated with stereotypic behavior have been used on dolphins, whales, gorillas, lions, tigers, and a host of other animals in captivity to make them appear docile in front of guests.

Photo ops with wild animals are all the rage. (We all remember the tinder trend, right?) Establishments that feature these sort of interactions insist the animals are docile and sociable because they were “hand raised.” But, what many tourists don’t realize is tigers generally don’t simply sit still and lie down allowing dozens of strangers to pose with them daily.

After all, they still possess their wild instincts because they haven’t really been domesticated.

Rather, many of the facilities have been known to give their animals mild sedatives and play off the animals lethargy with the excuse that “they’ve just had a large meal.” We can attest to the power of the food coma … but this is a little ridiculous, no?

Visitors are often told that animals are “trained” using operant conditioning, in which positive reinforcement is valued. That is, when the animal does something right, it’s given a reward to reinforce that behavior and in many cases that reward is food.

Most establishments maintain they would never withhold food from an animals, and in some cases that may be true, but most animal attractions that seek to profit from their animals’ performance will only feed animals when they are performing.

John Hargrove writes of his experience in Beneath the Surface,  stating: “Because such a form of ‘behavior modification’ would sound barbarous to human audiences, the practice has been kept secret. It would not be good for business to say that the stars of the show were not given food in order to make them perform. But it has happened. I have been part of inflicting the policy myself at the request of a supervisor.”

The reality is, this happens all too often. 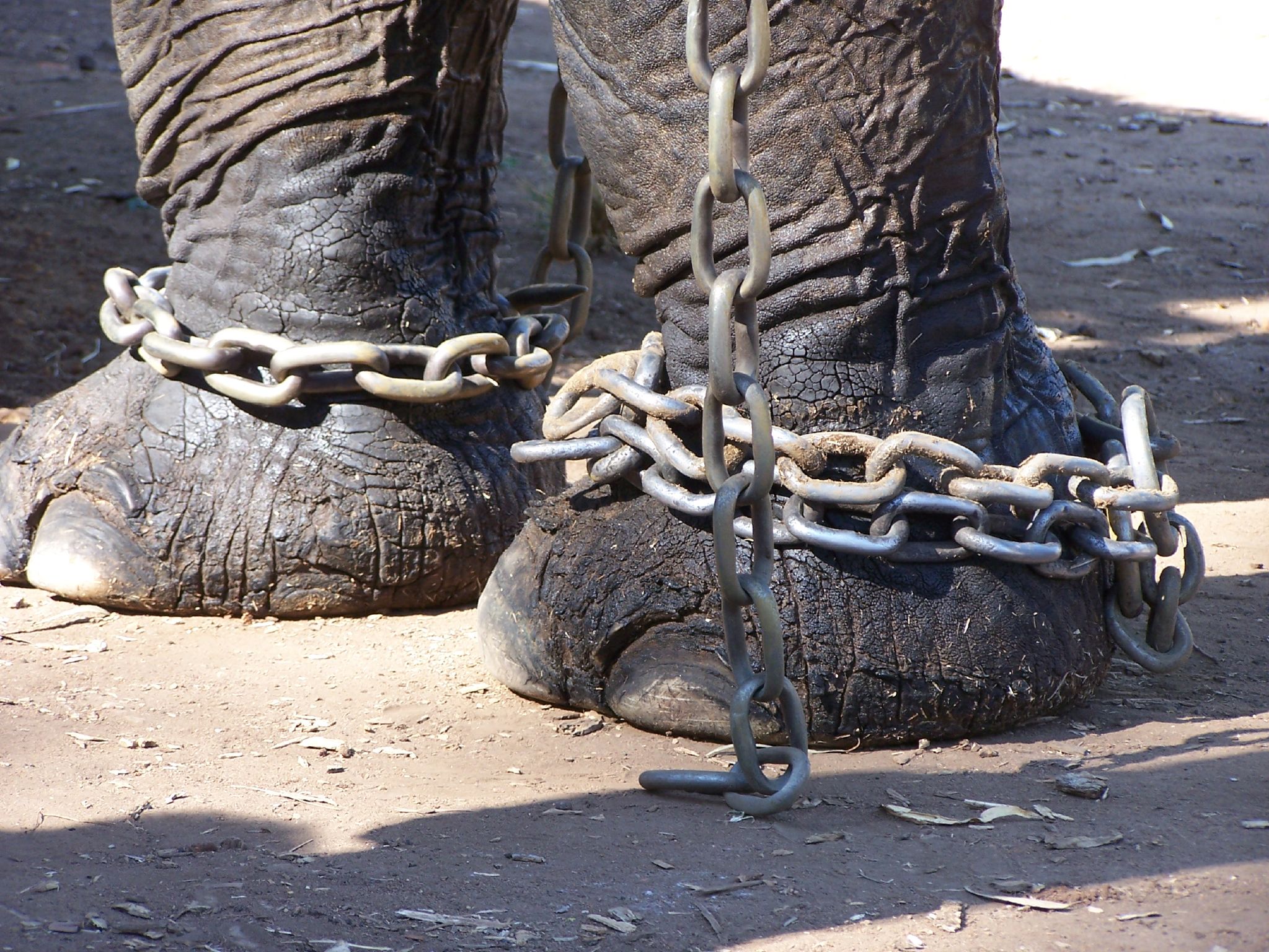 Chains and ropes are just another physical reminder to the animals that they are never truly free. Elephants used in animal attractions are often tied up for hours to keep them from wandering or misbehaving, often the chains and ropes are kept so tight they cut into the flesh of the animal. An investigation into Ringling Brothers circus found that young elephants who were in the process of being “broken” of their will as part of training were forced to spend 23 hours a day standing up in chains.

As Green Monsters, it is up to us to voice the truth for the many captive animals who are being falsely held under the guise of “domestication.” The good news is there are many things we can all do to do this, here are a few ideas to start:

Above all, it is imperative that you share what you’ve learned with others and inspire them to act as well. Together we can make real change for these animals, but it all starts with your own actions!