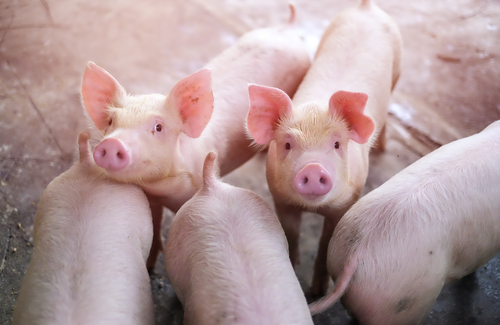 Chinese media reports said that an 165 pound pig was tied up in the bungee harness and then pushed off a platform that was 70 meters (230 feet) high. While social media users in China called the stunt, “not funny at all,” the owner of the theme park stood behind the stunt.

The owner of the Meixin Red Wine Town theme park, near Chongqing, said of the animal being dropped, “We let the pig make the first jump because pork prices have been very high this year and recently they dropped a bit.” He also added that China was finishing celebrations of the Year of The Pig.  China is known for its lack of animal rights, as it has no laws or customs to oppose harsh animal treatment.

Animal activist Jiang Hong told the Global Times of the stunt, “Forcing a pig to do this just for fun seriously violates our basic respect for life.” See a video of the stunt:

Sign this petition calling for the park to be shut down.

Pigs in China have been part of a swine flu epidemic the past few months that killed millions of pigs. Read more on China and animal rights in One Green Planet, check out these articles: