Have We Learned Our Lesson About Orca Captivity Since First Capture in 1964? 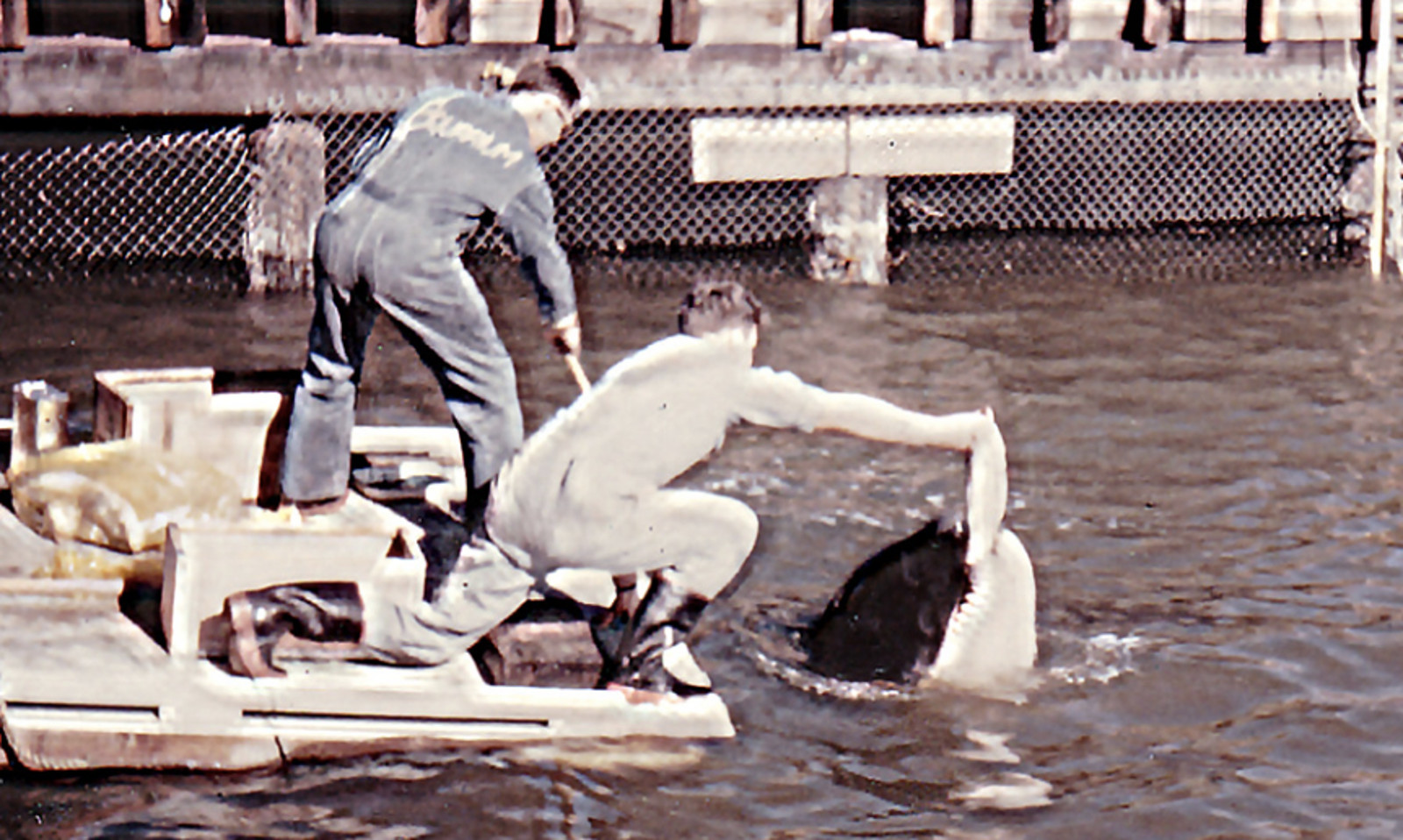 Orcas (also known as killer whales) are, without a doubt, one of the most majestic species on our planet. The brain of an orca is over four times larger than that of a human, while the brain lobes that deal with the processing of complex emotions are also significantly bigger. Orcas have been evolving for millions of years, while modern-day humans only emerged about 200,000 years ago. These animals naturally live in closely bonded matriarchal pods, remaining close to their immediate family members all their lives. They are renowned for their great intelligence and sensitivity, as demonstrated by the touching story of a disabled pod member who was cared for by his relatives.

They are one of the most widely ranging mammals on the planet, traveling up to 100 miles a day through the open ocean. The average life expectancy of a wild orca is thirty years for males, and fifty years for females. However, they can live to be significantly older than that! “Granny,” the matriarch of J-Pod, was believed to be 103 years of age when she was spotted off the coast of Canada in 2014.

Sadly, we humans seem to have decided that it’s perfectly okay for us to confine these incredible animals in small tanks and force them to perform tricks for our amusement. A worldwide industry has been created that deals specifically with the enforced confinement of orcas, dolphins, and other marine animals … all for the sake of human entertainment.

Orcas who are held in captivity often exhibit stereotypic behaviors such as chewing at the walls or bars of their tanks, voluntarily beaching themselves, and engaging in unpredictable outbursts of aggression. Tragically, Brancheau is not the only orca trainer to have been killed while working with these animals. While there has never been a documented instance of an orca harming any human being in the wild, over 100 “incidents” between orcas and their trainers have been recorded  in SeaWorld’s parks alone. Orcas who have incompatible personalities – yet are forced to live in close confinement under highly stressful conditions – have also been known to injure or even kill one another. Captive orcas also commonly experience depression, collapsed dorsal fins (in males), and unusual illnesses and infections that are seldom seen in their wild counterparts.

The 2013 documentary “Blackfish” has been pivotal in changing how we view orcas and other marine animals. This documentary explored the death of SeaWorld Orlando trainer Dawn Brancheau at the hands of an orca named Tilikum, and in the process, exposed a number of underhand industry practices that left viewers outraged.

As a result, marine parks such as SeaWorld and Miami Seaquarium in the U.S., and Loro Parque in Spain, have come under fire in recent years for their treatment of captive orcas. With profit margins and audience numbers sliding downhill at a rapid pace, there are signs that the orca captivity model could be falling apart at the seams, but the industry is by no means giving up without a fight just yet.

When examining how the cetacean captivity industry has grown to be as large as it is today – and why damaging revelations about it have only recently come to light – it can be helpful to look back to where it all began. Captain Paul Watson, founder of marine conservation organization Sea Shepherd, recently shared a post on his Facebook page outlining the heartbreaking story of Moby Doll – the first live orca to be put on public display. Moby Doll’s capture in British Columbia, Canada, in 1964, led to the growth of the cetacean captivity industry … in addition to the counter-captivity movement that is now gaining momentum. Watson explained the connections thus: “The shooting and capture of Moby Doll in 1965 led directly to the capture of more whales in B.C. and Washington State waters. This led to the internment of Skana and it was both Moby Doll and Skana that caught the interest of a young Dr. Paul Spong who in 1974 approached Greenpeace to tackle the whales, which led to the first at-sea campaigns to oppose whaling in 1975.”

Watson was aiming to highlight a new book called “The Killer Whale Who Changed the World” by Mark Leiren-Young. In this book, Leiren-Young outlines how Moby Doll was supposed to be killed and put on display in the Vancouver Aquarium, at the behest of the Aquarium’s then director, Murray Newman. However, the harpoon-driven capture attempt failed to kill Moby Doll, so Newman instead decided to place him in a sea pen at Burrard Dry Docks. Moby Doll remained here for three months until his eventual death, attracting curious members of the public and becoming the focus of international attention.

This picture shows how drastically Moby Doll’s life changed following his capture: from roaming and hunting for food in the open ocean, to being fed dead fish in a human-created pen. 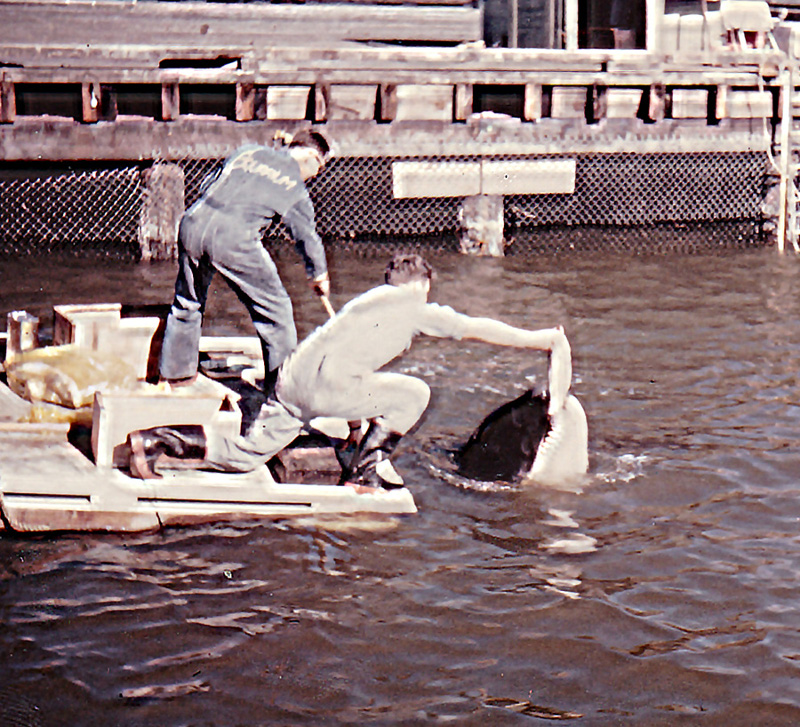 Moby Doll’s presence in Vancouver helped to shift the public’s perception of whales from that of terrifying, bloodthirsty monsters to the intelligent, feeling beings they truly are. Leiden-Young explained in an interview: “Moby was the paradigm shift. When Moby didn’t behave the way the media expected, everything shifted. … The night Moby was caught, the anchor on CBC News reported (the Aquarium had) ‘captured a monster.’ That was the word they used. And within the span of roughly 48 hours, when the whale didn’t do anything monstrous, the coverage completely shifted. From when Moby was called a monster to when Moby was called ‘Vancouver’s pet whale’ was just a  few days.” However, Moby Doll paid a terrible price for being the city’s “pet,” surviving for only three months after his traumatic capture.

For the sake of those orcas who continue to languish in captivity all over the world today, it is imperative that we empty those tanks for good, and retire the animals to sea pens – or, if possible, rehabilitate them for release back into the wild – where they will no longer be forced to exist as spectacles for the sake of human entertainment. To learn more about these animals’ plight, and how you can help, check out the articles below. “The Killer Whale Who Changed the World” is set to be released by Greystone Books on September 17. You can find out more here.