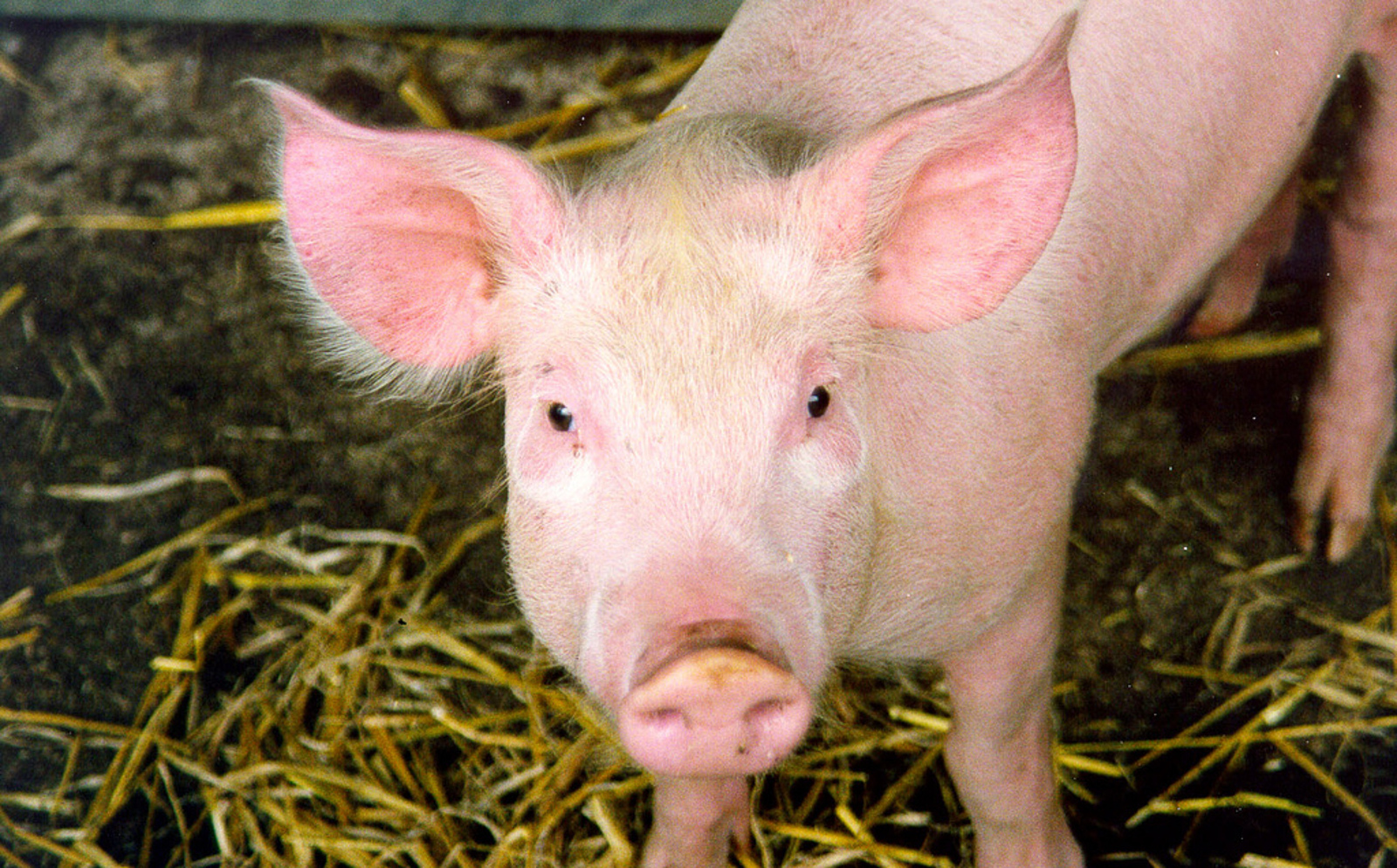 Legislation banning battery cages and gestation crates is starting to gain prominence in the United States and Canada. In Mexico, however, this sort of legislation does not yet exist. While many corporations that have agreed to phase out gestation crates and battery cages in the U.S. and Canada due to the rise of bans on cruel methods of confinement, these same corporations have refused to do so in Mexico, simply because it is not required.

Considering the fact that Mexico is the world’s largest consumer of eggs, the average Mexican consumer eats 50 pounds of eggs a year, and that Mexico ranks in the world’s top-ten pork producing countries, implementing a ban on these extremely cruel forms of animal enclosures could indefinitely improve the lives of millions of pigs and hens.

According to statistics provided by Elissa Lane deputy director of Humane Society International’s (HSI) Farm Animals program: There are more than 185 million egg-laying hens confined to battery cages in Mexico, and over 15 million pigs who are bred for slaughter; the majority of these pigs are sows confined in gestation crates.

Fortunately, this could all change thanks to the HSI’s celebrity supported campaign called “Dejalas Mover,” meaning “Let Them Move.” This ongoing campaign aims to bring awareness to the welfare issues facing hens and sows while encouraging Mexican consumers to oppose these cruel practices.

“HSI has been in Mexico for approximately four years now, and we’ve seen more and more attention brought to the conditions of animals in factory farms, as interest from media, local NGOs, the government, consumers, and food companies continues to rise,” Lane tells One Green Planet.”We decided to launch the Déjalas Mover campaign to bring even more attention to the cruelty of confining egg-laying hens and breeding sows in cages for the whole life, where they can barely move.”

So what is life like for hens and pigs in factory farms in Mexico?

The situation for hens raised on factory farms in Mexico is a lot like it is in the United States, the only difference is that cage-free egg producers do exist in Mexico. This means that all factory farmed hens are confined to battery cages.

Egg-laying hens spend their whole lives crammed in small wire battery cages. Up to 10 birds can be held in a single battery cage, and each is only allotted a space that is roughly the same size of an iPad. Living stacked by the thousands, these hens are subjected to endless stress and filth. Most will never get the chance to fully extend their wings or express any natural behaviors. Factory farm egg producers subject egg-laying hens to a process called “forced molting” where hens are left in the dark and starved to manipulate their natural egg-laying cycle. Around five to ten percent of egg-laying hens die during this process. Those who do survive only endure around two years of this living hell before egg production slows and they are ultimately sent to slaughter. 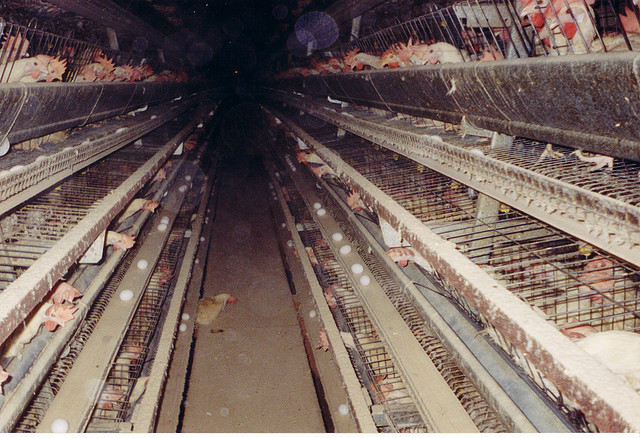 Small-scale pig farming used to dominate the Mexican pork market, however, within the past 20 years, large-scale factory farm systems have taken precedence. With this shift towards industrial animal agriculture, the use of gestation crates has increased pointedly in the country.

In Mexico, breeding sows on factory farms spend their entire lives in metal enclosures that are no larger than the animal’s body. A sow, living in a gestation crate cannot turn around or take more than a couple of steps forward or backward. She will live in this enclosure for the duration of her four-month pregnancy.

After the sow gives birth, she is transferred to a slightly large crate, called a “farrowing” crate. The sow will stay in the farrowing crate to nurse her piglets for up to 20 days, then she’ll be re-impregnated and put back in the gestation crate.

This cycle will be repeated for her entire life. Sows are robbed of their natural behaviors like foraging, grazing and socializing when they are stuck in gestation crates. This intensive confinement causes the sow to suffer from psychological stress as well as physical problems such as lameness, overgrown hooves, weakened bones and urinary infections. 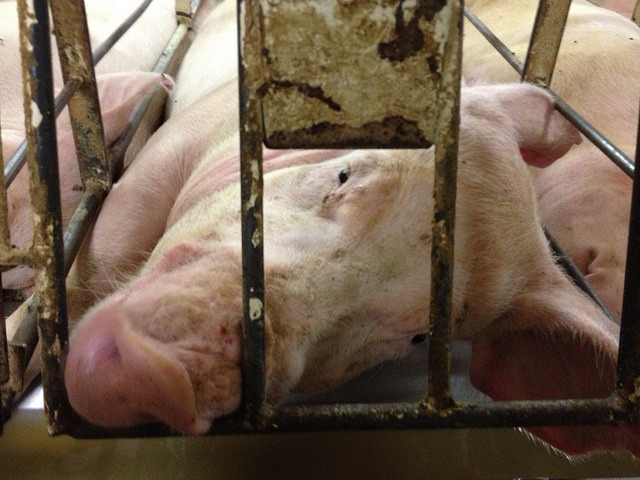 Mexico’s Farming Industry is Changing Thanks to Consumers

Public awareness about the ways animals are raised for food production is on the rise in Mexico. By empowering consumers and giving them the knowledge and an outlet to voice their concerns, the Dejalas Mover campaign, has seen a growing number of food companies and producers in the country listen to consumers and adopt more humane policies.

“Companies in Mexico are understanding that if they want to remain competitive and not risk ruining their image, they cannot support cruel confinement systems,” says Lane, “We will continue working with food companies and producers in the country until all cages and crates are gone.”

Already, some of the country’s leading companies have gone cage-free and crate-free. Last year, the largest McDonald’s franchisee in the world, Arcos Dorados, announced that their pork supplier in Latin America will convert crate-free housing systems. Mexico’s largest pork supplier, Granjas Carroll de Mexico, announced plans to phase out gestation crates by 2022. Additionally, Eurest, Mexico’s leading food service, and Hyatt Regency Mexico City have also committed to eliminating battery cages and gestation crates by 2017. Consumer demands are being heard and real change is coming about as a result.

While we would love to see a future where no animal is subjected the inherent cruelty of the animal agriculture system, this future is still far off in the distance. By first empowering consumers to look at the processes involved in making the food they buy, Dejalas Mover starts a conversation that is greatly needed in Mexico. Once people are cognizant of the cruelty behind the products they eat, they can choose to fight to improve animal welfare, and maybe one day remove themselves from this cruelty altogether by giving up meat and eggs. But it all has to start with awareness.

If you would like to join Humane Society International and many others in calling companies to “let hens and pigs move,” click here.