This Sweet Animal, Our Closest Living Sibling Species Will Disappear Forever if We Don’t Act NOW 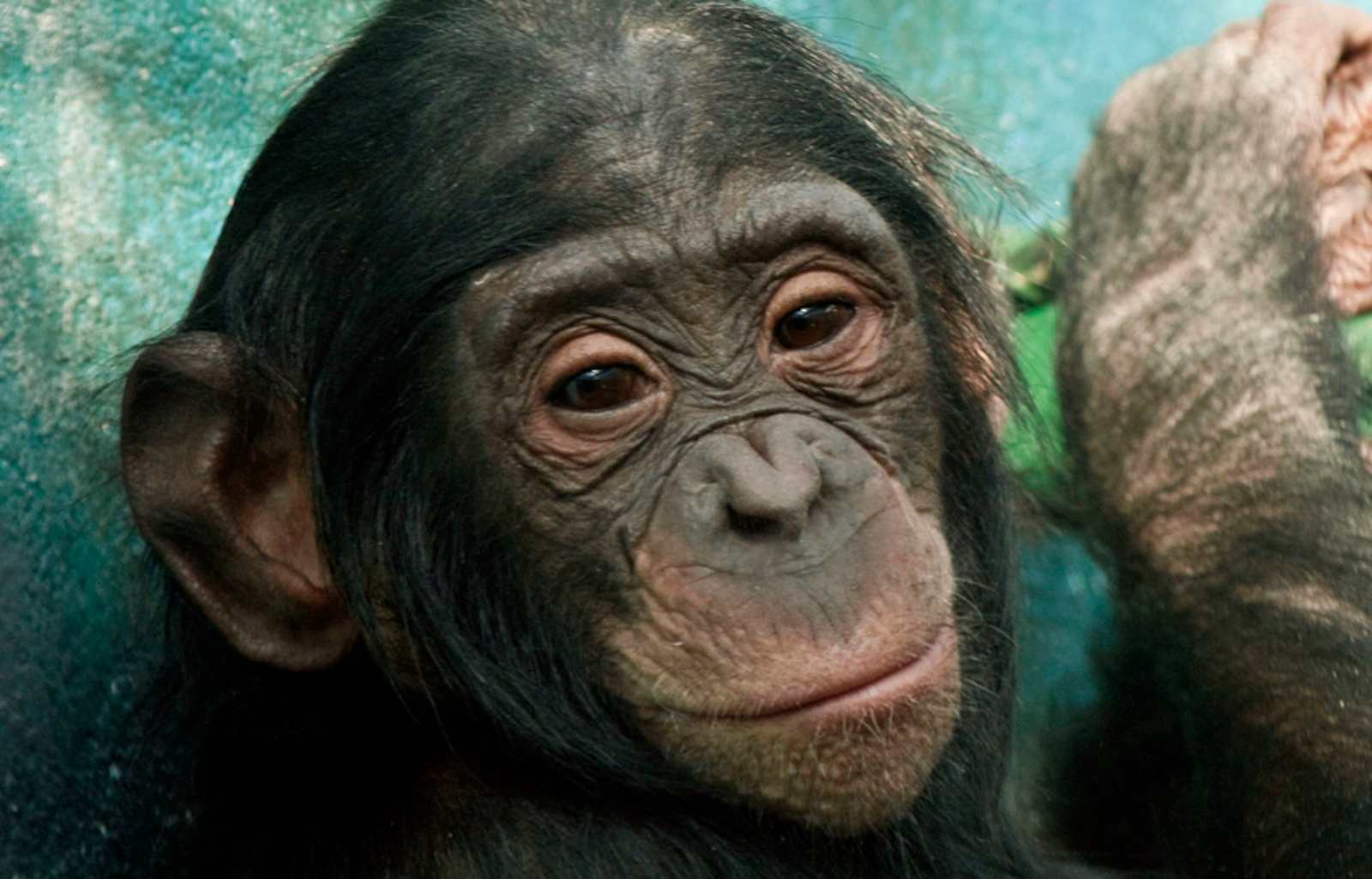 It is a common mistake to confuse bonobos with chimpanzees when, actually, they’re a completely separate species. While they look alike, share 98.7 percent of their DNA with humans, and possess the same profound intelligence and emotional complexity as chimpanzees, the bonobo is far less feisty than its close cousin, carrying a reputation as the “make love, not war” member of the ape family.

Found in forests of the Congo basin in the Democratic Republic of Congo (DRC), much is still unknown about this species, as they weren’t even classed as a separate species to chimpanzees until 1929. What we do know, however, is that bonobos share the same concern as chimpanzees: a dwindling population.

Classified as an endangered species by the IUCN Red List, it’s estimated that somewhere between 10,000 and 50,000 bonobos remain in the wild. With the bonobo’s low reproductive rate and increasing threats, scientists are confident that if trends don’t change, the decline will continue for the next 55 years and ultimately lead to extinction.

Therefore, we must do all we can to help conserve our closest living relatives, but before we can, we need to understand precisely what threats are leading to the demise of the gentle and loveable bonobo. 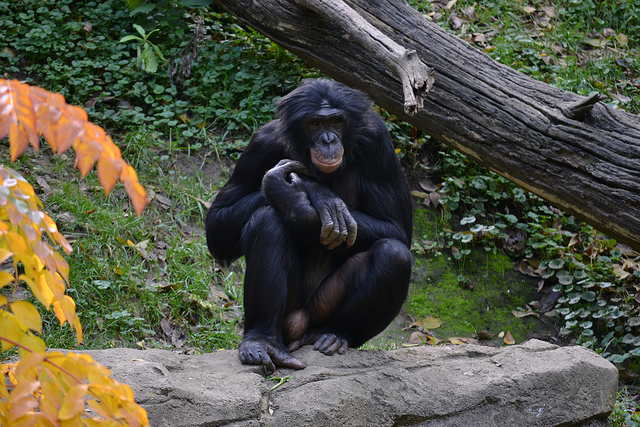 The Bonobo and Us

The fact that bonobos share all but two percent of the same DNA as humans is hardly where the similarities between these primates and us end. Studies have found that young bonobos and children regulate their emotions in nearly the same way and have a similar capacity for empathy and compassion. Conversations surrounding what separates humans from other animals typically hinge on the fact that animals lack the ability to feel, comprehend their emotions, and react in a measured manner like humans do. However, researchers have found that bonobos can understand their emotions and provide comfort and consolation for others once they have been shown similar kindness themselves. 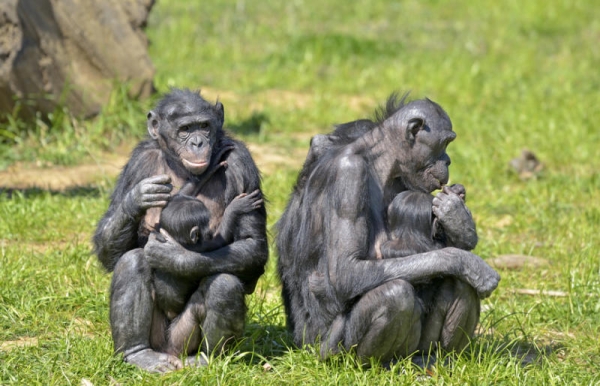 Unlike chimpanzees that learn to share but will eventually outgrow their willingness to do so, bonobos are notoriously unselfish. In one experiment, researchers left a bonobo in a room with a pile of food and gave them the option to keep it all to themselves, or open a door to let one of their friends in, invariably, the animals always chose to have their friends join in. These primates are also affected by “contagious yawning,” which is seen as a more subtle, but also powerful expression of empathy.

Many of the secrets of human kindness and how we develop the ability to care about and interact with our peers have been discovered and advanced in observing the incredible bonobo population.

In addition to their emotional capabilities, bonobos have also demonstrated the ability to turn their thoughts into language and have a wide and detailed vocabulary – especially when it comes to snacks. In one amazing test of the bonobo’s ability to translate their thoughts into different forms of communication, a bonobo named Kanzi was put in a room next to another bonobo and told that he would be given yogurt to eat by way of a lexigram symbol for the word. He was then asked to tell his friend in the other room that there would be yogurt – he vocalized this to the other bonobo, and when she was asked what food they’d be getting, she selected the yogurt lexigram.

Previously, it was believed that humans were unique in their ability to communicate and command language in addition to showing empathy. The bonobo shatters all of these preconceived notions and proves that our assumed superiority to primates and other animals is nothing more than an idea.

Sadly, despite the fact that bonobos are so strikingly similar to humans, we are still responsible for their destruction. After years of poaching, war, and habitat destruction, bonobos may be just a few decades away from disappearing from the face of the earth, and human activities are chiefly to blame.

Humans hunt bonobos to eat as bushmeat, to keep them as pets, and for use in traditional Chinese medicine. While the number of bonobos killed through poaching is unknown, the huge quantity of bonobo charms available throughout the Democratic Republic of Congo implies that the poaching of bonobos is common.

Another contributor to the diminishing of this species is civil conflict. Gangs of poachers have been known to invade Solanga National Park, one of the few protected areas for bonobos, which had led to many bonobo deaths. To make things worse, the military openly permits the hunting of bonobos, and this is definitely not helping in the conservation of this endangered species.

For bonobos outside protected areas, things are even more depressing. Due to an ever-growing human population combined with commercial agriculture and logging, these animals are quickly losing their homes. Destructive logging and agricultural practices are stripping down trees, damaging soils and ultimately, tearing down bonobo habitat. Scientists predict that by 2030, nine percent of the country’s forests could be wiped out. Road building is another contributor in forest destruction and the bushmeat trade, as it provides access for poachers into previously desolate, isolated areas.

Our sibling species is in grave danger of extinction from hunting, habitat loss, and civil warfare. Unless we act now, this species will be wiped off this planet! These primates are our closest relatives and represent a link in our own development that is still only in the first phases of comprehension. As we learn more about the bonobo, we learn more about ourselves. We must do all that we can to save this amazing species and treat them with the empathy and respect that they so deserve.

Organizations like the World Wildlife Fund and the Bonobo Conservation Initiative (BCI) are doing all they can to help preserve this extraordinary species by providing training and equipment to anti-poaching groups in Solanga National Park and other protected areas, to combat poaching. But these organizations need your help in order to combat the threats against bonobos.

You can help these endangered primates by making a contribution to the Bonobo Conservation Initiative, an organization dedicated to protecting bonobos. Or why not sponsor a bonobo as a gift for a friend or relative this holiday? Alternatively, use your skills to benefit bonobos! Are you talented at writing, designing, creating presentations or mapping? If so, volunteer at BCI today and make a difference for bonobos using your interests and talents.

Finally, don’t forget to spread the word. You have the power to make a difference – remember that!