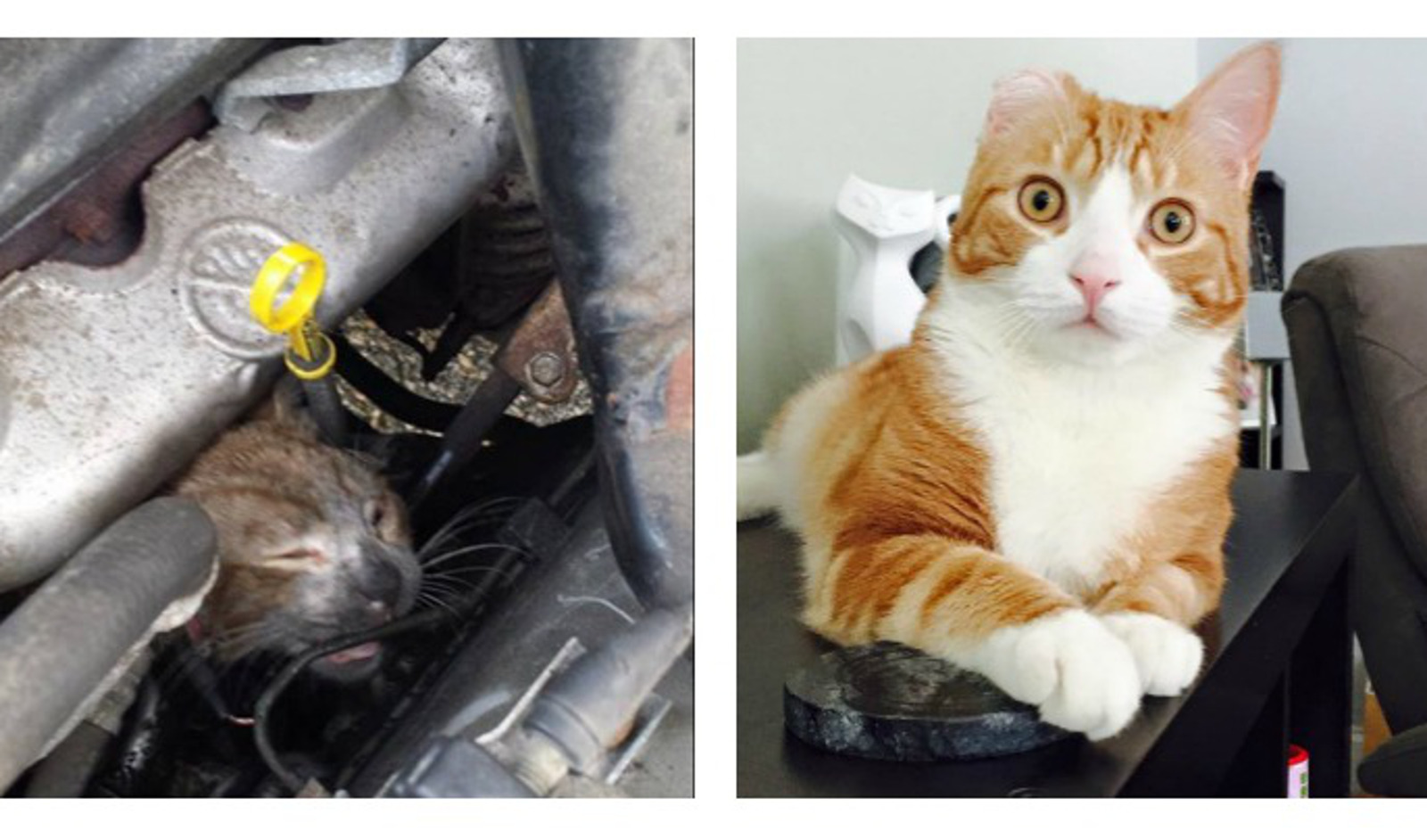 As animal lovers, it can be hard to fathom how another person could intentionally harm an animal. We see these animals as living, breathing beings who are just as capable of understanding their pain and suffering as we do, but sadly, this is not the case for everyone; animal abuse and neglect runs rampant in the United States and across the world. Hearing the stories of animals who have experienced this abuse can easily make you lose hope in humanity and feel like fighting to protect animals is a losing game given all the cruelty that still occurs. Which is why we think it is so important to remember that for every sad story we hear about animal abuse, there is always one (if not more!) positive story where kind people step up to help animals who have been victims of abuse.

It can be difficult to feel discouraged, but it is more important than ever that we continue to help the world’s many animals who need us. The 10 animals who are featured in this post are shining examples of how a little bit of kindness can go a long way. These animals have overcome the odds to find health, happiness, and forever homes thanks to a few kind people. Break out the Kleenex (some of these are tearjerkers)!

Read ’em and weep, my friends. Just know that they do all have happy endings!

Trio Animal Foundation
This lucky boy might look great now, but when he was rescued, he was literally skin and bones.

Barkley was rescued by Trio Animal Foundation in Chicago last August. He weighed only four pounds and his fur was so matted and thick that it was covering up toenails embedded in his ear, dried pus, oozing sores and layers upon layers of dead skin tissue. His injuries were severe, but after months of hospitalization and some initial treatment involving pain medication and antibiotics, Barkley recovered and was adopted into his forever home! 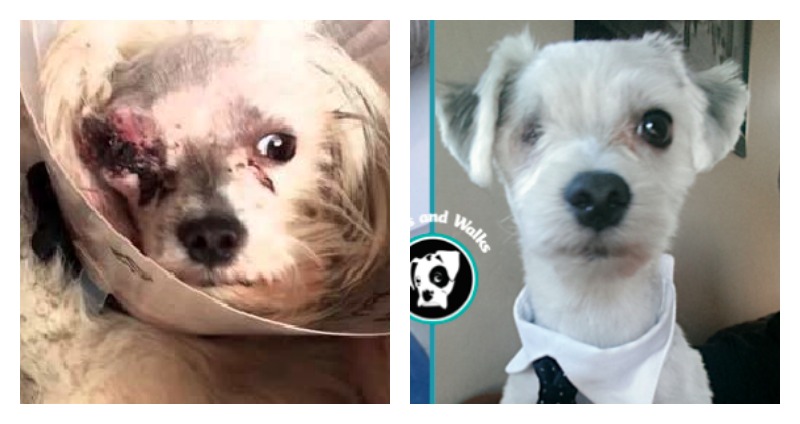 Sam was abused for years by his original owners, but thankfully, Wags and Walks in Los Angeles took Sam from his abusive owners and gave him the medical care he needed. Unfortunately, involved removing his right eye in a life-saving surgery. Although he had a really rough recovery from that operation, he managed to grow in strength and vitality. Now, he is a loving and adorable boy who just found his forever home in April of this year. 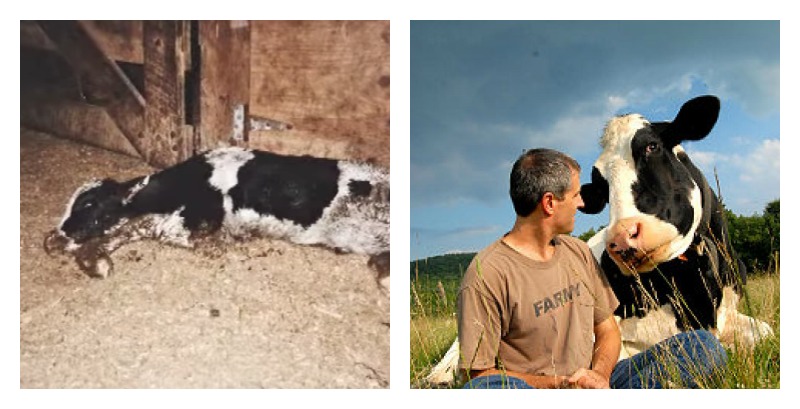 Opie was a rescued cow who lived at Farm Sanctuary in Watkins Glen, New York for almost 20 years. Opie was only a few hours old when he was ripped from his mother’s side and left for dead in a stockyard. Lucky for this little cow, Gene Baur, Farm Sanctuary’s co-founder came to the rescue.  Baur took him back home and nursed Opie back to health. As he grew bigger and stronger, Opie eventually became the leader of the Farm Sanctuary herd, a position he held at the sanctuary for 18 years.

Although Opie passed away in 2008, he is still remembered as one of the most beloved farm animals at Farm Sanctuary. 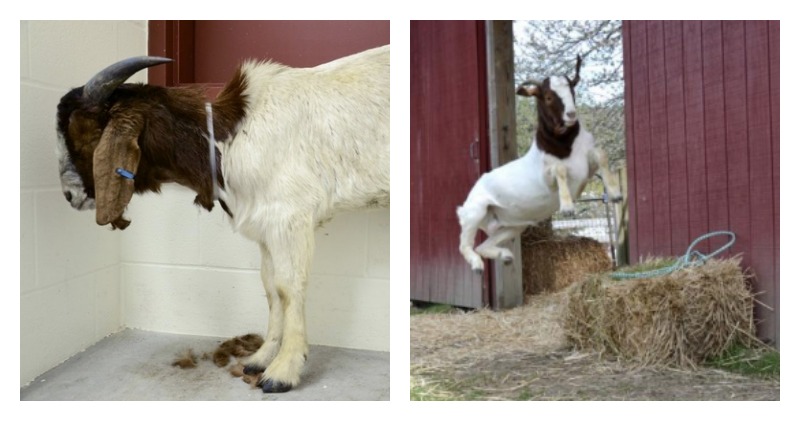 Elliot escaped from one of the worst situations that an animal can find themselves in – a live animal meat market. Determined to avoid this fate, Elliot managed to escape from the market and took to the streets of Brooklyn, New York. A police officer saw him wandering along the side of a road and took pity on the sweet little goat. Rather than returning him to the meat market (Elliot’s ear was tagged with a label that said “MEAT”), the officer contacted Farm Sanctuary in upstate New York. In a matter of days, Elliot was taken away to a life of safety and freedom on the Glen Watkins farm. 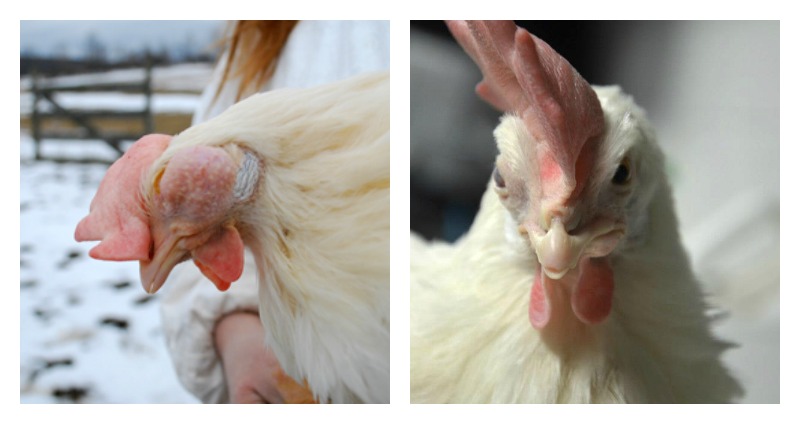 This sweet little bird was rescued from a factory farm with 199 other chickens. She arrived at Farm Sanctuary with a swollen mass and the saddest look on her face that you could possibly imagine. Like the other birds, she was covered with mites and parasites, and all she had ever known was cramped cages, dark and cramped living conditions and monotonous boredom day after day.

Unfortunately, the mass on Butterscotch’s face could not be removed without removing her left eye, too. However, with the eye that she is still able to use, she can see sunshine, fresh grass, and the ample space for her to move around in that she has been given at her new home. 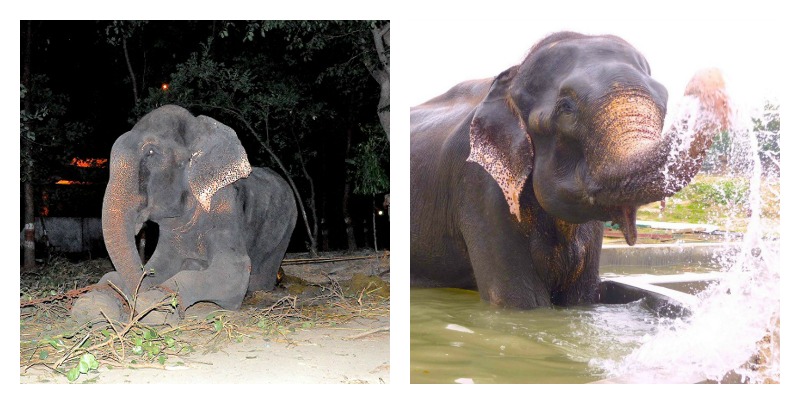 Raju was chained, beaten and treated like a slave for 50 years of his life. Forced to give rides to tourists and live off food scraps given to him by passersby, he lived a life of incredible suffering until Wildlife SOS came along and saved him. Raju seemed to know that the kind souls of Wildlife SOS were trying to rescue him, and as the spiked shackles he was forced to wear 24/7 came off, it is said that he cried, knowing he was finally free.

Although a long, drawn-out court case ensued between Wildlife SOS and Raju’s former abusive owner, the judge presiding over the case ultimately awarded full custody of Raju to Wildlife SOS and the poor elephant was allowed to remain free. Raju now spends his days receiving much-needed medical treatment, playing in his new pool and spending time with his (reportedly) new girlfriend! 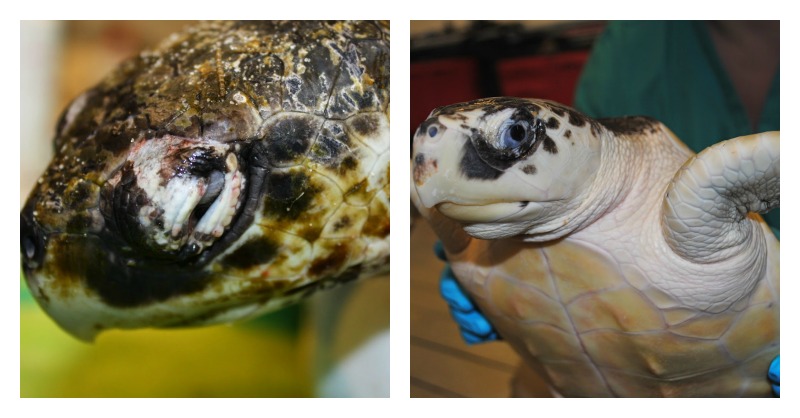 This poor sea turtle, Frankenberry, came to the Marine Animal Rescue Team at New England Aquarium with wounds to both of his eyes. While it’s not clear exactly what happened to his eyes, it was safe to say that Frankenberry needed some good medical treatment and TLC. After being treated for a few weeks with antibiotics and eye medication, he started to see well enough to swim after his food! He and the other turtles taken in by New England Aquarium recovered well enough to be released back into the wild. 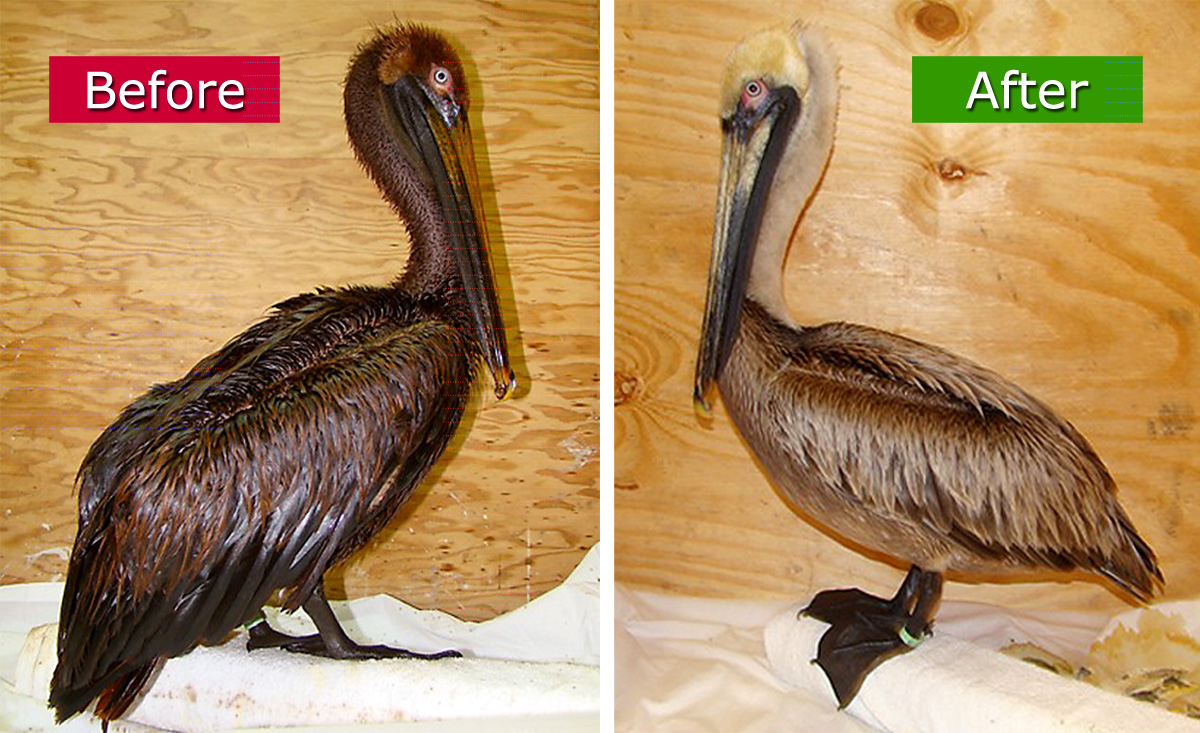 This wild pelican was rescued from the BP oil spill in the Gulf of Mexico in 2010. The oil spill killed or injured an estimated 82,000 birds and countless other marine animals, but fortunately, this guy was rescued by International Bird Rescue in Louisiana.

When oil gets on bird’s feathers, it makes them separate, which exposes the pelican to extreme heat and cold, resulting in either hypothermia or hyperthermia. To get the oil off, the bird will preen the feathers at the expense of everything else – eating, sleeping, avoiding predators – ingesting petroleum-based chemicals that can wreak havoc on their digestive systems.

Thankfully, International Bird Rescue was able to save this little guy just in time so that he could return to the wild. 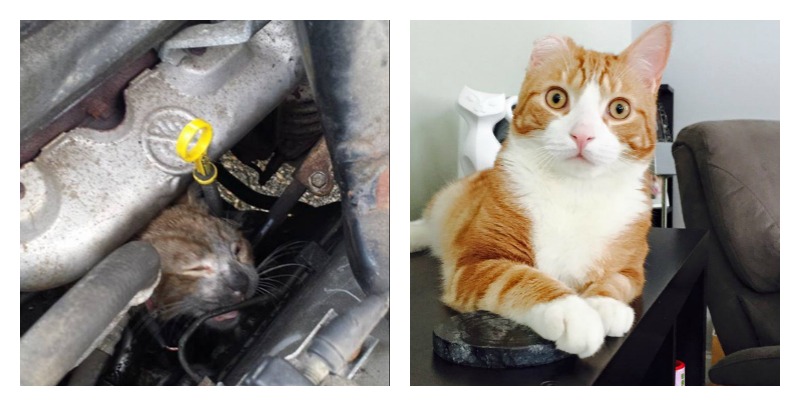 Sweet Mr. Biscuits was a stray kitten when he climbed into the engine of a car, curled up and went to sleep one night. The next morning, the owner of the car came out to drive to work and as the engine heated up, Mr. Biscuits sustained severe burns and may have even caught on fire. Good thing the driver noticed something was up with the steering wheel, and pulled over to check under the hood only to find a poor little cat staring up at him.

The Grannie Project, a shelter dedicated to saving senior cats in the Southeastern region of Pennsylvania, made an exception for Mr. Biscuit (usually they only take in elderly animals) and gave him the medical treatment he needed. He recovered after lots of treatment, and now lives with is forever family.

Meliha was found as a tiny kitten with a horrible eye infection that made her eyes swell and bulge out of the sockets. A few good souls, who found her in such a terrible state, took her in bathed and syringe fed her, trying to nurse her back to health. The veterinarian who started Meliha on her treatment plan told Meliha’s foster family that the kitten’s eyes would probably have to come out. However, over weeks of treating her eyes with eyedrops and ointments, Meliha’s eyes got better and better and the surgery became unnecessary.

While she is now blind, Meliha eventually found a forever home in Seattle, where she lives with her new mom and another special needs kitty. She is in training to be a therapy cat and is spoiled rotten in her new home!