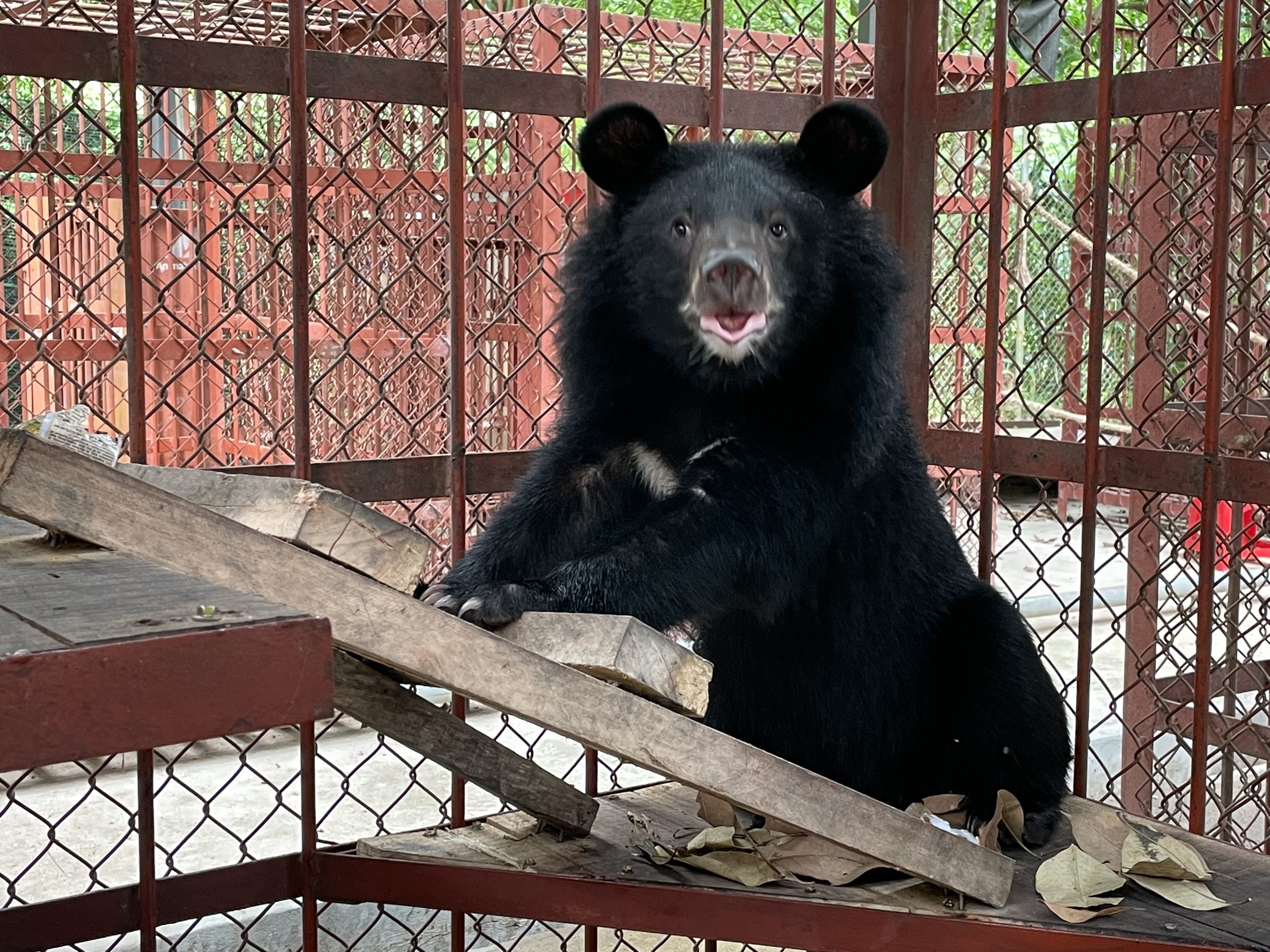 Recently, our Vietnam sanctuary team was contacted by a police officer in the Dien Bien border region of North Vietnam. They had confiscated a bear cub from an illegal wildlife trafficker and asked us to come and rescue them.

The police had been tipped off by Education For Nature Vietnam (ENV) who had been monitoring the traffickers’ movements for a month. They intercepted the trafficker as he crossed the border from Laos to likely sell the cub into bear bile farming or as an exotic pet.

As the cub is so small – around 30kg – it’s also likely she was snatched from the wild and saw her mother being killed as she would have fought fiercely to protect her cub. 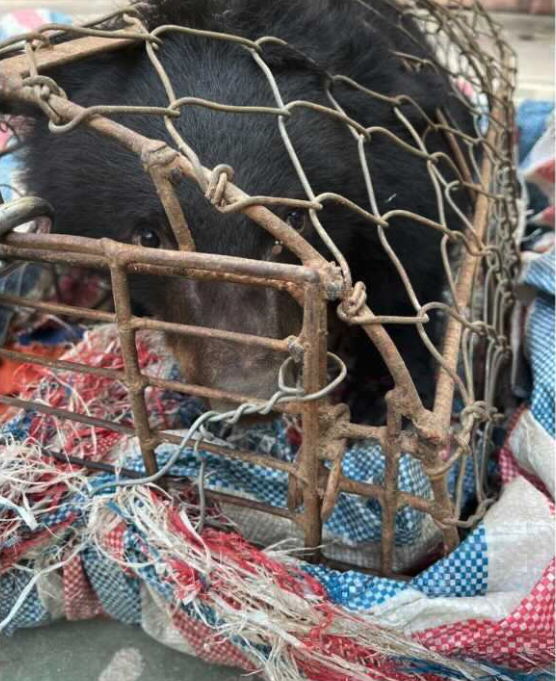 From the heartbreaking video the police had sent of the little bear in a tiny cage, we saw that she has a beautiful, distinctive ‘W’ shaped crescent on her chest. So we have nicknamed this little one ‘Wonder’ because there are many things we don’t know about her.

We wonder where she came from, we wonder how she suffered and what became of her mother. We wonder what would have happened if she hadn’t been saved from an unknown yet certain terrifying fate.

But what we did know is that this little cub would soon be safe in our care, and will never have to suffer and be scared or alone ever again. 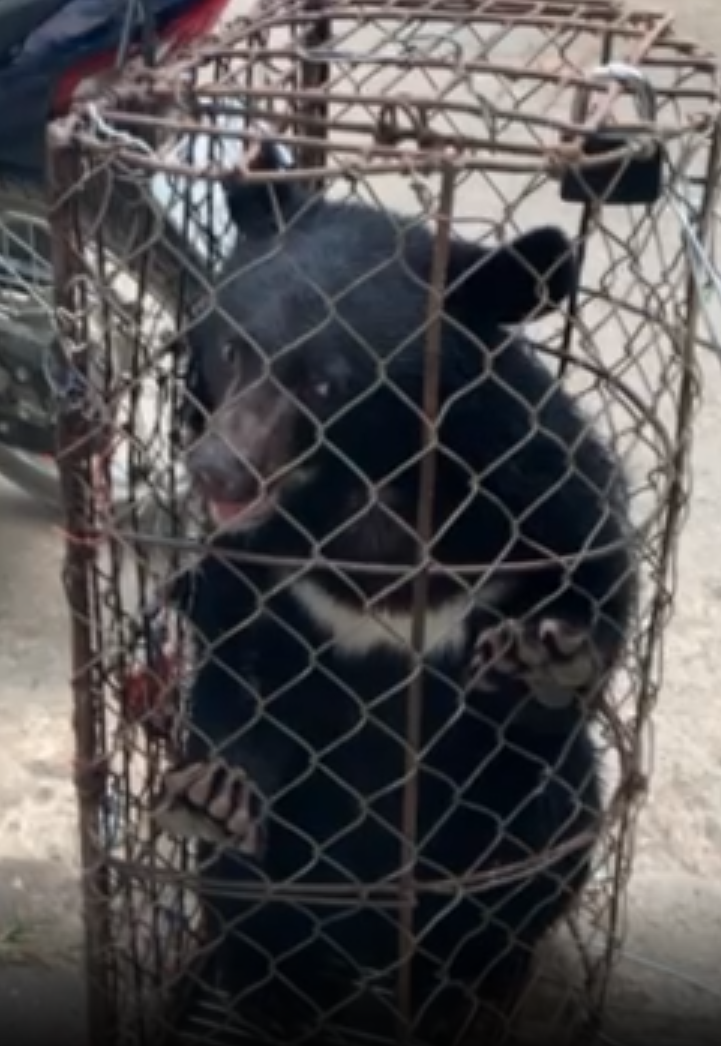 Dien Bien is around 500km from our sanctuary in Tam Dao and travel between provinces is strictly restricted due to the current covid-19 situation, so our rescue team couldn’t rush to go and get the cub as they normally would.

Before our team could even leave the sanctuary they each had to take a Covid-19 test, await the results, and be given the all-clear. They sent our Bear Cub Care Guide to the Dien Bien police to ensure they could take care of the cub until we reached them.

After all members of our rescue team were cleared to travel, they began the long journey to Dien Bien. They had to stop at regular checkpoints to prove they were safe to travel between provinces.

Thankfully, the Dien Bien police had sponsored our journey to ensure it was as smooth and quick as possible. The police are still working to catch the trafficking ring. They’ve informed us they’ll let us know if more cubs need to be rescued. 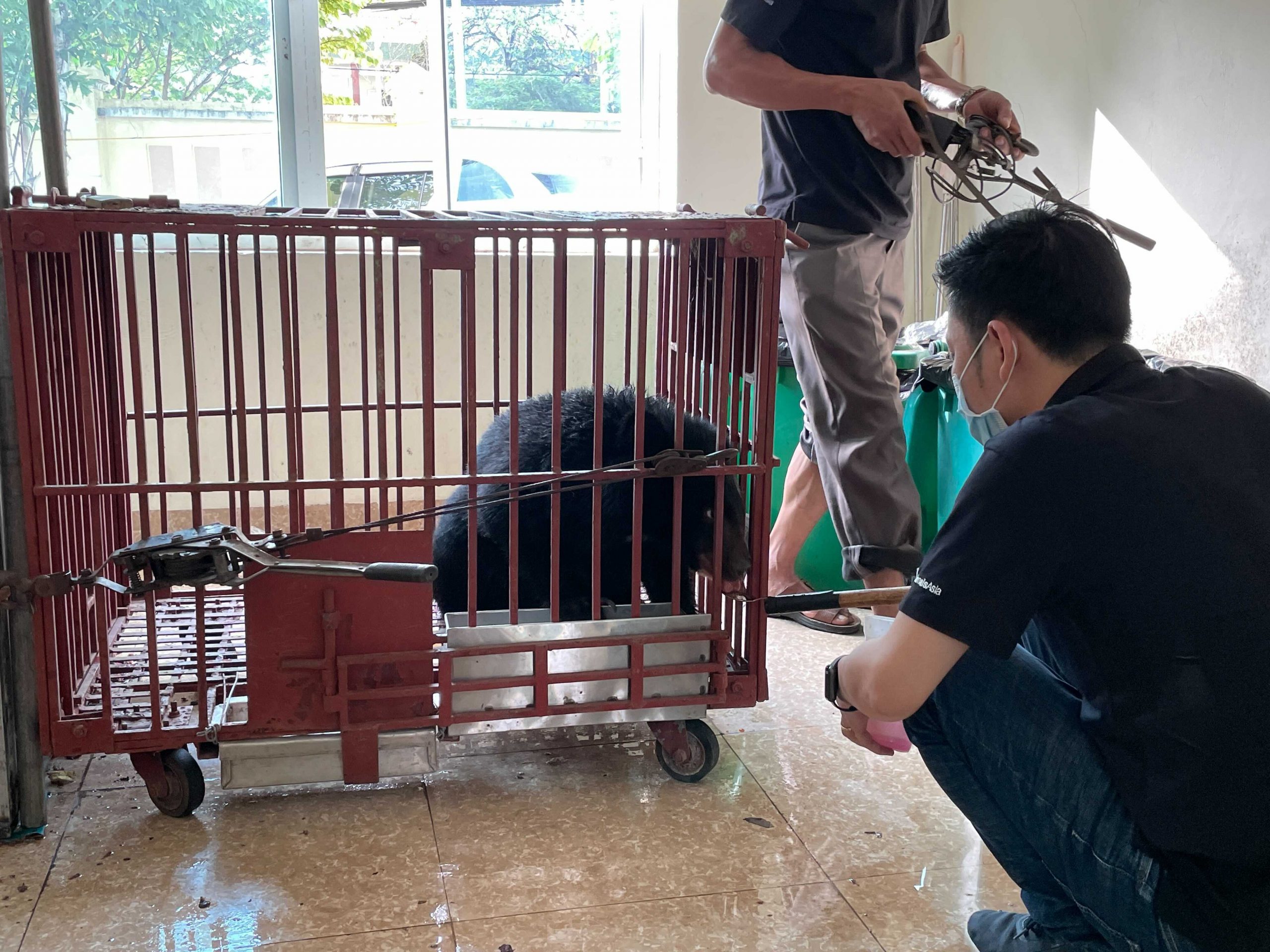 The next day, early morning the Animals Asia rescue team arrived at the police station and went straight to the tiny cub.

Rescue leader and Bear Team Manager, Hiep, immediately crouched down to her level and began talking in a calm, soothing tone as he offered the cub honey and dried fruit on a long spoon.

At first, the cub was understandably nervous at this new person, but soon became more confident as Hiep kept feeding her tasty treats. She even started reaching out of the temporary cage to grab fruit from Hiep’s hand! 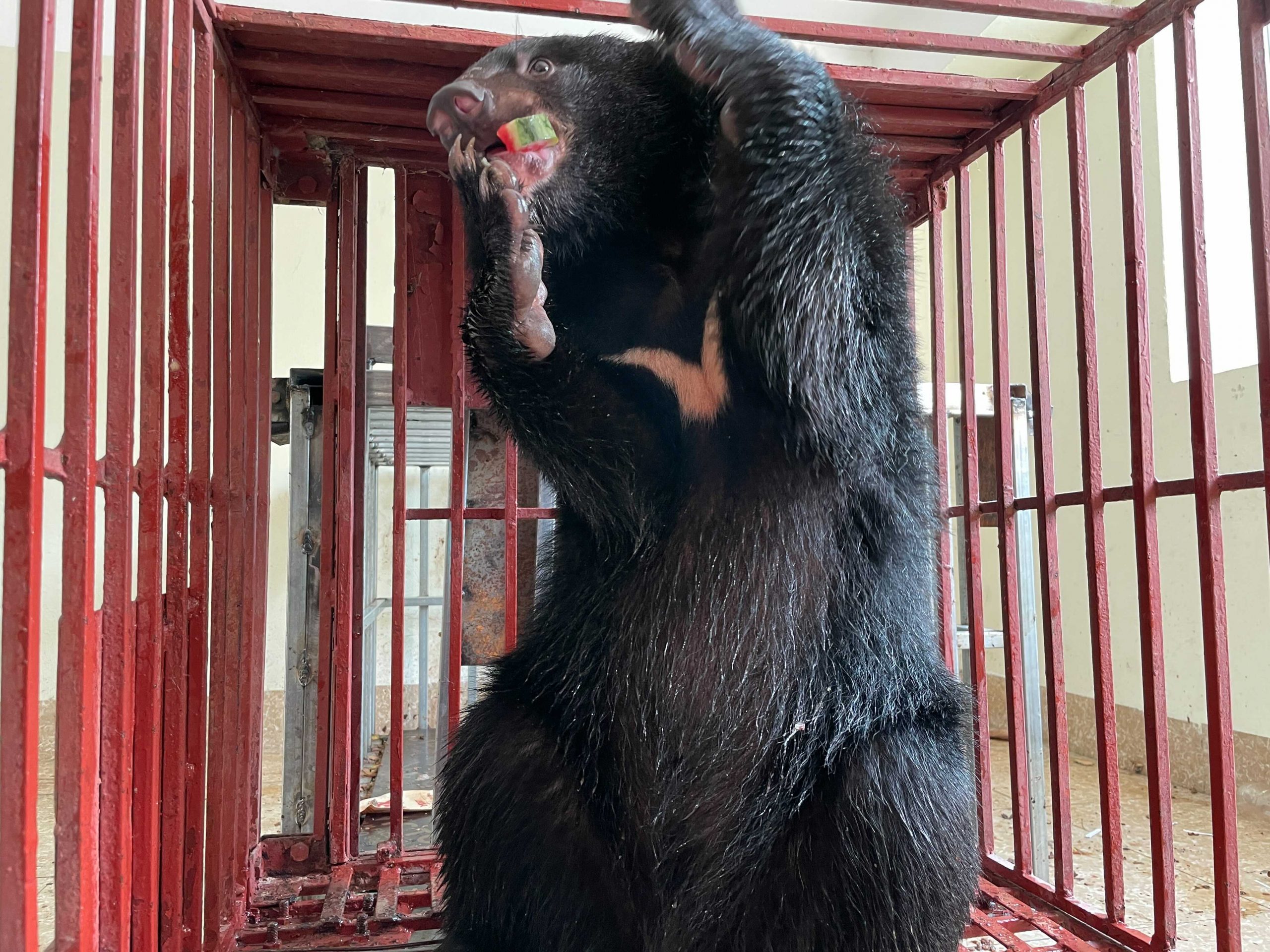 The police had been feeding the cub different kinds of fruit and the cub showed a preference for watermelon, so we will be sure to feed them lots of that in the coming days and weeks.

Moving the cub from her temporary cage, into the transport cage, and onto the rescue van was a smooth and calm process. Hiep kept the cub distracted with tasty snacks and continued talking to them throughout.

Once on the van, the team and police staff chopped down some banana leaves to put in the transport cage for the cub to chomp and curl up with on the journey home. She was also provided plenty of lovely fresh fruit and water.

After around seven hours-long road trip, the team and cub arrived safely at our sanctuary where the cub was taken to have an initial health and gender check. Our team has found out that Wonder was a girl!

Wonder currently is under 45-day quarantine at our temporary area to protect all of the animals from any infectious diseases. The quarantine period is also an essential part of the bears’ integration into sanctuary life. Because the bears we rescue have spent most of their lives in small cages, it is imperative that we don’t shock or scare them by giving them access to lots of open space right away.

So for Wonder’s first 45 days at the sanctuary, she’ll stay in a temporary cage where she’ll receive round-the-clock care including lots of healthy food and snacks, an abundance of enrichment items, and lots of love and attention!

After this essential quarantine period Wonder will begin to be able to get a feel for the real wonders of sanctuary life; stepping outside, making new friends, foraging for treats, and being cared for with the kindness our supporters make possible. 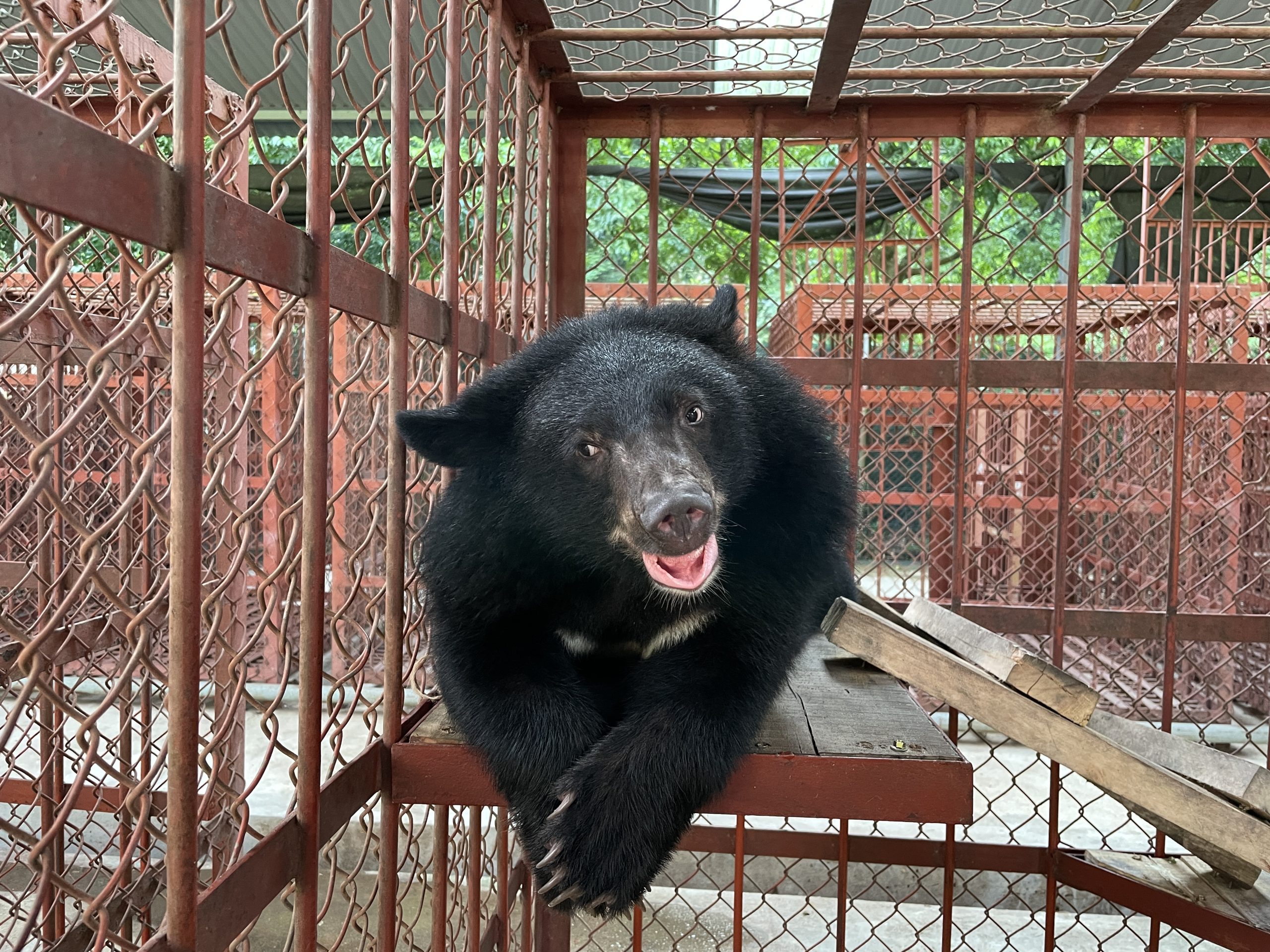 On her first days at Animals Asia’s Vietnam sanctuary, Wonder seemed nervous and exhibited many stereotypic behaviors often seen in captive animals. After just a few days with us, Wonder’s curiosity got the better of her and she started to accept enrichment items from her carers.  The carers’ relief and joy were palpable as they watched her dive in to investigate the wonderful new things around her. In no time she was throwing herself around with abandon as she delighted in the new tastes, sounds, and textures of hessian sacks, banana leaves, tube feeders, and – a moon bear favorite – the water hose!

She also started to eat, drink and sleep better. However, one of her carers Phuong, who is a mum of two children, noted that “Wonder is a typical child, she is much more interested in new toys than food!”

She is slowly getting used to her new environments and is enjoying a better life. There will be many joys waiting for her in the future.

We are confident that Wonder will grow into a confident, happy, and playful bear which is a testament to the unwavering patience, love, and dedication of her carers.  But as with many rescues we undertake, Wonder’s was bittersweet. We know that there are wildlife traffickers still out there, snatching cubs from their mothers in the wild to be sold into terrifying situations.

The man who was arrested for trafficking Wonder was part of a trafficking ring. Although he will face the prospect of a fine and prison sentence, his wider network is still active. The Dien Bien police force who intercepted the trafficking operation and recovered Wonder is actively working to catch the gang responsible.

With heartfelt thanks to all our supporters, everyone who has donated to help rescue this little bear, to the Dien Bien Police for their quick thinking and commendable actions, and to ENV for their efforts in monitoring and exposing the trafficking operation.

To help this little bear heal from her traumatic past, please donate to Animals Asia today.