Big Cats are Not Selfie Props! Why a Ban Against Contact With Captive Cats Is Needed … NOW

Getting a photo with a tiger is something that most people can only dream of doing. While you might think this is something that can only be achieved on safari through the African Savanna, big cat photo opportunities are actually extremely common right here in the U.S.

According to the International Fund for Animal Welfare, there are an estimated 10,000 big cats, including lions, tigers, and leopards, living in roadside zoos, backyards or basements in the United States, many of which are put on display for profit. These facilities offer the public the unique opportunity to interact with big cats in ways that most large, prominent zoos don’t offer, like the chance to feed a cub or take a “selfie” with a full-grown big cat.

While a picture may last a lifetime, sadly, so does the abuse and neglect that these animal endure behind the scenes at the roadside zoos and facilities that offer these once in a lifetime opportunities. In addition to the harm done to animals in these facilities, there are also very real health and safety concerns involved for the people who partake in these photos. The deeper you look behind the photo, the more it becomes clear that this sort of interaction between big cats and humans is everything but cute and cuddly.

Where do all These Animals Come From?

There are currently more tigers being kept in captivity in the U.S. than there are in the wild. Big cats, like tigers, are not native to the U.S., which presents the interesting question of how these wild animals came to live in suburban settings.

The reality is, many are taken from the wild at incredibly young ages and sold through the wildlife trade, while others are bred in captivity and sold to exhibitors at exotic animal auctions all across the United States. According to the International Fund for Animal Welfare, “Private possession and breeding of prohibited wildlife species contributes to the interstate traffic in those species and may contribute to illegal international wildlife trade…There is no way to know how many U.S.-born big cats are disposed of or when their parts are illegally sold into black market trade.”

The illegal wildlife trade is an incredibly lucrative business that perpetuates the poaching of wild animals for the sake of profit. 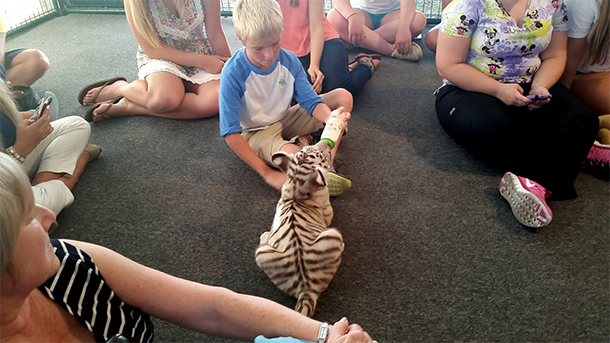 Although the U.S. Department of Agriculture regulates the public exhibition of wild animals, public contact with wild animals is not actively monitored.

This means that the fate of wild animals is primarily in the hands of their handlers, many of which are not properly trained to care for the dietary, mental and physical needs that these complex creatures require. Roadside zoos and animal exhibitors tell the public that the big cats in their care have been “domesticated” because they were hand-reared by humans. In this manner, they create the façade that the animals are naturally docile or content with interacting with humans, when in reality, they are usually heavily sedated or beaten into submission to ensure their cooperation.

With little regulation in place to protect the animals from this sort of abuse, their treatment is largely uncontrolled allowing exhibitors to further exploit them. 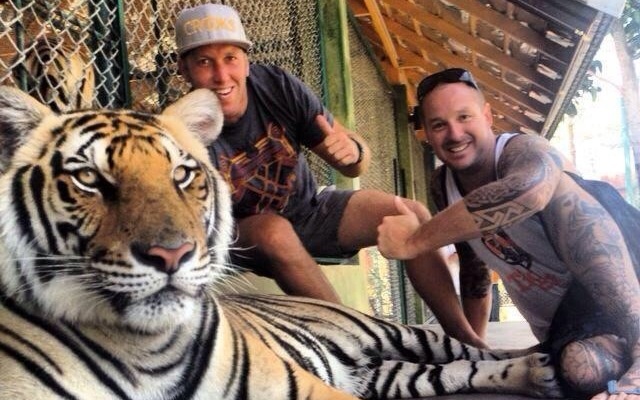 According to Born Free, the U.S. Department of Agriculture (USDA) guidelines state that public contact with big cats between eight to 12 weeks is authorized, however, any interactions with adults is prohibited. The Humane Society of the United States has uncovered evidence that at least 70 exhibitors in 25 states currently or recently engaged in the harmful practice of allowing the public to handle big cats which included interacting with mature cats.

Interactions with both cubs and adults run the risk of injury to untrained handlers. In the past two decades, dangerous incidents involving captive big cats have lead to deaths of 24 people, five of which were children. In addition, a reported 200 other people have been mauled or injured by big cats.

While cubs may physically be less dangerous than their adult counterparts, they can carry zoonotic diseases. Young cubs do not have fully developed immune systems and when they are placed under the stress of being handled by humans, they become even more prone to contracting diseases. An undercover investigation from the Humane Society of the United States found tiger cubs at one roadside zoo facility were infected with coccidia and giardia, both of which can be passed to humans through contact. Ringworm is another common concern associated with handling tiger cubs. Although both of these diseases can be found in domesticate animals, handlers at roadside zoos do not inform visitors of the potential health risks.

You Can Help Big Cats!

In 2014, New York State banned direct contact between the public and big cats. Further, any animal exhibitor not in compliance with the law is subject to a fine. Currently, New York is the only state to prohibit direct contact with big cats.

Other states have laws regulating the private ownership of big cats (and other wild animals) and the standards of care for them, but there are no penalties for attractions that allow the public to pose with them for a picture. In April 2015, The Wildcat Sanctuary submitted a letter to the USDA Secretary Tom Vilsack requesting that the USDA consider a nationwide ban prohibiting direct contact between the public and big cats.

Given the threats to both animals and humans alike, it is clear that legislation is needed to protect all parties involved. New York’s ban serves as a model for other states to take action, but a nationwide ban is needed if we hope to phase out the use and abuse of big cats for frivolous exhibits in the near future.

Please urge the USDA to consider creating a nationwide ban that would stop animal exhibitors from profiting off of exploited big cats! Together we can keep big cats out of backyards and in the wild, where they belong.